an embodiment and exploration
of the dreams, loves, and desires of Sor Juana

Created by the Ensemble:

New Spain was a colony of Spain and “society was organized hierarchically, on the basis of race and birthright; which is to say that any person who was not a man was discounted from this hierarchy. Women were relegated to the home, court, or church where they were held to expectations that forced them to be demure objects. Sor Juana’s positionality as an illegitimate criolla woman of Spanish and American-born Spanish descent put her in opposition to the male-centric world around her. She found freedom in words; books “were her lifelong passion and her best, most loyal companions…they were instruments of knowledge and control devised by humankind to make order from chaos. She begged her mother to let her dress as a boy to attend university and she would cut her hair as an incentive to study and learn quicker. Her genius flourished regardless of and within the restrictions imposed onto her. From 1664, Sor Juana spent time in the court where “her cleverness, intelligence, and beauty made her an instant sensation. After her “celebrity spread far and wide, ​ Marquesa de Mancera took Sor Juana into her service where she wrote many sonnets and other poetry that give us an opportunity to revisit and revise understandings of sexuality in 17th century colonial Mexico. In 1669, SorJuana entered into a convent, and “she became somebody altogether different.”​ In her Response to Sor Filotea, she writes “I deemed convent life the least unsuitable and the most honorable I could elect if I were to insure my salvation.​  There Sor Juana was able to study, write, and enjoy life comfortably removed from the pressures of the court or of the home.

Doña Ana’s brother, loves Doña Leonor; Don Juan pursues Doña Ana; while Castaño and Celia are playing games. Confusing? Yes! H​ouse of Desires ​tells a story of female desire, liberation, and intellect; subverting traditional hierarchies of power. Sor Juana wrote about “appearances, contrived and authentic…hypocrisy and pretense, with mirrors and original models, with the shallowness of social behavior and the vulnerability for women to male demands,”​7​ themes that are present throughout the Baroque period of drama. Sor Juana’s life itself is reflected in the character of Doña Leonor. Both are plagued by the “existential dilemma…where female beauty and intellectual talents meet. Fueled by this source text and characters, we’ve explored questions and notions of desire, identity and connection.

We asked our student performers and designers a few questions on the glories, challenges, and discoveries of our devising process.
Here are some responses:

“This process has been about using the text to find me rather than what the text is saying on face-value. The text is a container and I have found freedom inside of it to explore.”
“I have been able to bring parts of myself to the work.”
“Devising during a global pandemic has made the space more collaborative.” “Everyone’s been craving creativity, so we come in with excess creative energy. There is not a lot of empty air.”
“This process has allowed me to be creative and resourceful in a more natural environment. Working with such technical constraints, but a flexible vision has given us some unique lighting opportunities and ideas.”
“I’ve enjoyed the ability to explore Sor Juana and her life rather than just the characters in H​ ouse of Desires.”
“We’ve had to create intimacy without physical touch or contact. We’ve found a lot in tension and stillness.”

I have long loved the work of Sor Juana Inés de la Cruz. I have admired Cruz, her work, her life and her legacy for nearly two decades. I have often proposed to direct C​asa de los Empeños.​ Here is a play that unabashedly celebrates intellectual, healthy, funny,

desiring and desirable women. Given the contexts of the play’s composition and performance; the oeuvre of Sor Juana’s work (including, but not limited to ​The Divine Narcisuss a​ s well as her triumphal arch, twinned to that of Sigüenza y Góngora); and the perpetual iterations of Sor Juana herself as icon-cipher-talisman. . . . this play slyly asks us to continue to revisit what we think we know about gender, power, sexuality, race, colonialism, and history in (and via) 1680s Mexico City.

The play belongs to the female characters. The play is also motored by desire: woman-centered desire, queer desire, genderqueer desire, female hetersexual desire. These desires best the plans of the male characters. These desires are more powerful than any plot. Simultaneously, Cruz’s writing—lauded by Cruz’s contemporaries and present scholars alike “as just as good if not better” than the writing of male playwrights Cervantes and Lope de Vega—demonstrates mastery of form while simultaneously writing (as de Lauretis might say) around, beside, and through patriarchal style, genre, form.[​ i]​Cruz does not just best her models. She turns them around and inside out. In the end, the male characters are stripped of patriarchal power, and yet—a testament to Cruz’s visionary intellect—Cruz allows select male characters to step out of the patriarchy, to admit defeat, to step aside, and to (possibly) collaborate on new structures.

Though ostensibly set in Toledo, the site of the play’s composition and performance, the viceregal palace of Mexico City in the late 17t​ h​Century, demands that we revisit what we think we know about the Americas. Scholars of Baroque “New Spain” recount the wonders of Mexico City as a capital that rivaled and surpassed any in Europe for its beauty and richness in scholarship, culture, and aesthetic, for its colleges, art, architecture, bookshops, flowers, and silks.​[ii]​ Mexico City in the 1680s was a cosmopolitan city and a Dimockian hemispheric city.[​ iii]​ That is: 1680s Mexico City illustrates Dimock’s call to consider the hemispheric as a vector that pulls not only South -North but East-West as well. As Morales and Gordon write, “The Chinese presence in Latin America is usually portrayed as a relatively recent phenomenon. Yet

Mexico City already had a Chinatown as early as the 1600s, thanks to the Manila galleon or n​ ao de China​ — a trans-Pacific trade route from Manila to Acapulco that would profoundly shape the Americas over the course of two centuries.”[​ iv]​ At the same time, 1680s Mexico City and the work of Sor Juana also unequivocally demands we confront the imperial violence and genocide that shaped and shape the Americas. The seeming absence of indigenous history in this play is itself a presence, constellated with and against the writings of Cruz and her contemporary intellectuals, their work illustrating the ways in which emergent criollo consciousness participated in a modernity that was/is always already a modernity/coloniality. In what ways, then, can we leverage performance, history, and text to imagine, theorize, and embody the decolonial? How can the decolonial (theorized) move to decolonization (practice and enactment)?​[v]

The Theater Department had planned to produce ​House of Desires,​ translation by Catherine Boyle, in Fall 2019, with me as director. Due to the global pandemic, we suspended that plan. Yet, Cruz persisted with us. The student assistant directors and dramaturgs inspired me to make something; student designers, faculty designers, and actors eagerly and with great artistic generosity and skill, joined us. The Tang agreed to host us.

The presentation you will experience is the product of our collaborative exploration of the ways in which the play, Cruz, her life and legacy, intersect with our present moment and selves. It is both a beginning and complete in and of itself. The text inspired and moved us, as did Sor Juana, her life and times. We worked, intentionally, with very few resources, making our choices all the sharper, our reliance on gut and heart all the more valuable. Some of what you will see tonight, we may also be experiencing for the first time. I think of this one presentation as a thoughtful feast, gifted to loved ones to enjoy, full and complete, yet singular. The kind of feast that leaves you both satisfied . . . and looking forward to the next time.

We have attempted, in our explorations, to surface the hemispheric and the decolonial in design, performance, and theory. The presentation, here, is not the end for us. For the rest of our semester, we will engage with a critical reflection around the questions I have raised here. What have we learned? Where have we faltered? What can we do differently next time? I hope we ignite your curiosity as well. 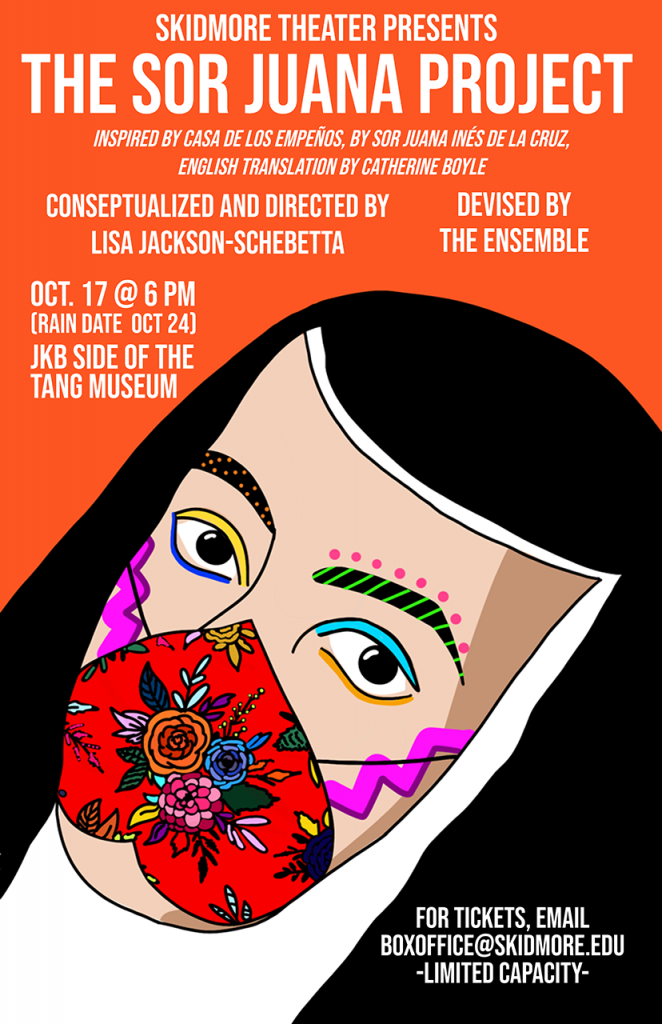