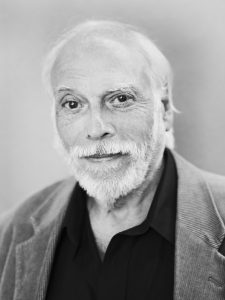 Celebrating over fifty years as a theater professional, Opitz has been actor, director, playwright, designer, producer, stage manager, technician, and consultant on countless productions throughout the world, including Broadway, Off-Broadway, academic and regional theaters. His designs were seen in New York City, throughout the United States, and in 30 countries, including many world premieres with renowned choreographers for the José Limón Dance Company. Acting performances include If All the Sky Were Paper and an Off-Broadway production of What I Heard About Iraq. He’s had featured film roles in Disoriented and The Damned McMarters and can be seen in Seabiscuit, The Skeptic, and a documentary of What I Heard About Iraq. His many Shakespearean roles include King Lear (2019), Falstaff, Shylock, Polonius, Duke Senior, Duke Frederick, Porter, Duncan, Scottish Doctor, Sir Toby Belch, Marcus Andronicus, Gremio, Friar Lawrence, Duncan, Peter Quince, Aegeon, and Gonzalo. Mr. Opitz designed and consulted on many performance facilities including Capital Rep’s Market Theatre, the Empire State Performing Arts Center, Queens Playhouse in the Park, Saratoga BOCES, and the Janet Kinghorn Bernhard Theater. Opitz was an editor for Theatre Crafts Magazine, a national periodical dealing with theater design and technology. Directing credits include Julius Caesar, Romeo and Juliet, Macbeth, The Comedy of Errors, Blood Relative, The Threepenny Opera, RAB, Arcadia, Ajax in Iraq, If All the Sky Were Paper, Love’s Labour’s Lost, Love Letters, Almost, Maine and his own plays Woyzeck in Auschwitz, Bloomsday: 16 June 1904, The Trial, and Kafka’s Metamorphosis: A Slapstick Tragedy. He and Barbara Opitz developed The Skidmore Shakespeare Programme, a respected study-abroad program in London. Opitz is professor and former chair of Theater at Skidmore College. A founding member of  The Saratoga Shakespeare Company, he has been the producing  artistic director of the company since 2012. He is a proud union member of Actor’s Equity, United Scenic Artists LU#829 (IATSE), the Dramatists Guild, and the Stage Directors and Choreographers Society as well as an active member of the Shakespeare Theatre Association. Opitz has been a rabid Mets fan since 1962. https://academics.skidmore.edu/blogs/laryopitz/