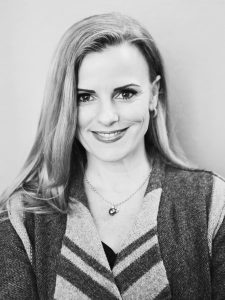 Yvonne Perry was born and raised in upstate New York. She received her B.F.A. in Acting from Adelphi University. While there, she booked her first professional job as the voice of Elizabeth for a series of audio books based on the popular “Sweet Valley Twins” book series. After college, Yvonne moved straight to NYC and was soon represented commercially by Don Buchwald and Assoc. (DBA) Soon she was booking national radio spots for AT&T, Amstel Light and Coty (among many others), and on-camera commercials for products like Hellmann’s Mayonnaise and Suave.

After a summer spent studying with the American Conservatory Theatre in San Francisco, Yvonne began performing as part of the East Coast improv team for Candid Camera – tricking people alongside the likes of comedians Kevin James and Adam Ferrara. After several years dominated by commercial work, Yvonne booked the contract role of Rosanna Cabot on the CBS Soap As The World Turns.

After four years of playing Rosanna – and winning the series’ first Soap Opera Digest Award in 1993, for “Outstanding Female Newcomer in Daytime” – the character was temporarily written off the show and Yvonne left for London to study with the Royal National Theatre. In the fall of 1996, she started making forays into the wilderness of Los Angeles, where she lived off and on for the next two years. Her time in LA was spent auditioning for countless pilots and guest starring roles, as well as several independent films. Although she “went to network” on many projects, her most noticeable bookings were an episode of Silk Stalkings and a sit-com pilot for ABC titled Dads.

In the past few years, Yvonne has been pleased to create a niche for herself as an actress in the Capital District. She has acted in many regional Equity productions with companies like Capital Rep, StageWorks/Hudson, Oldcastle Theatre Company, NYSTI and Hubbard Hall, among others. In 2014, she created the role of “Lisa” in several critically acclaimed productions (Florida, Albany and New York) of Suzanne Bradbeer’s The God Game, now published by Samuel French. At Capital Repertory Theatre, Yvonne also serves as a reader on the selection committee for the NEXT ACT! New Play Festival.

Yvonne has become an active member of Upstate Independents (UI), a solon of independent film makers in the area. Through UI she has developed relationships with many of the best area directors and writers. In the summer of 2015, she will shoot the SAG low-budget short Key Transitions, in a role written especially for her. Yvonne was also a frequent performer, director and producer in the “Movies Without Pictures” screenplay reading series sponsored by UI and the Saratoga Arts Center.

Much of Yvonne’s time is now spent managing her business as a freelance commercial actress. Yvonne can be seen often on TV as the spokeswoman for Taft Furniture and Keeler Motor Car Co. She has been instrumental in launching new campaigns for Sunmark FCU, Kimberley’s A Day Spa, HANYS, CapCom Credit Union, and more. Among her many industrial film clients are the NYS Dept. of Health, TransWorld Entertainment, and EnergyStar. Her expertise with a teleprompter has kept her in demand with area producers. She has professional experience as an on-camera interviewer (“Out & About”), host (“Real Estate Deals”), and print model. With over 20 years of professional experience, her vocal abilities can cover jobs in radio, TV voice-over, narration and audio books on tape. Her specialty in voice work is her ability to make complicated technical material easy to understand. Yvonne recently completed narrating a series of Social Studies textbooks for McGraw-Hill, a video training series for Milady Esthetics, and is currently the HR voice for Pinacle PNC payroll systems.

Yvonne’s consistent work in many areas of her profession has made her a popular guest professor at several upstate colleges, including UAlbany, Siena, Union College and Skidmore Universtiy – teaching classes in Theatre History, Acting, Audition Technique, Marketing for the Performance field, and Acting for the Camera. She is also a frequent guest lecturer at her Alma Mater, Adelphi University. She has directed shows for UAlbany, Siena and Union. . . as well as several staged readings for Theatre Voices.

Although Yvonne still maintains a residence in Manhattan, much of her time is spent at her home in upstate New York with her husband and two daughters.