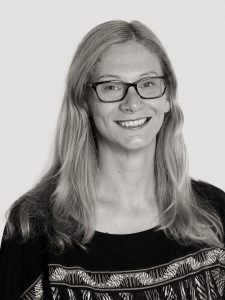 Before moving to the U.S. to pursue a doctoral degree in Performance Studies, Dr. Szucs worked as the resident dramaturg of Vígszínház (Comedy Theatre) in Budapest. Recently, she has worked as production dramaturg at the National Theater and at the Radnóti Theater, also in Budapest. U.S. credits include Merchant of Venice at Portland Center Stage, A Man’s a Man at the Arena Stage in Washington D.C, and Trouble in Paradise and Frequency Hopping produced by the Hourglass Group in New York. Current work-in-progress projects include Marat/Sade and Ridiculous, a play on the first female film director, Alice Guy-Blaché with Hourglass.

As a curator, Dr. Szucs worked on the exhibition “Revolutionary Voices: Performing Arts in Central & Eastern Europe in the 1980s” at the New York Public Library for the Performing Arts, Lincoln Center, “Visual Acts of Radical Care: An Exhibition of Female Artists-Activists from Central and Eastern Europe” at Yale University, and “Insatiabilities” at Performance Studies international (PSi #27).