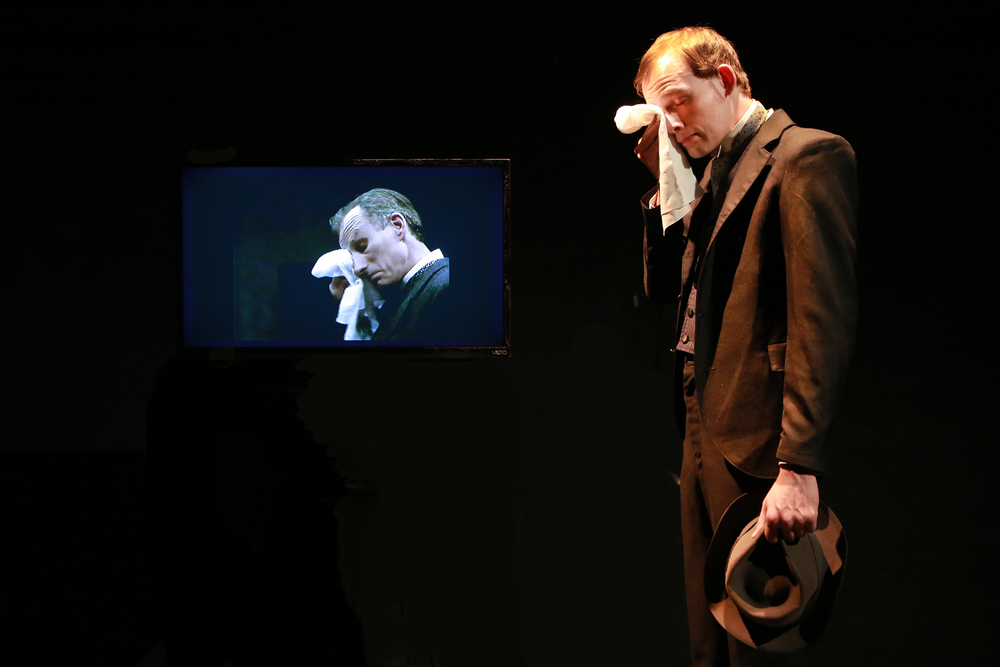 Overlapping Presences in Soltanoff’s Our Town

Our Town, Thornton Wilder’s 1938 Pulitzer Prize-winning play and one of the most ubiquitous shows in American theater, hardly needs an introduction. Its established place in the canon of American theater means it is both well known and, by unfortunate extension, over-performed. It may have caught audience members off guard, then, when director Phil Soltanoff described the play in his program notes as “an edgy, innovative, classic.” However, the statement points to what is usually forgotten among audiences and theater artists alike: Our Town was revolutionary in its time. Choices that were cardinal sins during Wilder’s time, such as having minimal set and breaking the fourth wall, are no longer the radical statements that they once were. And so Soltanoff’s production makes us wonder: What might the fourth wall of the modern day be? What theatrical experience could be equivalently shocking so as to jolt the audience out of their seats in the same way that Our Town did in its day?

While many productions strongly resist imitating a filmed version of the play in question, Soltanoff had every actor lip syncing and moving in perfect unison with a video recording of the 1989 Lincoln Center production, which was projected behind the actors to create a powerful distancing effect. It was a defining element of Soltanoff’s production. 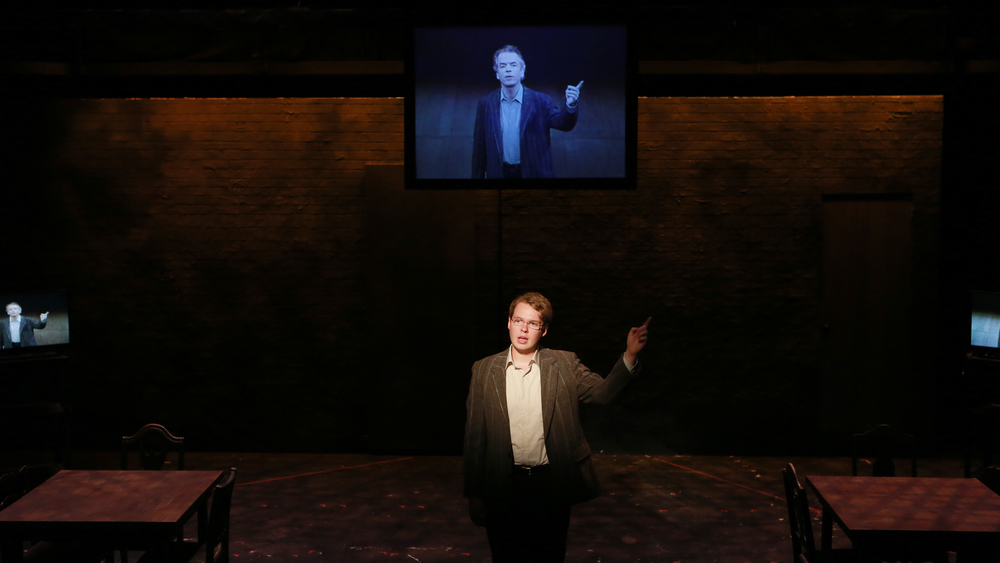 At first, it was difficult not to obsess over the accuracy of each individual actor’s movements in relation to the screen. Then, things started to happen. Two actors were suddenly much further apart than they seemed in the video. My attention was instantly called to the physical presence of these two actors and how, in real life, I had to physically turn my head to see both their faces. From that point forward, I was drawn into what felt like a set of theatrical experiments in which the director, actors, and I were exploring the idiosyncrasies of stage and screen. When an actor in the staged version points directly at the screen but is actually pointing at another actor, is the film misrepresenting the stage version? What happens when the video drops out and two actors are left just speaking to each other on stage? These questions posed to the audience were much the same ones Soltanoff had entering the process. He says of going into rehearsals: “I wasn’t sure what would happen when I put that video with live action. I wasn’t sure what this process of the removal of the video elements would do.” 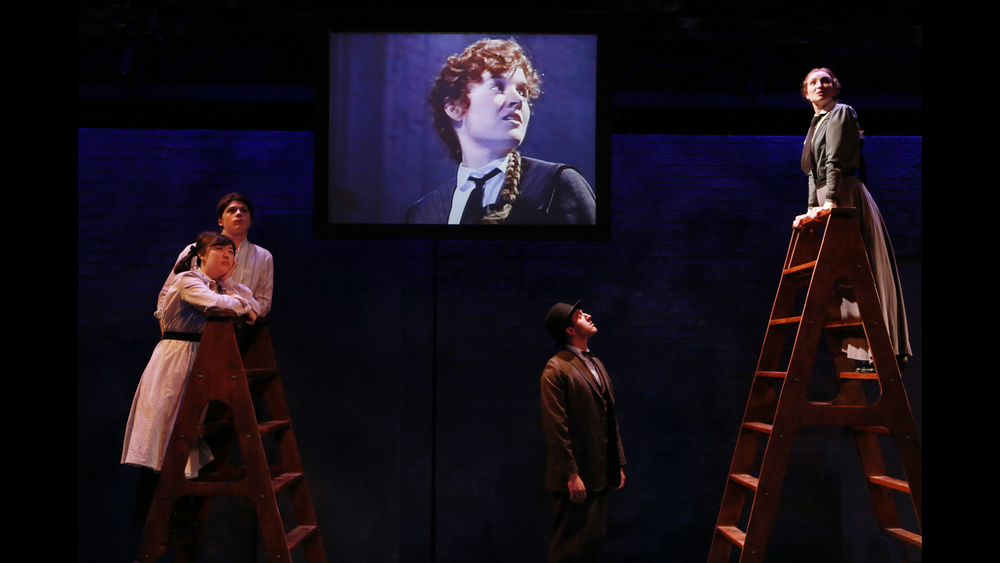 The first two acts of the show demonstrated immense directorial restraint. For the most part, Soltanoff stuck to the initial concept of having actors copy the movements of the video and find their own emotionality through this process. I noted the simplicity of the set; rather than adhering to the Our Town convention of having no set at all and showing the audience the grey bricks of the theater’s back wall, scenic designer Garett E. Wilson provided us with his own brick wall slightly forward, perhaps to highlight the constructed nature of the set.

In the third act, however, all bets were off; the video was gone, actors playing dead characters assumed modern garb, and, in a stunning transformation, the black brick wall turned around to become part of an intricate realistic set, complete with real walls, furniture, and freshly cooked bacon and eggs, whose smell wafted through the theater. Assistant Set Designer Mackenzie Whiting ’16 noted that “The most difficult part was dressing the kitchen and figuring out what belongs where, in a way that felt lived in and also appropriate for the period.” In the scene Whiting is referring to, the dead Emily Webb (Lucy Consagra ’18) revisits her previous life to find it full of a beauty she had never seen before, forcing and reinforcing the show’s famous central question: “Does anyone ever realize life while they live it, every, every minute?” 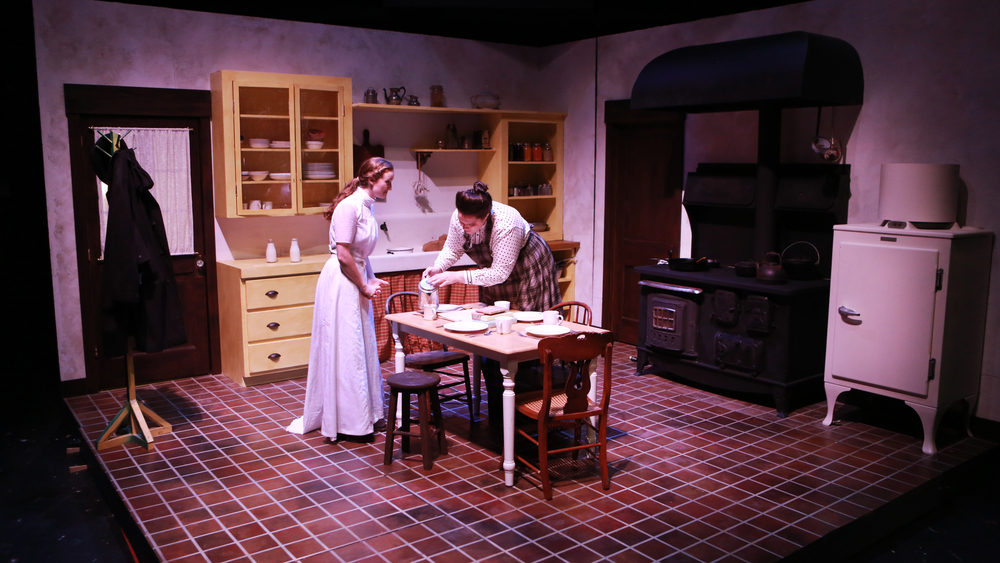 When we act, it is often a process of looking within ourselves to find aspects of the character we are trying to highlight. However, these actors were initially banned from doing so—the first step in their process was to look within the video, to find what another actor had previously imagined. “Once we were able to make the movements we memorized second nature,” says Dave Schechter ’18 (Constable Warren), “Our true selves started to shine through the characters we were portraying.”

Lucy Consagra ’18 (Emily Webb) described the experience as “Like [having] a buddy to go to rehearsal with every day to help me understand the character.” Erica Schnitzer ’18 (Mrs. Webb) concurred, saying she and the much older actress on screen “Were the same person, almost. I still of course brought my own personality to it, but the way I approached the role was different than the way I approached most other roles. I no longer see the line between young and old; it’s kind of one fluid person.” Tom Chandler ’16 (Stage Manager) spoke of a reconciliatory process between his acting style and the one on screen: “Spalding Gray was such a powerful force and he had a very specific edge to him, very conversational. I have a different kind of edge.” 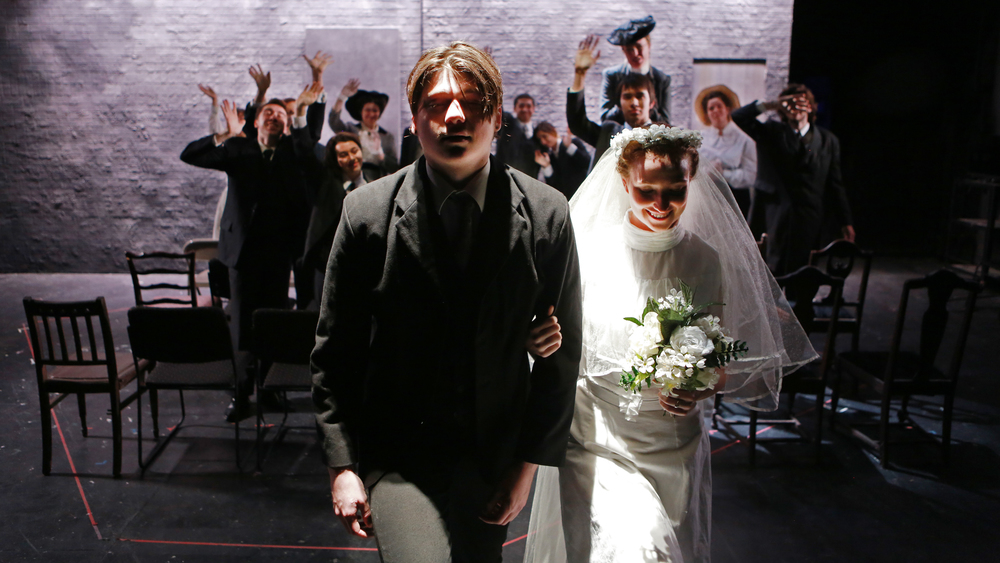 In speaking with the actors, it becomes clear that they are grappling with one of the central tenets of performance theory: the melding of actor, character, and how the audience perceives both on stage. Performance theorists have argued that we go to the theater both to see the character and to find the actor’s presence within that character. Soltanoff’s production has introduced an extra dimension, a second actor situated somewhere between the actors on stage and the characters of Wilder’s masterpiece.

Assistant Director and Video/Sound Designer Aaron Ardisson ’16 is absolutely right when he called for Skidmore Theater Department to continue pursuing this kind of experimental work: “For us as students, we have the opportunity to take risks. Phil provided the structure to take these risks with an unconventional production, and the experience will certainly influence how I approach theater in the future.” Joshua Wagner ’17 (Doctor Gibbs) adds, “being an actor in this show really opened my eyes to the significance of the piece.” Ethan Embry ’19 (Mr. Webb) sums it up: “I feel like I’ve been exposed to a new world of theater.” As a student, I am grateful to Soltanoff for his presence here, and feel fortunate that this Skidmore production has been, as Soltanoff describes it, “Folded into my history of building theater.”

Nick Graver is a Senior Dramatic Literature and Environmental Studies double major, and is a staff writer for the Living Newsletter.