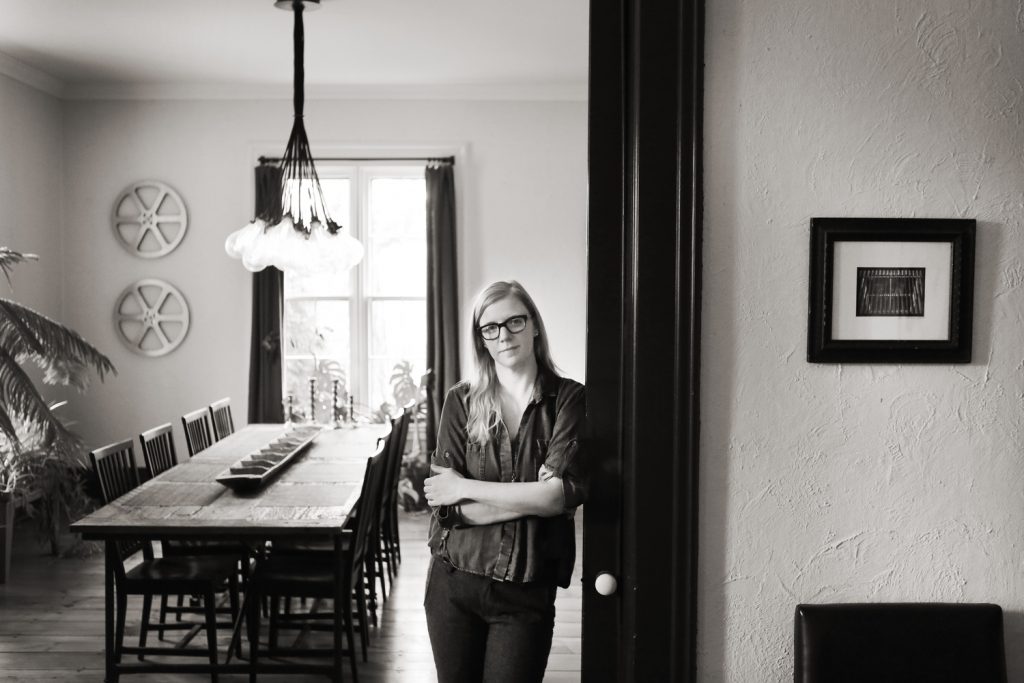 Kessler at her Saratoga home in 2016. Photo: Jared Klein

When Sue Kessler greets me, she’s lighting a fire in her home’s traditional wood-burning fireplace. The house is impeccably decorated, with a sense of polished, rustic charm. Kessler’s great-grandmother’s pottery adorns the bookshelf in the living room, while her daughter’s wooden toys are tucked into the corners. After five minutes of chatting over cups of tea, it is clear why Kessler has developed a cult following at Skidmore. She is dressed in a Led Zeppelin t-shirt and mukluk slippers. Kessler seems like she could be a current Skidmore student herself. Part of this comes from her youthful professionalism, which makes her incredibly relatable and easy to talk to. The other part comes from the fact that Kessler was a Skidmore student herself, once upon a time—she graduated in 1999.

Since then, Kessler, along with fellow Skidmore alum Noel Joseph Allain ’98, founded The Bushwick Starr, an OBIE award-winning independent theater in Brooklyn for which she currently serves as Executive Director. Now, Kessler and her husband, Skidmore Theater Technical Director and design professor Jared Klein, have returned to Saratoga, where they live with their four-year-old daughter Willa. While Kessler is maintaining her career as Executive Director of The Bushwick Starr, she is also developing the Theater Management program at Skidmore. We sat on pillows on her rug and talked about her path from student to educator, and her ongoing transition from the Brooklyn art scene to Saratoga’s pastoral setting.

Born and raised in Cleveland, Ohio by two artist parents (her father is a conductor with various orchestras and choral ensembles in Cleveland; her mother is a college English professor at a visual arts conservatory), Kessler’s interest in avant-garde theater began before birth. Says Kessler, “I grew up with liberal, hippie, boundary-pushing parents. The high school I went to was also very progressive… I was lucky enough to be exposed to outsider art from a very early age, and it has been surrounding me my whole life.”

Kessler describes her undergraduate experience at Skidmore as a series of “happy accidents.” She was a self-proclaimed “Renaissance Woman” in high school, and juggled a series of different interests including photography, music, and theater (all of which she still pursues). At Skidmore, Kessler continued to study photography as a studio art major. The theater department noticed her talent and asked her to work as the department photographer for the semester. Kessler remarks fondly on the relatable roller coaster ride that was her first year at college, “I did what I always do, which is put myself out there in a lot of different areas. I joined a bunch of clubs, took a bunch of classes. I was basically getting my footing but really enjoying it, and the freedom that Skidmore offers students to do that is amazing. But I knew all along that I wanted to be a studio art major. And then began this parallel interest in theater.” 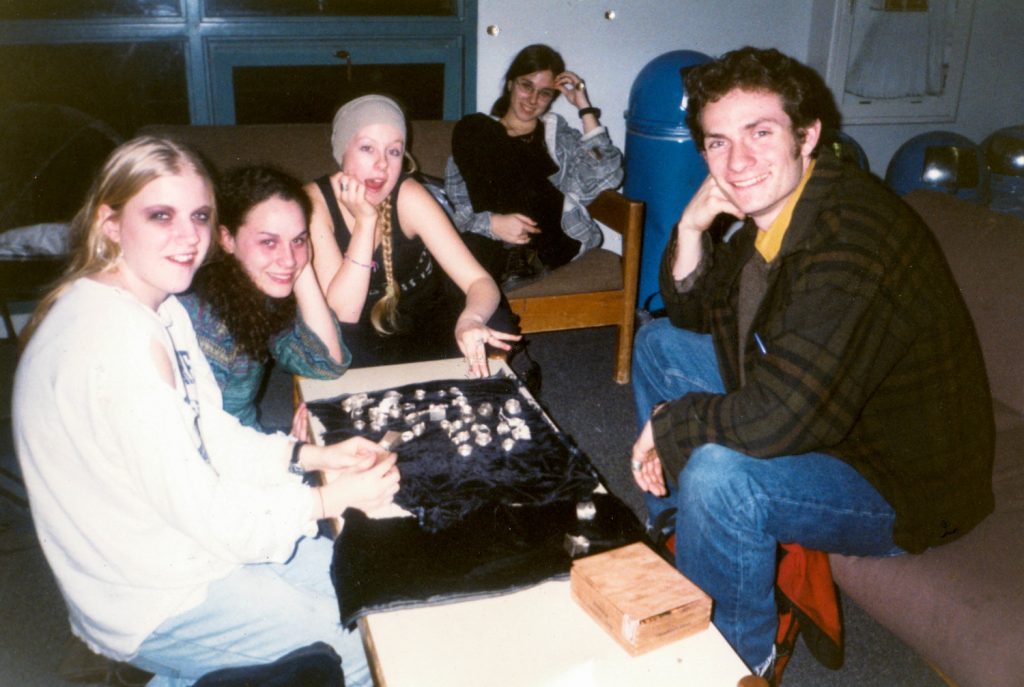 While photographing a Phil Soltanoff-directed production of Sophie Treadwell’s Machinal, Kessler met a “gaggle of Skidmore theater kids” who had similar interests in experimental theater. Soon, Kessler and her crew (which would ultimately form into the experimental theater company Fovea Floods) began making theater both at Skidmore and in downtown Saratoga at Caffé Lena. It was a formative period. Says Kessler, “Getting the word out, marketing, grant writing – all these little things we started to learn in those early days, and that gave us a huge leg up when we began to actually work in the real world.”

Thus, at Saratoga’s historic Caffé Lena, Fovea Floods was born. The group called their performances “sensory bombardment” theater, or “high octane, high value, blink-and-you’ll-miss-something theater.” In addition to acting, Kessler felt drawn to offering management and administrative support. She says, “It was clear that it was something that I found very rewarding and was naturally good at.” However, it is in Kessler’s nature to wear multiple hats, and she also worked as the group’s Music Director.

The group stayed in Saratoga for almost a year after Kessler’s graduation, during which time she and fellow Fovea Floods founding member Josh Chambers ‘98 composed music for Skidmore productions of Vinegar Tom (1999) and Book of Tink (1999). The latter, written by award-winning playwright Erik Ehn, was commissioned by The Skidmore Theater, and had its world premiere on the JKB Mainstage. (Click the play button below to hear Kessler singing in an early demo of the song “Panmade,” one of over twenty original songs written for the show by Josh Chambers and arranged by Sue Kessler)

In 2000, Fovea Floods migrated en masse to Brooklyn. Space was hard to find, so the group found an affordable Bushwick loft to rent. Kessler describes early 2000’s Bushwick as “gritty and desolate.” The drama didn’t leave the stage, either — in true artistic fashion, Kessler labels the company’s behind-the-scenes drama as “Brooklyn Melrose Place.” “Naturally, we were all dating each other,” says Kessler.

Kessler is a pioneer, and thrives off of the regenerative nature of the artistic process. She says, “I’ve always been one of those people who doesn’t care what the neighborhood is, I just want a lot of space. I thought it was really exciting! Very few artists had discovered Bushwick yet.” The group continued to develop shows in Brooklyn (beginning with a Kessler-directed production of Genet’s The Maids) and then produced them in downtown Manhattan. The company also returned to Saratoga at points. Kessler was living and working in the loft, which was slowly being converted into a theatrical space. Says Kessler, “We built risers and a technical booth in my house. And we painted all the walls and windows black. It was no turning back from there – once you put black paint on your windows, you’ve sealed the deal—poof! It’s a theater!” 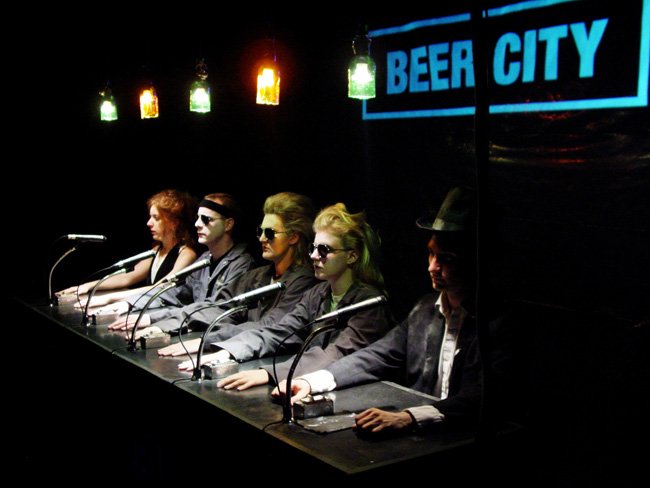 Eventually, most of the members of Fovea Floods went to grad school, and the group slowly disbanded. Kessler stayed in Bushwick and acted as a seminal figure in the growing Brooklyn arts scene. After a few years of renting out the loft space, Kessler and her artistic partner, Noel Allain, decided to go back to their roots and turn the loft into an actual company. She says, “it was almost immediate from there, all of the sudden we saw the light. We decided we were going to curate a season, were going to get artists and get funding to sustain the venue. All of the sudden people wanted to work with us. Artists want to work with people who have a mission, people who are inspired.”

By 2008, The Bushwick Starr had been fully born. Kessler attributes Jared with thinking of the name. She says, “Our theater’s aesthetic is based on grandiose old performance halls and opera houses, but that are kind of crumbling down. It’s not fancy, though the name is an homage to a more fantastical and romantic time of the theater. But including Bushwick in the name was important.”

Kessler is very humble about the theater’s success. In 2012, The Bushwick Starr won an OBIE Award for Outstanding Work, and the theater had an extensive profile in the New York Times last fall. For all the excitement in Brooklyn, though, fate once again drew Kessler back to Saratoga. After longtime Technical Director Dave Yergen’s passing, Klein was offered the position of Technical Director for the Theater Department. Kessler admits that it wasn’t the right timing. Things were moving full speed ahead at the Starr, and the two had their daughter, Willa, in 2011. However, the family couldn’t ignore the amazing opportunity for Klein, and the advantages that would come with raising their daughter in a more rural setting. 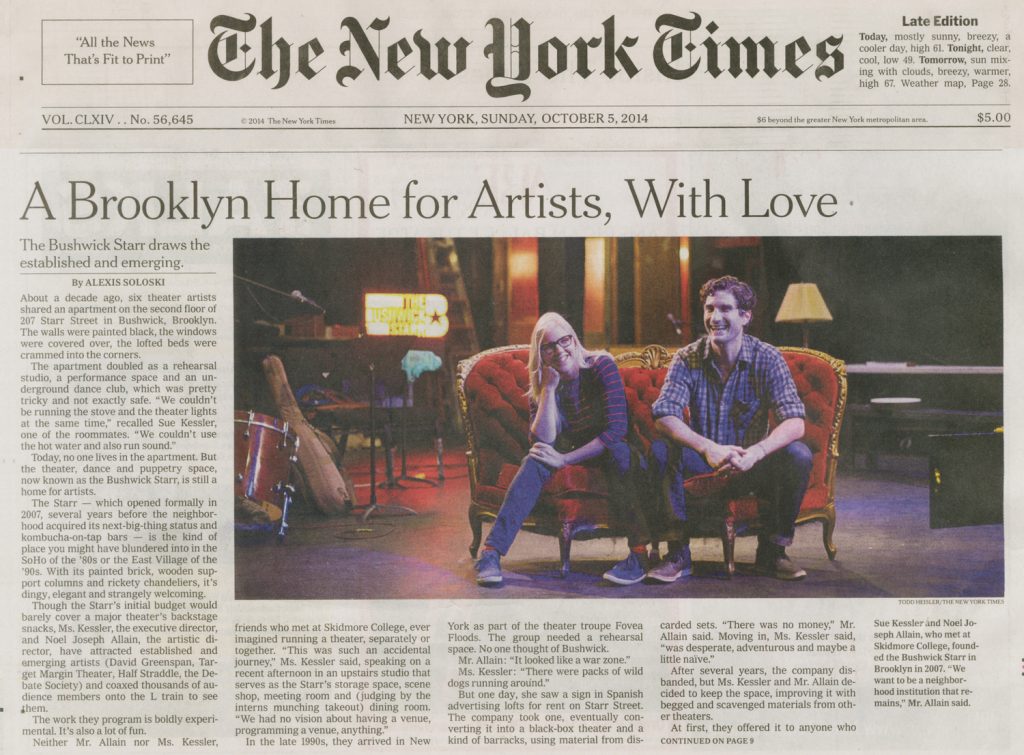 Within two weeks of moving to Saratoga, Theater Department Chair Lary Opitz asked Kessler if she was interested in collaborating with the department to expand the Theater Management program. Kessler, an innate self-starter, loves that the program is so student-driven. She says, “it’s very important to me to have students get excited and ignited by their own ideas.”

Before our two-hour long fireside conversation ended (Kessler had to go pick Willa up at school) I asked her what piece of advice she would give to students. Her response: “Really ask yourself, challenge yourself rather, to make something happen for yourself. To be a self-advocate, to be incredibly tenacious, and to make it happen on your own…Make something for yourself with your own resources, because it will only make you a stronger artist.” Kessler’s can-do attitude and motivational energy are the driving force behind both her success with The Bushwick Starr and her work at Skidmore. Whatever comes next, whether it be a “happy accident” or not, the charm and talent that Kessler infuses into her work will ensure that it is a hit.

Zoe Dartley is a senior English major with a minor in Government. She has recently contributed to Saratoga Living and the Skidmore News. Zoe is a staff writer for the Living Newsletter.