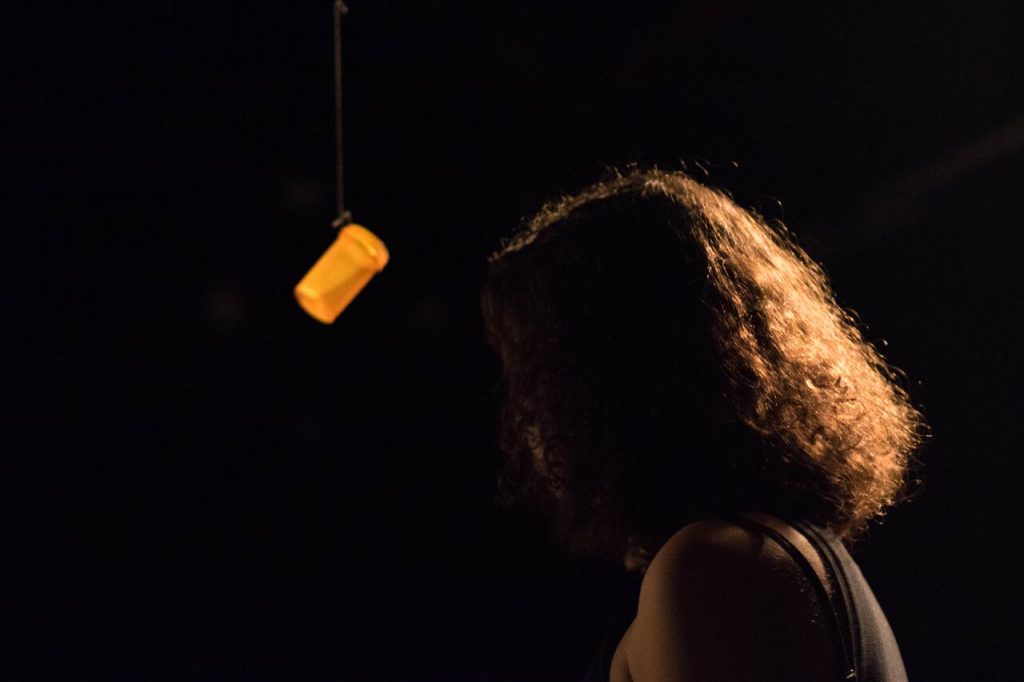 The Interconnectedness of Suffering

Sarah Kane ended her life in a hospital bathroom, hanging herself by her shoelaces. It was 1999: she was staying in the London King’s College Hospital after having attempted suicide only three days earlier. The hospital staff had been told to “constantly observe” Kane because of her unstable mental status, but they let her go unwatched long enough to lock herself in a bathroom stall.[1] Kane’s death looms over 4.48 Psychosis, her last play. It’s impossible to ignore the real-life context which frames Psychosis as a narrative: a play about suicide written by a woman who did not want to live anymore. Critics were notoriously wary of the play’s content; in his review for The Guardian, Michael Billington asked, “How do you judge a 75-minute suicide note?”[2] There’s a concern among likeminded critics that performing Psychosis is comparable to endorsing suicide. Rachel Karp ’18, director of the inventive and gripping Skidmore production, does not share this limited viewpoint.

Karp’s production, rather, draws out the expansive possibilities within Kane’s text. The script reads like poetry, without characters, stage directions, or scenes—the markers we usually expect from a play. Karp uncovers relationships and storylines underneath Kane’s abstract words and creates a performance that is much more than a suicide note, revealing that 4.48 Psychosis is a work of art about the fluidity of human emotion—our capacity to experience a spectrum of feelings simultaneously, and to feel each individual emotion strongly. 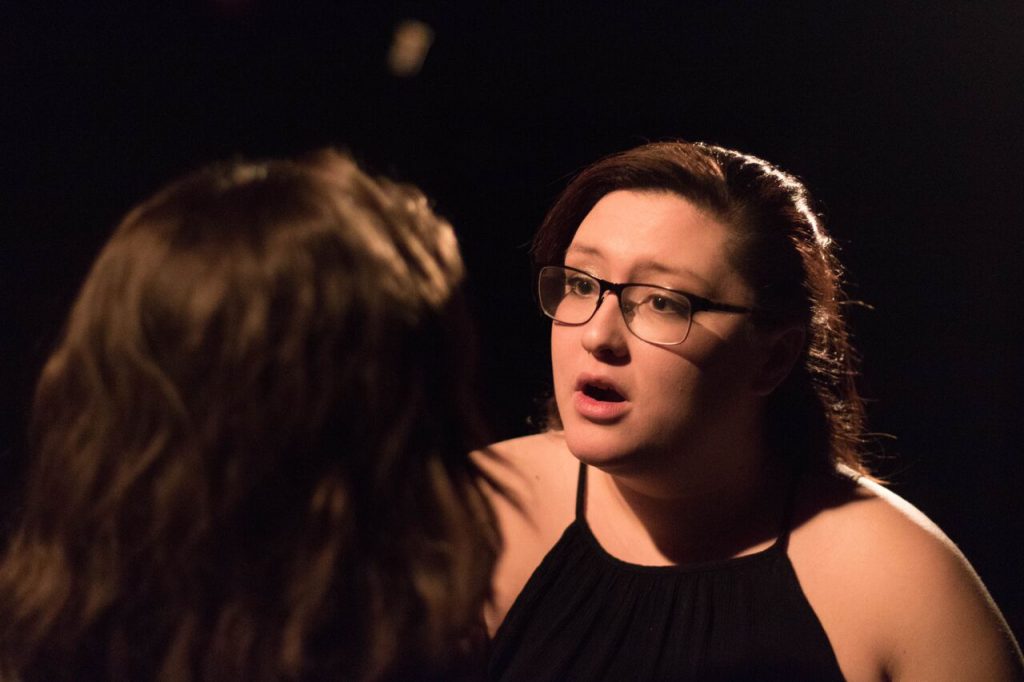 Even when the characters of Psychosis are depressed, anxious, and self-loathing, they experience love. This love can be painful as well as pleasurable, but, no matter what, it is always present and integral to the story being told. The play begins and a woman (Zoe Lesser ’19) wanders, slow and inquisitive, almost as though in memory, observing seven other actors participating in independent activities. Soon after, this woman declares her intention to hang herself “to the sound of [her] lover’s breathing,” as she kneels beside the sleeping body of her apparent partner (Taylor Goodwin ’20). The woman’s subsequent suicide, following this declaration, becomes the central event which incites suffering, rage, melancholy within the other characters. The relationship between Goodwin and Lesser is one point to which the narrative keeps returning. Goodwin’s reaction to his partner’s death is disturbingly authentic: in one memorable sequence, he speaks to the audience with Amina Theis ’17, and, recounting memories, their nostalgias transform into furies. As they yell repeated expletives together, the passion seems to be directed at the woman who, in ending her life, left them both painfully frozen, almost half-alive.

The other characters experience a multitude of reactions in response to the opening suicide. Maggie Bernstein ’20 grieves in counseling, ruminating over the unsettling knowledge that no matter how much time passes, her friend will remain dead, and the knowledge of that death will continue to hurt. We return to the counseling setting throughout the performance, as different characters share private moments with an unsympathetic and unsubtle counselor, played with a darkly funny touch by Lindsay Nuckel ’17. Nuckel’s obtuse counselor forces us to further relate to the patients she fails to help. Kara Powell ’18 grows increasingly exasperated with her counselor’s insensitivity regarding her self-harm, and we find ourselves irritated and alienated right along side her. 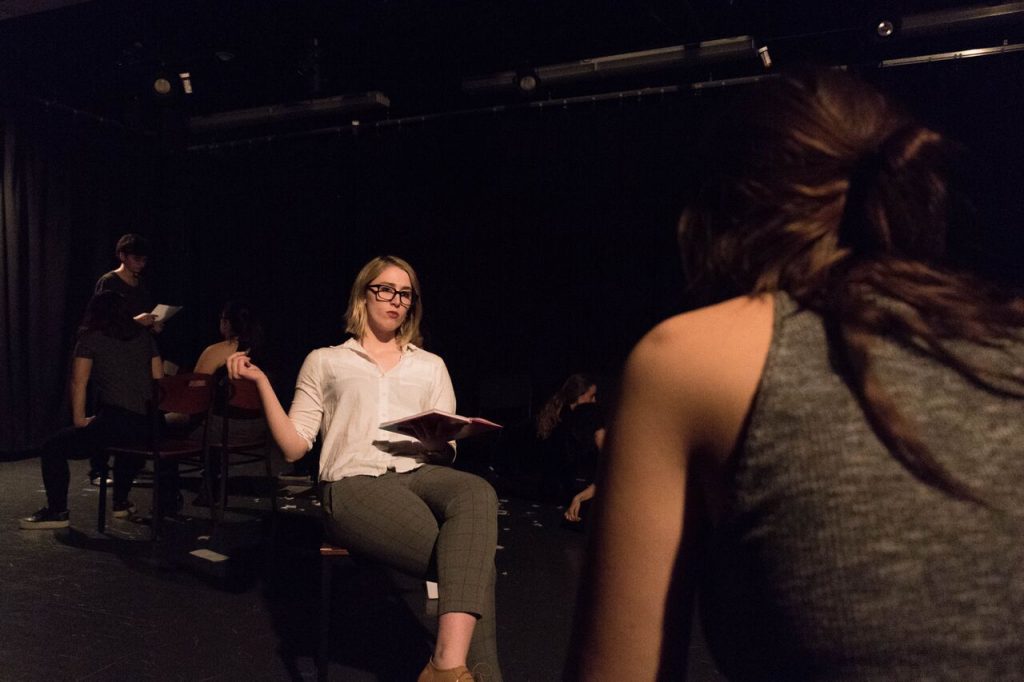 Perhaps above all else, the production engenders empathy. In the ending scene, the majority of the cast physicalizes their individual miseries, each person enacting a rapid movement sequence which evokes, to varying degrees of explicitness, a mood of self-harm and self-hate. As the chorus of seven builds to a frenzied climax, Lesser reappears, once again an outside observer. Abruptly, she turns on the houselights and pushes back each of the four curtains which frame the stage, erasing any divide between actor and spectator. As the actors continue to perform their physical rituals, this time in bright, clear light, we lose the ability to distance ourselves from the pain the characters feel. Pain might manifest itself in radically varied ways, but this production of 4.48 Psychosis requires us to see ourselves—our own anxieties, lusts, vexes—in its characters. We’re left considering the universality of loneliness, and, more importantly, contemplating ways in which we can try to abate this ubiquitous suffering. Karp, lighting designer Lea Tanenbaum ’19, and the formidable ensemble of eight actors ingeniously and arrestingly reveal that Kane’s play is not a theatrical suicide note, but instead a call for better listening—or, even more so, for better connection.