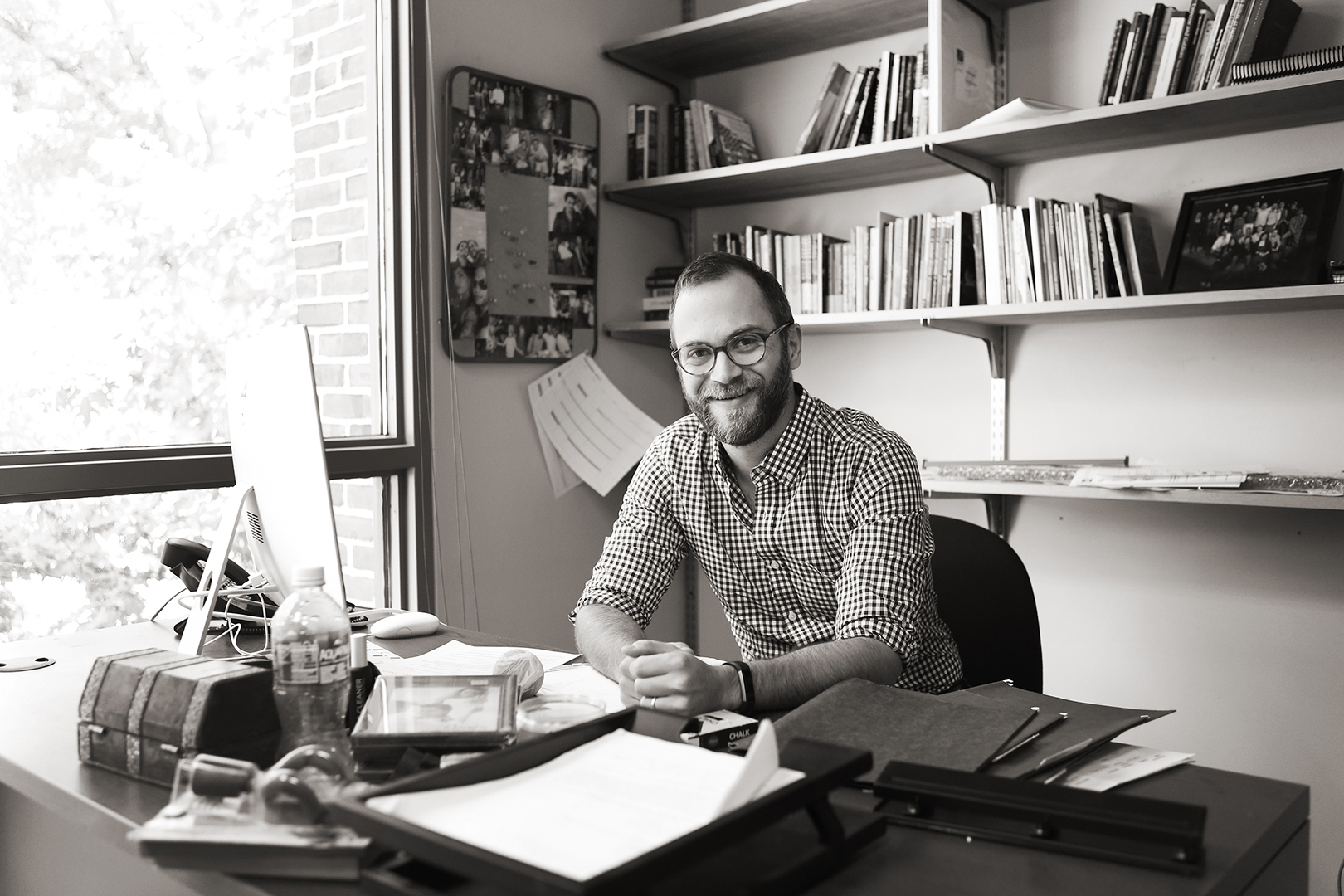 “I like to add those tiny moments of magic. Those things that make it three inches to the left of reality.”

I walk into John Michael DiResta’s brand new office. It’s bare, but filled with plays, small tokens of productions past, and the overwhelming sense that the gears of his mind are whirling with shows that have yet to see the stage. I sit in an avant-garde orange chair and begin to ask him about how he began directing, how he wound up at Skidmore, and what makes John Michael, John Michael.

DiResta grew up in the small town of Lawrence, Massachusetts and his family still lives in Salisbury, the last town on the coast before New Hampshire. When I asked about his home town, he remarked, “It is the birthplace of industrialization and it is absolutely beautiful from Memorial Day to Labor Day and terrible otherwise.” For a guy born and raised on the North Shore of Massachusetts, however, John Michael has seen plenty of city. After completing his undergrad at Columbia University in NYC with a major in English and a minor in American Studies, he went on to attend graduate school at Northwestern University where he received his MFA in Theater Directing.

After only taking a couple of playwriting classes and one acting class during his undergrad career, DiResta admits that the first “real” theater class he ever took was in September of 2010, during his first month of grad school. The class was Anna Shapiro’s Advanced Directing class, which DiResta could only describe as a sort of “trial by fire.” His undergraduate work was largely based in arts education. His senior year of undergrad, he worked for a not-for-profit called MCC Theater as the arts education intern.  DiResta added, “I was interested in education and thought I might want to become a high school English teacher, but I loved going to the theater so I started working for this off-Broadway theater company, so that I could get free tickets.” During his time there he worked for their education department doing in-school residencies and working with their youth company, which was an after school program for NYC teenagers.

As if that doesn’t keep a senior in college busy enough, DiResta also spent much of his time volunteering for an HIV testing site at Columbia and was incredibly active in HIV advocacy. When he completed his undergraduate degree he was offered the job of director of the testing site, and he happily accepted, with a start date set for a year later. During that year, however, DiResta was hired as the Associate Education Director at the Theater Development Fund, the non-profit that runs the TKTS booth.

All of a sudden, DiResta found himself working full time in arts education in the heart of New York City. He wound up turning down the offer at the testing site, two roads diverged, and despite his deep passion for both fields, instead of going into HIV advocacy he became a professional theater artist. He spent two years doing in-school residencies at TDF, and writing and workshopping plays. After that, he got a job at MCC as their Education Director. DiResta confesses, “At 25 I was running a not-for-profit education department with a gigantic budget all by myself, which was really intimidating. We did full productions of plays written by members of the youth company. So I was producing those plays and hiring professional theater directors. Really amazing directors. We hired Maria Goyanes, and Jackson Gay, and these really extraordinary people to direct these plays. I had always been interested in directing and I had directed a lot of workshops of my friends’ plays, but I had never done a full production. And so in my second year at MCC, I hired myself to direct a play.”

After directing his own production, DiResta fell madly in love with directing, and two years later he applied to graduate school. When I asked him why he decided to go to grad school, he replied, “I wanted to get trained. I hadn’t studied theater at all in my life. Everything I knew I had learned from going to the theater and through reading books, so I wanted to get trained. And I was 28 years old when I was applying and in my mind I was starting an application process that was going to take many years. I applied to 7 schools and much to my surprise I was accepted and went to Northwestern.” He graduated from Northwestern in 2013 and has worked as an adjunct professor and freelance theater director ever since.

DiResta has taught theater history, acting, and directing. He has taught at New York City Dramatic Academy and the Drama League. When asked about his feelings on teaching, he said, “I was teaching a lot. I love teaching. I often like teaching more than I like directing. They’re very similar things. You are creating a culture in a room and then executing objectives.”

A fan of magical realism, DiResta admits that his favorite plays are those that are just “three inches to the left of reality.” His favorite productions he’s directed include The Glass Menagerie by Tennessee Williams at Hal & Martha Wallis Theatre in 2012; The Drunken City by Adam Bock, which was performed at Steppenwolf in 2013; and a play called Favorites that was written for him to direct by his close personal friend, Charlotte Miller. Favorites premiered at Rising Phoenix Rep for one night only in 2012. John Michael DiResta said his least favorite productions remain the ones he does for money; “I find that the higher the paycheck for a freelance directing gig, the more likely it is that I will be unhappy when I’m doing it. I hope that eventually I hit a point in my life where that’s not true, but it’s where I am in my life right now.” 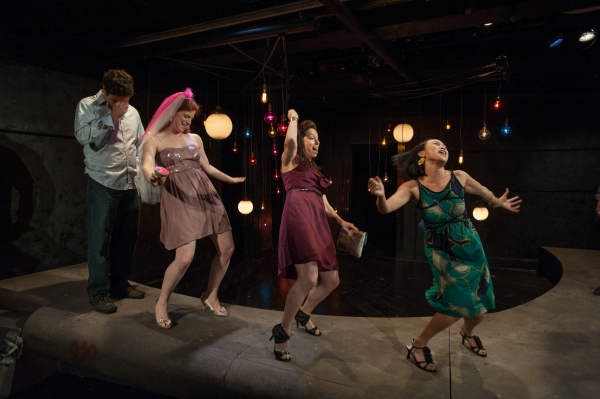 A shot from DiResta’s production of The Drunken City at Steppenwolf in 2013. Photo: http://www.jmdiresta.com/drunken-city

Despite his distaste for the productions he’s done for money, the contacts he’s made in New York throughout his career make him deeply connected to the industry. Skidmore Theater Department is lucky to have DiResta because he remains incredibly involved in the New York theater scene. “I’m looking to be exacting in those connections,” he says, “making sure that people meet the right people. One of the things I’m really hoping to bring [to Skidmore] is a direct channel towards [the professional world].” Even while working at Skidmore, DiResta is doing a show this coming October at the Laguardia Performing Arts Center in Queens and is workshopping a number of plays. While he is clear that being Skidmore’s newest Artist-in-Residence is his priority, it is undeniable that DiResta remains connected to, and looks forward to sharing with his students, the life he’s made for himself in the city.

Before leaving his office, I asked him about his passion project; what would he direct if he could do anything at all? To which he said, “Romeo and Juliet I actually don’t have a concept for, [but] I’m dying to direct it. I think it’s breathless and I think it’s contemporary and I think it’s very deeply related to Death Cab for Cutie. Though I haven’t figured it out yet, I know it’s in there.” I began to pack up as he said, “But I will take all of that back now and say my number one passion project that I want to do more than anything else in the entire world is Stephen Sondheim’s Assassins. I want to direct Assassins so badly. Yeah. I love that play.”

I quickly jotted down his changed opinion. I began to leave his office once more before he stopped me for a final time. “Tell people to come hang out with me,” he said, enthusiastic to get to know all of his new students. I stood in his doorframe now looking differently at the office I had entered just moments ago, nodded my head and assured him whole-heartedly that I would pass the message along.