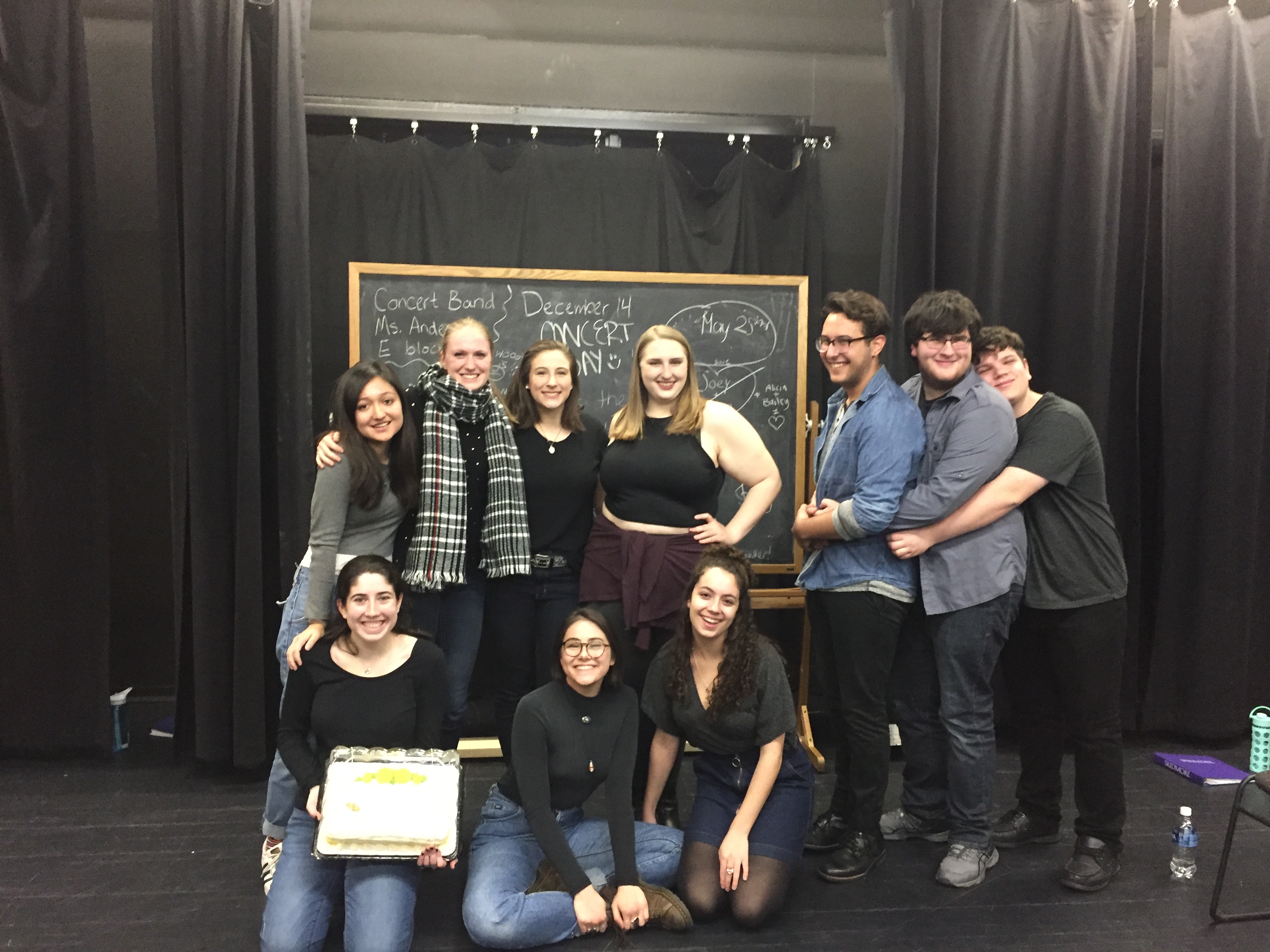 The cast and creative team of “Unison”

While musicals are a rare sight in the Skidmore Theater Department, there is always a space for relatable plays and experimental creative endeavors. Unison, our sole Playwright’s Lab of the semester, is a musical written by Adina Kruskal ’18 and directed by Mira Klein ’18. It portrays a microcosm of senior year of high school, through the lens of a group of band kids. Particularly by the second reading, roughly a month and a half after the first, the audience laughs uproariously at nearly every joke. For an audience comprised primarily of college students no more than four years away from the stress the characters onstage are experiencing, the material is highly relatable. The jokes about specific high school band experiences landed best. Enraged, one character interjects, “For the love of Brahms!” to cackles of glee from the viewers. Another’s verse in a song about the band’s collective exasperation and senioritis consists solely of the phrase, “this reed sucks,” repeated over and over again, to the amusement of woodwind players throughout the studio.

The comedy would not be half as effective without such a strong ensemble. Each character or duo is reserved an expository song in Act One, showing where they fit into the environment Unison has built. It includes the disappointing younger sibling, the bros, the friends unsure of their relationship after graduation, the person working hard and incredibly stressed about college versus the person to whom everything comes easily, and the ones who feel they don’t quite fit in anywhere. The cast clearly became deeply involved in the production, and their enthusiasm is visible in every scene. As Kruskal puts it complimentarily, “Our cast is a really stellar group of actors. They bring out the subtext that I was aiming for when I wrote, and even helped me discover new levels to the characters that I didn’t realize.” The actors’ enthusiasm and commitment to their roles certainly shows in performance. Joe Newman-Getzler ’21, who played the outcast, Ned, says of his experience, “I’ve never connected to a character quite like I connected to Ned – someone with a real desire to connect to people but still learning what tools he needs to do so. Seeing Adina’s vision come to life has been a joy, and I couldn’t think of a better cast and director to pull it off. I hope to see Ned again in the future, and for now, I’m pleased to call this my first acting experience at Skidmore.”

One of the potential challenges of the Playwright’s Lab is the way in which the play is broken into two separate showings, with limited rehearsal time. For Klein, “That was simultaneously the most challenging and the most wonderful part of working on Unison. Even though I was determined to get away with as much staging as I possibly could, the fact that this was a reading was a reminder that theater is ultimately about understanding the material and the characters.” There certainly was a great deal of onstage movement and staging for a reading, especially in Act Two; the entire team’s increased comfort and understanding of the text was very visible. On further developments, Kruskal expresses hope for a continuation of the obviously rewarding process: “It’s also just really exciting to be working on something completely new, and watching it grow. Everyone on this process has helped Unison to grow. There’s still lots more room for growth and revisions, and I plan on continuing to develop this piece after I graduate.”

The structure of the Playwright’s Lab is an excellent way for the audience to get a glimpse of that eternal mystery, the creative process, and watching the development of Unison has truly captured that. As Klein put it, both the audience and cast and crew were able to “live with theater” as the piece grew and evolved.

Em Miller is a Sophomore and current staff writer for STLN