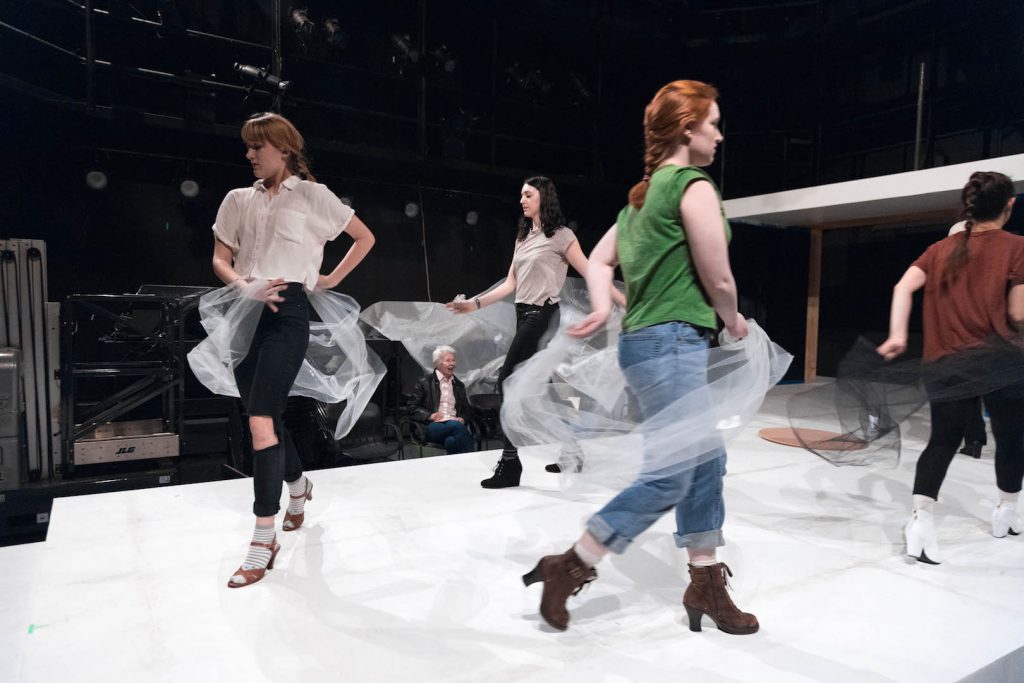 The majority of the cast has been sent into the theater lobby to practice their runway walks for the high-stakes fashion shows that span across decades and realities, leaving only Jess (Bianca Thompson ‘19) and Victor (Caoilin O’Connor ‘20) alone on a perfectly white stage.

Director Rachel Karp ’18, a large, red ball in hand, steps up and explains the exercise: O’Connor, in character as narcissistic fashion designer Victor, is to run through a litany of insults while throwing the ball repeatedly at Thompson, who must take each cruel remark in stride and toss it back with an implicit challenge of “you can do better than that.” Both actors rise to the occasion, and the practice teeters between comedic and dark as the energy of their camaraderie balances the increasingly unpleasant comments about Jess’ (Thompson’s) weight. Eventually, Karp removes the ball, and instructs O’Connor to continue without her aid. He responds by swaggering about in front of Thompson, pretending to take drags from an unlit cigarette and nodding to imaginary cheers as he further lacerates his co-star: referring to her, among other things, as “Orson Welles in a tank-top.” 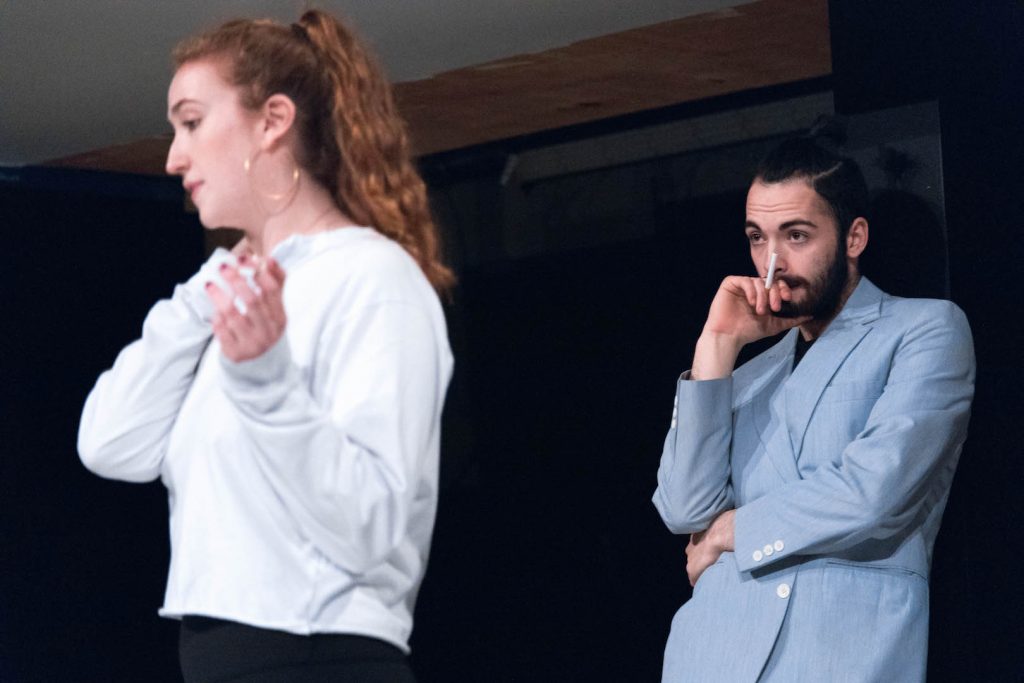 In spite of the cruelty of Victor’s statements in this scene, it does not take mental gymnastics to picture the engaged audience Karp describes. Sheila Callaghan, playwright of Everything You Touch, has created a rich, emotional landscape with a fluid dialogue between sharp wit and equally painful societal commentary—it is clear that the cast and crew have been giving their all to embody these extremes.

As Thompson states, “Callaghan ruthlessly tackles so many issues in our society that women inherently grow up dealing with, from struggles with body image to trauma and harassment. This story not only acknowledges large systemic problems with the way we treat women, but it also explores how our patriarchal, and often misogynistic, social narrative has shaped how we think about ourselves on an individual level.” 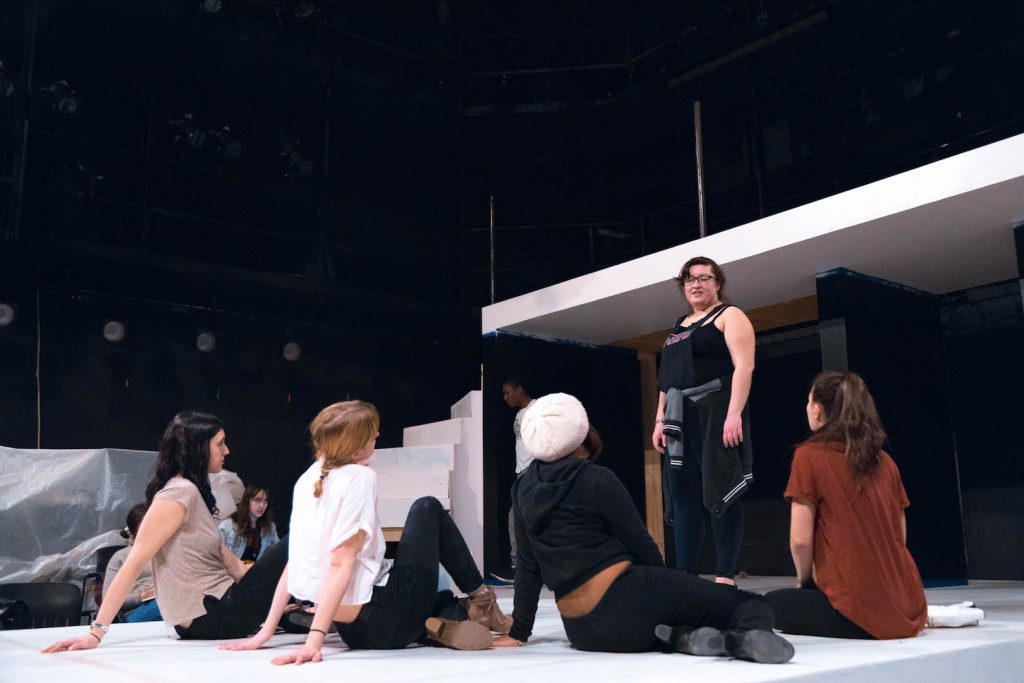 As the rehearsal continues, it becomes clear that the production’s close examination of misogyny and objectification extends beyond interpersonal interaction and vocalized inner monologues. Then the models return to the stage, but not as characters. In one scene, Olivia Bagg ’19 sits next to O’Connor and holds out an ashtray in silence, while backstage, Chloe Brush ‘18, Props Master, and several shop workers try on a bar sign that has been fitted with straps for Finley Martin ‘19 to wear in another scene.

The degree of collaboration between areas is evident—is this the domain of costumes? Props? Scenic? In any case, it is obvious that each production element has been considered in how it deals with the questions Callaghan poses about how bodies, particularly those of women, are viewed. 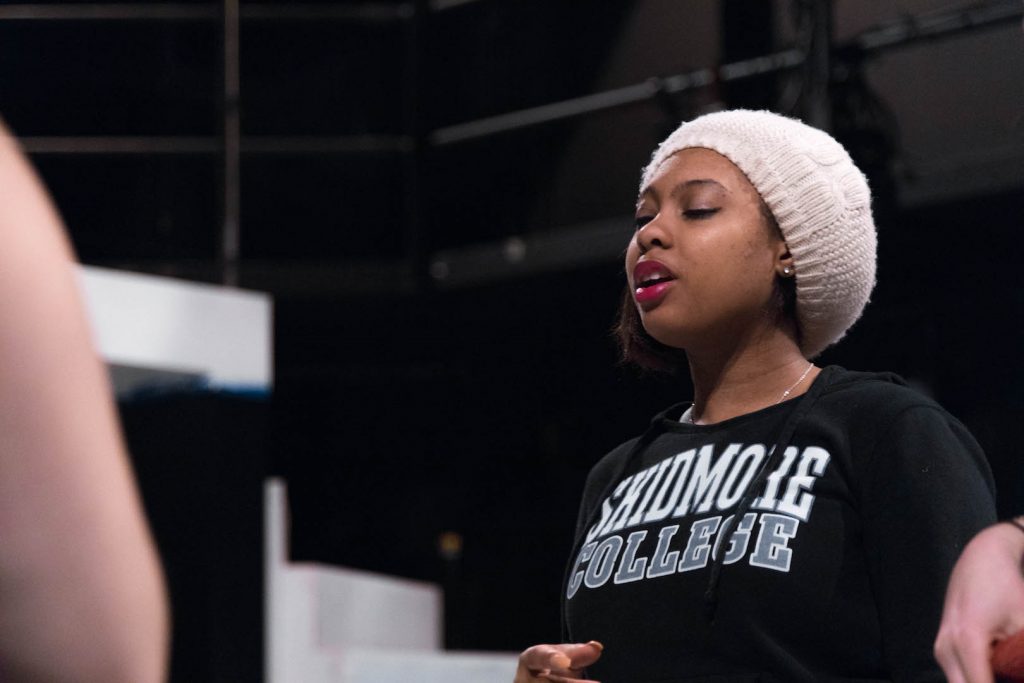 This extensive and rewarding collaboration likely stems from a unique fact about this show: it has an all-student design and production team. This may sound daunting in the context of a seminar production such as Everything You Touch, a full-length play in the Black Box, but it is not a new phenomenon at the JKB—and this group has stepped up to the challenge, happily.

Leah Mirani ‘18, Costume Designer, welcomes it, saying, “The process of working with an all-student production and design team has been fantastic! We’ve all been learning from each other, which has been a really special process that you can’t get in any other way. For a lot of us, we’ve worked together many times before this, in different positions than we are in now. It’s been very exciting to take on a leadership role for this show, and see others do the same. We’ve all grown as artists over the course of our Skidmore careers, and that’s really coming to fruition in this moment.” 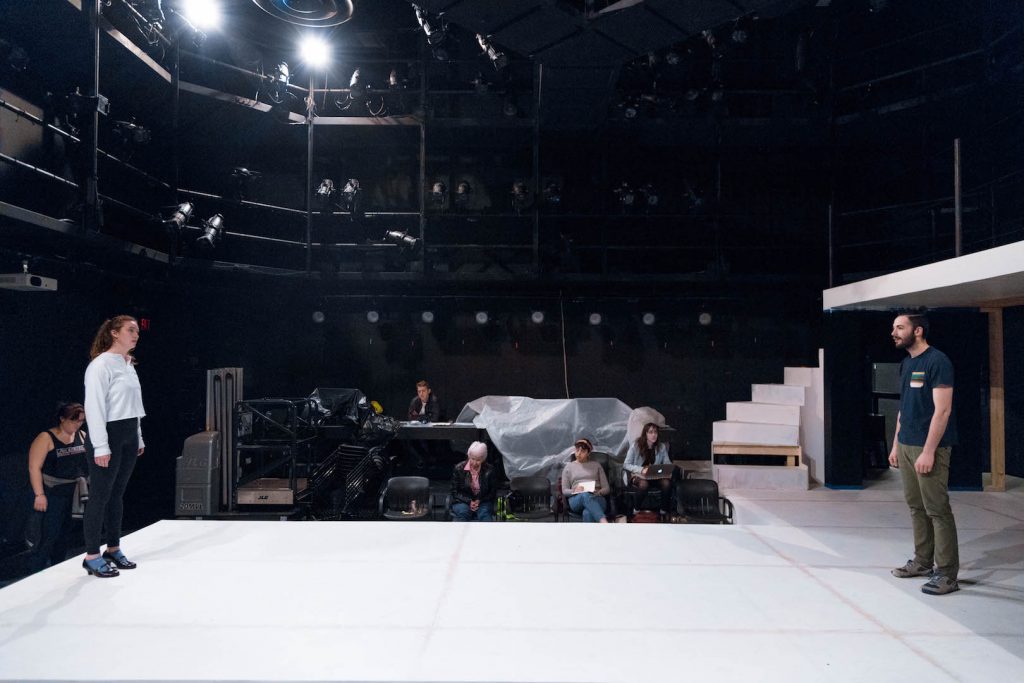 The degree of creative cooperation from this team of peers is apparent in the cohesive set, which is centered, and always has been, around a mock runway, painted flat white.  Scenic Designer, Sarah Markley ’19, intends to create a space which, in its apparent immaculacy, mirrors the obsession with perfection around which the play revolves. Omi Furst ‘18’s lighting design is in perfect dialogue with the stark environment, using both contrasting warm atmospheres, and breathtakingly minimalist views evocative of James Turrell. She and Max Helburn ‘18, Sound Designer, are also putting their joint efforts to bear on the ongoing problem of how to depict the regular transitions between time periods that the script calls for.

Despite the amount of effort, the joy that the cast and crew has in their work on this production is apparent and contagious. They have all evidently been drawn to the play for some personal reason, and perhaps Thompson gets at the reason for its influence in her discussion of its importance to her: “The power of Sheila Callaghan’s writing is that no matter who you are, I think you will find yourself somewhere in this play. Doing this piece in our majority-female theater department at Skidmore is a huge win for women. It is so refreshing to have a female-driven play written by a female playwright in our season.” In a culture that still silences women’s stories, a work that uplifts those voices in a funny, poignant, and captivating way will always be worth engaging. 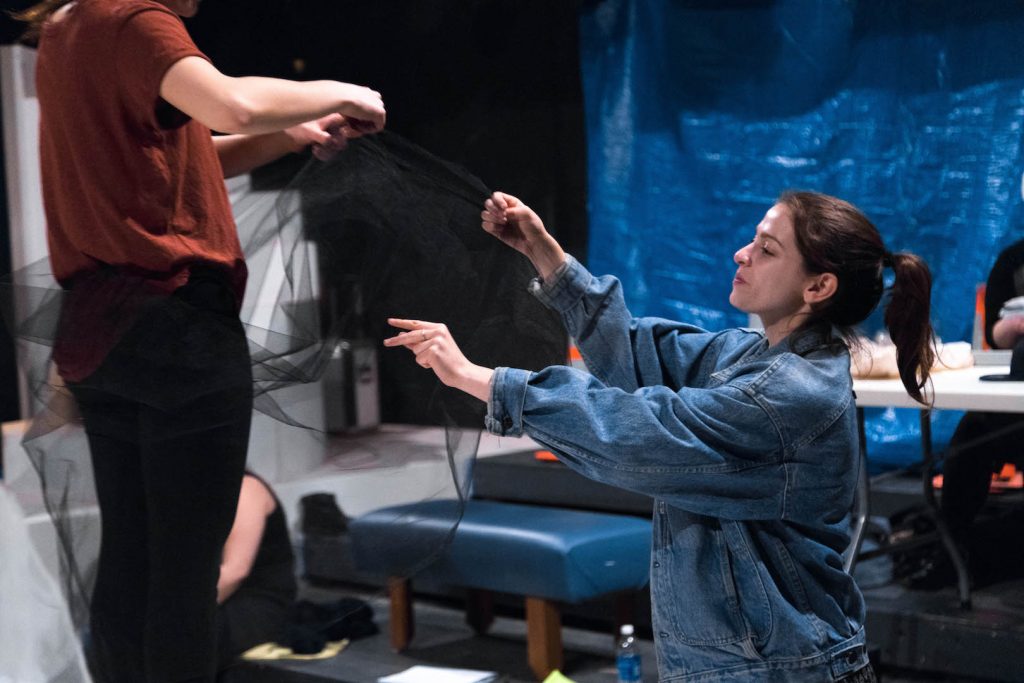 (It is worth emphasizing beforehand that this play deals with heavy topics such as suicide, body image, and parental abuse. Karp has pushed to make this production into a “brave space,” in which everyone involved “feels safe enough to be uncomfortable,” and part of this safety must include being upfront about what instances might call for bravery. Viewers are encouraged to keep this in mind and be prepared for the effects, good and bad, that are emotionally charged in this way.) 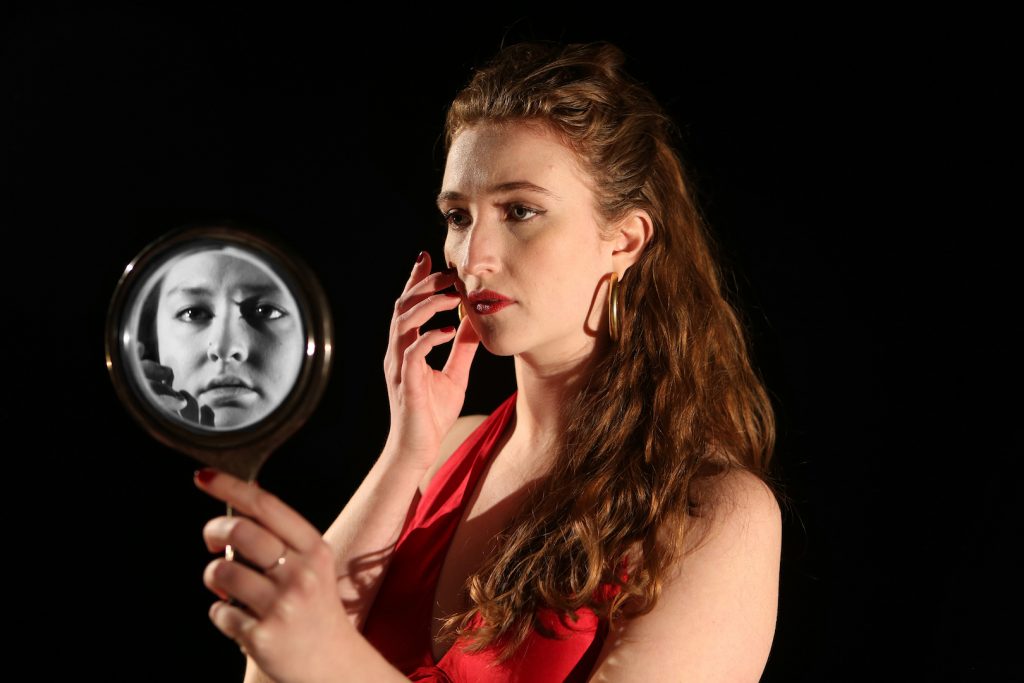 Em Miller is a sophomore and staff writer for The Living Newsletter.