By Kallan Dana and Philip Merrick

This summer, two JKB students received the SEE-Beyond Award, a $4,000 prize used to fund their summer experiences. Below are the accounts of our 2018 theater award winners: Jamin Garcia ’20 and Nina Slowinski ’19! 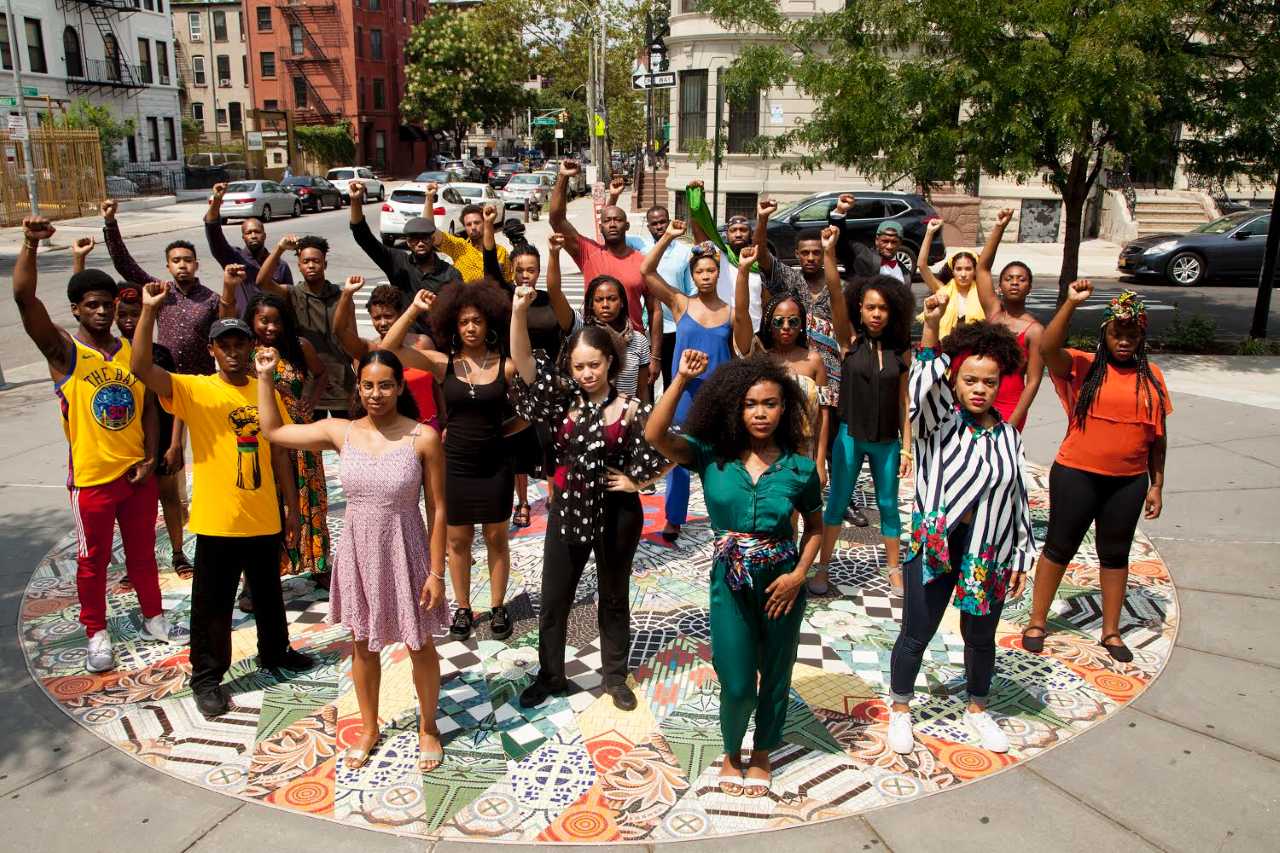 Jamin Garcia ’20 put her award towards her participation in the Summer Black Arts Theater Intensive, a five-week, multidisciplinary training program run through the Stella Adler Studio of Acting, in partnership with the Billie Holiday Theatre. Based in New York City, the new intensive (2018 was its inaugural year), seeks to explore black theater in the United States, and expand its students’ understanding of the aesthetic, social, and political qualities of the performance tradition. “Basically, its goal was to teach us everything,” Garcia laughed. “It was intended for students of the African diaspora, and they tried to teach us something other than what most institutions teach about what theater is,” she said.

Because the program was entirely new, their day-to-day schedule was often spontaneous and surprising. “Guest artists would come, or we would have a last minute music or dance class from different instructors,” she described, her eyes lighting up with joy. Even with such a shifting, original schedule, they still had core classes—Movement, Voice and Speech, and Scene Study. “We worked with some August Wilson and Suzan-Lori Parks plays, among others,” Garcia detailed. Her favorite scene to act in was from Pearl Cleage’s Blues for an Alabama Sky. “My character used to be a prostitute, and it was hard for me to put myself in those shoes,” she explained. Though she initially struggled with relating to a character whose background was so different from her own, she was grateful for the opportunity to play the part. “I was able to see the humanity in her more clearly,” she said.

Garcia was thrilled with the number of plays and playwrights she discovered for the first time this summer. “I wanted to build my knowledge about black theater and build certain skills that I had started to lose in not doing theater for a bit,” she said. Garcia had taken Black Theater with Eunice last fall, and from that point on, had been searching for a black theater program she could enroll in. “I realized how much I needed to go back to my roots in the theater world, because I knew nothing about it,” she said. The Stella Adler intensive was the first option she found, and while she was immediately compelled to apply, she admitted surprise at the scarcity of other theater training programs specifically created for and by black artists. “As a group, we had many discussions about how the program would sustain, because many of the black arts theaters that used to exist don’t really exist anymore,” she said.

For Garcia and her peers in the program, noticing this lack of visible representation inspired plans of action for the future. “Some of us spoke about starting our own theater company together,” she revealed. One day of the program, the renowned poet Sonia Sanchez took Garcia and the rest of the students to the New York Public Library’s famous Schomburg Center in Harlem. At the center, they learned about the American Negro Theatre (ANT), a legendary mid-twentieth century theater famous for launching the careers of Ruby Dee, Harry Belafonte, and more. “There’s a very small theater at the Schomburg,” Garcia described. “Some of us thought about trying to stage something down there and bring it back to life, because nobody stages anything there anymore,” she said, excitedly.

The body of students doing the program was in itself diverse and varied. “The age range was wild,” she commented. “The youngest person there was eighteen. The oldest was probably about fifty years. There were working actors there, graduate students, college students.” The students came from all over the place—while Garcia is from the Bronx, only a handful more of the thirty-two students in the intensive were from the city. The rest came from all over the country, and one international student traveled from Nigeria. By the end of the summer, these differences were only surface-level. “We all came in there broken, and we all came out of there transformed,” Garcia stated. “We just felt emotionally, mentally, spiritually, physically stronger.”

Moving forward, Garcia is excited to continue learning and creating. “I realized this summer that I need to read more,” she said. “We had a teacher tell us that all actors should be playwrights as well. I need to start writing.” Her entire perspective as an artist has been changed—it’s solidified her path and future plans. “It has inspired me to be an actor. Before I didn’t think of it as a career, but now I’m seriously considering it,” she said. Whatever future may be ahead, Garcia will always be grateful for her summer at Adler and the Billie Holiday theater. “It’s something that I’ll carry in my heart for the rest of my life,” she said, smiling. 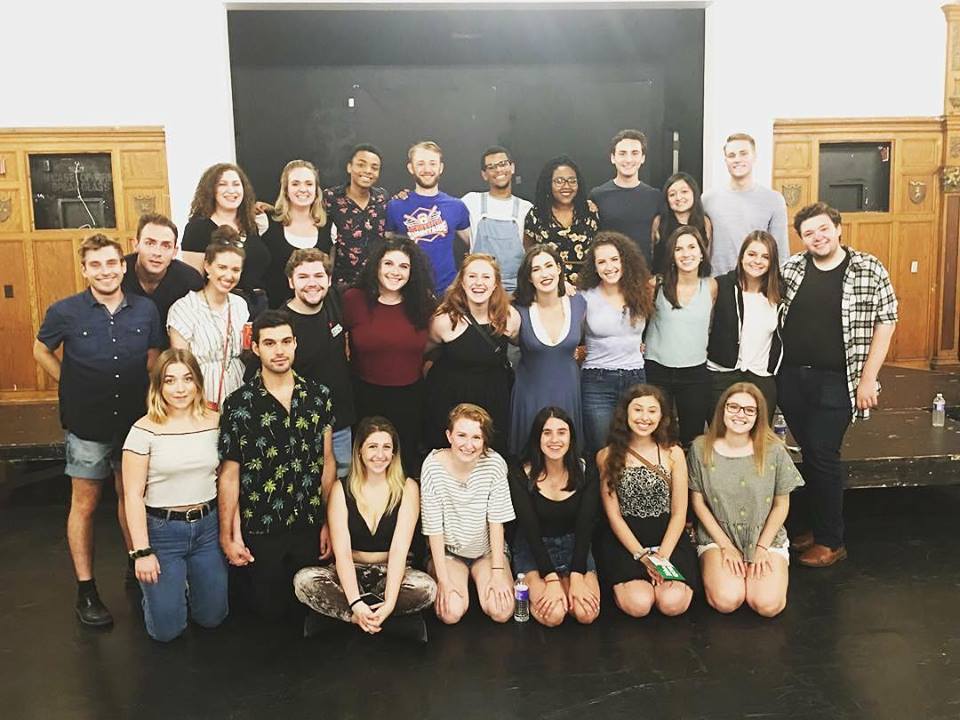 That’s just one of the things Nina Slowinski ’19 learned during her work with the Hangar Lab Company this summer. Their July production of Ajax was proof enough. “I’ll never forget when [Ajax] died,” she recalled. “He was greeted into the underworld by his ancestors in the most feminine way possible. He discarded all his masculinity.” This was apparently accompanied by lights, bubbles, and the Swedish pop hit. “Audiences laughed, but they didn’t know what to do. That was really cool.”

Slowinski assistant-directed this production and two others in her time with the Hangar Lab Company, which took place in and around Ithaca College and which was made possible by Slowinski’s SEE-Beyond Award. She also worked as the associate dramaturge in two productions and even made an acting cameo in Carol Churchill’s Far Away—all in five weeks. It was, to say the least, an intensive experience. “You’d rehearse for a week and you do tech for half a week and then you’d go up,” she said. “But I never felt like the process was compromised for the product.”

Slowinski chose to apply to the Hangar program in part because it had a directing track. “Directing programs are really hard to find in the summer,” she said. “This one had a specific track tailored for directors and assistant directing and getting to work on some of your own projects.”

But getting on-the-ground directing experience was not the only draw. Being able to work with older theater artists, including Drama League directors, actors chasing Equity points, and recent college grads, helped mollify pre-graduation dread. “I’m going to graduate next year, and seeing other people do that, and making waves with it,” she said, “and doing it in a way where it seems like there’s some sort of composure—it’s really calming.”

What Slowinski derived from all the hard work and exposure was an understanding of the director’s role as a storyteller. “It all goes back to that,” she mused. “Everything should go back to supporting what you’re trying to get across. Which sounds so simple, and it is, but it’s one of those things that’s so simple that it’s easily forgotten.”

Her other big takeaway? Make sure the stories you tell are important to you. “A lot of theater on Broadway or West End–commercial theater–can really forget a lot of what’s happening in the world and can become just for entertainment purposes. […] I think that’s why a lot of people can be really resistant towards theater,” she opined. “And that’s not to say that you can’t make an interesting Heathers or Mean Girls, but there has to be a point you’re driving it with, and it needs to be something that intrigues you.”

Slowinski would recommend the program to anyone who wants to work hard and meet smart people—“but definitely people who aren’t afraid of being exhausted at the end of the day.”

“I’m really grateful for the SEE-Beyond award and all it has allowed me to do,” said Slowinski.

The SEE-Beyond Award is awarded by the college to students from each academic department for the purpose of funding summer educational experiences beyond the campus. The $4,000 scholarship is typically awarded to two members of the Theater Department each year. More information about the SEE-Beyond Award can be found on the Skidmore College website.