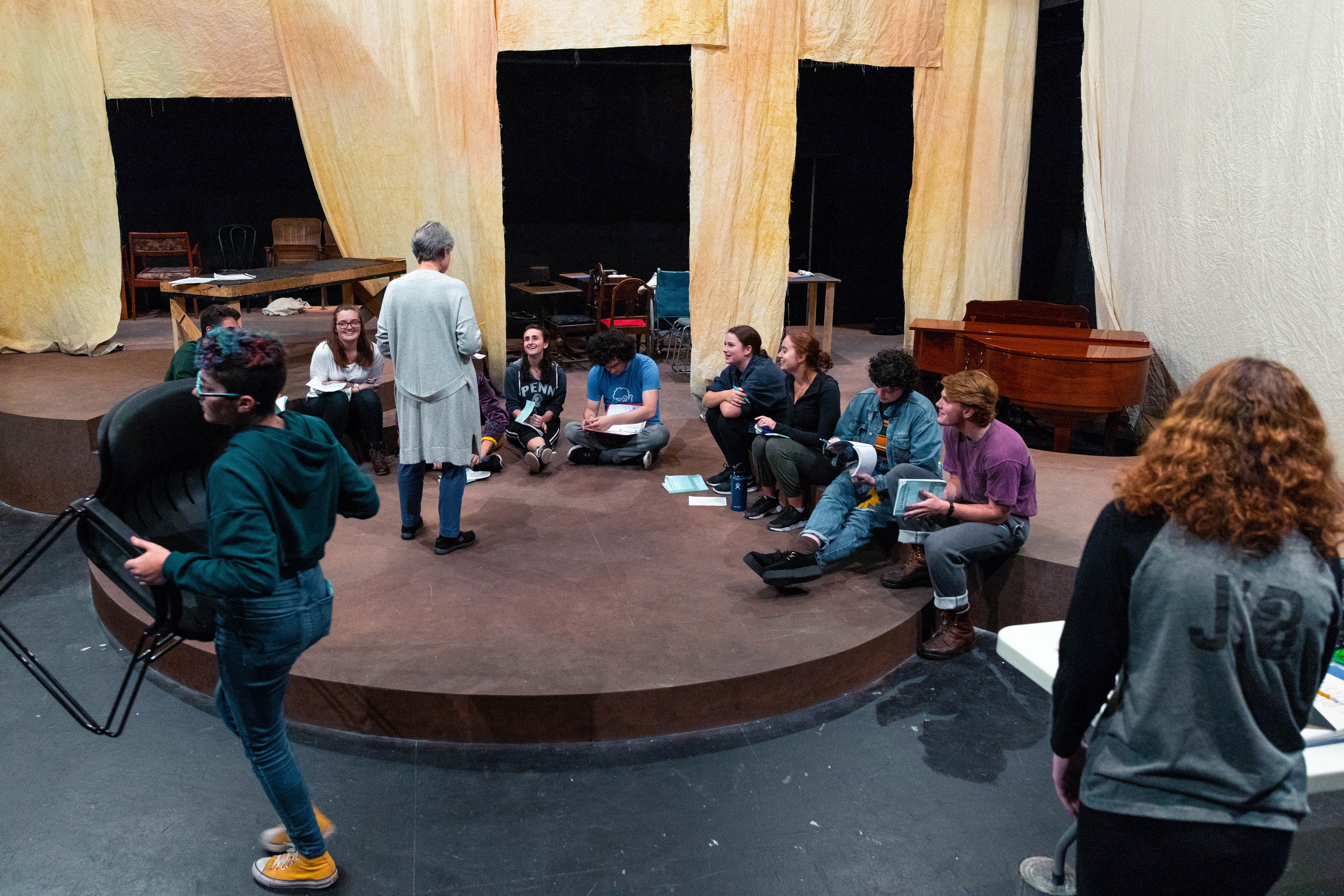 On a rainy, gray Wednesday morning, I sit across from a smiling Mary Harney. Presenting a binder with numerous rainbow post-its sticking out from its edges, she says “Upon my first read, these are the pages where I said: Dance.”

Mary Harney is just one of the few outside faculty members director Marie Glotzbach has recruited for her production of Moises Kaufman’s 33 Variations. The story of this play centers around Katherine, a contemporary musicologist obsessed with discovering the source of Beethoven’s fascination with Anton Diabelli’s waltz. At first, Beethoven dismissed the waltz as insignificant, only to go on to write 33 variations on Diabelli’s theme. Kaufman’s play straddles two time periods: the early 1820’s and the late 2000’s.

In order to help guide an audience through these time shifts, Glotzbach worked with Harney to create an entirely new role for this production: the Muses. Beethoven’s music, which is written in to the play’s text, inspired Glotzbach to come to Harney. “The muses were a concept Marie and I talked about. There’s so much music; how can we thread dance through the play? It was such an abstract concept. It’s been a challenge to figure out how we can use them to forward the story and support it, but not take away from it.” Though this process may not be typical for a theater director, it is exactly how a Harney, an experienced choreographer, is used to working. Harney, an Artist-in-Residence in the Skidmore Dance Department, specializes in modern dance and choreography, “In dance you’re used to making something of out nothing. I love making something out of nothing other than bodies.” She asks herself,  “Bodies: What [type of dance] are you going to make?” What have choreographer Mary Harney, and assistant choreographer Sophia Cucci ’20 made? “In terms of movement what we wanted was the creation of an aura,” Harney comments. “They [the Muses] are transitions. Perhaps they’ve moved from one scene into the next, or they’ve responded to the music. That said, when they get to the end of that piece of music, their inclination would be to continue moving, but that’s when they have to become part of the atmosphere and architecture.” 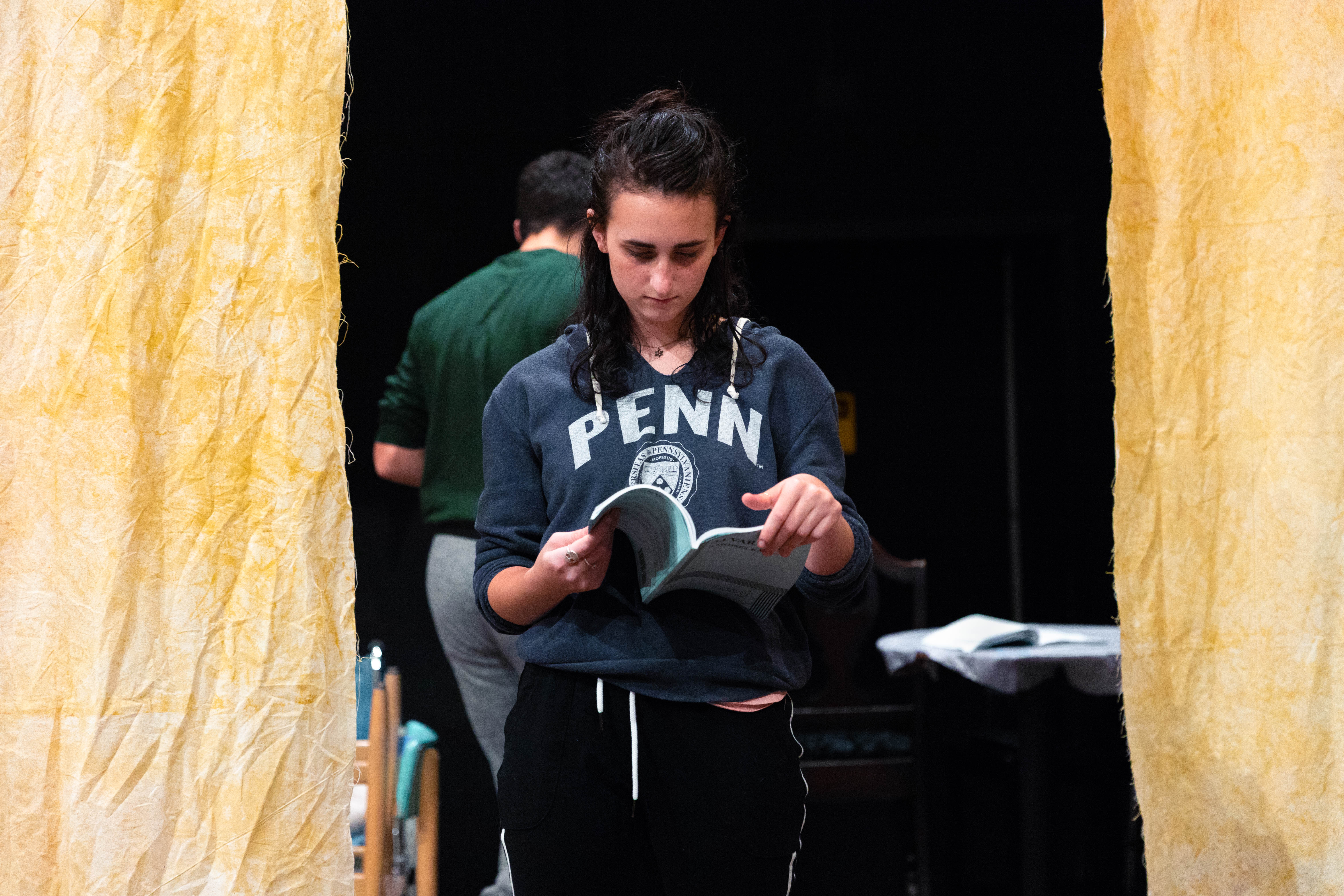 While the Muses embody the music embedded in the play, the characters of the play experience the music in a different manner. Sylvia Stoner-Hawkins, vocal instructor and Artist-in-Residence of the Music Department, comments, “I would think of these variations as a soundtrack to the scene, to help set the tempo and the pacing.”  Glotzbach recruited three music experts to help with the piece: Pola Baytelman, Genna JaeEun, and Sylvia Stoner-Hawkins. Baytelman, a Distinguished Artist-in Residence here at Skidmore, has extensively trained student pianists Josh Binkhorst ’20 and Sophia Zhang ’21 to play Beethoven’s variations throughout the course of the play; Stoner and JaeEun have worked directly with the cast to prepare pieces of Beethoven’s masses (music written for the choir) which presents a whole new challenge.

Genna JaeEun, Skidmore’s new choir director, informs me that “though Beethoven didn’t write much choir music, he was the first composer who put a choir into the symphony [the Ninth Symphony]. Beethoven is the first composer who considered human voices as instruments in the orchestral genre. In that regard,  the masses are very hard to sing.” JaeEun has worked heavily on training the cast through Beethoven’s Missa solemnis. Meanwhile, Sylvia Stoner-Hawkins, an Artist-in-Residence here at Skidmore who specializes in classical voice, has focused on working Beethoven’s Kyrie quartet with members of the cast. Both JaeEun and Stoner have stressed the difficulty of Beethoven’s music and have nevertheless been impressed with the cast’s work and commitment. JaeEun recalls, “I had one or two rehearsals individually with the students to teach them. They picked up their parts quickly after those rehearsals, so we were able to quickly go into an ensemble.” JaeEun emphasizes the added level of difficulty with this piece, since 10 singers do not equate to the structure or sound of a choir. Stoner recalls her surprise even farther back in the process to the callbacks: “I was really impressed by the openness of the students. When I work privately with students, there’s a bit of a hesitancy to sing out, and at callbacks I was blown away that these kids were just going to sing.” Stoner also emphasizes the music’s difficulty level, “especially considering that some of them [the cast] had never sung classical music before.” Working from an open mindset, the cast has overcome many musical challenges. 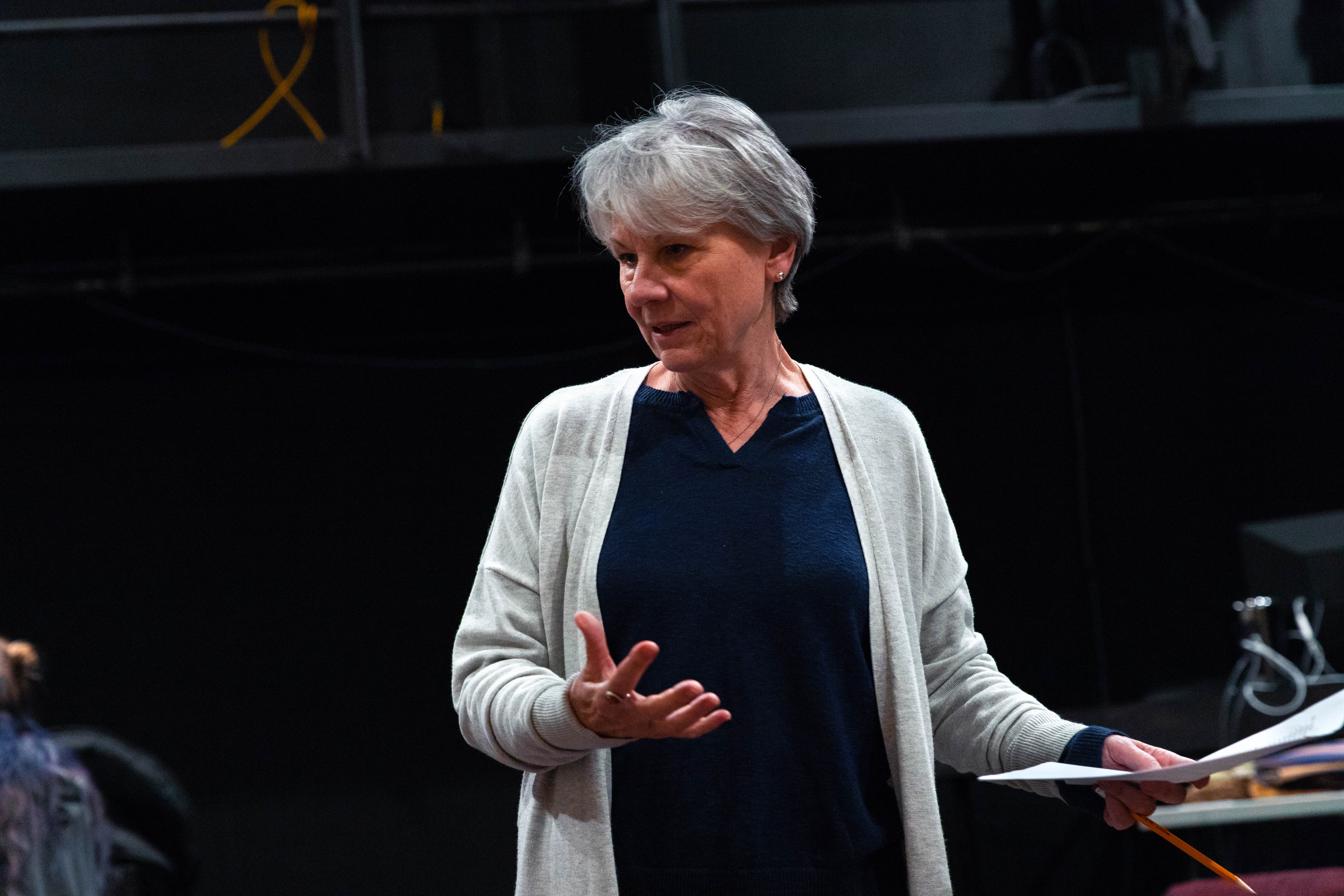 Under the direction of Marie Glotzbach, this production of Kaufman’s 33 Variations is set to be a massive collaborative effort for audiences to behold. Glotzbach expertly fills this demanding production with music and adds her conception of its physical embodiment. As the play moves back and forth between the early 1820’s and the late 2000’s, grappling with physical disability and disease all while underscored by Beethoven’s 33 variations, Mary Harney assures us: “It’ll make sense when you see it.”

Nina Slowinski ’19 is a staff writer for the Living Newsletter.