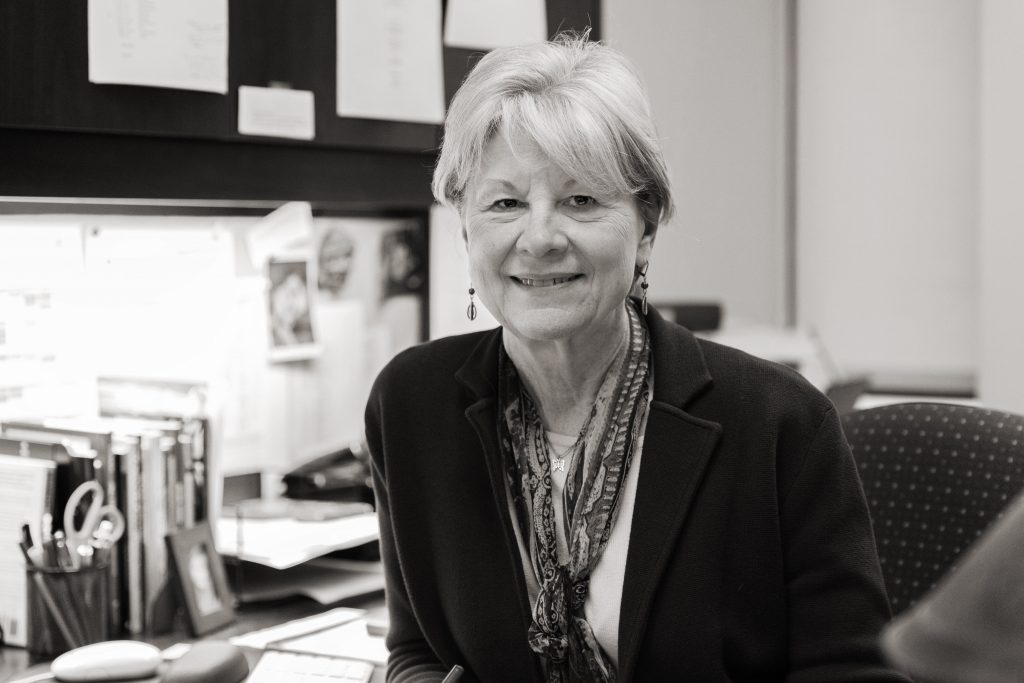 If there’s anything to be taken away from talking with Marie Glotzbach, it’s the power of truth. She emphasizes truth in everything she does, from casual conversation to her many theatrical works. Glotzbach and I were able to meet on a rainy Friday morning to shed some light on her motivations and inspirations. The great thing about talking with Glotzbach is that, like any good director, she can get right to the heart of what she wants to say in as quick and efficient a way possible. By the time we had finished talking, I had gleaned about five conversations’ worth of insight in just those fifteen minutes.

Glotzbach grew up in International Falls, Minnesota, not far away from Frostbite Falls (which, it surprised me to learn, is not just the home of Rocky and Bullwinkle). She had never initially planned on pursuing theater before auditioning on a lark her first year of high school. She was cast, and in her words, “I never looked back!” Glotzbach’s focus jumped from acting to management until finally settling into directing in college.

She liked the idea of directing because, as she says, “I am very much a ‘big picture’ person, and I loved the notion of imagining a story from the perspective of all aspects of the theater, and not just from the acting perspective. So, the notion of developing a concept, a fundamental foundation from which an entire production may be imagined and articulated, is very exciting to me.”

The spirit of collaboration in theater is one Glotzbach likes to emphasize. In all her productions, especially her most recent one, she finds a certain joy in seeing how people from all kinds of disciplines come together to create one unified project. She’s very much like a conductor in that way, which could explain why a play about classical music appealed so much to her. Besides the various disciplines of the theater department (actors, stage managers, various designers and builders), Glotzbach managed to get heavy involvement from the music department. This came through in having two pianists bringing the thirty-three variations themselves to life and having voice professor Dr. Sylvia Stoner-Hawkins teach the cast how to sing the Kyrie eleison.

Glotzbach did not expect to become a theater professor. After pursuing graduate work at a variety of colleges, she married eventual Skidmore President Philip Glotzbach. This, in turn, led to more college residencies, including becoming Artistic Director of the Redlands Theater Art Company in California. One thing led to another, and the Glotzbachs found themselves at Skidmore in 2003, where Marie teaches acting to this day.

Glotzbach has worked in a variety of scopes, from smaller and more personal shows such as Bacchanal and Trifles to the large, expansive scope of opera, in the form of The Mikado. She also believes in theater as a mechanism for social change and promoting important thoughts and ideas, most especially through a production of Moises Kaufman’s The Laramie Project. It was another Kaufman piece that would become Glotzbach’s second Skidmore directing credit, 33 Variations, following Dancing at Lughnasa in 2015.

33 Variations is what Glotzbach calls “a heart journey,” one that synthesized all the things she loves about theater. She knew Kaufman not just from directing The Laramie Project but also his work with the Tectonic Theater Company and Moment Works. Despite the script already existing, which it had not in the process of TTC’s hands-on play development, she was able to recreate their style of work through promoting the personal journeys of each person involved in the production. From the pianists to the designers and actors, each person played their part in bringing the story to new, exciting life. The universality of Beethoven and his creative journey touched Glotzbach. Plus, as she adds, “How could you not want to be surrounded by Beethoven’s music?”

There is no one influence Glotzbach can point to as a guiding light in theater. That union of various disciplines coming together to tell a singular truth is what theater is all about to her, and that comes through in who she claims influence from: Arthur Miller (a playwright), Robert Edmund Jones (a designer), Anne Bogart (a director), and Robert Brustein (a critic, producer, and educator). It takes all kinds to bring a show together, and Glotzbach knows that there can never be one field to take inspiration from.

But above all else, the reason Glotzbach finds theater so rewarding and worth sticking to is its commitment to telling the truth. “I think it’s a place of honesty,” she says. “I think it’s a place where truth is revealed. I think we all have to dig to our inner selves, the core of who we are, [and] know the universality of our place and the human journey. It’s not always easy,” she adds, “but it’s a place of beauty.”

The commitment to being true to yourself is something she thinks applies to any field someone wants to pursue. Glotzbach says if you aren’t honest with yourself about what you want to pursue, you’ll never get anywhere: “We should do theater or whatever we choose to do because it is what our heart tells us we have to do. […] You do whatever you do not because of what you think you have to do or someone wants you to do, but because you know it’s truthful for yourself.”

That sense of honesty pervades all of Glotzbach’s work and breaks down the idea of theater as any sort of artifice or cavalcade of egos and phoniness. Theater is about laying your soul bare, knowing you have the support of a whole team of individuals committed to the same goal. I can’t think of anyone more committed to what they do than Marie Glotzbach.

Joe Newman-Getzler ’21 is a staff writer with the Skidmore Theater Living Newsletter.