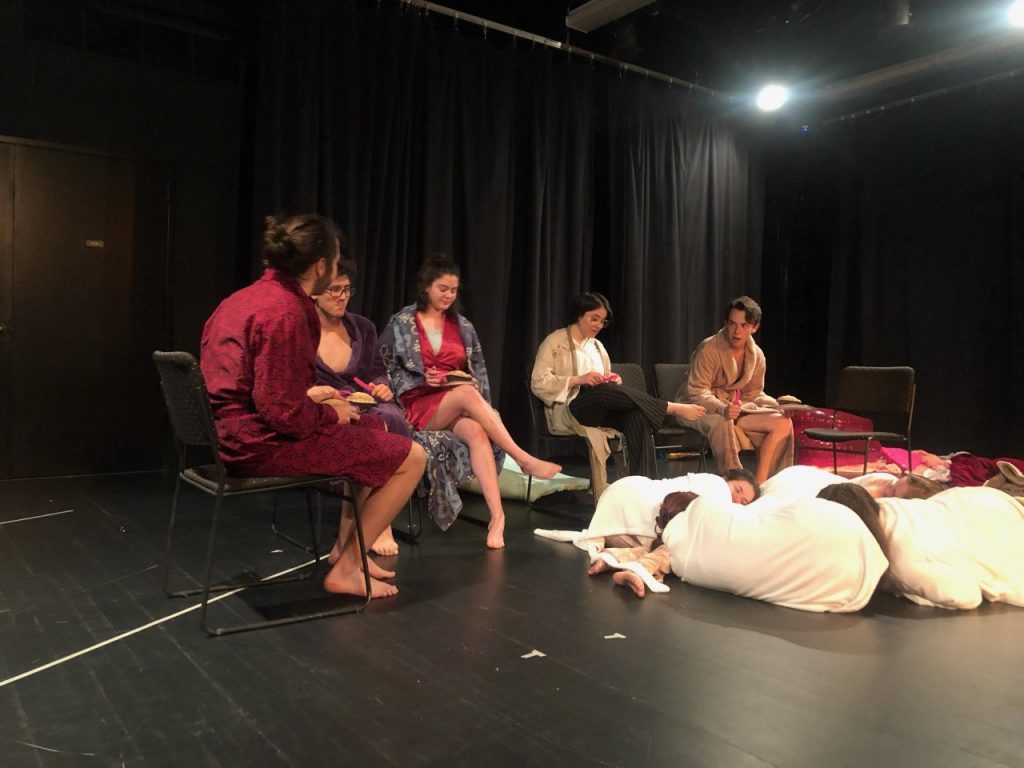 An invigorating horror/comedy several years in the making, Playdate by Kallan Dana ’19 is the hallucinatory story of the last day of Hugh Hefner’s life. Dana began writing the show at the National Theater Institute in the fall of 2017, continued her process as a playwright’s lab in the spring of 2018 at Skidmore, and further realized her vision while working at the Dixon Place Theater in New York City in August 2018. All that work is culminating in this semester’s studio lab production. I had the opportunity to sit down in the lobby of the JKB and talk with actor Emma Goodman ’21, who has been with the show since its inception. Bubbly yet poised, she graciously spoke with me mere hours before spring break commenced about the show’s evolution and the process of bringing Playdate to the stage.

The Bunnies in the Playboy Mansion function as a group rather than as individual people, providing an abstract representation of the power dynamics within the Playboy world. According to Goodman, “they sort of function as Hugh Hefner’s conscience.” Commenting on the difference between working with Dana the playwright versus Dana the director, Goodman said that she grew to understand her character in new ways through the process of staging the performance. “My role is presentational and highly physical,” Goodman stressed. For example, the actors participate in the lighting of the production, carrying and manipulating lights throughout the show. 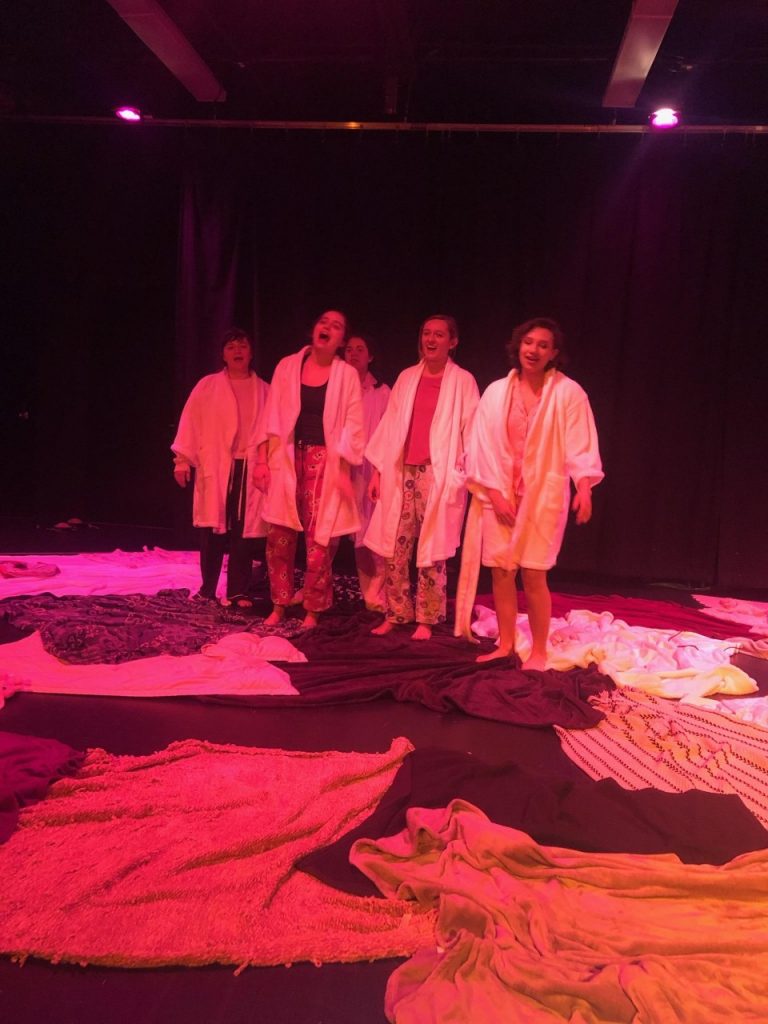 Goodman is the only member of the original cast still working on the show. “It has been cool to work with a completely different cast,” she said, explaining that Dana allowed each new cast member great freedom in placing their own interpretation on the characters. However, she commented on a sense of consistency despite the ongoing changes. “I feel like the script and who these characters are really hasn’t changed,” Goodman said. And the cast and crew have been instrumental in determining the direction of the show’s growth. “Working with Kallan is very collaborative,” Goodman said. “One of the first things we did in rehearsal this semester was set up and block a scene with minimal guidance.”

While stressing that Dana has maintained a clear vision from start to finish, Goodman expressed that actors were allowed to place their own interpretations on the text, preventing the rehearsal process from becoming dogmatic. “Kallan has never sat us down and said ‘this is what this show is about,’” Goodman said.

“As one of the Bunnies, people might not expect the ways that my character has power and agency,” Goodman said. She expressed that audiences should remain open to having their assumptions about gender roles and sexual power dynamics challenged. However, far from being somber and serious, the tone of the show is defiantly comedic. “There are scenes that I have seen so many times,” Goodman said, grinning, “and I still laugh. It’s still funny.”

Playdate will be performed from March 21st through the 23rd in Studio A. Admission is free. Tickets are currently sold out; to reserve a spot on the waitlist, email labtickets@skidmore.edu

Basil Lilien is a Senior staff writer with the Skidmore Theater Living Newsletter.