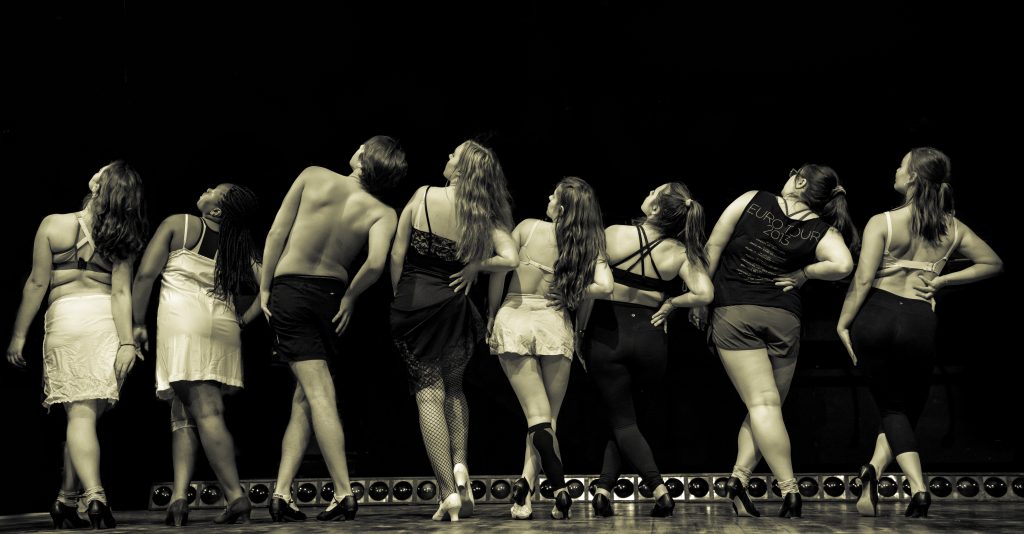 For the first time in six years, the JKB is putting on a musical. Cabaret, directed by John Michael DiResta, promises to be a wild ride, exploring politics, music, and sexuality in Berlin in 1929. Based on the semi-autobiographical novel Goodbye to Berlin, by Christopher Isherwood, the show revolves around the Kit Kat Klub, a nightclub with cabaret performances, and the relationships that unfold there amidst the backdrop of the rise of the Nazi party.

The experience of putting on a musical is new to many in the Skidmore Theater community, and one of the positive consequences of doing a different kind of show is that it has provided an opportunity for many talented newcomers to the theater to shine. I had the opportunity to interview two actors and one member of the orchestra from Cabaret who are performing in the JKB for the first time. 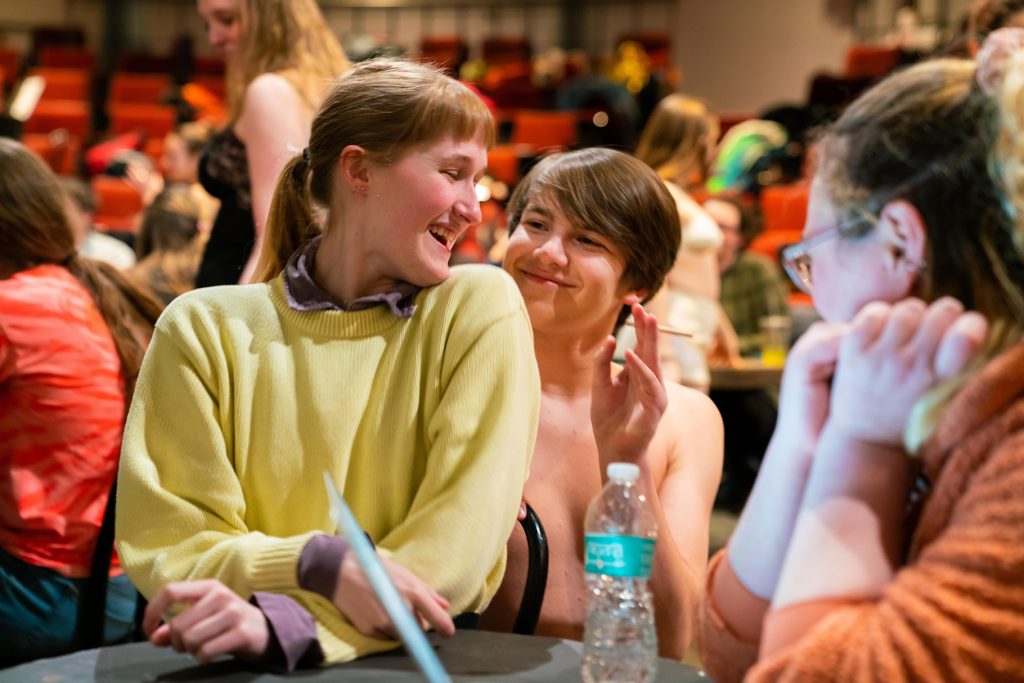 I met up with Pat McDevitt in the lobby of the JKB, and then we walked over to the library together to sit down and talk. As we walked, we chatted about his first year at Skidmore so far. McDevitt is an intended business major with a music minor and is heavily involved in the vocal music scene at Skidmore. He sings with the Bandersnatchers a capella group and takes voice lessons, and a highlight of his first semester was singing with the Skidmore Chorus. When we sat down to talk, I asked him what prompted him to audition for the first time, and his answer was his love of singing. Acting is not his primary interest–as he put it, “it’s not what I go out to do”– but McDevitt has a background in musical theater due to his focus on vocal performance and dance. Before coming to Skidmore, he participated in musicals at his high school and performed in community theater for two years.

McDevitt came to the audition process having seen another production of Cabaret just a few months prior–and he hated the show. He expressed uncertainty about whether he wanted to perform in Skidmore’s production, saying that the first production he saw felt “very distant.” However, he is glad he took the chance. “I definitely like it more now that I’m in it and understand it,” said McDevitt. He also said that Skidmore’s Cabaret makes a point of engaging with the audience in a way the first production he saw did not, due to the staging and set design. “In this production it feels more like the audience is attending the club, where the dancers are all there. We’re going between the tables and everything. It feels very immersive,” he said. (Audience members who are especially excited by the prospect of interacting with actors should try to book tickets for the cafe tables located at the front of the audience, although tickets are selling out quickly.)

When I asked him if there was one thing that he would want someone unfamiliar with the show to know going into it, he didn’t hesitate in his answer. “Be prepared to be uncomfortable,” he said emphatically, due to the dark thematic material. However, he said the intellectual challenge is worth it: “I’ve never really experienced anything like it.” 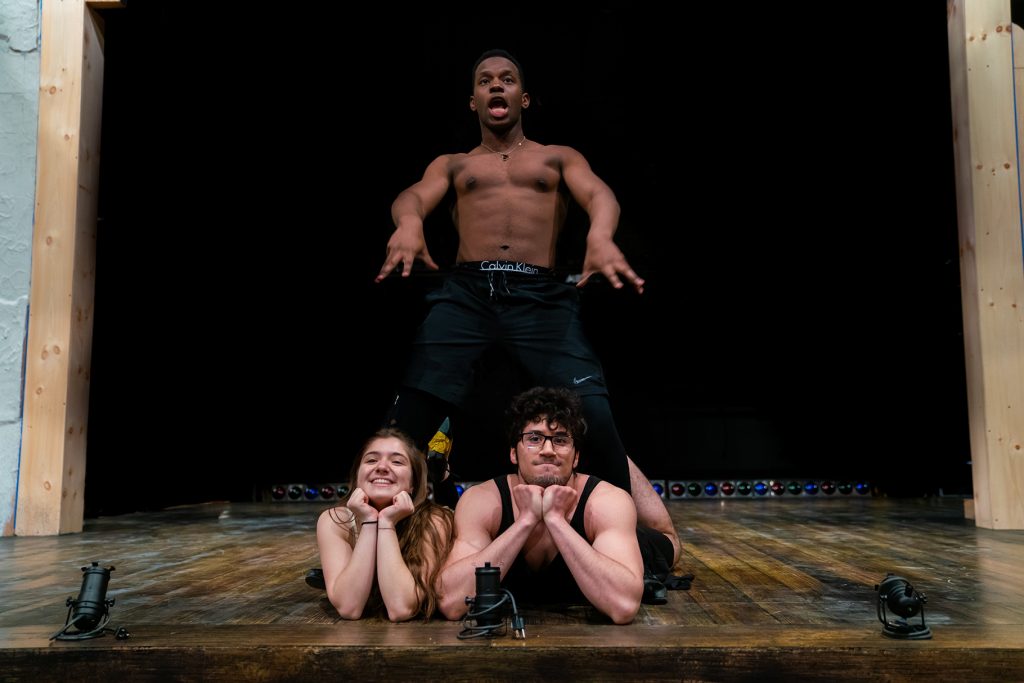 After speaking with McDevitt, I met up with actor Thabi Khumalo in the library to talk about her work on Cabaret. A Sophomore, Khumalo is an Economics major and a Filene scholar with a concentration in voice and an extensive background in opera music. When I asked her what it’s been like balancing the demands of Cabaret with her life outside of the JKB, she said that her biggest challenge has been balancing her work on the show with her work in the music department as an opera singer. She is currently taking a class called Opera Workshop where she is putting together opera scenes. This is an especially demanding test of her range as a vocal artist, due to the differences in style and technique between opera music and musical theater. She said, “getting out of singing classical to singing… musical theater music is a transition that I do on a daily basis.” She went on to explain, “You’re placing [your voice] in different places–not always the healthiest place!–so it’s been more [about] learning how to manage my own voice.” Khumalo said that, despite coming from a different department, she has enjoyed the familiar atmosphere of working with other serious performers during Cabaret. She said, “It’s been great because I feel like everyone in the JKB and the theater department is very dedicated to their craft, and that’s what I appreciate so much about music and the work I do with singing, and to find that here has been really nice.”

When I asked her if there was one thing that she would want someone unfamiliar with the show to know going into it, she said, “Don’t be shocked to see things from our real world and our reality going on in this show. And that’s sort of the most important thing to understand–it’s so much more than just singing and dancing… the important thing about music and theater is that you can make social commentary in the art.” Her other words of advice to theatergoers: “As soon as [the audience] walks into the theater, they’re getting thrown into the show… Expect to be in it just from the get-go.” 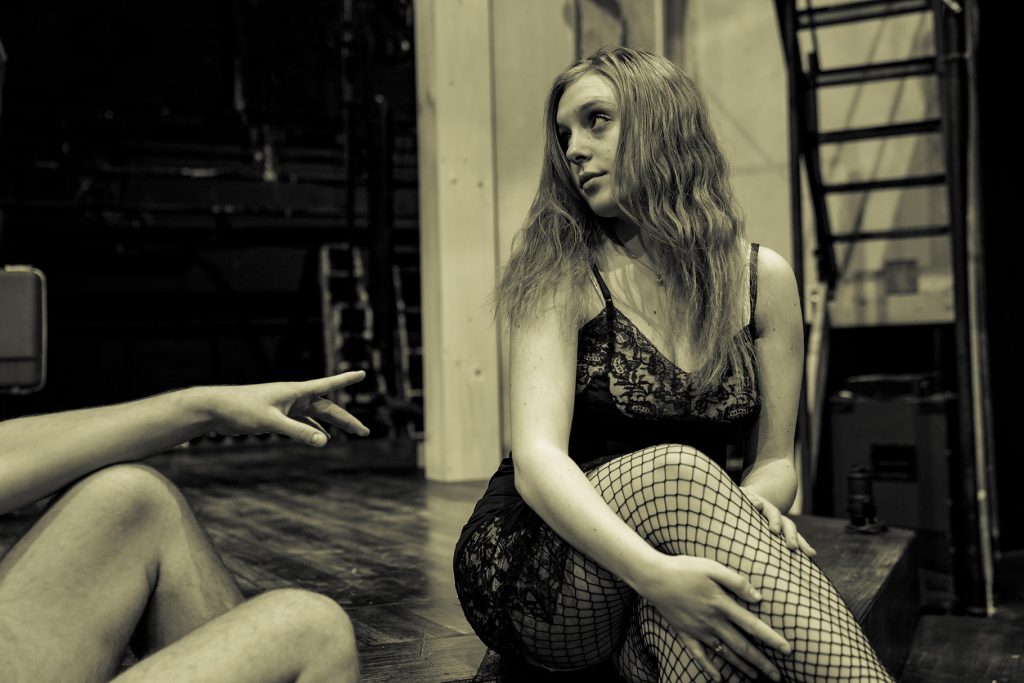 The next day, I returned to the library to meet with Sophia Barrett, a member of the pit orchestra. Barrett is a Sophomore anthropology major and an accomplished drummer. In addition to her work within the music department, which includes private drum lessons, she is currently working on forming a queer band on campus. She was recruited to the orchestra by a good friend who works in the theater department. She asked to audition to be in the orchestra, but her reputation preceded her. Music director Casey Reed accepted her as the drummer in the eight-person orchestra by word of mouth. “It was really cool but also really anxiety-producing because he’d never heard me play, he’d just heard what other people said about me,” Barrett said. She quickly rose to the challenge, learning to play in a different musical style than she usually does. She said, “I’d heard that this musical would be rock-oriented, and I’m a heavy metal drummer. But it is a lot more jazz-oriented, and that is a type of music that I haven’t really had much practice [with]… it’s been a steep learning curve for that, but the first rehearsal with the cast and the orchestra seemed to go really well.”

Barrett spoke candidly with me about the dedication it takes for her to balance participating in the orchestra with the rest of her life at Skidmore. “I love playing music, and I often go to the drum practice rooms anyway, to just play for fun, but the amount of music is substantial that I had to learn in a short period of time,” she said, continuing, “It’s been difficult learning how to balance a 19 credit schedule, because Cabaret pushed my schedule from 18 to 19 credits, so it’s been a challenge… but it’s been enjoyable.” Unlike the actors, who have had many nights of rehearsals, the orchestra meets for only six rehearsals before opening night. This means that members of the orchestra, including Barrett, must put in many hours of independent practice to learn the music in the few weeks before the show.

When I asked Barrett if there was one thing that she would want someone unfamiliar with the show to know going into it, she said, “I’m Jewish, and as a Jew, I feel like it’s an important show, because it is about the rise of the Nazi regime… And the show is actually on Passover, which I think is an interesting choice because Passover is all about the liberation of the Jews from slavery. Just keep the cultural significance in mind, because it’s still a bit of a relevant topic now.” 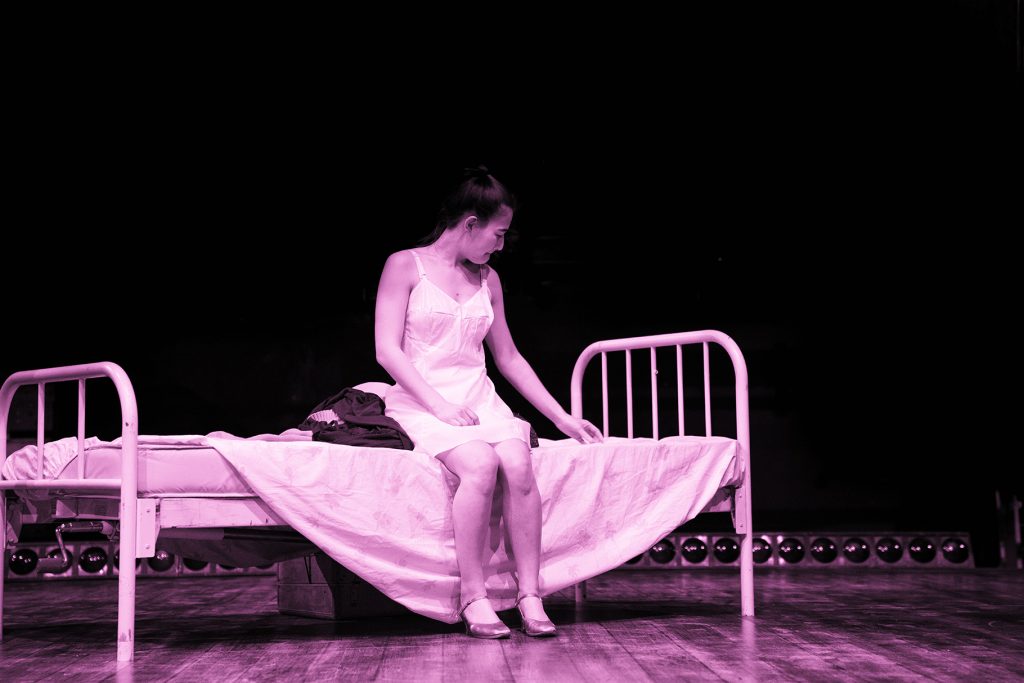 Putting on Cabaret has demanded intensive collaboration, dedication, and effort from everyone in the cast and crew. The result is an invigorating, challenging show, and audience members will no doubt make connections from historical events depicted to our social and political climate today. Of course, they can also look forward to enjoying several hours of energetic song and dance from some of Skidmore’s most talented artists.

Cabaret runs from April 12 – 14 and 18 – 20. Tickets can be purchased on the Theater Department website, and cost $12 general admission and $8 for students and seniors. If you need assistance with reservations, please contact the box office by emailing boxoffice@skidmore.edu or calling (518) 580-5439.

Basil Lilien is a Senior staff writer at the Living Newsletter.