This past week, Skidmore Artist-in-Residence John Micheal DiResta organized and directed a Zoom reading of the play Sweat, written by Lynn Nottage in 2015. Despite the obvious challenges of the current age of digital theater, DiResta was able to create a theatrical experience that was not only enjoyable to watch, but extremely moving as well. The importance, power, and urgency of the piece came across and I was able to grasp the message, even through my computer screen.

This play tells the story of working-class, blue-collar individuals in the town of Reading, Pennsylvania and it is told through flashbacks and flashforwards between the years of 2000 and 2008. It centers the friendship of Cynthia and Tracey, one a Black woman and one white, who apply for the same higher-up management position at the factory they both work at. Through her powerful use of stigmatized language and her ability to access the urgency inherent in this small town, Nottage is able to touch on topics of race, class, and individuality in a way that remains exceedingly relevant today. 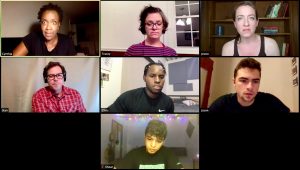 Zoom screenshot from a group scene of Sweat

For this piece, DiResta compiled a cast of student actors, professional actors, and Skidmore Theater faculty. It was extremely impactful to observe how the students, faculty, and professional actors were able to work so well with one another. This dynamic added a certain tension to the piece through which the audience was able to further understand the relationships between each of the characters. As I previously mentioned, despite the struggles of Zoom Theater, I was able to feel the weight and importance of each word the ensemble spoke. I thoroughly enjoyed being able to watch my peers act with professional actors. It was also particularly exciting for me to see faculty acting in this play— some for the first time in my Skidmore career.

I asked one of the student actors, Fabian Rodriguez ‘22, to comment on the experience and his thoughts on playing the role of Oscar. He said: “The virtual reading of Sweat was a new and refreshing experience. Being able to act alongside professional actors and Skidmore faculty is an opportunity that doesn’t come very often and I found it very rewarding. They all just came in ready to go and give all their energy.” 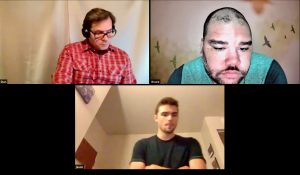 Zoom screenshot from a group scene of Sweat

This was a very exciting opportunity for Skidmore students to observe our own teachers, peers, and other professional actors create something special over Zoom.

Gemma Siegler ’22 is an Editor-in-Chief of the Skidmore Theater Living Newsletter.