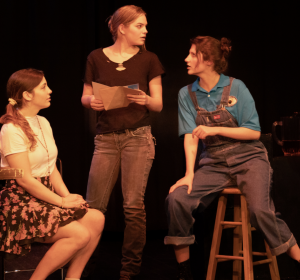 On November 4 & 5, Rebecca Gilman’s Twilight Bowl was performed in Studio A of the JKB, directed by Gemma Siegler ‘22. Taking place entirely in the titular bowling alley, this play details the vastly different lives of six young women as they come of age and leave, enter, and re-enter a small Wisconsin town. The play opens on a group of recent high school graduates celebrating what is revealed to be Jaycee’s (played by Lily Kops ’22) last night of freedom before she begins a two-year prison sentence. The gloomy gathering only increases in tension when the religious Sharlene (played by Keryn Math ’24) suggests they swap stories about Jaycee before giving gifts. As more information is provided by Jaycee’s friend Clarice (played by Mara Little ’24) and cousin Sam (played by Gigi Brown ’24), the audience comes to find out that her crime was helping her father obtain pain medication, which he was secretly selling to high school students. 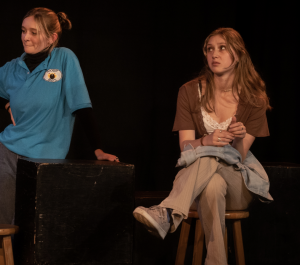 Brielle (Hanna Nyberg ’22) and Maddy (Emma Froelich ’25) meet each other for the first time.

The next characters introduced are Brielle (played by Hanna Nyberg ’22), a girl in the grade above the original four characters who now works behind Twilight Bowl’s counter/bar, and Maddy (played by Emma Froelich ’25), a college friend of Sam’s. It’s Thanksgiving break, the first since the events of the last scene. Maddy explains she is avoiding going home to her family because she has just gotten an abortion. Sharlene, Clarice, and Sam enter, returning from a visit to the prison where Jaycee refused to come out to see them. Sam complains about the stresses of trying out for her college bowling team, we learn that Sharlene has been visiting Jaycee regularly and being seen by her, and Sharlene shames Maddy for her abortion. 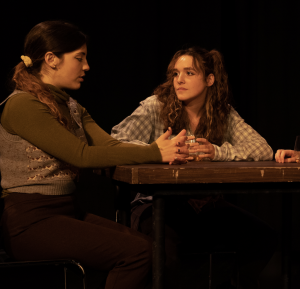 The next jump in time brings us to May, two years and six months later. Sam is now a star bowler on her college team, Clarice is working with Sharlene at a retirement home, and Brielle has marriage in her future. Jaycee has been released from prison and arrives, seeing several of them for the first time since the opening scene. With Sharlene’s religious guidance, Jaycee is now sober, Christian, and has recently started a job at the old folks home.

The five young high school graduates are now young women, each on a different path, but all existing, for now, in the rundown bowling alley of their hometown. Rebecca Gilman’s play highlights the realities of working-class life where there’s little hope for upward social mobility. Just as the bowling balls are thrown and returned only to be thrown again, these women will go to work day after day to stay afloat in a world seemingly devoid of opportunity. The opioid crisis is a backdrop for all of this, adding even more hardship and struggle for those like Jaycee who got swept into the storm unwillingly. 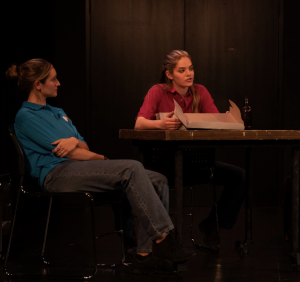 Yet, even with all these limitations, each character has found a way to make something of her life. For many viewers, especially a Skidmore audience, this may seem like a play about hopelessness and futility for the working class. It is that in a way, but it’s also about the agency that these young women claimed for themselves even in the midst of all their barriers. This play challenges viewers to reconsider their definitions of success, as we watch the characters forge their own way in a world that will never concern itself with fairness or justice.