Berlin. New Year’s Eve. 1928. The air is full of sex, champagne, drugs, and jazz as aspiring American novelist Clifford Bradshaw’s train pulls into town. As midnight approaches, Cliff moves into a marvelous, decrepit boarding house and makes new friends unlike any he’s ever met before. Before he can even unpack, they whisk him away to the Kit Kat Klub, where girls dance for him – and boys dance for him! – and the seductive, mercurial Sally Bowles seduces him into a life of joyful sexual freedom. Within days, Cliff abandons all pretenses of naiveté and starts raking in money on the black market, but he soon learns that no windfall comes without a price. As Germany grows politically stratified, the Nazis consolidate power, and violence erupts on the streets, Cliff and Sally must decide how much they can bear to witness. 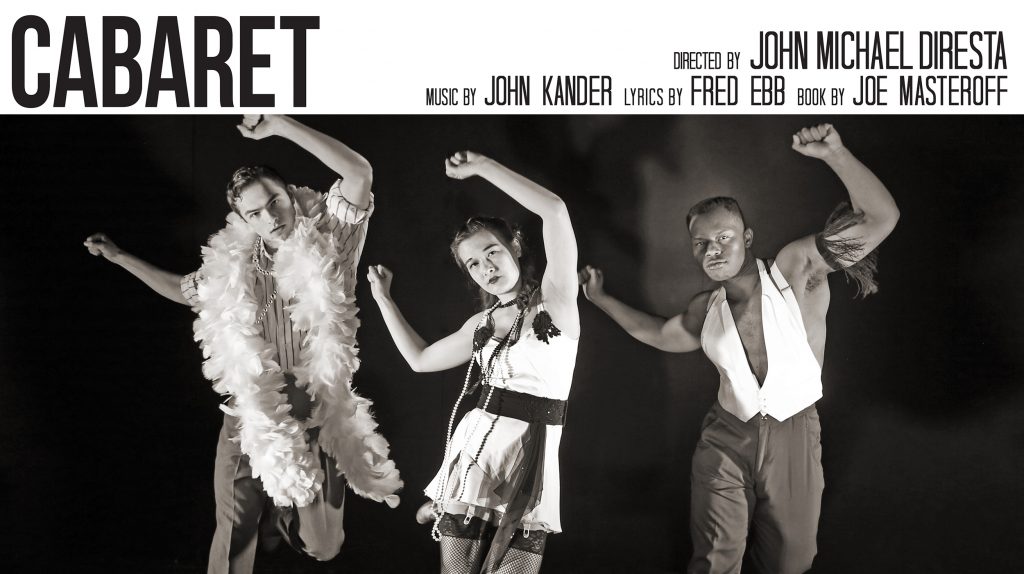 FROM THE DIRECTOR:
“The Nazis despised art. Visual art, performance, and music (minus their most German-nationalist iterations) represented to Hitler a multi-national globalist culture that rejected borders. As the Nazis sought to both fortify and expand their borders, they strengthened these borders from within by burning books, exiling playwrights, sending painters into hiding, and closing performance spaces. It’s only fitting, then, that Cabaret, the great American musical about one ex- pat’s first-hand experience watching the Nazis rise to power, survives 50 years after its writing as a scathing critique of insularity and fascism and a testament to the power of art over tyranny. Our immersive Cabaret welcomes audiences directly into the Kit Kat Klub on New Year’s Eve, 1929, where the smell of sex, drugs and jazz fills the air and anything can be bought for the right price. Enchanted by the possibilities of this new world, Cliff Bradshaw, the not-so-famous American novelist, must decide whether he can bear to stay in Berlin and enjoy all its hedonism as the Nazis’ grip tightens; simultaneously, so must we decide if there is such a thing as an innocent bystander.” – John Michael DiResta

April 12-14 and 18-20
All performances at 8pm, except Saturday April 20th at 7pm
Plus 2pm matinees on Saturday, April 13th and Sunday, April 14th
Tickets are not availabile at this time