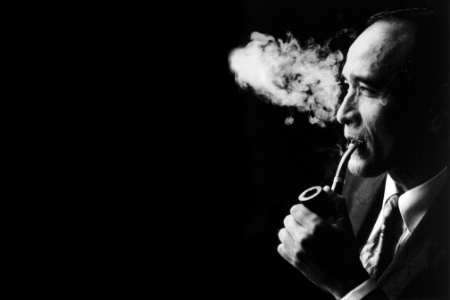 Professor Gautam Dasgupta (affectionately referred to as “Gautam” among students) has a reputation as one of the Skidmore Theater Department’s eminent minds. A leading scholar and theater critic, his knowledge of the arts spans centuries and continents. His classes range anywhere from “Asian Performance” and “American Gangster Film” to what he cheekily calls “Funky Plays.” His appearance—bright silk tie, immaculate sport coat, and sometimes an enigmatic smile—immediately tells of both the depth and levity he brings to the classroom. I recently met with Gautam to discuss his life and work, and ask what his time at Skidmore has meant to him.

Gautam’s arrival in the discipline of theater was “purely serendipity at work.” After high school, he moved to Calcutta to pursue his undergraduate work in engineering (a subject he was “pushed into” by his father, himself an engineer). In Calcutta, Gautam found a “vibrant intellectual scene,” and frequented the many coffeehouses and art film houses the city had to offer. He quickly found a job as an art film reviewer for a weekly publication, giving him an active role in the local arts culture.

In the hopes of studying English or philosophy while working on his graduate degree in engineering, Gautam moved to the United States in the mid-1960s. “My hope,” he says, “was to get to the States and switch”—but the only department that would take him on was the Theater department at the University of Connecticut. It was his adoption into academia by the department’s theatre historian which would begin Gautam’s life in the American arts.

After completing both an MFA in Theater and an MA in English, Gautam came to New York to begin his doctoral work in Theater. “After a while I became a critic for a New York newspaper called the Soho Weekly News,” he recalls, “partly thanks to my first wife [Bonnie Marranca], because she was a music critic.”

As a critic in New York, he became acquainted with a number of directors and performers there, which gave rise eventually to another quality of Gautam beloved by his students: his stories. Anyone who has taken a class under him knows that Gautam seemed to know everybody who was anybody in the New York theater scene of the 80s and 90s. Whether by paying tribute to Symbolism or Futurism in eating omelettes with Yoko Ono or unwittingly starting a (still ongoing) feud with Peter Brook over a negative review, Gautam can often bring the figures of theatrical history into the classroom with him, much to the delight of his students.

In 1987, over a decade after he founded Performing Arts Journal, having seen it flourish as a major force in the world of art criticism, Gautam received a call from Carolyn Anderson, inviting him to the “two days of festivities” and discussions which attended the opening of the brand-new Janet Kinghorn Bernhard Theater. Then, in 1990, drawn by both the nearness of the school to New York and the presence of his friends Robert and Peg Boyers (both still professors in the English department), he joined the faculty of the Theater Department, where he has taught ever since.

Although he initially wanted to “avoid academia for as long as possible,” Gautam quickly found he enjoyed teaching. By far his favorite part of academia is “the students, absolutely,” and particularly what he calls the “spark,” when a student realizes that the potential of art is beyond what he or she first imagined. “Something that I’d never expected…to see that you can introduce students to something, or the fact that no one has ever told them that such great works of art exist…” he said, and trailed off as if in contemplation.

The last question I asked him, knowing its impossible enormity even as I spoke the words, was this: “What do you want your legacy to be?”

We are fortunate at Skidmore that our professors, especially in the Theater Department, are people who do make a difference. And having been taught by Gautam, I feel more than ready to go out into the world and make mine.