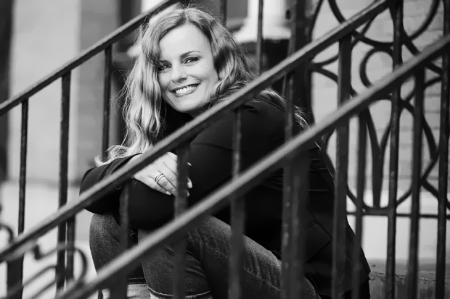 Yvonne Perry, whose course “Acting for the Camera” offers theater students a look at the world of screen acting, grew up in a small town in upstate New York. While applying to colleges, she experienced some of the all-too-familiar doubts for any prospective theater student: Is theater a viable option? However, her parents encouraged her to do what made her happy, so when she received an admission letter to Adelphi University’s Theater program, she gladly accepted. Perry graduated from Adelphi University with a BFA in Theatre in 1988 and then moved to New York City to pursue her acting career, where she has been acting professionally ever since and has done everything from theater to television to corporate narrative.

Amidst many jobs working as an actor, Perry spent time studying in London at the Royal National Theatre, as well as in San Francisco at the American Conservatory Theatre. In 1998, she started work on her MA in Theater History at the University at Albany, where she also began directing and teaching. She taught as an adjunct professor at both University of Albany and Sienna College, and at Union College as a visiting guest artist.

Currently, Perry is working on a production called The God Game in New York City with the Hudson Stage Co. The God Game is a new play in development, although Perry is certain it will ultimately be published. It was first performed in Florida, then at the Capital Reperatory Theatre in Albany, and now in NYC. Perry acted in all three productions and says that she is grateful to have been a part of all of them because she has truly fallen in love with her character. When asked what her all-time favorite production or project has been, she replied with just that: her favorite production is always the one she is working on at the moment because she always “falls in love with the character I’m playing.”

Perry’s biggest piece of advice for anyone who wants to go into the arts is: “Pick your dream, do what makes you blissful”—that is, put in the necessary effort to make that work and to be happy.

On the subject of being a professional in the theater world, Perry emphasized the importance of a strong work ethic. Simply being creative or talented is not enough; making it in the theater world takes a lot of hard work. Perry explained that in her opinion, artists have to work even harder than doctors or lawyers who graduate with a set career path. However, she also believes that at the end of the day it doesn’t really matter if theater is a viable option because if it’s your bliss—what you’re truly passionate about—“You’re going to make it work.”