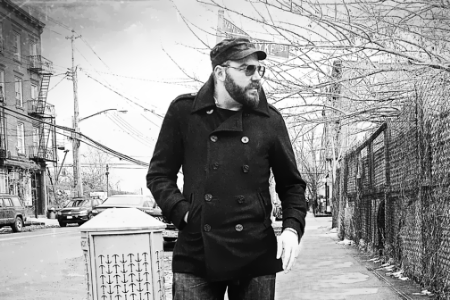 He does not see me standing in the corner. Focused on hanging lights, it is not until eventually decide to clear my throat that Jared Klein looks at his watch: “Lunch time already?” Klein is only a few days away from the first tech rehearsals for American Medea, the first show he has designed lights for at Skidmore since becoming a full time faculty member.

It is no secret that Klein is himself a Skidmore alum. How he ended up back at Skidmore after fifteen years is a lesser-known tale, however. After college, Jared found himself doing a lot of freelance lighting and sound work in New York City, but eventually ended up working and teaching as a Technical Director at Five Towns College and then Adelphi University.

However, it was not until last year, when Skidmore was in search of a new Technical Director, that Klein realized working and teaching at a place like Skidmore was his dream job. According to Klein, “All the work I ended up doing in theater really started with things that I’d learned here, both from the faculty and staff in the department, but also from the students that I met. All my friends that I make theater with, we all came from here.” Choosing a college is hard enough the first time, but Klein chose Skidmore twice, and it is now his job as Technical Director to make sure all of the productions in the department run on schedule and function without conflicts. In other words, he makes sure the entire department works together.

Klein has a lot to give to this department, including pieces of wisdom that have been passed on to him. He says one of the best pieces of advice he’s ever been given is “Aspire towards professionalism.” He often tells Theater Company students to make sure that they are in control of their careers at every moment and understand that their careers start the minute they decide to be a part of the theater industry, not just when they get a degree. He says, “Your energy and your attitude will speak more than your inherent talent.”  But his advice to college students, especially at the beginning of freshman year, is to take the time to learn and let other people help you fill the gaps in your knowledge.

Though he has worked on a lot of productions over the past fifteen years, one of Klein’s favorites was The Living Newspaper, a project based on the Works Progress Administration and the Federal Theatre Project. He was drawn to the project and the characters because of the way they were advancing theater techniques and trying to tell the truth in new ways at the end of the Great Depression.

Klein has much to bring to the Theater Department and plans to keep pushing students towards professionalism, to continue to create opportunities for Skidmore students to get comprehensive, well-rounded training, and to foster the sense of company and community that already exists. While helping students to cultivate their pre-existing skillsets, however, Klein also encourages students to step outside their comfort zones and try new aspects of theater, preparing them for careers as a well-rounded theater artists. Whichever bus Klein is on, we’re all on it with him and it is going somewhere great.