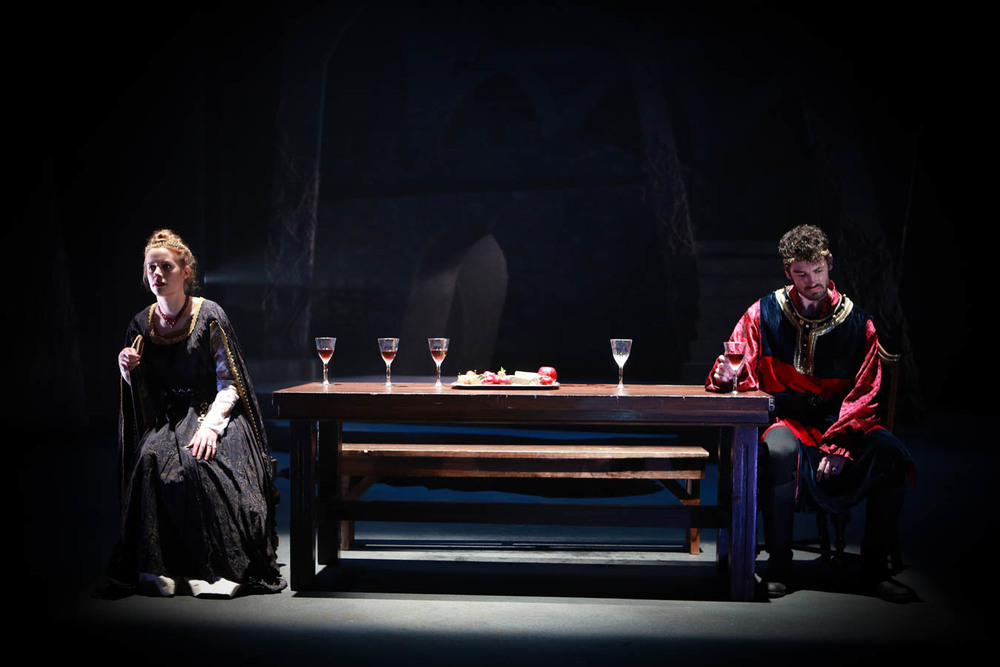 Evy: Sometimes we start rehearsal off by doing planks.

Madeleine: We’ve been doing scene work in chunks, so the people who are in that chunk of the text will be called into rehearsal. Sundays are fight rehearsals. We started by going over very basic fight moves with the entire cast—punches, kicks, slaps, how to fall to the ground safely…

Madeleine: (laughs) Then we moved towards choreographing the various fights we have in the show.

Madeleine: Generally you wouldn’t find the kinds of weapons that we’re using in a more modern play. Macbeth really runs the gamut of getting in intimate moments of violence—whether it’s just a slap or a more heart-wrenching murder—and also having those big battle sequences. Swords, chains…Macbeth is pretty unique in the wide variety of stuff you get to see in its world of violence.

How have your past experiences with Shakespeare influenced your approaches to the process?

Zachary: I’ve had a bunch of previous Shakespeare experience and training—me and Maddy were at Shakespeare & Company together, which we never tire of mentioning and which everyone around us tires of hearing every time we mention it.

Zachary: The Shakespeare & Company approach to doing Shakespeare is very centered around relaxation and sort of allowing the words to enter your body and then exit—it’s not without intention, but it is very focused on being relaxed enough to contain these extraordinary extremes of passion, love, and violence in yourself and allowing your voice to express them. With this process I’ve found myself having to fold that into Holly’s method of doing Shakespeare, which is very outside-in and physical, involving a lot of gestural work. I’ve tried to find a balance between relaxing enough that I can actually embody the words but being present and expressive enough that this very physical staging works.

Woodrow: I’ve been very much motivated by thinking about my experience with Shakespeare as an audience member during my time abroad in London. I saw several shows, a few at Shakespeare’s Globe in London and a few at the Royal Shakespeare Company in Stratford-upon-Avon, and I was just awestruck at the way that those actors approached it. One thing that Holly keeps pushing us to do is to to really look at the audience, to not just generalize and point focus in random directions, but to look at the people in the audience. That’s something that I remember being so moving and engaging when I was watching Shakespeare [in England] is that you really feel connected to the people on stage. They’re speaking to you and they really want to communicate.

Rigel, you were also in London and studied Shakespeare there, do you think that experience comes in for you as well?

Rigel: Yeah, definitely. Something that I learned in London that I wasn’t really aware of as much beforehand was that so much of what you’re doing with his words, he’s already laid out for you in the text. It made me pay attention to punctuation in a way that I really hadn’t before. And I would say that that’s one of the bigger things for me. I saw this production of Henry IV while I was there—it was an all-female cast set in a women’s prison—and it was really incredible for me to see a very epic story told in a very small space. Completely unglamorous. Watching Shakespearean text that has been given a new, modern concept or venue showcases the strength of the text and how well it can function in any setting.

Evy, you’re playing Malca, a feminized version of Shakespeare’s Malcolm. How has the reversed gender of that character influenced the way you’ve approached the role?

Evy: It changes the storyline. That Duncan is passing on his crown is a new and unheard of thing in Scotland in the original play, but in this interpretation not only is Duncan announcing an heir, he’s announcing a female heir, so that tension is a part of the plot and also a part of my character as a young woman who is thrown into an unusual amount of power in the midst of tragedy. She goes from being a young princess to coming to power, and does it all in a typically “feminine” way. Which is all part of the character, and all great fun.

What will audiences coming into the show find most surprising?

Rigel: Well I think certainly this whole rise of matriarchy idea. But I think they’ll find that it does lend itself to the play. Also, the concept of space and time that we’re playing with.

Madeleine: We can’t divulge everything.

Gabe Cohn is a senior English major and Editor-In-Chief of the Living Newsletter. He has also recently contributed to Saratoga Living and Nippertown.