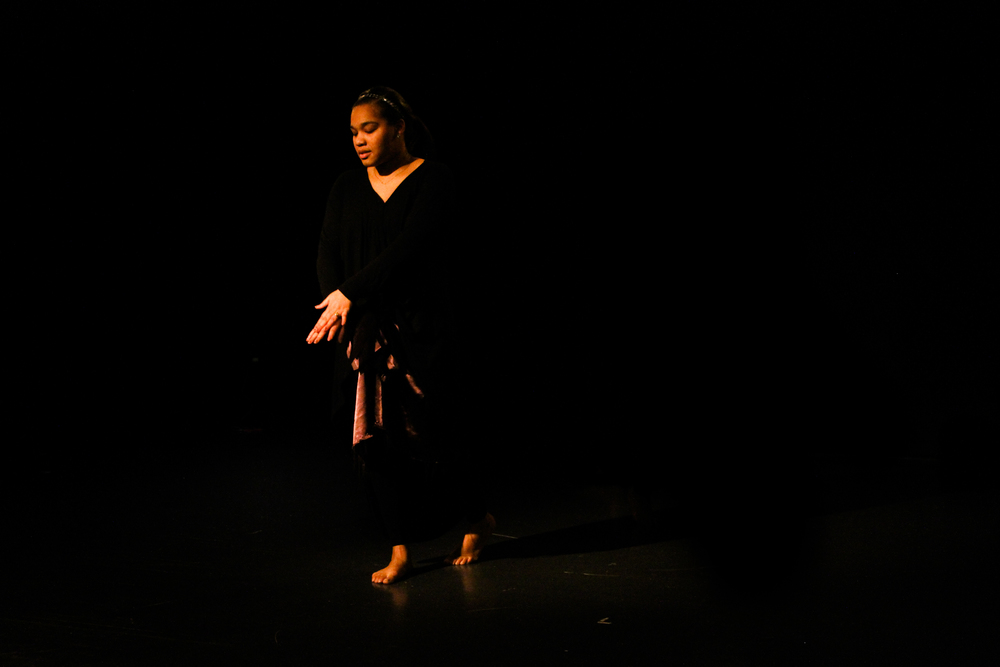 IN FOR COLORED GIRLS, A HUMAN CONNECTION

Midway through For Colored Girls Who Have Considered Suicide / When the Rainbow is Enuf, the “Lady in Green” (Brittany Kent ’18) begins an address to the audience by saying “Somebody almost walked off with all of my stuff.” This sentence becomes the anchor of an entire monologue based around an unspecific “somebody” and the character’s unspecific “stuff.” The “somebody” becomes whatever the audience makes of it, and the “stuff” becomes whatever we decide.

Written in 1976, Ntozake Shange’s “choreo-poem” finds a new significance in the social landscape of 2015, and in this production Director Marcella Adams ‘16 smartly allows the words to speak for themselves. Based around seven women, the piece presents us with a series of poems, delivered as monologues, that speak openly about challenging real-life situations. Domestic violence, racial oppression, and sex are its subjects. Their delivery through the form of poetic monologues affords For Colored Girls a sense of intense, direct communication. The seven women who speak, named after the seven colors of the rainbow (i.e. “Lady in Green”), are less characters than they are snapshots of humans with individual stories to tell. 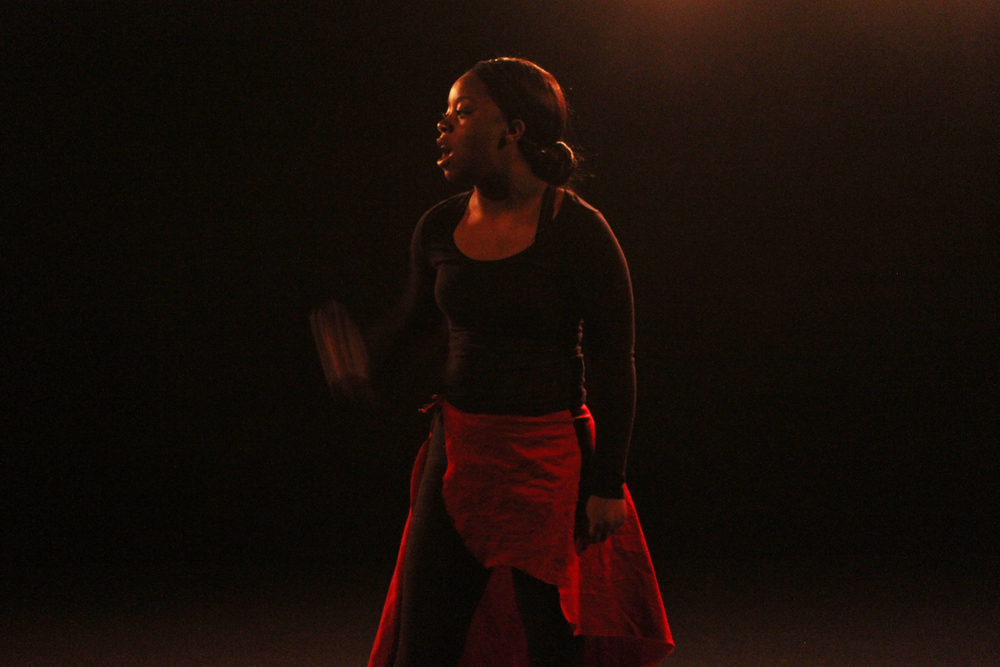 The women’s humanity is taken to heart in this bare-bones production. Speaking directly with the audience, the actors here frequently abandon theatrical conventions, notably the fourth wall, in their quests for the “real.”  While the movements of the seven women are choreographed, by and large they successfully strike a balance between theatricality and realism. In moments where the choreography becomes more complex, which it does at times to illustrate the words of the actors’ stories (as when a dance party is being described in one monologue), it happens subtly and serves as a visual aid. By and large though, the monologues are delivered as direct addresses to the audience. I don’t imagine any audience members left without making eye contact with several actors.

The active abandonment of the fourth wall, combined with the bare-bones design (there was no set, Brandon Bogle ‘16’s lighting design was, with a couple exceptions, subtle, and costumes were all-black with colored sashes for each actor) made for an experience that was theatrical in a different way from more conventional pieces of theater. The expectation of minimalist design is that it will put emphasis on the actors themselves and their performances. And it’s true that the world of For Colored Girls lived completely in its actors, and their words and movements make up the entire piece. But the production reverses the norm in that, in the end, the minimalism and direct addresses ultimately put the spotlight on something else: the audience. By the end, we realize that, by cutting out everything between the audience and the actors, these two traditionally separate bodies almost become one, and the ultimate effect of the production is to represent and spark conversation within the audience itself. It is a challenging and commendable goal, and one that pays off. 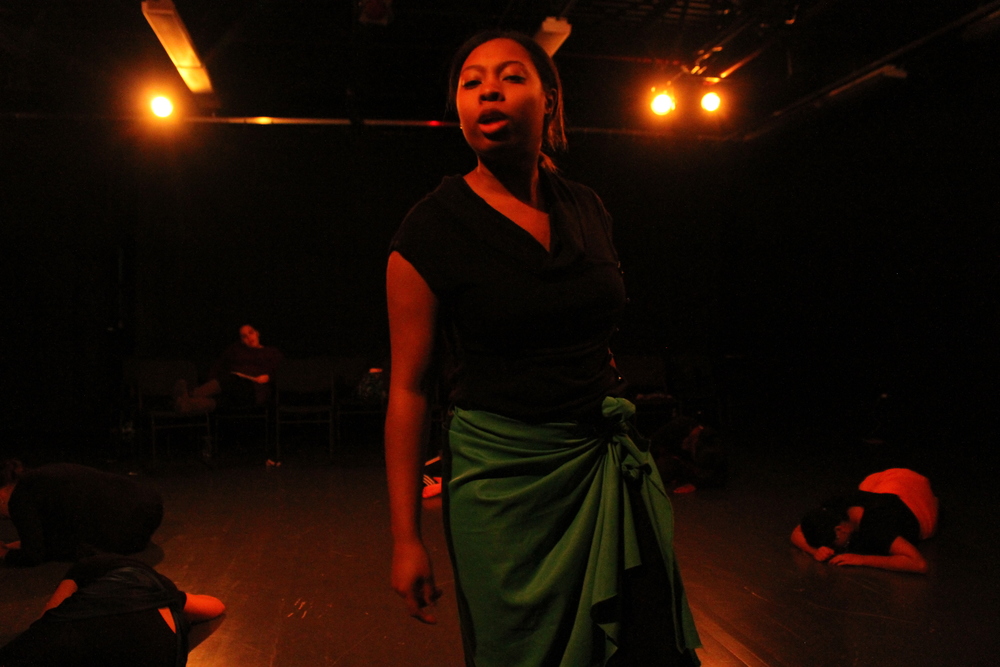 In a Q&A session with the cast immediately following the performance—itself a departure from the norm for workshop productions and a testament to this one’s desire to provoke social dialogue—an overwhelming number of audience members raised their hands not with questions about the process or the show itself, but with a simpler sentiment: a thank you. While the play affected different audience members in different ways, the connections that people made with it all came from a deeply human place. Both the “somebody” and the “stuff” in the Lady in Green’s story become intensely personal as each audience member’s personal human experiences fill in the blanks left by the ambiguous language. In the end, it is this profound sense of humanity that burns at the heart of For Colored Girls. And that’s something that any viewer can relate to.

Gabe Cohn is a senior English major and Editor-in-Chief of the Living Newsletter. He has recently contributed to Saratoga Living and One Week // One Band.

How did you decide which parts of the poems would be heavily choreographed and which parts would just have the actors speaking to the audience?

It just felt right. In rehearsals, I always went back and forth on this topic of choreography. In the beginning, I would restrain myself in regards to choreography as I didn’t want to have the piece be too choreographed. I had to force myself to not think of it as choreography but movement. I always asked myself: Which pieces can be better portrayed through movement? Which pieces can have a strengthened meaning through movement? I would always get up and put myself in the shoes of the actor: What natural choice would I make right now? Sometimes I would try to move with the text at certain points but it did not feel right and it didn’t feel right for the girls either and other times it did. Not only this, there were some points where the text could have been choreographed or not so I left the decision up to the actresses based on what felt right for them as well.

What was behind the decision to include a post-show Q&A? How did having it affect your experience?

I thought that it would be interesting to have the audience speak on what they just experienced given that we did just put them in an uncomfortable setting. I wanted to make the audience uncomfortable because I do believe that true emotions are provoked out of being uncomfortable. The post-show Q&A actually strengthened the piece so much more. One of my main goals for this piece was to break the fourth wall (which is why the audience is on three sides and the actresses interact with them so heavily) but the Q&A helped to further break this. It was fulfilling to hear the impact that the piece has on people and helped me see if I accomplished many of the goals that I set for this piece. We also got interesting feedback that, hopefully, has provoked ongoing thoughtfulness and discussion in the Skidmore Community.

Wholeheartedly I do. Though many people may think that things are different in terms of race relations and even racial identity, in my opinion, things have changed but not that much. There are still vast inherent problems that are still prevalent whether they are talked about or not and, given the construct of this country’s history, they will always remain. It is often shown that people of color go through a different, foreign experience than those who are not people of color and this is very much true. FCG shows that while being greatly marginalized in society, we have to go through the added experience of trying to come to terms with our own identity in a place where it has been previously taught and has historically embedded in its roots the idea that our identity is immoral and an abomination. We have to try to find our place in society when society has fought for us to not have a place. Along with this, we may go through general experiences that are not just specific to people of color, like sexual assault, abortion, heartbreak, death…themes discussed in this piece. FCG takes both of these experiences but adds that not only are these experiences damning within themselves to try to come to terms with, but they are especially damning when you are a woman AND a person of color. These experiences hold so much more when you come from a group of people who have been marginalized. Even though they are extremely difficult circumstances and we do have these added experiences, we are not THAT much different from society. We are very much people who live, breathe, and hurt the same as anyone else, we just have added pressures and experience things differently just as everyone else may have different experiences and pressures: we still bleed the same as everyone else.