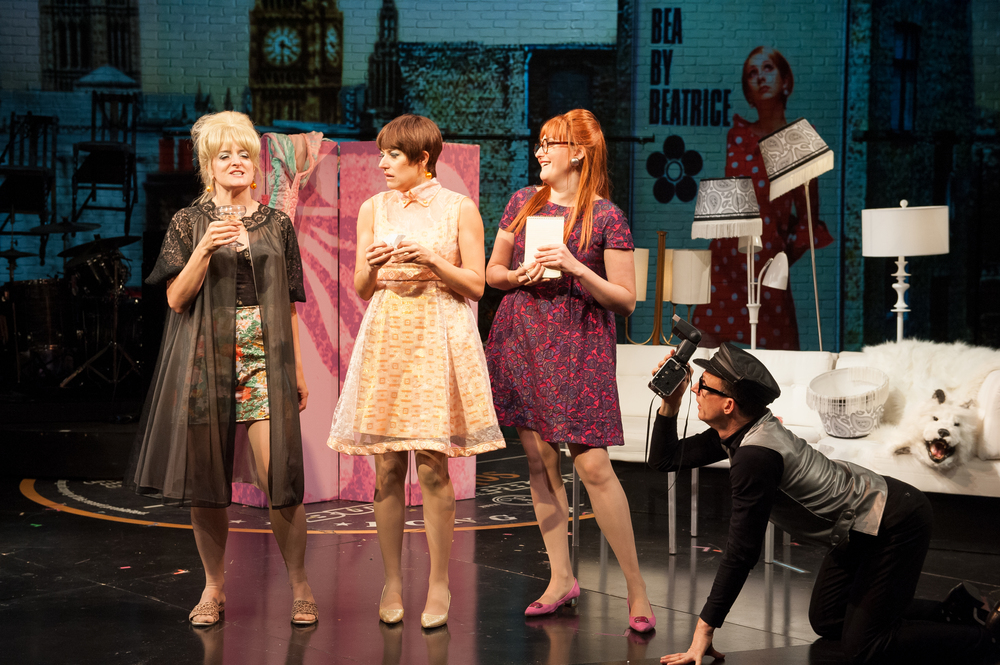 A TABLE FOR THREE WITH KEIRA NAUGHTON AND LIZ WISAN

Keira Naughton ’93 and Liz Wisan ’02 may have nine years separating the dates on their Skidmore degrees, but you wouldn’t know it talking with them. Naughton, who trained at NYU after Skidmore, has acted on Broadway in productions of The Rivals, Dance of Death, and Three Sisters and off-Broadway in roughly ten productions. She has also performed extensively at regional theaters, and is a singer/songwriter in The Petersons. Wisan worked and trained extensively at the Williamstown Theater Festival before getting her MFA at Yale, has acted on Broadway in the Lincoln Center production of Other Desert Cities, and will be performing alongside Frank Langella in the Manhattan Theater Club’s production of The Father, set to begin previews on Broadway in March. She has also written sketch comedy for Upright Citizens Brigade and has done improv comedy at The Pit.

Sitting side-by-side at a Thai restaurant in Chelsea, the two reflect on their professional and Skidmore lives with panache. They both order identical dishes—chicken with basil sauce—and the three of us share martinis with lychee fruit floating in them. They’re in between matinee and evening performances of These Paper Bullets, a play with music which they first got involved with in its premier at Yale Rep. The show, written by OBIE winner Rolin Jones and directed by Jackson Gay, is a self-described “modish ripoff” of Much Ado About Nothing, where Shakespeare’s love triangles are transferred to 60’s Britain, and the story centers itself around a Beatles-esque British Invasion band, “The Quartos.” Green Day’s Billy Joe Armstrong, who wrote the Tony award-winning American Idiot, composed the music. We’re a few blocks away from the Atlantic Theater Company, where These Paper Bullets is having its NYC premier.

Gabe Cohn: When did you two meet?

Keira Naughton: We were kind of living parallel lives. I’ve said a couple times—we’re weirdly similar. All I can say is, she’s awesome.

Liz Wisan: SHE’S awesome. It’s funny, I remember I was in a play with someone around six years ago and he said “you really remind me of my friend Keira, I think you’d really like each other.” And five years later, we ended up in this play.

GC: How did you originally end up at Skidmore?

KN: Phil Soltanoff was the reason I went to Skidmore, actually. I met him at Williamstown. There were a bunch of Skidmore people there. I almost went to a conservatory, but I ended up making the wise decision to go to a liberal arts school.

LW: I think what you get out of a liberal arts education is a curiosity for things outside of your own scope and your own comfort zone. If you just go to a conservatory and all you’re focusing on is yourself and your craft, how are you going to know about different people and different cultures? I think about the geology class that I took, the Goddess in India class that I took, the History of Colleges in America class. You’re going to have to play so many different people from so many different walks of life…you have to have a curiosity about them and about what they’re like.

GC: How does being in a professional show compare to an undergrad experience?

LW: There’s more of a shared language in the professional world. And usually you’re doing a show with people who are much older than you and have a lot to teach you…The teachers always have a lot to teach you at Skidmore, but almost everyone in your show has a similar level of experience to you. There aren’t a huge number of different viewpoints that come to a project. And in the professional world, you could be working with people in their eighties and nineties, people in different countries. People who have worked with the biggest stars in the world. In undergrad it’s hard to see stars as people. Then you work with them, and…they are. People have families, people have kids, people have insecurities.

KN: They’re also more freaked out about having an audience for the first few shows than anybody else. Because there’s so much pressure on them. And I think that also, the more experience you have and the older you get, the harder it kind of gets to do shows. We all have these shows—the first few previews—where we’re just thinking “are we going to get through it? Are we going to remember all the new lines that changed just before dinner?” It’s what makes us love theater. I kind of live for those moments. For me, that’s the most exciting part of it, asking “are we going to get through this?”

GC: How did you end up in These Paper Bullets?

KN: I didn’t audition. I’d worked with these guys before and they said “you should be in this show,” but they hadn’t written the show yet. They said, “we’re not sure what you would play” and then Rolin [Jones] would send me pages and ask, “You like this character? You should play this character, Ulcie.” He convinced me, for better for worse, three times.

LW: I auditioned. But because it was so unfinished, I auditioned for Keira’s role even though she’d already been cast.

KN: Are you serious? I didn’t know that.

LW: Originally my role wasn’t in the show. There were only supposed to be eighteen people in it, but it was so early in the process that they were able to create a role for me.

KN: That’s what Rolin does, he likes to write for actors. So that makes sense.

GC: How do you work on a play that’s unfinished?

LW: We went into rehearsals and I think we got a copy of the script about a week before the first rehearsal. It was a very collaborative process, which is what’s fun about it. We’re actors who like to do more than just be a puppet. We want to contribute. We want to be able to improvise and try things. Some of the best stuff comes out that way. For Rolin, it’s great to have actors who like to improvise and play. And they really encourage that—for better or for worse.

GC: Were you both into theater growing up?

LW: Yeah. I started acting when I was eight, during the summers. Then in high school I did plays all the time. I was really into acting and singing. I actually went to Skidmore because of the music department. I had a double major in theater and music.

GC: You did improv at Skidmore with the Ad-Libs, right? Did you do comedy as well before you came to Skidmore?

LW: Yeah, my high school improv group was, of course, called “Mission Improvable.” Get it?

LW: Yeah, with UCB and The Pit. And some stand-up.

KN: Yeah he was there. The way I found out he was there was hilarious because I was standing on the turntable on stage and as it was rotating I saw him in the audience. In my head while I was speaking my line I was thinking: “Oh, there’s David Miner!”

LW: He was your year?

KN: No, he was the year ahead of me—class of ninety-two. But he went on to manage some SNL people. Produces like any funny thing that’s ever been produced.

GC: Do you remember Skidmore itself well?

KN: I love the campus so much. I was actually on the swim team my first year, and I ended up on the record board—I was in a relay and four of us had a record, so for the subsequent three years people from the theater department would be ask me “are you a swimmer?”

LW: I didn’t even know there was a pool…

GC: It sounds like you both have carried a liberal arts mentality through with your professional work.

KN: I think that kind of education was a really good thing for me. I was so young at eighteen. If I’d gone to a conservatory at that point and not had the education and the experiences that I had at Skidmore, I don’t think I would still be acting. I think I’d be burnt out, and I don’t think I’d be a very interesting actor. Because to work in theater, you need an education. You need to have read books. Some of the most well-read, well-educated people I’ve ever known work in theater.

GC: It seems like you’ve become close with the people you work with.

KN: There are many, many families here. These Paper Bullets is like a family.

LW: Finding your theater family is so important. You do kind of keep going back to the same people over and over again…You find your tribe.

This interview has been edited and condensed. 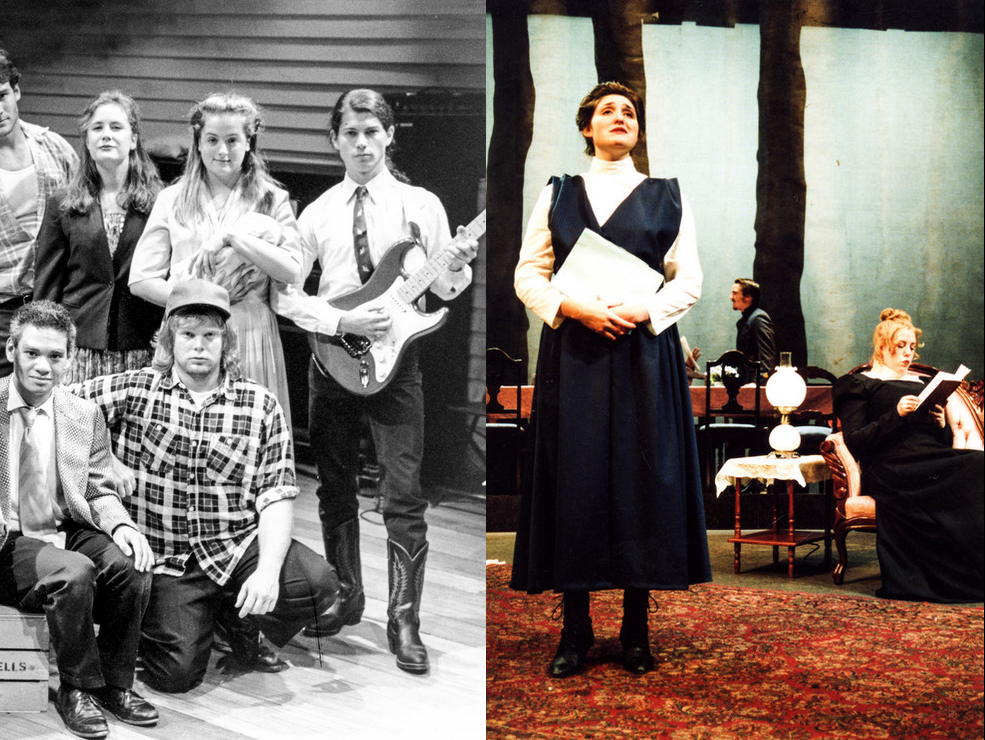 Gabe Cohn is a Senior English major and Editor-in-Chief of the Living Newsletter. He has recently contributed to Culturebot and One Week // One Band.