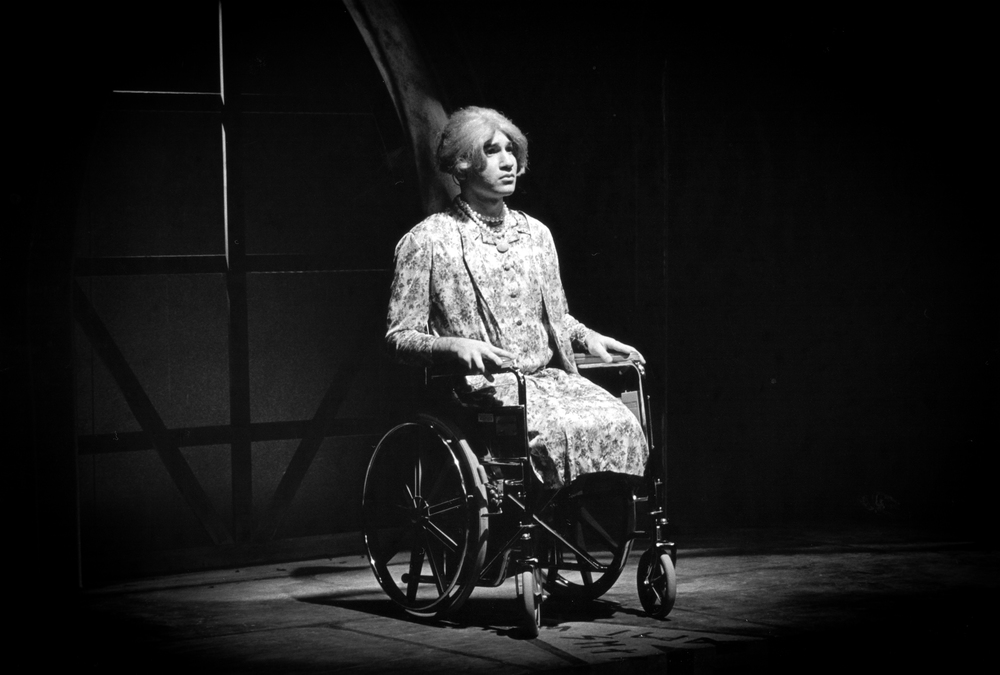 Bernthal as “The Good Woman” in Thomas Bernhard’s A Party For Boris, JKB Black Box, Fall 1998.

MEMOIRS OF A THESPIAN JOCK

It’s 7 a.m. on a Sunday in Park Slope, Brooklyn, and Jon Bernthal, 39, towers over the counter of a local espresso bar in black combat boots, ordering his morning coffee. In a couple of hours, he’ll be on set for Daredevil, a Netflix series, as the legendary Marvel comic book anti-hero “The Punisher.” “When I was a kid, I remember being in a doctor’s office and there was this picture book of Babe Ruth,” he says. “He was at the ballpark and someone was like, ‘Hey Babe, how are you?,’ and Babe’s like, ‘I’m living the dream, I’m getting paid to do what I love, which is playing baseball and eating hotdogs.’”

The analogy between Ruth’s career and his own is fitting coming from Bernthal, who arrived at Skidmore in 1995 as a baseball player. “I was very much a jock, and I’m an athlete at heart,” says Bernthal. “Once I became a professional actor, I saw the relationship with athletics—it’s extremely competitive, you have to believe in yourself when no one else does.” He mentions the relationship between a cast and a sports team repeatedly throughout our conversation. “In one way I have ended up as a professional athlete.”

Unlike Babe Ruth, though, eating hotdogs is not part of Bernthal’s modus operandi. “This is so embarrassing man but I’m on this Punisher diet,” he tells me upon seeing that morning’s muffins and pastries fresh under the counter. As we sit down at a corner table, he unwraps a Kind bar. 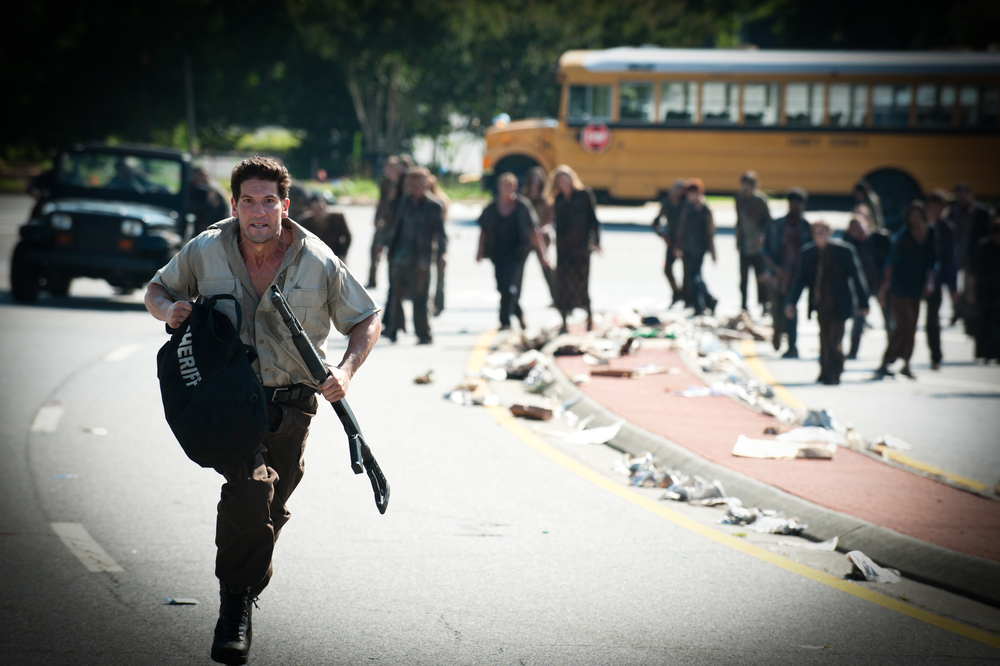 Bernthal’s role in Daredevil is his latest in a series of high-profile screen acting roles. In 2010, Bernthal had a breakthrough when he was cast as Shane Walsh on AMC’s The Walking Dead, which he acted in for two seasons. This was followed swiftly in 2013 by a role in Martin Scorsese’s The Wolf of Wall Street, acting opposite Leonardo DiCaprio and Jonah Hill. Such successes, he says, have unexpectedly felt closer to his work at Skidmore than earlier roles. He talks about his first television work, which involved acting bit roles in soap operas, “At the beginning of my career, I did T.V. series where people had phoned it in, and I knew that wouldn’t do it for me.” It contrasted, he tells me, with the feeling he got at Skidmore. “Being directed at Skidmore, students came into rehearsals knowing ‘We’re doing a play on the mainstage, this is extremely important.’”

The core takeaway from his undergraduate experience, Bernthal says, was “to really believe in the art you’re making and the people you’re making it with.” He continues, “To me, the better things I’m getting to be a part of now just get closer to that, not further away.” In that sense, he says, the type of work that he’s doing now is a bit like the “Skidmore mainstage” of professional screen acting. “When you work with Scorsese, you’re coming to work every day and every person is coming in knowing they’re working on a Scorsese film.  There’s an unbelievable respect. In that sense, there are huge similarities.” 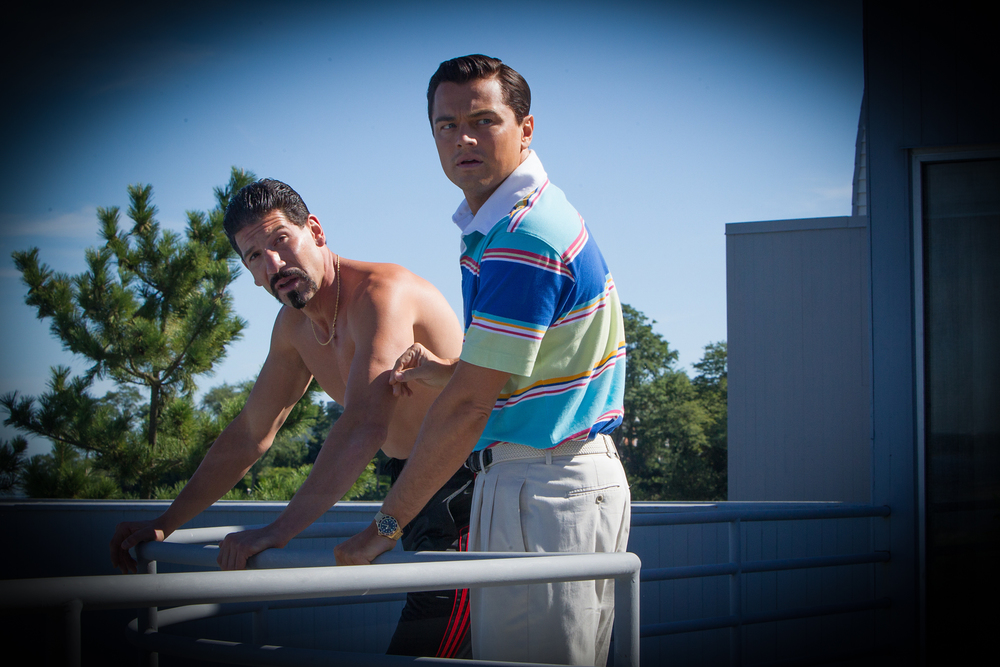 Bernthal and Leonardo DiCaprio in Martin Scorsese’s The Wolf of Wallstreet (2013). Property of Paramount Pictures.

Bernthal’s beginnings as an actor happened by accident. “I was a freshman athlete from [Washington, D.C.]. I came into Alma [Becker]’s Intro Acting class thinking it would be a huge lecture where I could just sleep. The first assignment was to bring in an object that you really care about and explain it to the class.” He laughs. “It was slowly but surely getting to be my turn and I had forgotten to bring anything, so I grabbed my catcher’s glove and I just launched into this story about how my mother had given me this catcher’s glove on her deathbed—my mom’s alive and well in Washington.” He goes on: “All of a sudden, I look up at the class and everyone is crying, and I’m crying. And then after the class I talked to Alma about it and I was so ashamed that I had, like, violated the sanctity of the studio and I had used this unbelievable power that I’d just discovered in that moment to manipulate people. Alma told me ‘you have something’ and it was right then when she said ‘I want you to come in and audition for my play.’”

Bernthal’s first-ever acting role was that year on the Skidmore mainstage, where as a freshman he played Roger Chillingworth in an Alma Becker-directed production of The Scarlet Letter. “Everybody else was a senior. It was a heavyweight group of actors that I got to learn from” he says.

Bio from The Scarlet Letter, Spring 1996. “It was my first play,” says Bernthal. “Where The Cross Is Made is some play I tried to do in high school and got kicked out of because I never went to rehearsal.”

Quickly, Bernthal got involved with Josh Chambers ’98, Sue Kessler ’99, Noel Allain ’98, and others in a student-created company, Fovea Floods. “I basically stopped doing anything else,” he says. “In a semester we would be doing whatever the school show was, taking theater classes, and doing shows at Caffe Lena and then at the same time be doing a show down in Albany or Washington, D.C.” Bernthal’s delight is palpable. “It was a very exciting time,” he recalls. “When we’d do shows at Caffe Lena, everybody would be there. It would be like a happening in Saratoga. There was this unbelievable support among the faculty for us.”

For Bernthal, nobody was more supportive than Alma Becker. “I just don’t really even have words to describe how important she was to me” he says. “She became such a force in my life. Alma was as close to mom for me as anyone else outside of my own mother. She could make you feel as big as a mountain or as small as an ant.” Becker, who would cast Bernthal in his first-ever leading role as Remy Marko in the Fall 1997 mainstage production of A Slight Case of Murder, was to him a “pillar of what being an artist was about.” During The Walking Dead, she would visit him in Atlanta. 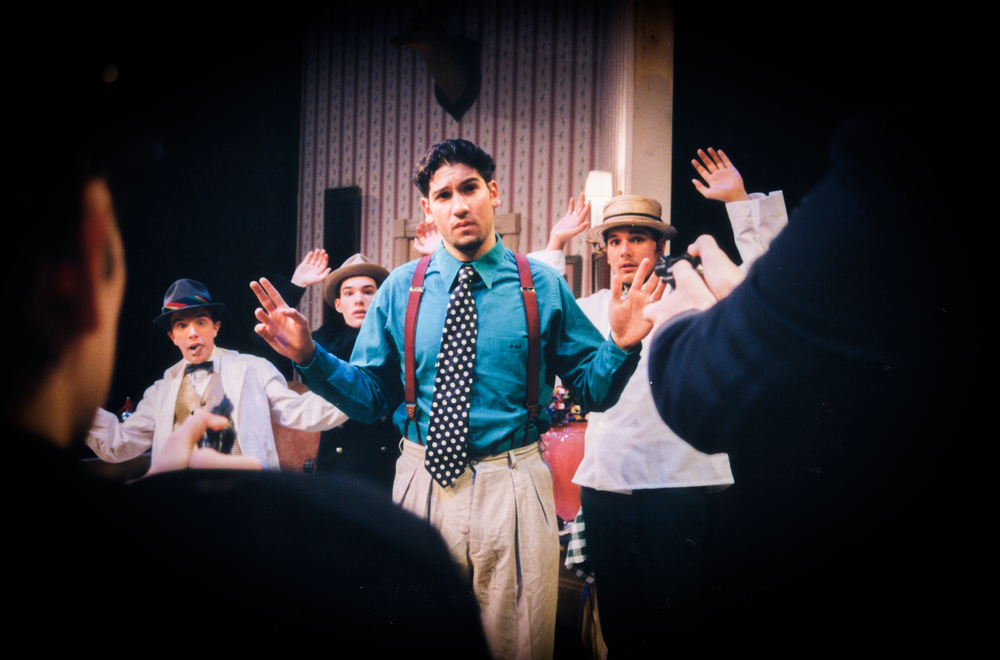 At this point, I pull out a stack of programs that I’d brought with me—all the department shows that Bernthal had been in while attending Skidmore. He picks up a program from the Fall 1998 production of Bertolt Brecht’s Caucasian Chalk Circle, talking about how the department gave him the opportunity to explore a wide variety of roles. “Where else is a twenty-one year old kid going to play Azdak, this iconic fifty-year-old drunk judge?” He expresses his appreciation for the shows that challenged him. “This was one of the main productions of the season,” he says, “and it’s Brecht, you know, that’s rare. We’re not fucking doing West Side Story.” Bernthal is a man who enjoys peppering up his language, at least until a young woman comes in holding the hand of a small boy, who appears to be 6 or 7 years old. When the two take a table within earshot of us, Bernthal holds his language in check. He, after all, has children of his own.

After Skidmore, Bernthal went to study at the Moscow Art Theater on the suggestion of Alma Becker. As he puts it, “I was under the umbrella of Alma. I was representing her.” He says that he relished the intensity of the training: “If you’re not good, you’re told you’re not good and you’ve got to leave. In America, I’d only gotten that in sports. If you don’t make the team, you don’t make the team.” During his free time in Russia, he would play semi-pro baseball.

When he returned, Bernthal headed to New York City to do work with his fellow Skidmore alums, who had brought Fovea Floods to the city. He was living out of a Jeep Wrangler, doing a play at the Ontological Hysteric, a theater owned by famed avant-garde director Richard Foreman. Ultimately though, Bernthal struggled to get roles outside of Fovea Floods. “I kept going into auditions in New York and directors would tell me that they needed people with name recognition.” So, naturally, Bernthal decided to go to L.A. “I initially started doing screen acting to serve my theater career,” he explains. “One hundred percent.” 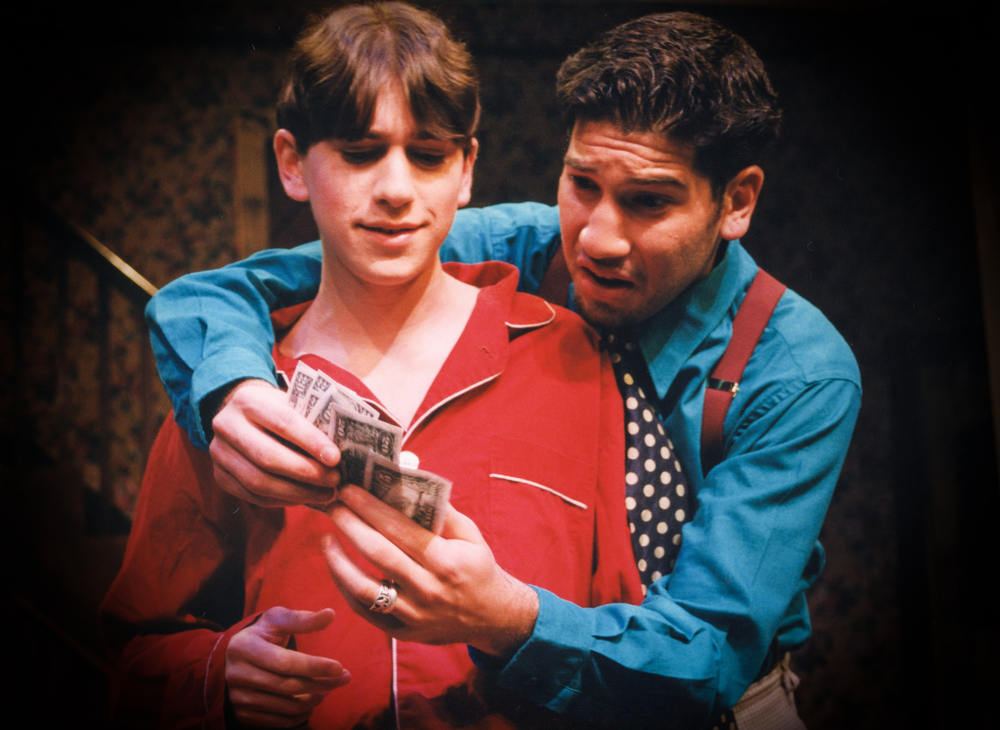 With Michael Zegan ’01 in A Slight Case of Murder. Years later, the two friends would act opposite each other again in The Walking Dead.

In 2013, after The Walking Dead had propelled his career to a new level, Bernthal acted opposite Brad Pitt, Shia LaBeouf , Logan Lerman, and Michael Peña in David Ayer’s World War II action film, Fury. “It was an eight-month process. Unbelievably demanding. There was an authentic tank. We lived on the tank, we pissed and shat on the tank.” This much I’d heard; Ayer’s notoriously uncompromising approach to working with his actors is no secret. Bernthal himself has spoken about it in other interviews. What I hadn’t heard was the next part of the story:  “The only day off I got that whole time, I took a day and a half to fly to Saratoga for Alma’s memorial service.” He continues, “I got back and Brad and I had this really intense scene together. An emotional breakdown scene. Brad let me hang a picture of Alma in the tank that day…She’s an extremely important force in my life,” he speaks in the present, “And she always will be.”

Expanding that sentiment to the entire department, he says: “Every choice that I make—what play I’ll do, what movie I’ll do, what T.V. show I’ll do—I make based on whether I believe in the artists. And that’s something I learned in the department. I’ve never taken a job where if I had to call Alma, I would say ‘I’m doing this one for the money, Alma.’ It’s never happened and it never will.” 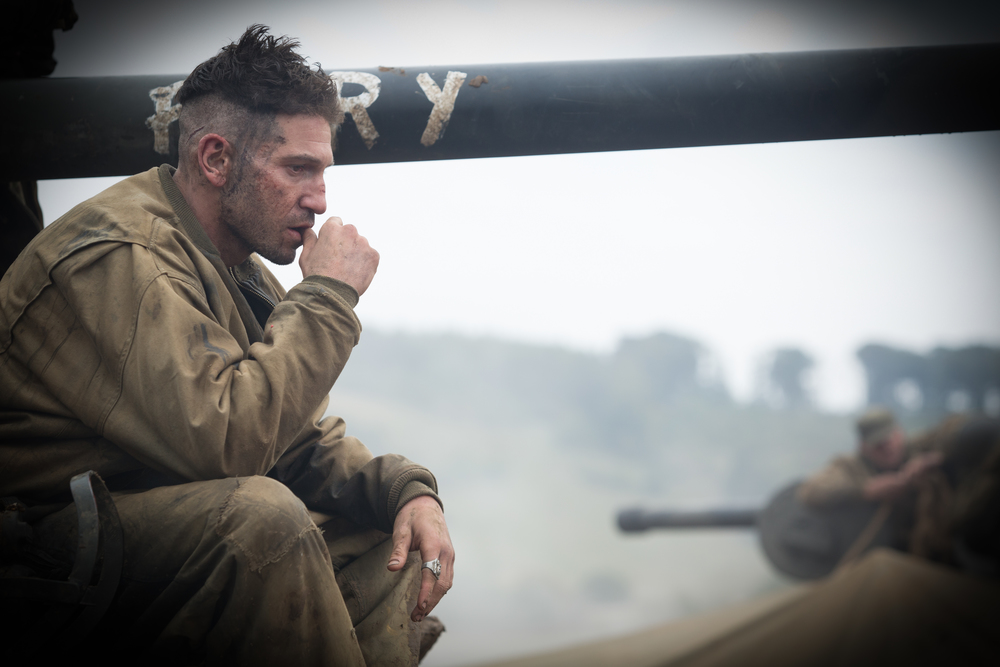 Gabe Cohn is a senior English major and Editor-in-Chief of the Living Newsletter. He has recently contributed to Saratoga Living and Skidmore Unofficial.