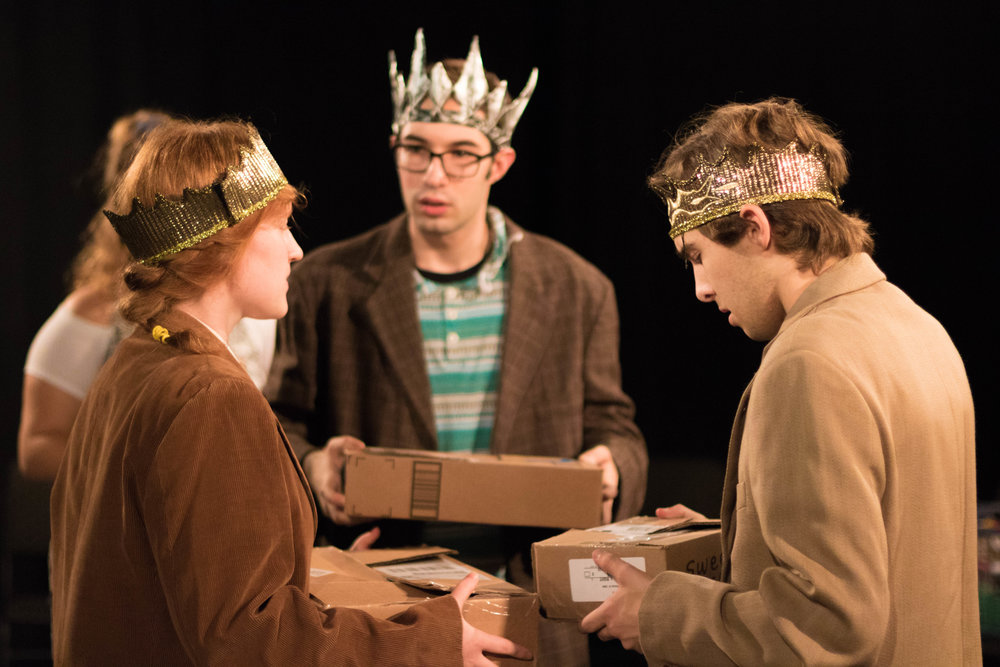 “Samantha, will you marry me?”

Mr. Merrick, played by Philip Merrick ‘19 (in this world, characters are named after the actors who play them), asks this question while slowly picking up a single red rose, plucked from his garden by Samantha’s father. He repeats this question, an allusion to the original French story of Beauty and the Beast, during the shadowy transitions throughout the show. It’s the only reference to a traditional fairy tale in the script, which becomes darker and less familiar as it goes on. Mr. Merrick and Samantha (Samantha Fleishman ‘20) are playing a game. But are they playing the same game? What happens when people are unknowingly playing different games? And what is revealed about us through the games that we choose to play? 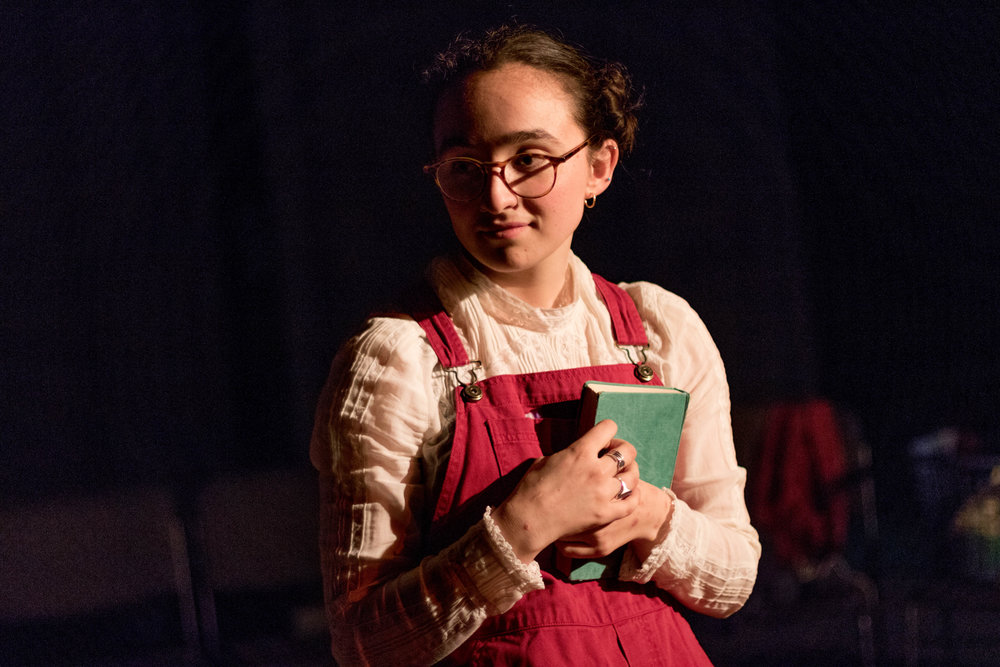 Samantha Fleishman ’20 in The Secret in the Wings. Photo: Dante Haughton ’19

The Secret in the Wings, written by Mary Zimmerman and directed by Rebecca Rovezzi ‘18, addresses these questions, revealing in the process a great deal about the darkness of childhood and the power that lies beneath the superficial sheen of a fairy tale’s “happily ever after.” The show is Zimmerman’s take on six lesser-known fairy tales, all of which reject the traditional themes of love and marriage and instead revolve around violence, unstable or even dangerous homes, and developing sexuality. The ensemble members, who play the ten children acting out these stories, are also unbalanced, teetering on an edge where they are almost—but not quite—going to dive head first into the terrors of adulthood.

The ensemble plays within a space designed to look like an attic, Rovezzi’s interpretation of what Zimmerman’s play indicates as a mysterious, transitive room that can transform through imaginative play. An old rug beckons the audience into the space. A single light bulb hangs down from the ceiling, casting shadows on the walls. Boxes are stacked high throughout the space, and on one stack of such boxes in the center of the room sits an old music box playing an eerie tune. In each tale, members of the ensemble, in colorful, youthful costumes designed by Arelis Cruz ‘17, arrange these boxes to become makeshift sets, reinforcing this notion of a world created by childlike play. The lighting design, by Lea Tanenbaum ‘19, delineates these shifts in location, from a claustrophobic attic to a sprawling castle or a kingdom under siege, in such an otherworldly and dream-like way that the audience members become just as caught up in these stories as the children telling them. 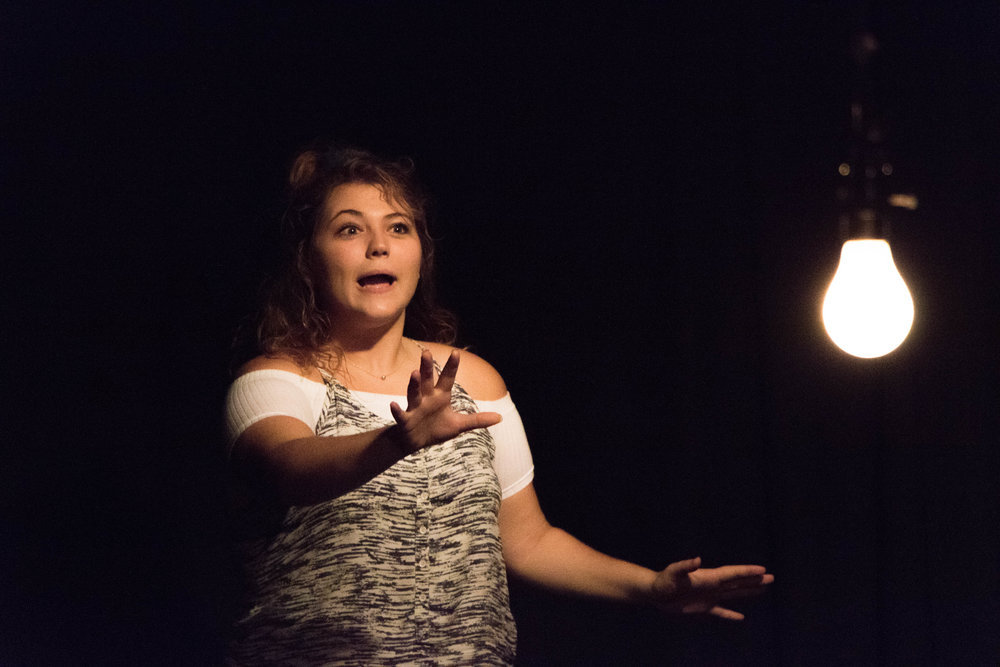 Emily Cross ’19 in The Secret in the Wings. Photo: Dante Haughton ’19

There is a strong choral aspect to the children’s play. The cast sings “You Are My Sunshine” in a round, their voices growing increasingly disturbing and discordant as the song goes on. In the tale of the Seven Swans, the cast speaks their lines in a round again, their overlapping voices indicating the passage of time. They tell jokes and let out loud laughs as they scurry and skid from one scene to another.

Rovezzi’s staging often creates a powerful juxtaposition between the children’s apparent innocence and the dark material of the stories they tell. In one scene, Carrie Baker ‘20 plays hopscotch as the young princess Allerleira, while the ensemble narrates, in singsong voices, how she was forced to marry her father after the death of her mother; later, three easily-distracted young girls, played by Fleishman, Sarah Marlin ‘20, and Audrey Erickson ‘20, sit cross legged on the floor to tell the end of this story as other actors play out the action in shadows displayed behind a nearby curtain. 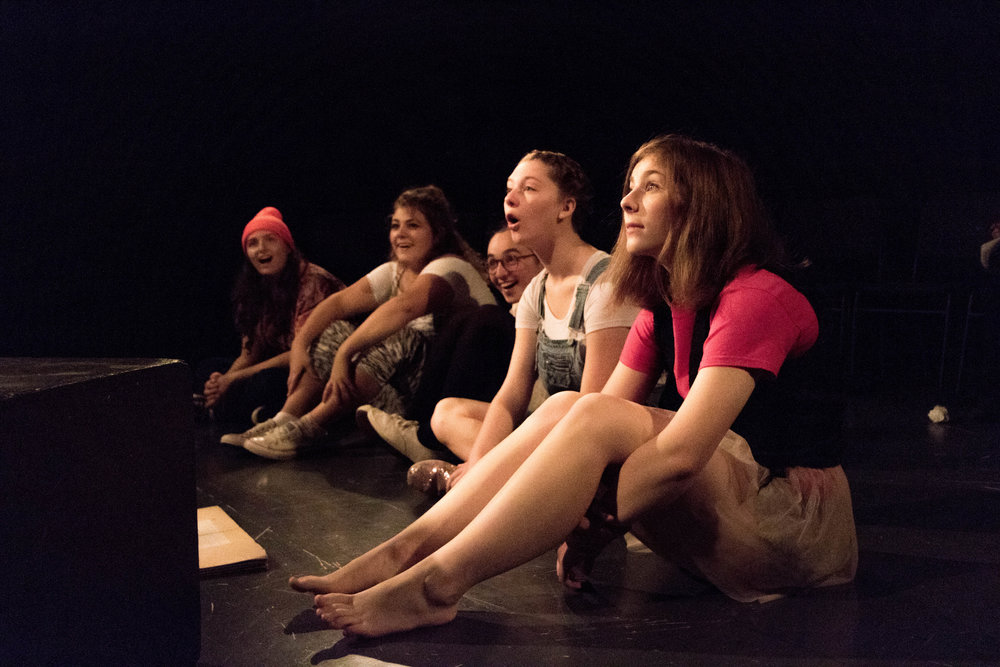 From the first moments of the play to its satisfying end, in which each member of the ensemble takes the role of either parent or child, and the parents tuck their children into bed to conclude their children’s stories, it is clear that the piece’s power is a result of Rovezzi’s unique directing style. The actors’ strength as an ensemble and the playful nature of the piece are the results of a process that, like childhood play itself, emphasized collaboration. Rovezzi and her ensemble worked together to create their own set of worlds and images that they could inhabit wholly and truthfully, thus transforming the studio into a strange world that holds the very magic of childhood in its midst.

Caity Cook ’18 is Editor-in-Chief of the Skidmore Theater Living Newsletter.