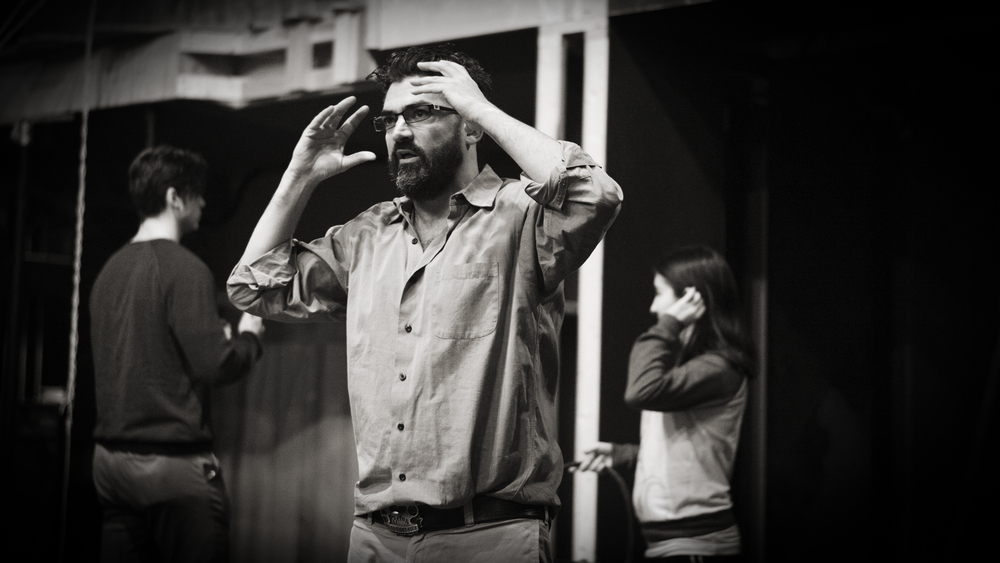 Late afternoon in the JKB: Actors are running lines, electrics crew members are calling to each other from the catwalks in the Mainstage, and “wet paint” signs adorn doors everywhere. When I finally spot Ian Belton, he’s emerging from a huddle with his stage management team. Sporting a black t-shirt and jeans, ruffled hair, and an oversized can of “Kickstart” energy drink, Belton is a manifestation of the pre-tech week adrenaline that’s coursing through the theater. We sit on leather couches in the lobby and discuss his journey from Skidmore student (he graduated in 1994) to guest director.

Belton has spent the past few months directing Marina Carr’s Hecuba, which opens in the JKB this week. “It’s an exciting thing,” he says, perching himself on the edge of his couch. “I have no idea if it’s going to work or not. It’s pretty wild.” Belton has a wired quality to him. He speaks in run-on sentences; his mind at times works too fast for his mouth to keep up. Belton’s eyes are focused and intense, and maybe more than a little sleep deprived. His every movement seems packed with the fervor that he brings to his work.

Belton and Phil Ristaino in performance on the streets of Prague, 1994.

Surprisingly, a career in the theater was never Belton’s intention. In fact, he entered Skidmore intending to become a philosophy major. But the theater pulled him in. “I ended up spending eighteen hours a day in here,” he says, gesturing broadly to the interior of the JKB. “I had to change my major so that I could graduate.”

“It was an interesting time,” he says of his years in the department. Running his hands slowly along his scruffy beard, he recalls a radical shift in theatrical philosophy. Anne Bogart, acclaimed director and founder of SITI Company, had just completed a semester residency at Skidmore. The faculty, particularly former artist-in-residence Phil Soltanoff, was energetic and inspired. “When I got here [Soltanoff] was teaching Meisner technique and naturalism,” Belton pauses to sip his drink. “But by the time I graduated, he was into more abstract, movement-based work.”

For Belton, this is not simply Skidmore history, but a crucial factor in his development as a theater artist. Though he had always pictured himself as an actor, Soltanoff and Bogart both encouraged Belton to pursue directing. He heeded their advice. “You kind of have to go where people tell you to go,” he explains. “I love the theater. The best way that I could serve it was through directing.”

So he became a director. Upon graduating from Skidmore, Belton embarked on a nomadic journey, one that has not yet ended. He moved to Prague with a group of fellow Skidmore graduates, with whom he formed a theater company. The company staged a performance on the city streets that lasted fourteen days. After Prague, he returned to the States and received a directing fellowship at Juilliard. A brief period of freelance work followed his Julliard graduation, but he swiftly headed out to the Philippines to attend and then teach at the International Academy of Television and Film in Cebu. He received an NEA grant and spent time living in Israel. Next, he pursued a Masters of Philosophy in Theater and Performance from Trinity College in Dublin, Ireland, where he first met Marina Carr. Immediately before beginning his time at Skidmore, he had a stint as a professor at the University of Hawaii. This list of people and places is so long that even Belton himself forgets about that last gig, only to remember it midway through our conversation. 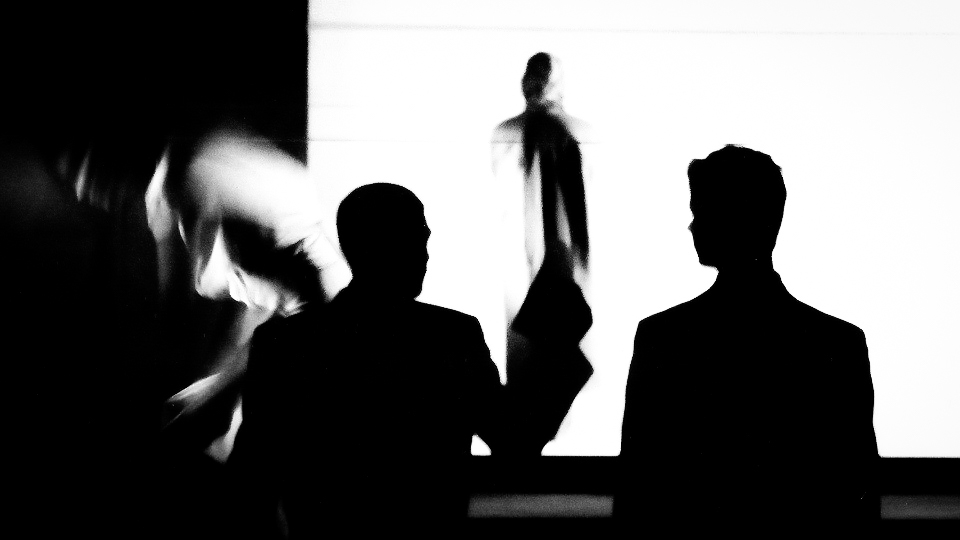 Belton and Johnny Rosenthal in Frontier and the Kings of Prussia. Prague, 1994.

Belton’s extensive travel seems to inform his take on Hecuba. As he talks to me about his vision for the show, he emphasizes its global relevance. Carr’s new version of Hecuba flips the accepted story of the conquering of Troy by looking at it through a Trojan lens, rather than a Greek one. In this perspective, the Greeks become murderers and rapists rather than heroes. Belton’s eccentric personality seems to feed into an affection for outcasts and underdogs. “They kill all the men, kill all the old women, and sell the younger women into slavery,” Belton tells me. “That for me has a lot of parallels to what’s happening in the Middle East—to sex trafficking, to sex tourism. Sex trafficking among minors is rampant in Baghdad right now.” Belton then takes Carr’s script and focuses in on the impact of gender roles on the action of the play. “My take on the script is to detonate the gender,” he says, “I wanted it to speak for [the cast], for it to say what they wanted to say about gender and sexuality and power.” 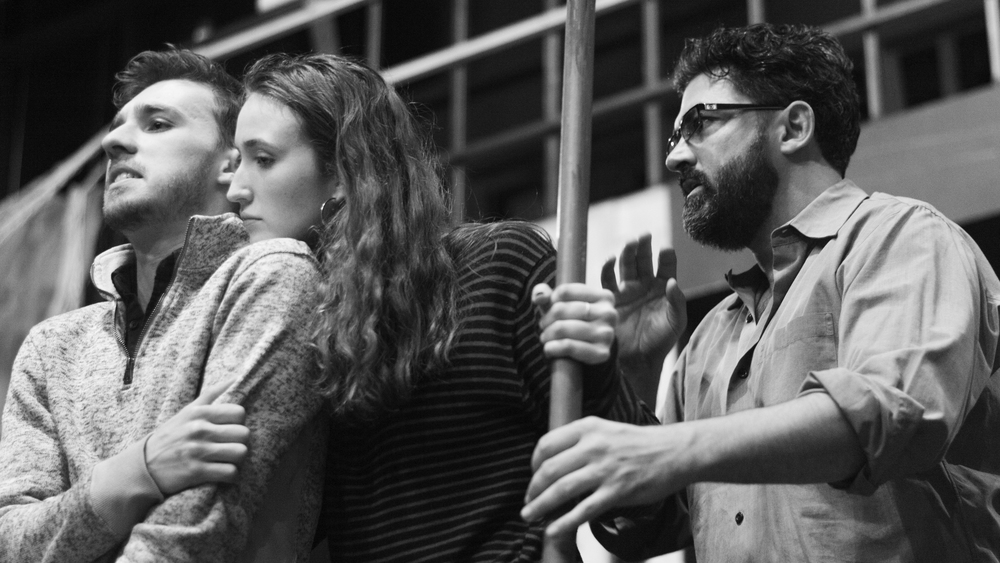 Belton continually insists that his unconventional, risk-taking directing style is complemented perfectly by the atmosphere of the Skidmore Theater Department. He cites Theater Company, the weekly meeting for students and faculty to discuss the goings-on of the department, as the reason for this, noting that it’s a system that he has unsuccessfully attempted to recreate in other venues. “I realize how special Theater Company is and how strong the community is here. You know, I’m going through the building and talking to various people, from props to PR, and everyone approaches it with a lot of passion. Everyone is excited for everyone else’s work. It’s really supportive. That’s why I think I can work in the way that I am.” He laughs again, “I don’t think I could get away with that anywhere else. I’ve been all over the planet and this is a really special place to live and learn.”

As he finishes this sentence, his stage manager walks by, reminding Ian of the time. He laughs, jumps up, and shakes my hand. As he walks away, he calls back to me, “I gotta get to work.” Back where he belongs.

Caity Cook is a sophomore English major and theater minor. She is a staff writer for the Living Newsletter. 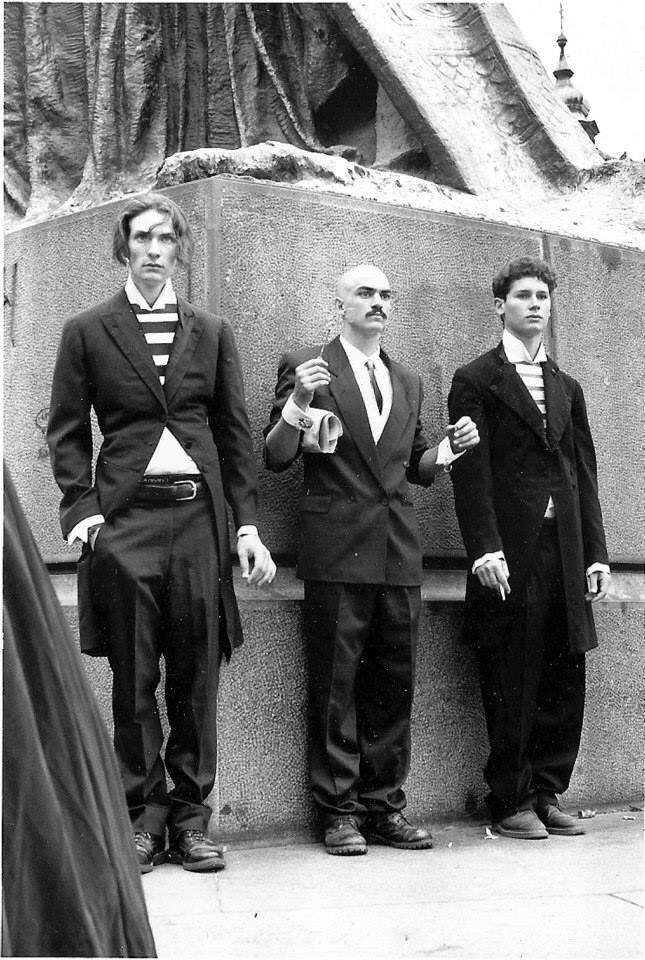 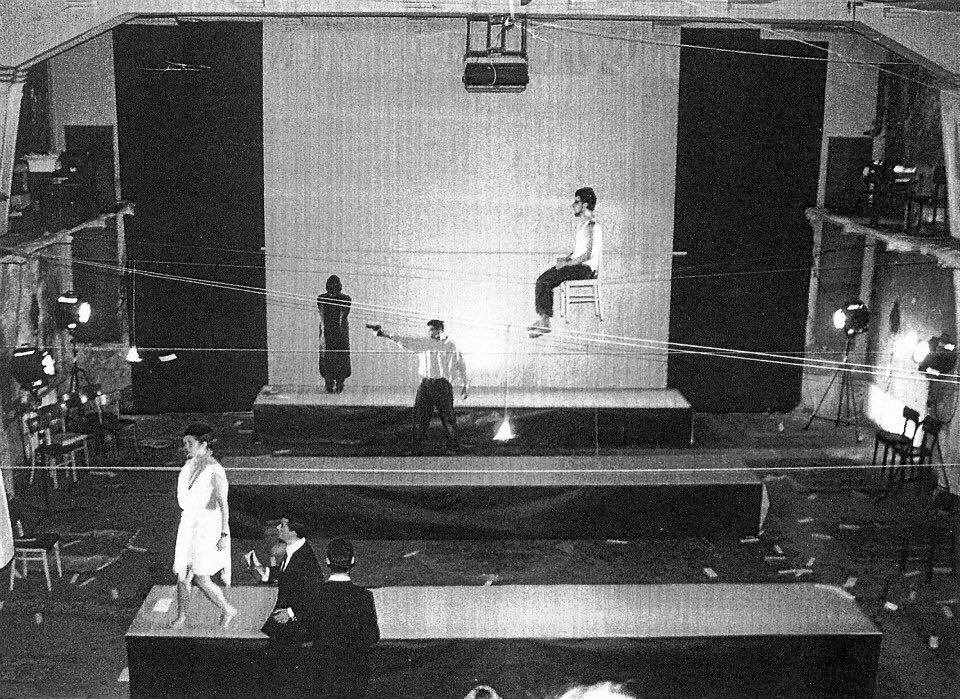 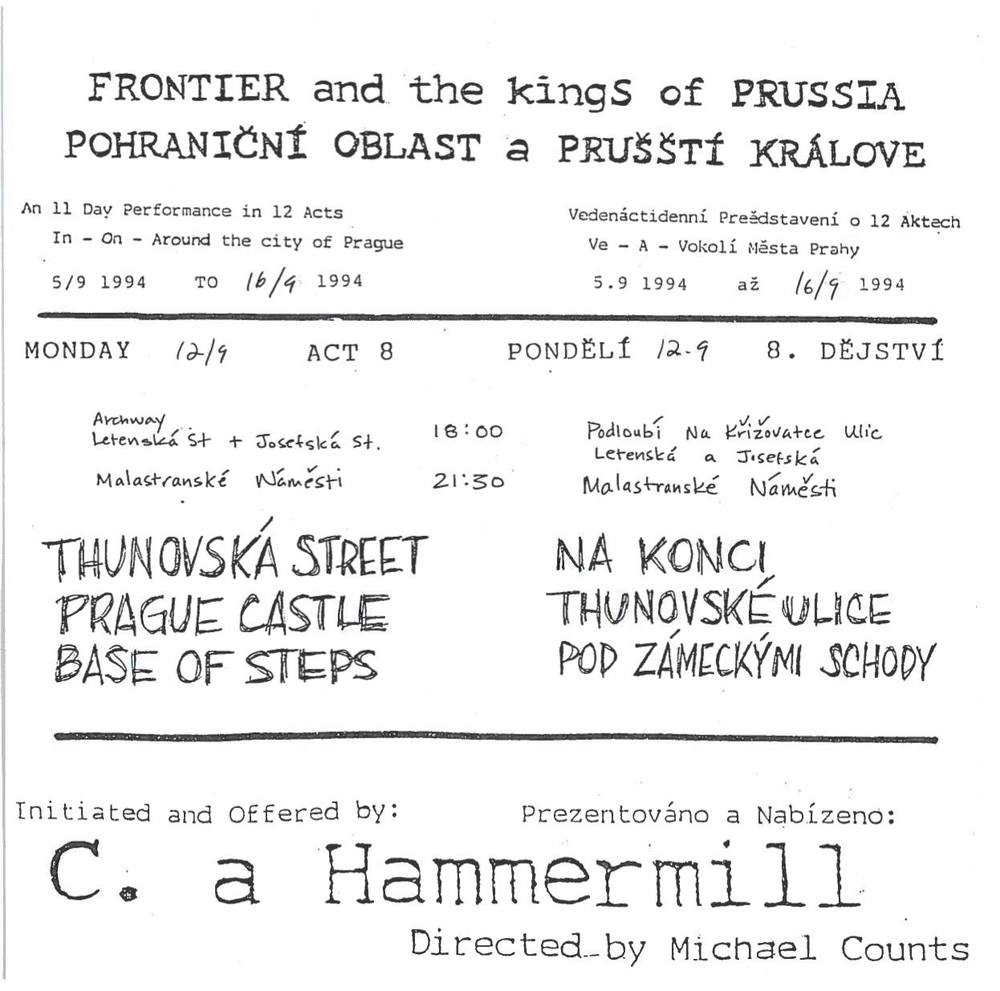 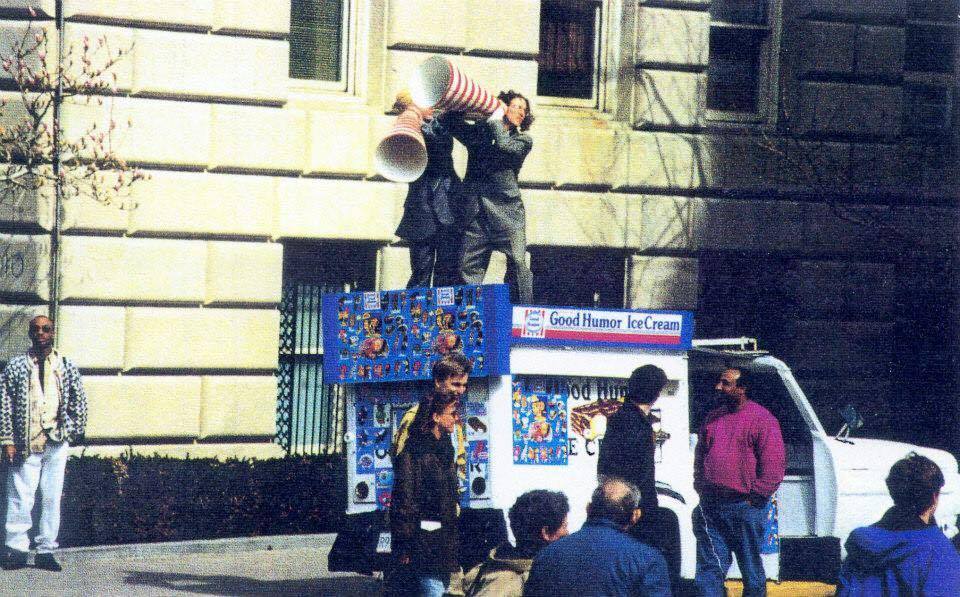 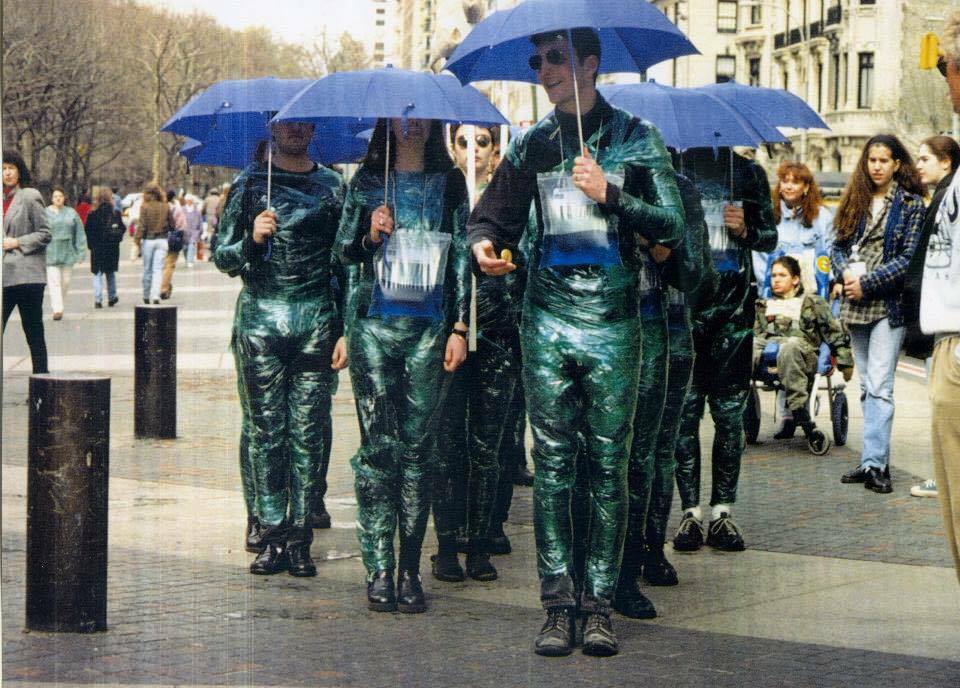 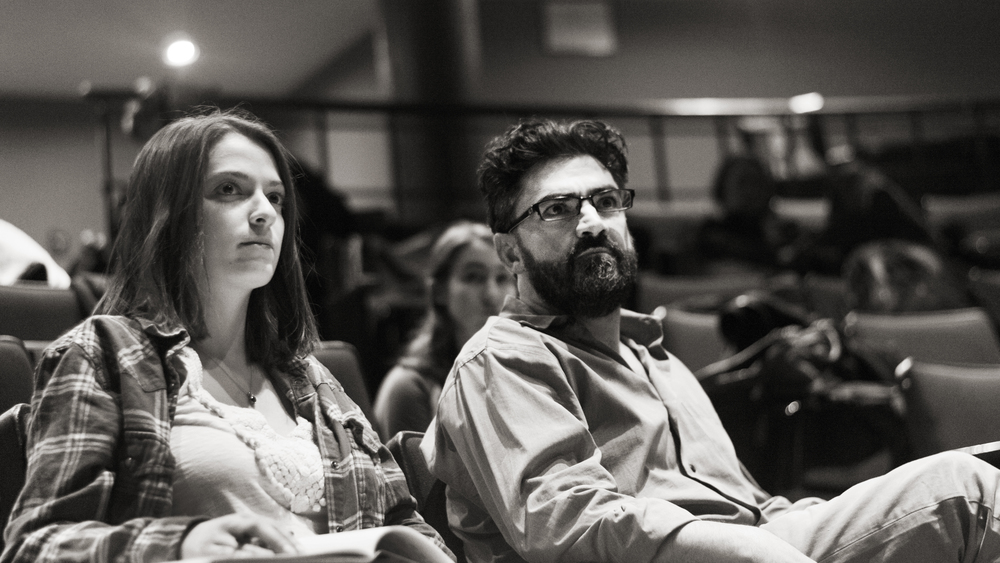