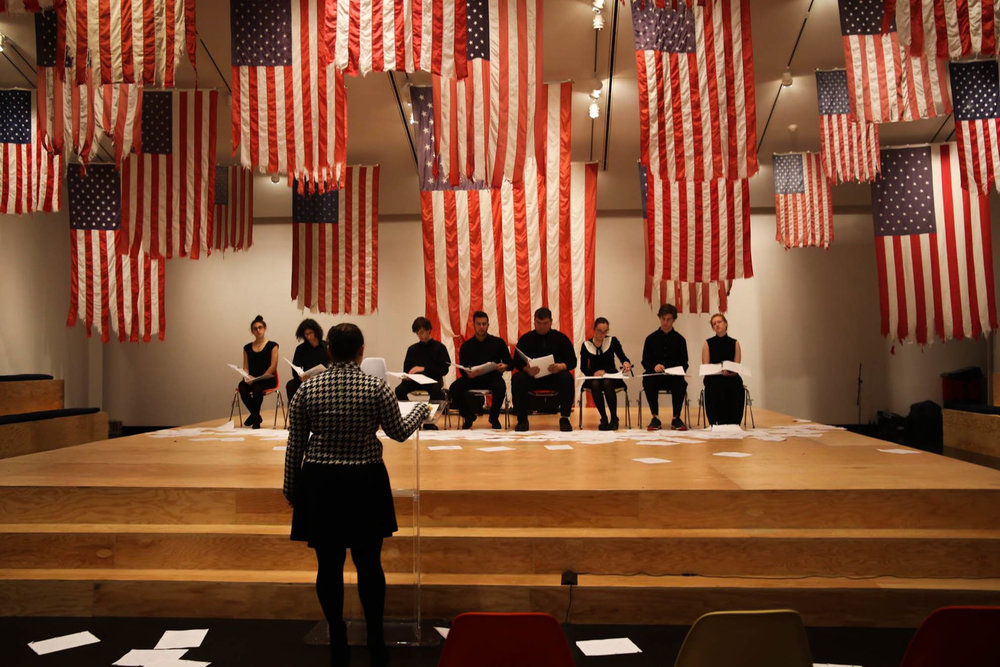 “Equal Dignity in the Eyes of Law”: Demystifying the Supreme Court in A More Perfect Union

In the last several days, weeks, and months, we have all been challenged to consider what kind of union we are. What sort of country do we aspire to be? What are our values? And, perhaps most importantly, how can we best find some semblance of unity, even when we are such a fundamentally diverse nation?

Director Michael San Roman ’17‘s New Works Lab A More Perfect Union could not be a timelier response to these questions. In it, eight actors portray the Supreme Court justices who wrote the landmark ruling Obergefell v. Hodges, which made same-sex marriage a nationwide constitutional right.

The actors sit onstage in a neat, intimidating line for nearly the entirety of the show, with just one seat left unfilled to represent Justice Clarence Thomas, who remained silent for the duration of the oral arguments for the case. One actor, Sierra Fritz ’17, stands apart from the rest. She portrays the civil right lawyer Mary Bonauto, who vehemently defends the universal right to marry from behind a transparent podium. The audience’s perspective on her status can shift dramatically from moment to moment, as San Roman invites the audience to move wherever they see fit throughout the show. In one location, the Justices loom above the audience, seemingly menacing and unsympathetic; in another, they are visible only in profile, and Bonauto is the focal point. 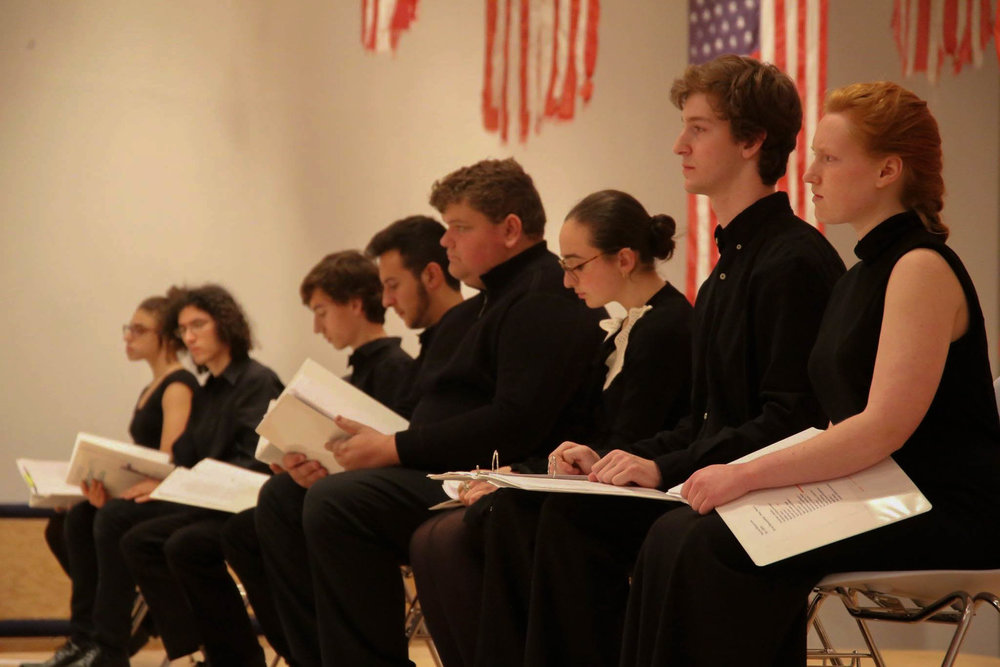 Part of San Roman’s goal with the devised piece was to give audiences a glimpse into the inner-workings of the Court, a world of which many of us have only a minimal understanding at best. When listening to the oral arguments for Obergefell v. Hodges, we are stunned by how something so emotionally charged and deeply personal as the right to marry can be rationalized and deconstructed in such a dry, analytical manner. This goal clearly made an impact on his actors as well, including Nick Ranieri ’20, who saw his role in this performance as an “opportunity” to educate himself about the court. Moreover, Fritz hopes that audience members “do some more research” about the court after seeing the show, just as she and the rest of the cast did in order to prepare themselves. Over the course of the show, Fritz found herself “more inspired to learn about the government,” and she believes that A More Perfect Union will lead others down the same path.

San Roman recognizes that regardless of the extent of knowledge a person has about the Supreme Court, it’s rare that one actually “hears them speak.” It was important to him that the audience got to listen to the Justices talk in their own words, to see them as normal people. He achieves this by having the actors speak in tandem with a recording of the oral arguments so that we simultaneously hear both the original words and an actor’s interpretation of the words.

As the performance goes on, the stage becomes figuratively and literally surrounded by the words of the oral argument, as the actors drop the pages of their scripts onto the floor one-by-one. At the play’s end, all nine actors stand, holding hands, with pages upon pages of their words covering the stage. It’s a moment which ironically signifies both the power and the inadequacy of language. On the one hand, the words are remarkably strong and effective—they are the reason same-sex marriage is now legal in all fifty states. But on the other hand, words cannot fully capture what it is to love someone. It’s striking to watch the judges argue and depersonalize the case, when for many, Obergefell v. Hodges was an inescapable emotional storm—an intimate debate about human rights which could not be disentangled from personal feelings. 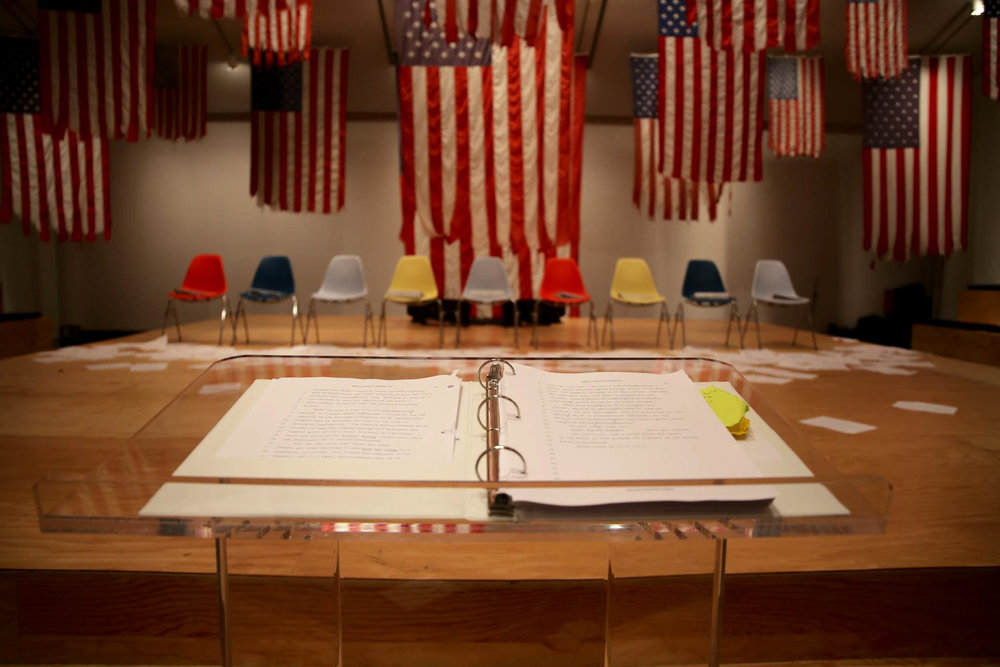 The 2016 presidential election has officially wrapped up, and we’re all wondering, “Where do we go from here?” When asked this question, the creative team behind the piece were in universal agreement that we must see the hope that underlies the entirety of A More Perfect Union. “I think it’s more important than ever,” San Roman stated. He hopes that watching the show reminds the audience that, ultimately, “love wins.”

At this point in time, our country has not yet learned what it means to be a perfect union. But on June 26th, 2015, the Supreme Court deemed same-sex marriage a constitutional right, and we got a little bit closer to that intangible, ineffable goal of perfection—even if we’ve had some major setbacks along the way. All hope is not lost, and behind the guarded doors of the Supreme Court are words about love and humanity that belong to us just as much as they belong to Kagan, Alito, Roberts, Kennedy, Sotomayor, Breyer, Ginsburg, Thomas, and Scalia. We just need to be willing to listen.

Kallan Dana ’19 is a staff writer for the Skidmore Theater Living Newsletter.