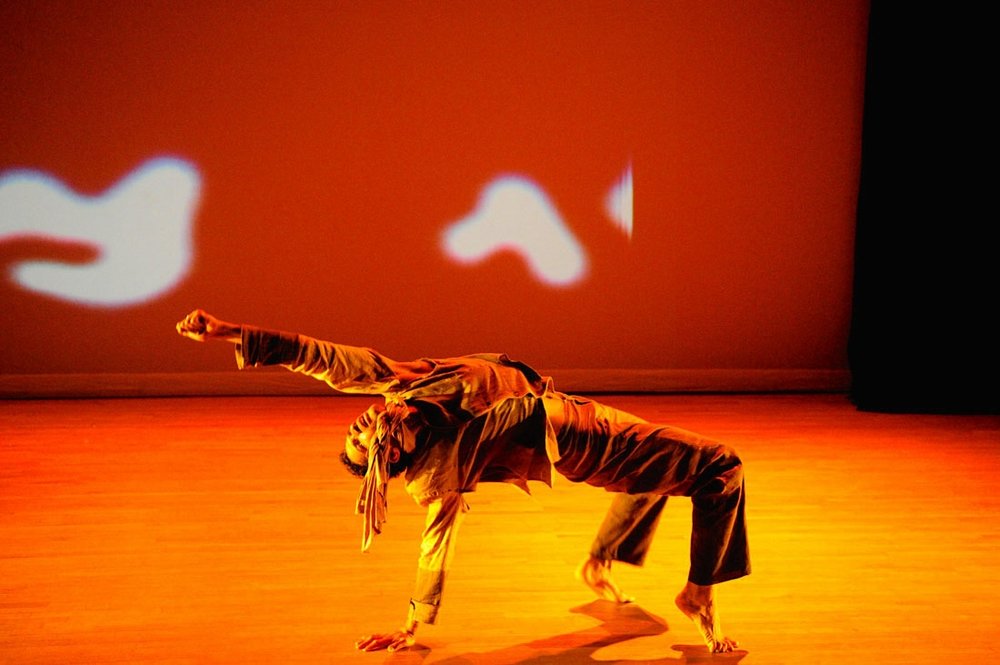 It can be difficult to establish an identity, both for others and for oneself.  It can be especially difficult when one comes from many diverse backgrounds— such as African American, Native American and Jewish cultures—that are not thought to “traditionally” go together.  The question of identity concerns not only our current being, but also our collective past, which includes a past that goes beyond our own.

In his performance HaMapah, Adam McKinney chose to fully embrace each part of himself, creating a piece of art synonymous in form to his divergent lineage.  McKinney, along with Daniel Banks, is a co-founder of DNAWorks, “an arts and service organization committed to dialogue and healing through the arts.”  This year marks DNAWorks’ 10th anniversary since being founded in 2006, after both men saw a lack of representation of identity within the performing arts.

In HaMapah, McKinney incorporates dance, video, music, pre-recorded audio, and live-storytelling into his performance in order to narrate his different pasts and explain how they come together.  As the Hebrew title states, he claims that he is the “map” of his family, but he is also the “quilt” and the “tablecloth.”  As the map, McKinney navigates his audience through his family’s collective history.  As the quilt, McKinney shows them how his family members have all been stitched together.  And as the tablecloth, McKinney is brutally honest with the audience and himself by allowing his history to be projected on top of his skin, revealing his past completely.

No past comes with a straight, easy, beautiful, and entirely uplifting story to tell – the past comes with memories no one wants to remember and with stories no one wants to hear.  Underneath even the happiest of family meals, the tablecloth is adorned with stains even after having been washed countless times before.  McKinney tells his story with complete vulnerability and is afterwards met with no judgment, only applause and amazement from his audience.

McKinney tells us who he is, while also asking us who we are. But it’s not a question to answer immediately— it’s a question to think about. It is a call to consider aspects of both experience and biology, and how exactly the two have chosen to intermingle.

Nina Slowinski ’19 is a staff writer for the Skidmore Theater Living Newsletter.