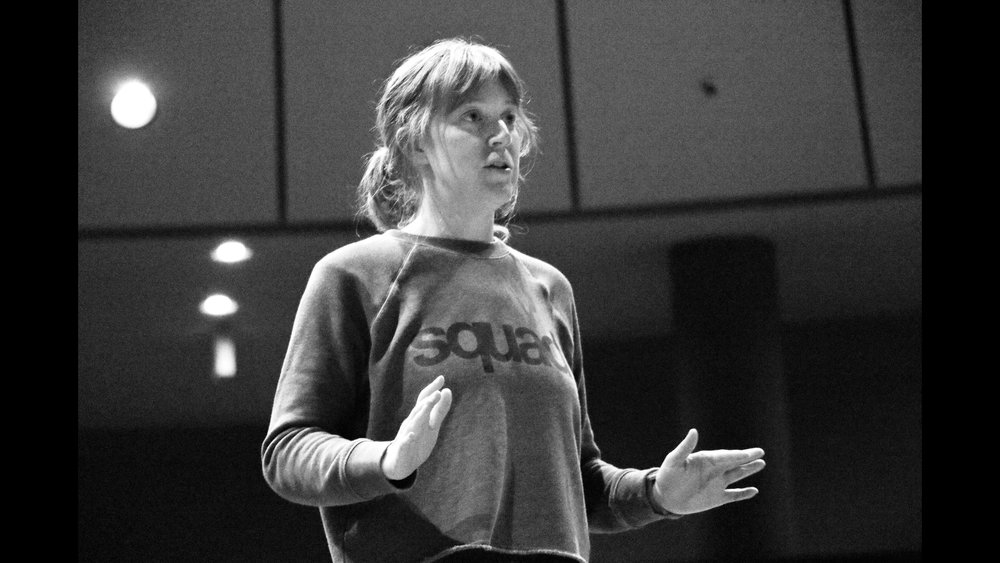 Rebecca Marzalek-Kelly in rehearsal for Who Will Carry the Word. Photo: Dante Haughton ’19

When I meet with Rebecca Marzalek-Kelly, she is emerging from a production meeting with a mischievous smile on her face. “We were working on some magic,” she says coyly.

Marzalek-Kelly, who graduated from Skidmore in ‘02, has returned to the JKB this fall to direct the mainstage production Who Will Carry the Word, written by French-resistance fighter Charlotte Delbo and based on the true story of twenty-three French women living in the barracks at Auschwitz. As we chat, Marzalek-Kelly, with her red hair and kind face, is soft-spoken and humble in a way that almost—but not quite—disguises the fact that she is…well, a total badass.

Marzalek-Kelly began directing during her senior year at Skidmore, inspired by the training she received from Anne Bogart and the SITI Company. When she opened her first production, The Turn of the Screw, in Studio A of the JKB. Marzalek-Kelly experienced something very new: “I was so nervous…. I was more nervous than I had ever been as an actor, because I was thinking that it’s not me onstage, now it’s my mind onstage.” She took this fear as a challenge. 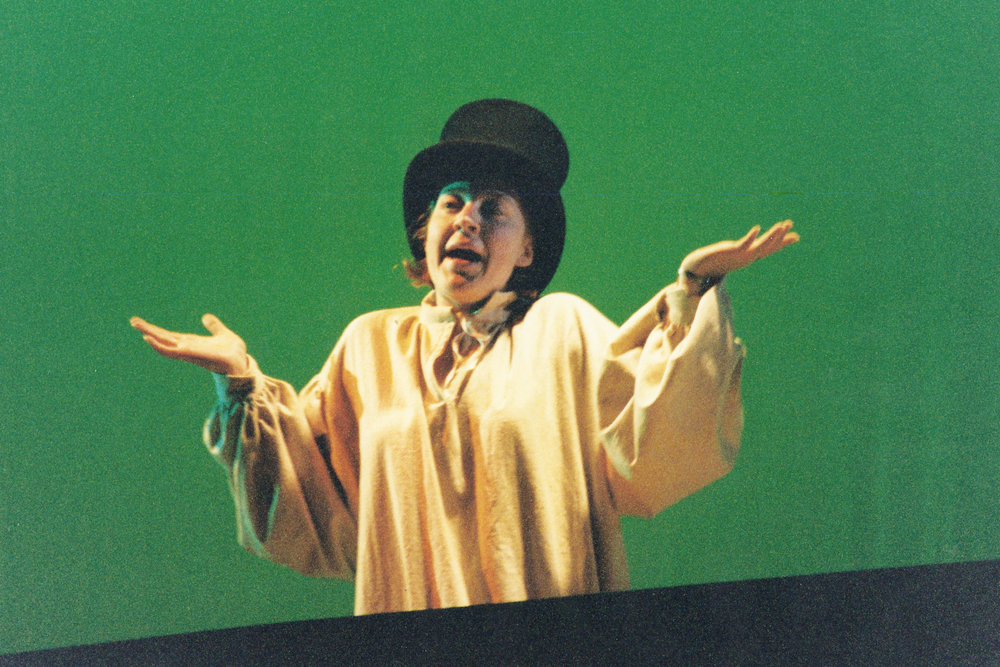 Marzalek-Kelly performs in the Skidmore Theater production of Book of Tink (1999).

After graduating from Skidmore, Marzalek-Kelly followed fellow Skidmore alums Sue Kessler ‘99 and Josh Chambers ‘98 to NYC, where she assistant directed a production of Bertolt Brecht’s The Resistible Rise of Arturo Ui for Skidmore student–created company Fovea Floods. She describes this first summer in the city as a whirlwind of theatrical discovery and personal growth. “It was so fun to be in your early twenties in the city, to have a theater company and think that you were making work that nobody else was making,” she says with a laugh. “I wouldn’t trade it for anything.”

After that “wild and crazy summer” with Fovea Floods, Marzalek-Kelly began to settle down in the city, starting a job at the Theatre Communications Group (“I was basically sorting the mail,” she says. She’s now Associate Director of Membership.) and continuing to work as a director and performer. She got involved with Labyrinth Theater Company as the organization was rapidly growing under the leadership of Philip Seymour Hoffman and John Ortiz.

One experience at Labyrinth seems to have made a particular impact on Marzalek-Kelly. While directing a Barn Series reading of new play Mail Order Bride by Charles Mee, Marzalek-Kelly inadvertently cast the playwright’s young daughter as the mail order bride in question, much to the horror of some of the Labyrinth crew. Luckily, she says, Mee had a great sense of humor and was tremendously supportive of Marzalek-Kelly’s work with the script.  “Every time I’m confused in rehearsal now,” Marzalek-Kelly explains, “I relive that conversation with Chuck…He’s like the voice over my shoulder to remind me that it’s okay. You can make weird choices sometimes, and it’s okay. Keep going. Keep going down that path.”

And Marzalek-Kelly has taken those words to heart. She brings elements of playfulness and experimentation to her work that would make Charles Mee proud. “It’s hard for me to think of directing without there being movement,” Marzalek-Kelly says. When I first started directing I used to think, it’s just bodies in space. They have to be doing some very interesting stuff for me to want to watch them.” She began incorporating movement into all of her pieces, initially resisting the label of “choreography” because, in her mind, “That’s just what the show needed.” But others soon took notice of her excellent movement work, and Marzalek-Kelly began to be hired as a choreographer.

And then there’s that sense of magic that Marzalek-Kelly mentioned at the beginning of our conversation. She loves to surprise the audience, pull tricks on them that they cannot predict or rationalize even though they occur right in front of their faces. And this sense of playful misdirection applies to her actors, too. Marzalek-Kelly explains that she often likes to hide these magical moments from her actors until the last possible moment. “I feel like you can’t give people certain notes until they’re ready to hear them,” she says. This secrecy is always carried out with the best of intentions: through withholding information until a certain point in the process, she explains, she can generate excitement and revelation at moments when discovery no longer seems possible. It’s a means of taking care of her actors, something Marzalek-Kelly’s actor background makes her particularly careful about. 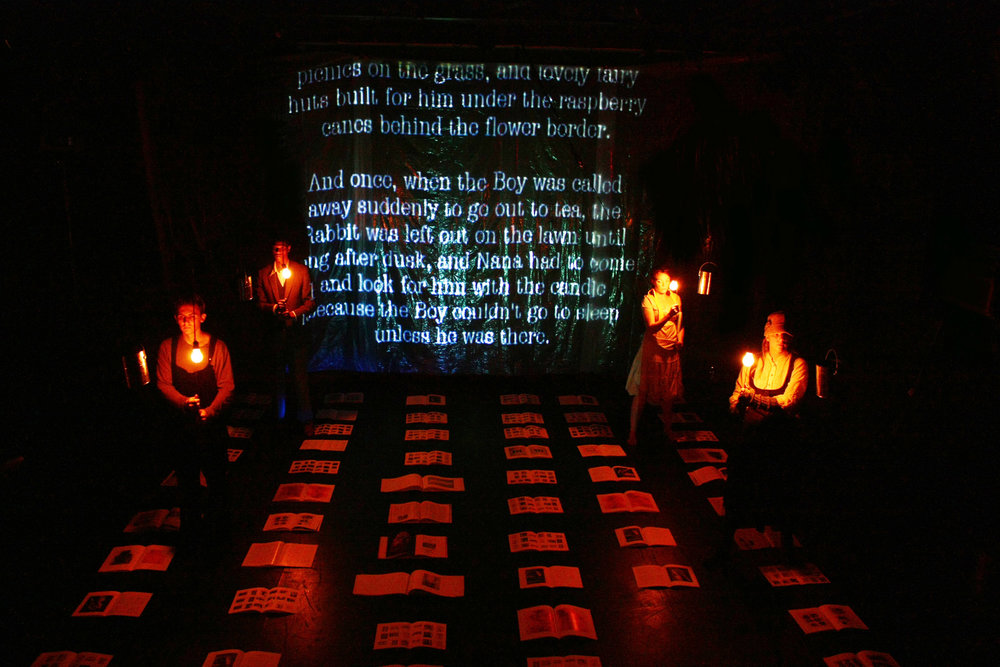 Production photo from original production Fasten, dircted by Marzalek-Kelly at The Bushwick Starr in Brooklyn (2006). Photo courtesy of Sue Kessler.

In Who Will Carry the Word, Marzalek-Kelly brings this signature whimsical style onto the JKB stage. The piece utilizes movement and gesture as a way to tell the story, but as we talk, Marzalek-Kelly is careful to mention the particular challenges that a piece based in history like this poses for a director. How can a director incorporate these artistic touches without disrespecting the subject matter of the piece? Marzalek-Kelly cites the author’s note as a source of inspiration and relief from this problem. She explains how Delbo’s own background in the theater and interest in representing truth through the abstract contributed to her expectations from future productions of this play. “She is giving you license do what you need to do theatrically to this show,” Marzalek-Kelly reminds herself.

But the challenges of directing a play based in such harsh truth extend beyond a battle with the expectations of the playwright. “Every single audience member is going to enter the room thinking they know what the show is about,” she says. And that’s not what Marzalek-Kelly, with all of her magic and surprises, wants to happen. “I feel like from the prologue, they’re going to think, ‘Maybe this isn’t the show that we thought we were going to be watching.’ I hope that allows them to see the show in a different light, and challenges their thinking.” She explains that you can’t watch a play about horrors like this without thinking about the various modern-day monsters and disasters that we hear about every minute of the 24-hour news cycle. “People can be scary. It’s scary. It’s scary to think that with a little variation, history can repeat itself.” 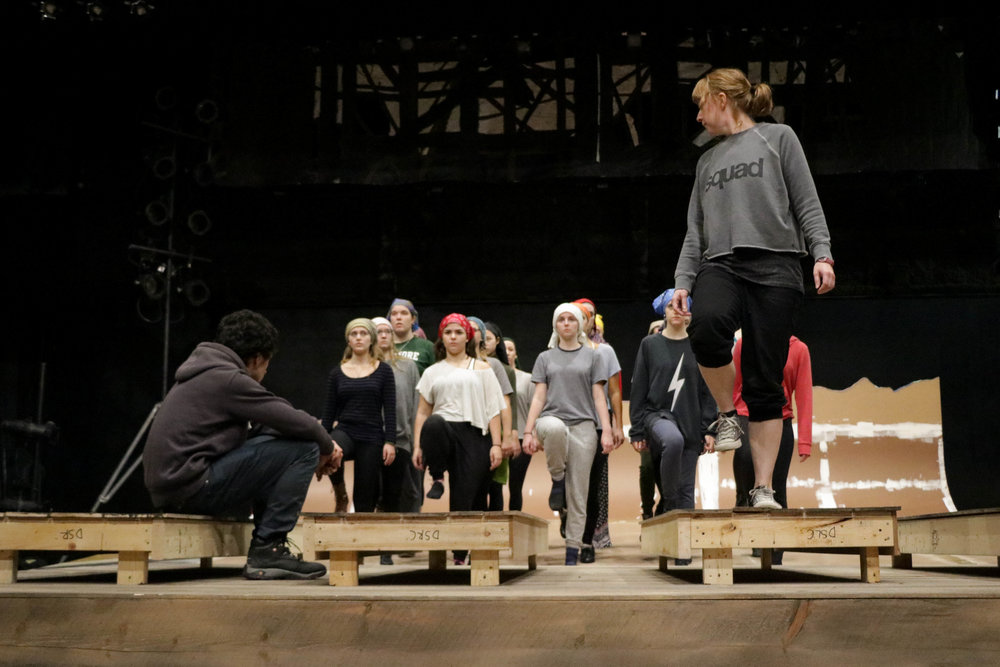 Marzalek-Kelly in rehearsal for Who Will Carry the Word. Photo: Dante Haughton ’19

But Marzalek-Kelly does not want this to production to be solely a tragedy; above all, she wants to focus on hope. Underneath the intensely difficult subject matter in Who Will Carry the Word is a “quality of beauty” that is intrinsically tied to the beauty of Delbo’s language, the tremendous strength and courage that the women display, and the presence of hope through it all. When the women are faced with evil, she says, “They still reach deep down into their hearts and what they can give to each other is kindness.” The relationships between the women in and of themselves are the magic that Marzalek-Kelly searches for. And within those relationships is the light continuing, the word being carried, the hope for the future. Despite the cruel inhumanity that the world continues to face,  “I think there should always be hope.”

Caity Cook ’18 is Editor-in-Chief of the Skidmore Theater Living Newsletter. 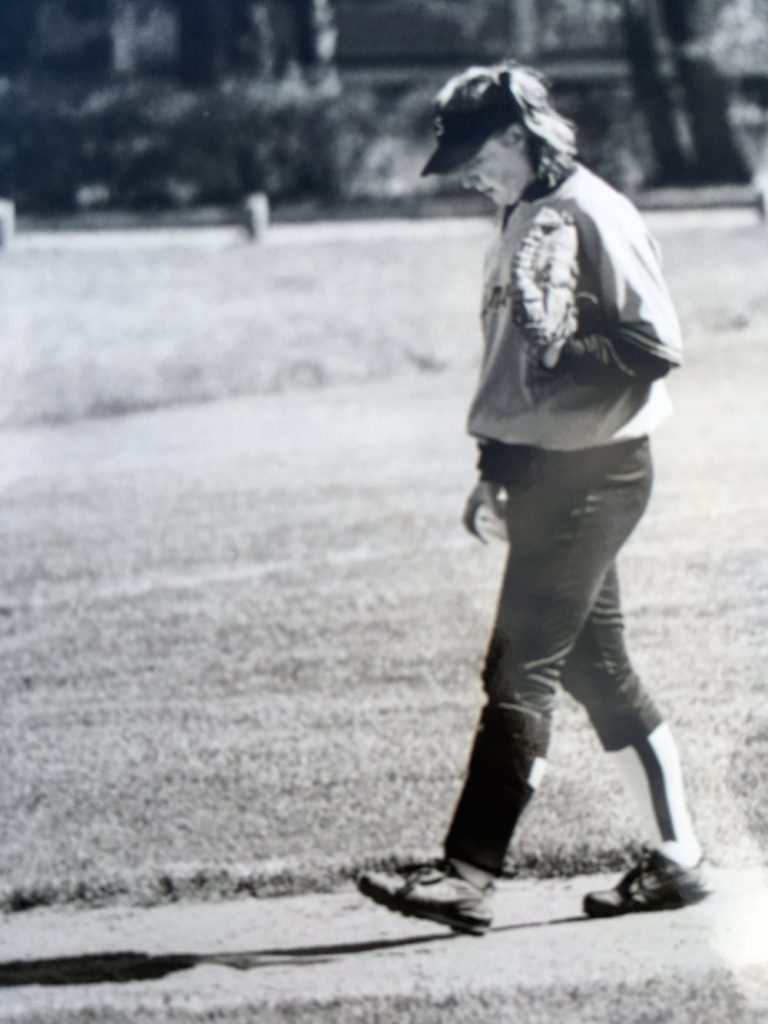 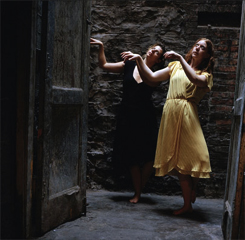 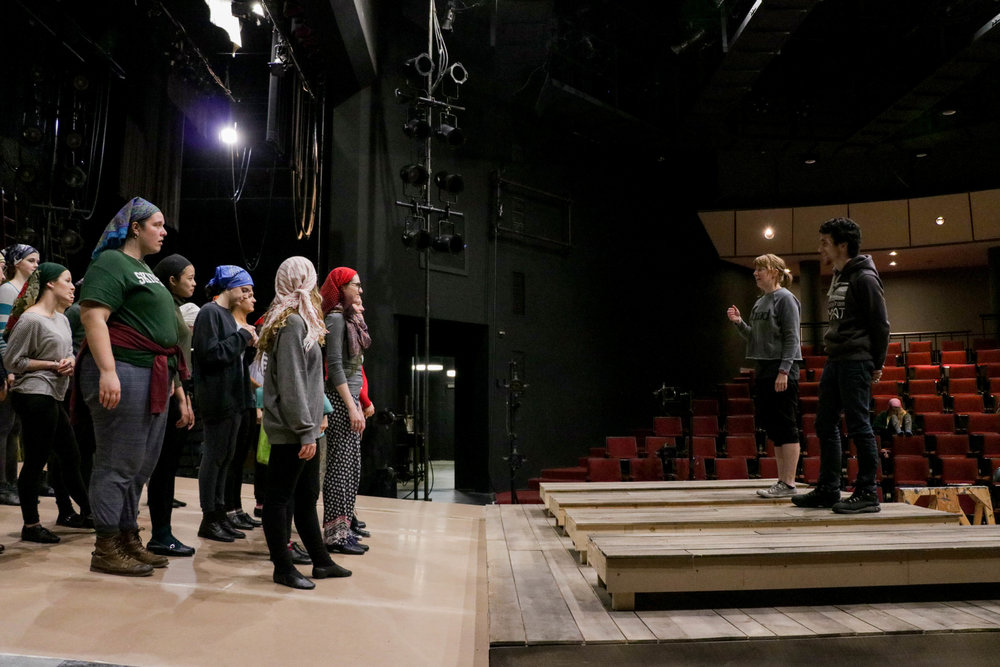 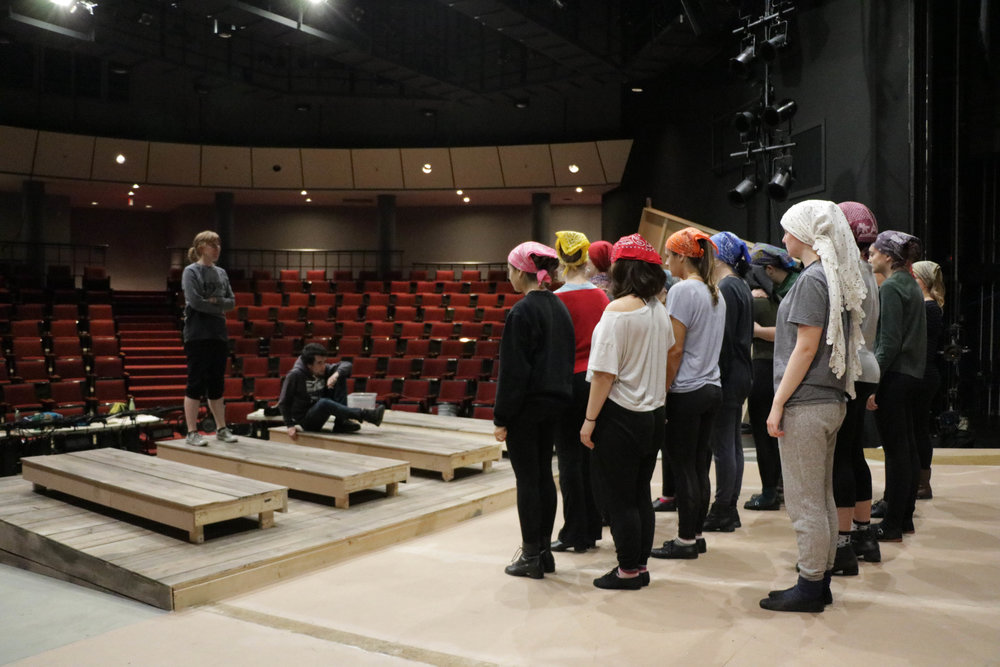 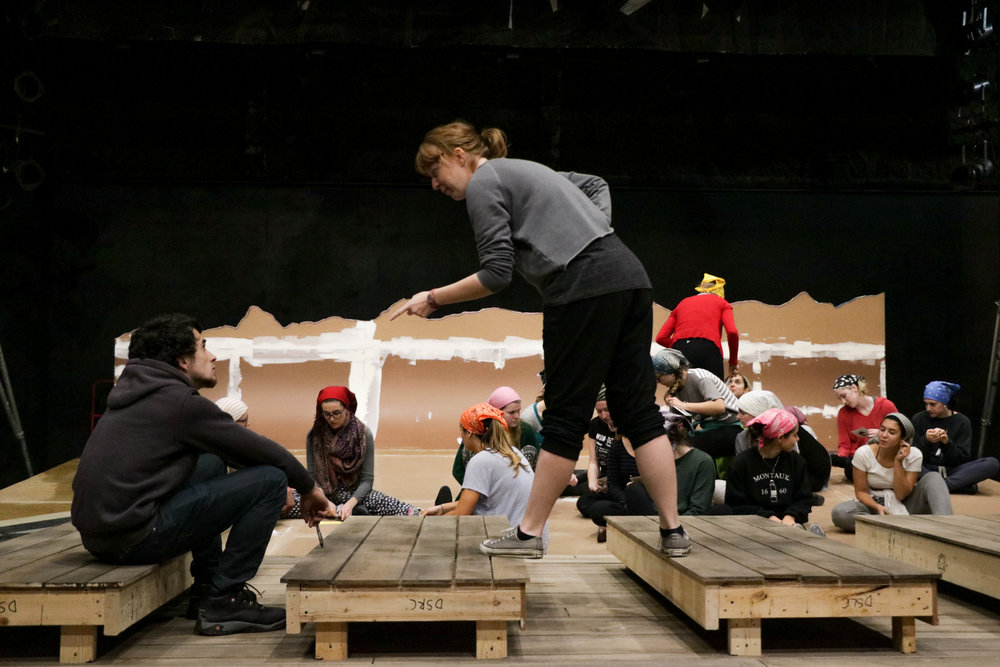 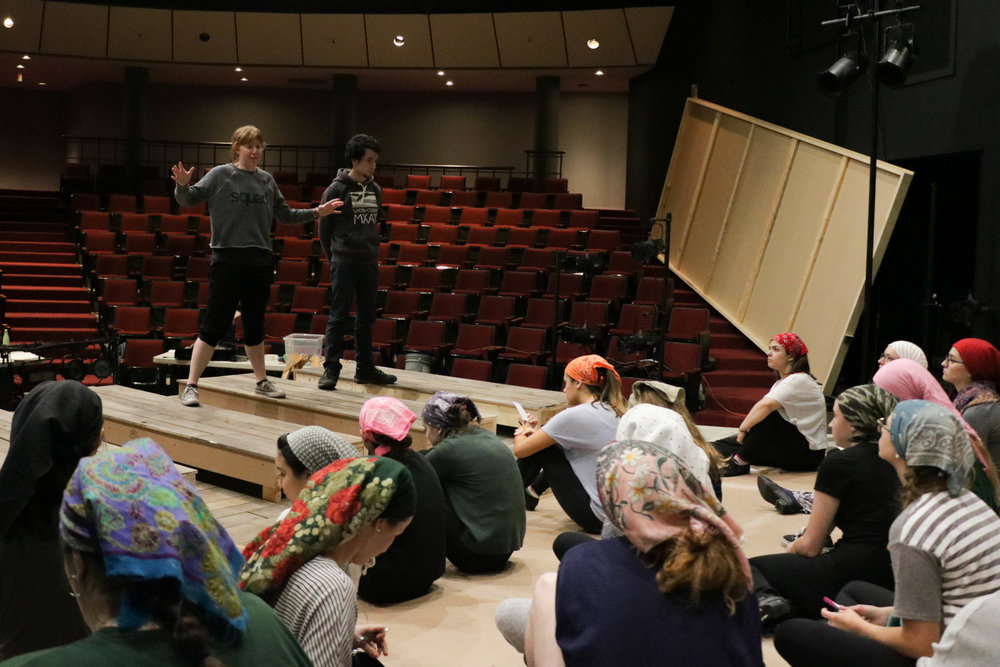 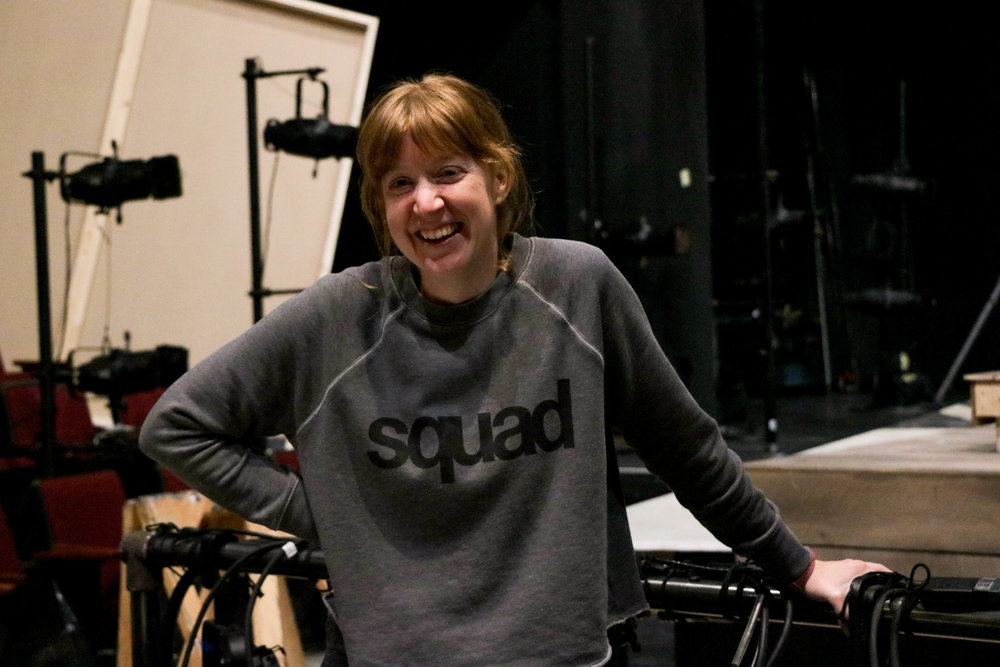