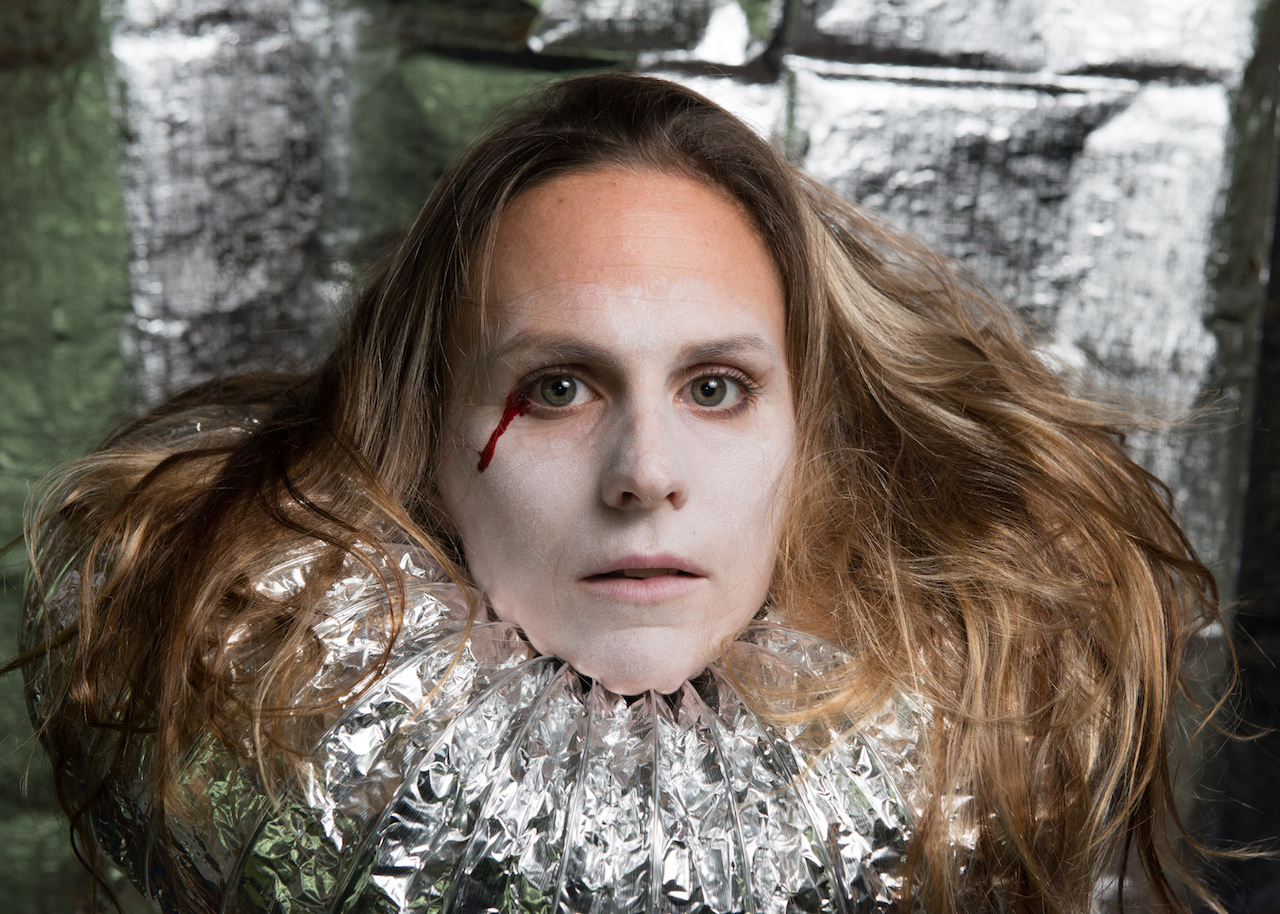 I had the chance to speak with alumnus Katie Gould ‘07 about her time at Skidmore, devising work, the post-grad theater scene, and her journey from Saratoga Springs to Philadelphia, where she is now makes theater professionally in addition to owning and running her own fitness studio.

Gould graduated from Skidmore College in 2007 with a B.S. in theater. Encouraged by Will Bond, Barbara Gulan, and Carolyn Anderson, she applied for the apprentice program at Actors Theater of Louisville and was accepted for the year following her graduation. This is what “started this journey of pursuing theater” for her, she tells me. It was there that she found herself fully immersed in the world of devised work. She explained to me that the head of the apprentice program at the time was “really interested in devised theater and community theater.” She went on to clarify that “community theater” did not mean “community theater like put on a show in your neighborhood, but community theater like of the community.” There, the apprentice company built a show about issues Louisville was currently facing. Reflecting on this process, Gould told me she found this a fascinating way of working: “meeting the people you’re making a show about, getting to know them, and figuring out how to turn their dealings and words into images and movements that reflect that.”

After her time at Actors Theater of Louisville, Gould planned to move to NYC and pursue acting, but wound up being cast in a play at Theatre Exile in Philadelphia instead. After a few years in Philadelphia, however, she decided to test the waters in NYC.  She describes her time there as being “fruitful in some ways but not really for my theater career,” and when she heard Pig Iron Theatre Company was starting a graduate program in devised theater, she moved back to Philadelphia to be a part of their first class. A hint of laughter in her voice, she tells me that she and her classmates at Pig Iron “were sort of pioneers: people who were coming together not knowing what this school was going to be like, just trusting the people who were building it and being really excited, and intrigued, and tickled by the possibility of two years of making theater from scratch.” It was there that Gould met many of her current collaborators; out of her two years at Pig Iron came her theater company Lightning Rod Special. 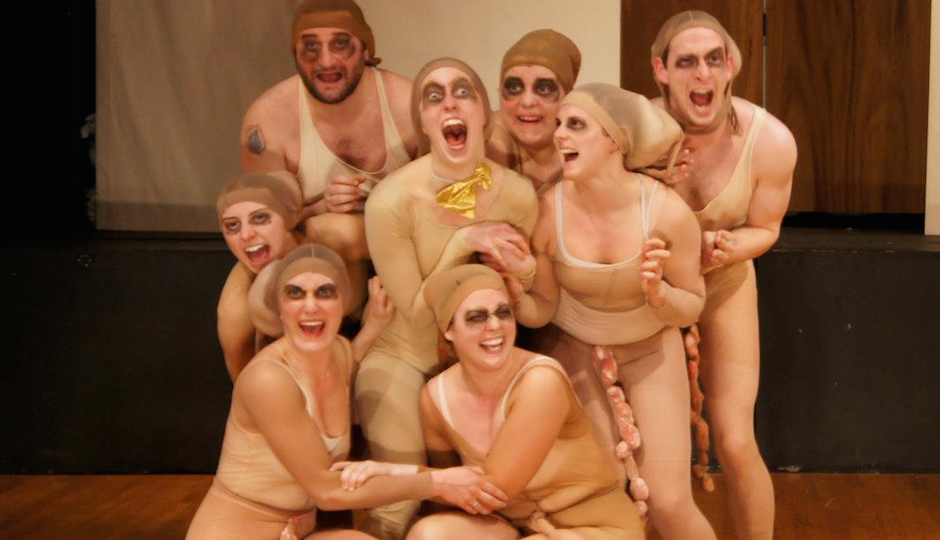 When I asked her how Lightning Rod Special has grown or changed since its formation, Gould let out a sigh, exclaiming “Oh, wow, so so much has happened since we formed the company.” After some thought, she told me: “we have started to figure out how we make as a company, how we make as individuals, and when it serves us to be represented as the company, or to be representing the company, and when to be just representing [ourselves].” Taking into consideration Lightning Rod Special’s recent work, this makes a lot of sense. In addition to creating and performing work with the entire ensemble, such as with their most recent show Unformed Consent, Lightning Rod Special has also served as a co-producer of the Obie-award-winning show Underground Railroad Game at Ars Nova, which was independently created by company members Scott Sheppard and Jennifer Kidwell. Gould also says she feels like the company is at a place “where [they] really trust each other, really challenge each other, and don’t rest until [they] feel like a piece is the absolute best version that it can be before [it’s presented].”

We began to talk about the differences between making theater in NYC versus Philadelphia or making work in Philadelphia to ultimately produce in NYC. She feels that “every year more and more artists are moving to Philadelphia because it’s so much more affordable [than NYC] and there’s just a great theater community there.” Despite all of the people she knows “making their living as theater workers, theater performers, artists, and designers in Philadelphia,” Gould wonders whether there is a “sustainable model [for theater-making] anywhere.” She tells me that she has plenty of friends “who are amazing creators who feel like they can’t do it anymore because they don’t make enough to live and they want to have families.” Despite this, however, Gould seems to have it all figured out: “I’ve got this other really flourishing career [as a personal trainer/fitness studio owner] but I still get to do a show a year, something that I’m really excited about, and something that could potentially be presented by a New York Theater.”

Toward the end of our conversation, I asked Gould about her time at Skidmore and if she had any advice for current students or recent graduates. “I still think about my training there, still use my training that I got there, especially from Will [Bond],” she tells me, going on to say, “I would go in all the time for extra Suzuki training, practice viewpoints, come up with solo pieces. I wanted it more and more; I really craved the training, and craved getting deeper into the work, and thinking further outside of the box on how to make work.” Gould had two major pieces of advice to offer. The first: “document the work you’re making in college because it’s not bullshit.” The second: “don’t have an ending too soon. Let yourself work on something for really long periods of time. Be bold and try things out and put them on their feet and let people watch but don’t think of that as the end.”

Gould told me she regrets not documenting the work she herself did at Skidmore more closely. “I’m sure I’d be somewhat embarrassed to look at it now, but I think it would actually be helpful in some ways cause there’s cool ideas that I had that, now that I have better tools, could turn into something kind of awesome,” she explains. One such work that she wishes she had documented is a piece she created with several other senior women. While Gould recalls that it was based on some of their female performance idols, she cannot remember what they called it; “maybe like ‘The Birdhouse’ or something like that?” After a bit of digging through the rarely-opened filing cabinets in the upstairs of the JKB, I discovered that while Gould did not document this piece, fortunately, the “JKB Newsletter” did. The show was called “Muse,” and staff-writer Brian Griffin ’07 wrote the following on Gould’s performance: “The performance art of Karen Finley influences the presentation Katie Gould delivered to the audience, noting the grim and gritty realities of life and expressing the raw emotions an average woman may normally wish to repress.” When I asked Gould what the biggest takeaway from her undergraduate experience was, she mentioned “the freedom that the department gives you to make your work inspired by you.” 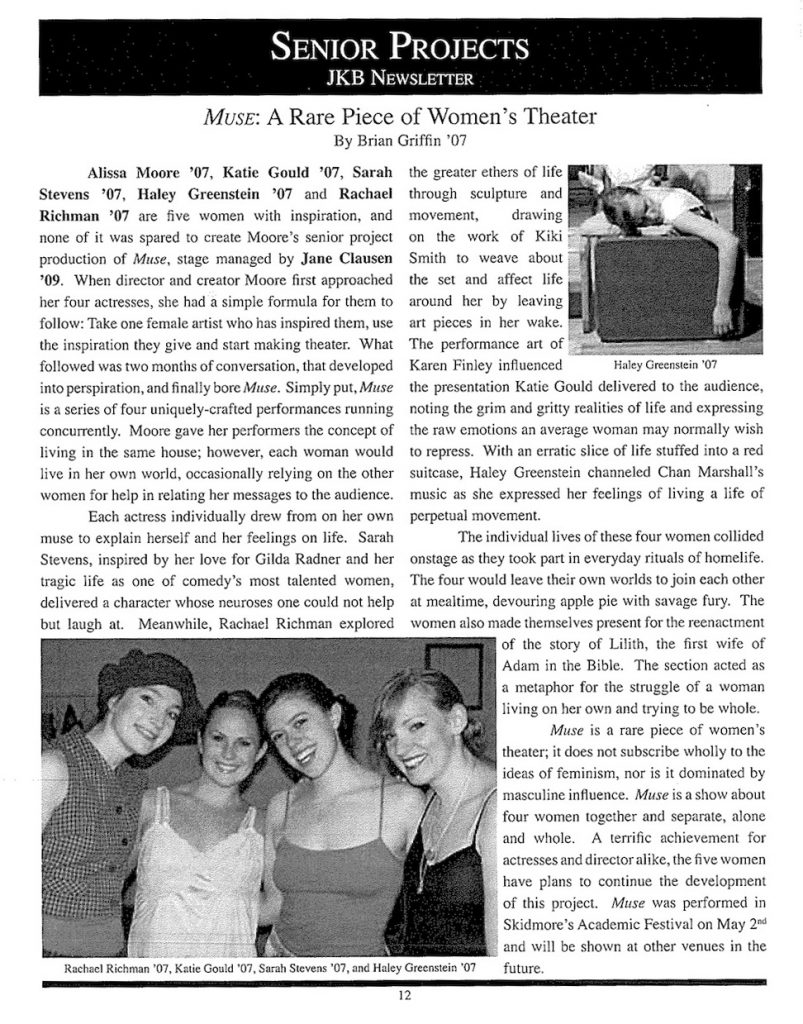 Rachel Karp ’18 is an English/Theater double major and co Editor-in-Chief of the Living Newsletter.