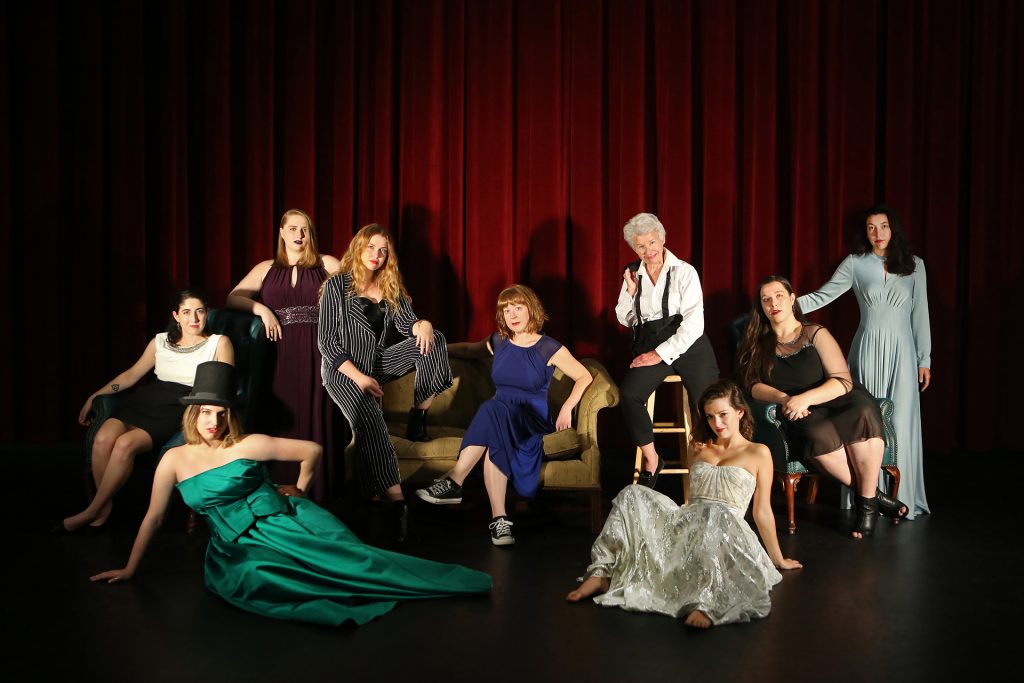 The Skidmore Theater Department happily welcomes a season of all female directors. From the Studio Labs to the Mainstage, the women of the JKB came, saw, and conquered each of the coveted directing spots for this year’s Fall season. I was lucky enough to hear from each of these dynamic directors about what they chose for the season, why they chose it, and what it is like to work with or be an established female director. Read on to find out why not only JKB’s future, but also its direction, is female.

Because I knew it would be a challenge, and it has been. I’ve never directed Albee, explored absurdism, or worked with such a small cast before. This play is quite a monster to me. The idea of two people talking on a bench for an hour is inherently boring. It is my job, though, to make two people on a bench, sometimes carrying on non-linear conversation that doesn’t quite make sense, worth watching. I think that both the actors and I have already grown a lot in facing such a challenge, and I hope that we have, in some capacity, succeeded.

What has it been like to work with Rebecca Marzalek-Kelly & Carolyn Anderson?

I think the two of them have inadvertently created much more of a community among the directors this semester. I’ve been involved in assistant directing a seminar or directing a lab for the past four semesters and I have never felt this sense of camaraderie among directors of all projects, students and faculty alike. I think that sense of support is really crucial— especially among women. There is this expectation that ambitious women can only exist in fierce competition with each other, and Rebecca and Carolyn have set a wonderful example in which that is very much not the case. We’re all quite collaborative and excited for each other.

Why did you choose to devise this project?

Because I found that so frequently I wasn’t seeing theater that I found to be compelling. I started to question what it was that made theater compelling to me. What I discovered was that I’m interested in theater that has managed to genuinely make me believe what I’m seeing. So I decided to try to devise a project that could carefully toe the line between hyperrealism and theatricality. If I can believe the work I’m creating, hopefully I can build that same trust with my audience.

What has it been like to AD (Assistant Direct) under Carolyn Anderson?

Carolyn is brilliant. Her style of directing is unique in the sense that she doesn’t try to immediately build the final product. She works in intermediary stages, which allows for exploration amongst the actors. At the same time, her attention to detail and care for specificity makes each step feel just as necessary as the last to build the final product. I feel as though I learn something new everyday.

After reading dozens of plays, Lemons(x5) was the first I wanted to immediately read again. I ended up reading it three times in one day and I woke up the next morning still thinking about it and the challenges it presents. The play is often described as being about language, however to me the play is about more than that. It’s about how we communicate with each other, and specifically, how we communicate with those we love. This show is both a love story and a political parable. I strongly believe both narratives are uniquely relevant to where I personally am now in my life and where we are today as a society.

What has it been like to AD under Carolyn Anderson?

I’ve always considered myself extremely fortunate to have so many wonderful female role models at Skidmore. One of the role models I have admired most during my time here is Carolyn. Being able to work directly with Carolyn this semester has been a true gift. Watching how Carolyn leads a room and commands a space has honestly been nothing short of inspirational to me. Her work is clean and precise, but also incredibly collaborative. She has personally given me a confidence in myself that I will carry with me throughout my life and in my own projects.

Searching for a play to direct in the wake of the 2016 election was a challenge. I felt surrounded by echoing rally cries of “this is the time to make art!” and “we must protest in the streets,” but had no idea what kind of art to make or how to protest. Eventually, I settled on Antigone. In a time when we are looking for answers, Antigone allows us to revisit the past and glimpse into the future. Antigone was the original ‘nasty woman,’ or, as Malina more eloquently puts it in the preface to her translation, Antigone embodies an “ancient archetype: a woman alone defying the power of the state.” She teaches us of our civic responsibility to defy the law when the law is unjust.

What has it been like to work with Rebecca Marzalek-Kelly & Carolyn Anderson?

Carolyn was the first person I told when I decided I wanted to direct Antigone last spring. Since then, she has provided me with invaluable guidance, support, and resources; I definitely would not be doing this project without her!

Working with Rebecca on Let The Right One In this semester has also been a dream. She has a calm, kind, but extremely powerful way of commanding the room that inspires me everyday. Plus, I’m learning a lot about how to bring an element of magic into the rehearsal process; there have been lots of secrets and tricks so far, for cast and future audience members alike!

Small Mouth Sounds caught my attention a few moths back because of the elevator pitch that accompanied it—“A bunch of people go into the woods and take a vow of silence. The show is pretty much all stage directions.” At the time, that sort of rehearsal process sounded hilarious. All of the inherent challenges and laughs that seemed built right into the script attracted me to the play. After some time passed, I was worried that maybe I had screwed myself over, that people would get bored in a show with hardly any words. As valid as some of these hesitations may be, that gave me the nudge to tackle them head-on. I’m lucky to be working with a rad cast and stage manager, and I’m looking forward to the collaborative sort of environment we’re going to work together to make.

What has it been like to AD under Rebecca Marzalek-Kelly?

Rebecca has a wonderfully calming presence, but the woman knows how to get shit done. It is great to observe Rebecca as we move in and out of production meetings, rehearsals, and conversations. Seeing the turning gears inside her head is uplifting and infectious. I’ve noticed the parts of herself that she gives to the project, and I’ve learned so much from her keen eye for detail. It’s sort of crazy being a part of a piece of this capacity. Just a couple of months ago, we were talking in hypotheticals in a boardroom in New York City; now we have thirty-foot trees and a massive metallic jungle gym. Watching how quickly things come together has been mind-blowing, and Rebecca has gone out of her way to foster an inclusive and eccentric atmosphere every step of the way.

Mira, why did you choose to direct this project?

I would say Adina was kind enough to choose me to direct, rather than the other way around. I am incredibly excited to work on a piece that is in development and to have the opportunity to reach outside my comfort zone with a musical! Though Unison focuses on a community of band kids, it resonates with me as someone who spent most of high school and pretty much all of college hiding with the theater kids. No matter what age we are, I think everyone is searching for a community of people who share the things they are passionate about.

Adina, what has it been like to be a part of this all female season?

I think it’s really wonderful to have this season led by all women. Not only because I get to be in a room with all these great and talented directors, get to hear what they’re thinking, and then get to see them put it into action, but also because it gives me hope for the future of the world, and my own future as a woman in the arts. Seeing women in the positions I dream of fulfilling—writing musicals, conducting shows on Broadway—makes it all seem possible and inspires me to try to achieve greater things. I hope this season inspires some students to go after what they dream of, too.

Show: Let The Right One In by Jack Thorne

There is something both dark and hauntingly beautiful about this play that I connect with aesthetically. The narrative is gentle and magical, while also being brutal and weighted with the prevalent themes of bullying and loneliness. Instantly, I heard the rhythm and saw the movement of this story and knew its dichotomy was something I had to tell.

Any advice for future female directors?

Be bold. Be creative. Be confident. Be humble. Be kind. Hold on tight to your good ideas and meditate on them until they’re solved. Let go of your ideas that aren’t good enough and work harder. Only leave your best work on stage.

Actually, students chose the play! We had a company poll about the kind of work they wanted to do and asked them to list some plays. Big Love was on their lists. I also love the work of Charles Mee. And this play was also on my list! I’m interested in the themes of the play because they are current world themes and questions. Who are we responsible for? Who is a refugee? What is masculinity? Femininity? Feminism? Otherness? Love?

Any advice for future female directors?

I would tell directors starting out to keep directing. Just find a play, actors, and do it! Keep active and visible. Always find a way to be in a theater. Get in the rehearsal space. Be active! 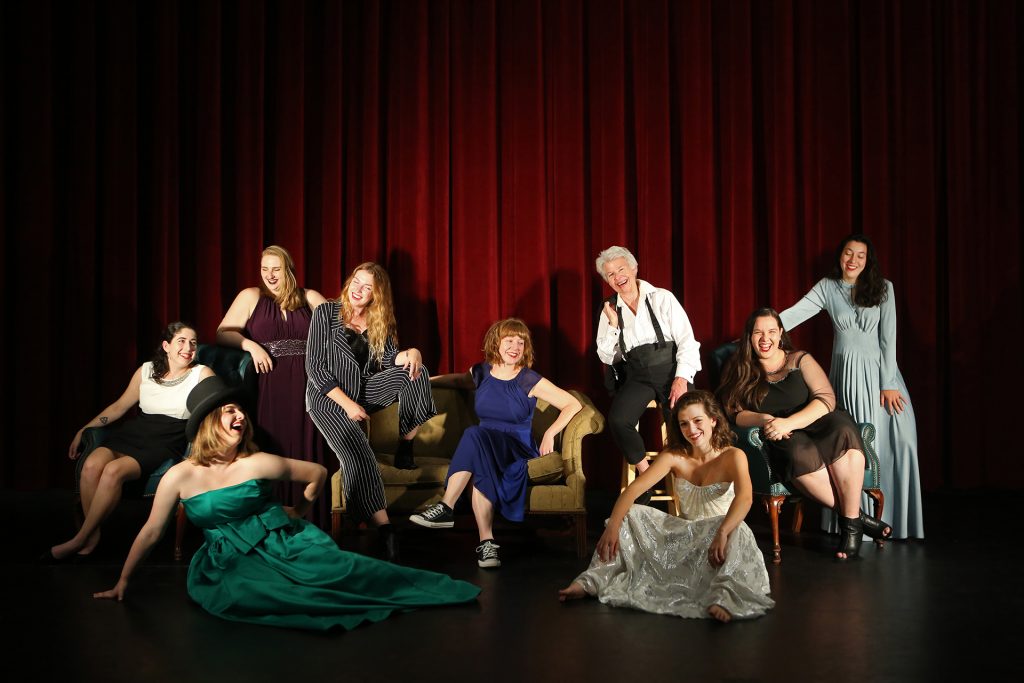