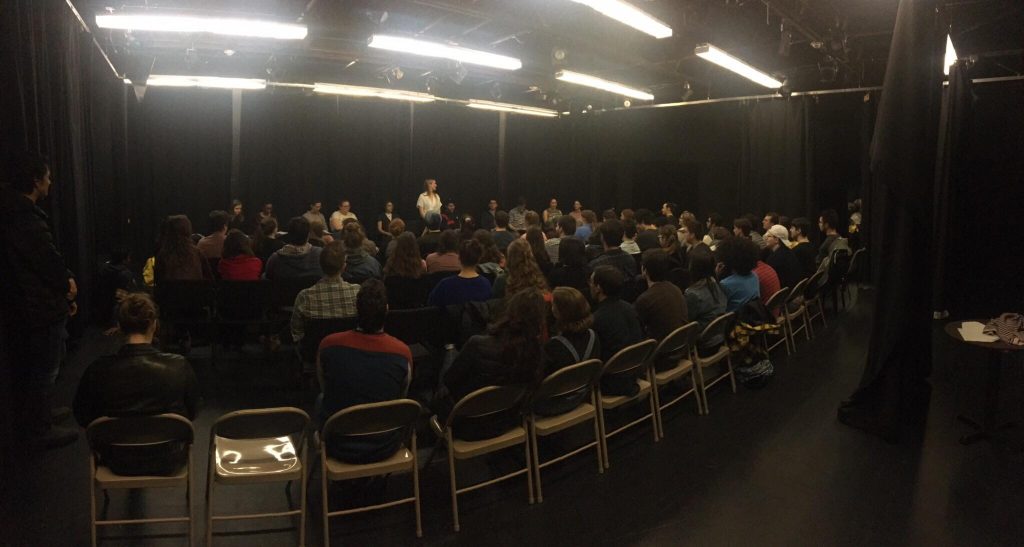 Reflecting on Playdate with Kallan Dana ’19

When we enter Studio A, the actors sit in a row in place. Their scripts are in hand and they greet the audience members with a smile as they enter. The cast consists of eleven members: three men and eight women. The three men sit directly in the center, women surrounding them on either side. Just from the positioning it becomes clear the men are the center of our focus, whether we like it or not. As the play begins, each actor stands when their character’s name is announced then sits back down, and gets ready to start.

Playdate, written by Junior Theater/English double major, Kallan Dana ’19, tells the story of Hugh Hefner as he loses control of his mansion and those that dwell within it. The characters include his three children, ex-wife, current girlfriend, her twin sister, Playboy bunnies, and a special appearance from Marilyn Monroe. The loss of control happens masterfully in Dana’s one act. It’s hysterical, uncomfortable, and easy to feel like a fly on the wall of the Playboy mansion. Dana’s writing, however, goes beyond humor, and ventures on to critique the gendered system in which we all live. Dana informs us of the ways we benefit, and suffer, from the societal gender roles we fall into by giving each character a clear and distinct voice. This is specifically seen through the characterization of the “Bunnies”—a group of four girls who almost always speak in unison. The Bunnies talk in high pitched tones, are often over-sexualized in their actions and statements, and rarely interact with the other characters.

I found the whole play to be extremely engaging, facetious and reflective on the way we prioritize, respect, and behave toward each gender. I wanted to know more so I asked Kallan Dana a few questions about the process. Here’s what she had to say:

What was the process like from first to second draft?

I received a lot of specific and helpful feedback from my peers and instructors after the first reading. I was able to get a better sense of what people wanted to see more of, of what elements of the world felt unclear or incomplete. Several people commented that they wanted to see more of the Playboy bunnies. This was a useful starting point for me, and it informed most of the new scenes that I wrote. At times, it was very hard to motivate myself to write, especially just working on my own. I tried to set small deadlines for myself, but I still don’t feel that what exists now is the full version of the play I want to create. It’s still in process!

How did you go about directing/rehearsing the piece?

[Director] Erica [Schnitzer ’18] and I were on the same page about not wanting to be overly ambitious with the process. We recognized that all of our team had other commitments outside of our show, and also that—no matter how well directed—a reading will never completely represent the intent of a play that is meant to be fully staged. With that said, we sought to make sure that every choice was as specific as possible, and that every actor had a clear sense of their character and intent. Vocal inflection and quality was very important to us, so we spent much of the process doing moment-to-moment work with actors on their voice choices.

What most surprised you about hearing your work read out loud?

I think I imagined that the play’s humor would sound very dry, so it was surprising to see how much the audiences in both readings laughed out loud, often times at parts that I had not even intentionally written as funny lines. It made me realize that some scenes are much longer and shorter than I predicted they would be while writing them on the page. I also tend to write a lot of “clues” for actors about their speech patterns in my unconventional and/or non-grammatical punctuation. I realized, however, that at times what makes sense to me for punctuation is not how any one actor will interpret the typography. This helped me become more comfortable with an actor’s interpretation differing from my initial, internal intent. Which is great because, honestly, it’s not as though my intent is always the thing that will serve the piece best.

What were you hoping for the audience to take away from the show?

I hope that the audience had fun, laughed, felt a little gross and queasy, and realized that our present gendered system is a prison that we all inhabit against our will, whether we benefit from it or not.

Olivia Bagg ’19 is an English major and first time Staff Writer for the Living Newsletter.