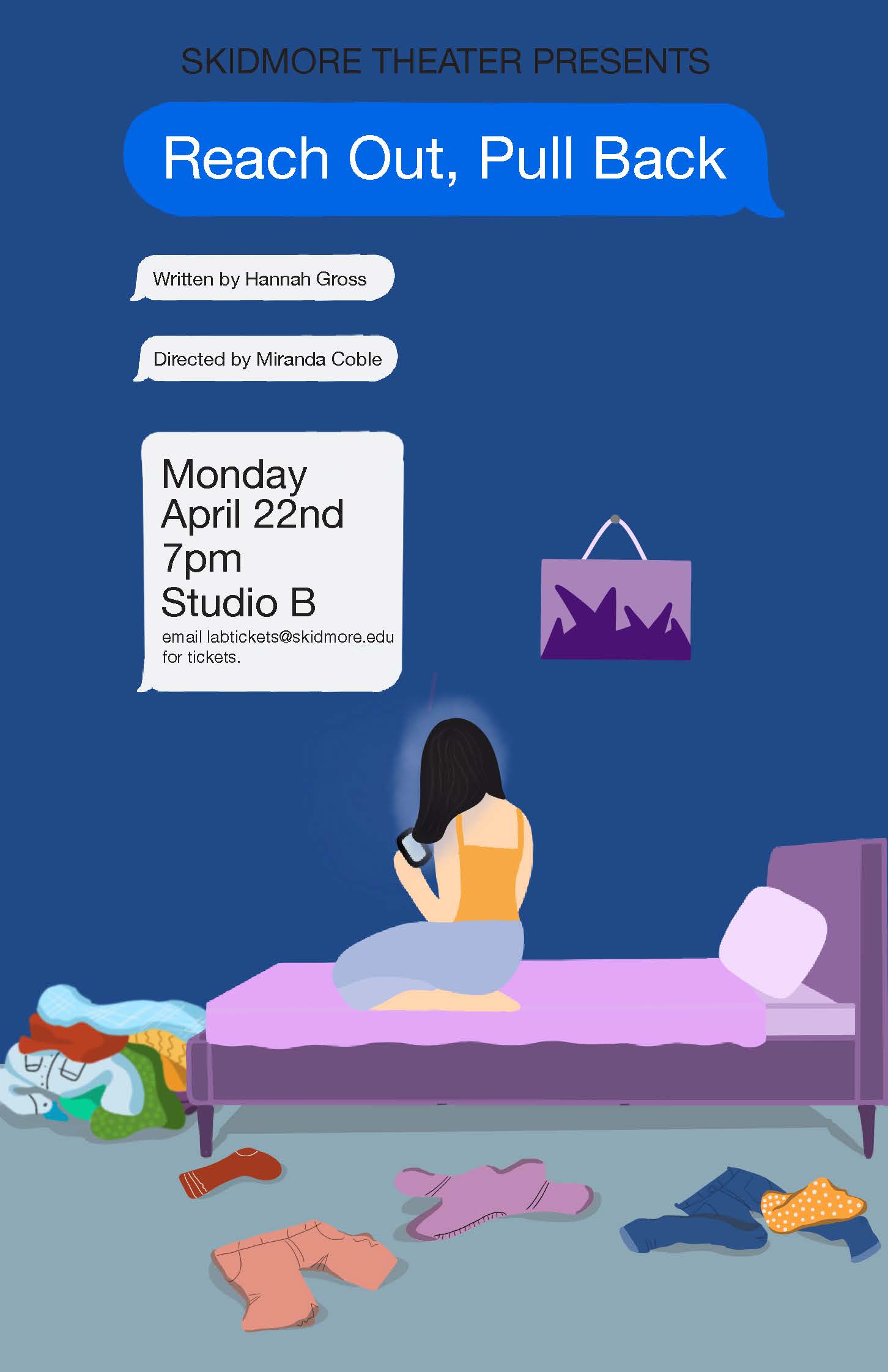 The Skype’s the Limit: A Look at Reach Out, Pull Back

What happened on Saturday night? In Reach Out, Pull Back, this semester’s Playwright’s Lab, written by Hannah Gross ’21, that’s the first question immediately on the minds of our five protagonists. The quintet, who communicate entirely through Skype calls, all have varying amounts of knowledge about that particular night’s events. They all know something happened involving Liz (Kathryn Stathakis ’22). Emi (Meg Gray ’22) is well aware, Val (Char Biggs ’21) isn’t sure but is putting the pieces together, and Dia (Mia Brierly ’22) and Mar (Shelby Fairchild ’21) are in the dark entirely. Over the course of the play, revelations come to light not just about what Liz got up to on Saturday night, but about the rest of the crew as well. We never see them interact with each other in person, as each conversation only takes place by text or over Skype.

In Miranda Coble ’19’s staging, the actors face forward in their chairs to indicate their talking over Skype. They also read stage directions relevant to their characters, with other moments narrated by Carrie Baker ’20, who also plays Dia’s domineering mother. Reach Out, Pull Back is just as much about each individual character as it is about how they interact with the others. They’re in control of their actions and how they present themselves. They each have their own way of sitting and typically look directly out into the audience. Each new revelation, be it about a character’s sexuality or finding out who posted scandalous photos from that infamous Saturday night, has everyone on the defensive.

Confrontation is a big part of Reach Out, Pull Back. Gross, who presented a reading of an earlier draft at the start of the semester before going back to revise, takes her time in weaving that ever-so complicated web of teenage drama, which is just as tricky to figure out in a fictional setting as it is to figure out in real life. Pretty much every character has to face the music in front of their peers for something. Why is Dia letting her mom control her life? Why is Emi so unsympathetic and blunt? What is Val not telling friends? Truths aren’t so much coaxed out as they are surgically ripped out from each character. That’s how high school drama works.

And then, also as in most high school drama, it blows over astonishingly quickly. For all the complications, the confusion about who did what, and the assorted hurt feelings and depression, they are able to come back together again. One gets the impression it could have been sorted out even earlier if they had wanted to, but if there’s anything these conflicts prove, it’s that even if the solution is simple, the road to that solution definitely isn’t.

Reach Out, Pull Back sucks you in to this world where every new conversation is a dramatic new development in a complicated puzzle of friend drama, but with Gross’ ear for dialogue and Coble’s mindful direction, it’s a puzzle worth trying to solve.