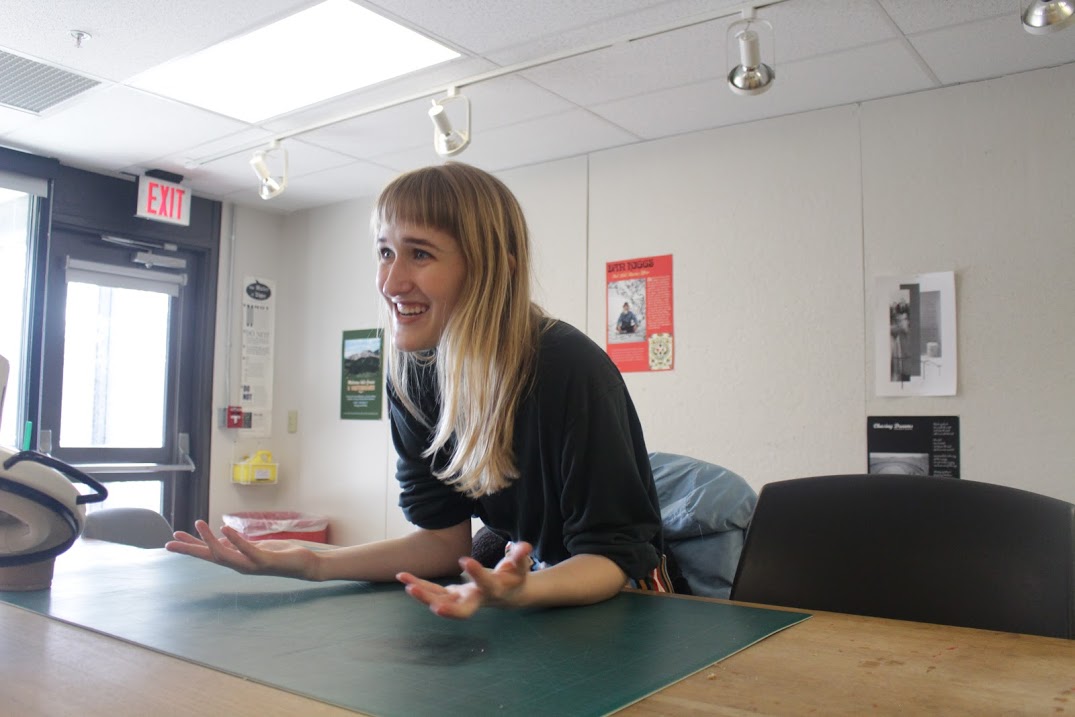 By Kallan Dana and Philip Merrick

For the entirety of the past academic year, you could walk into the Theater Management office any day and find senior Finley Martin sitting at a computer or hunched over her iPad, face pressed an inch away from the screen as she worked on a poster for the department. You’d walk in and she’d beam at you, chirp hello, then return to her design. We met Martin in the Management office one afternoon this past spring and chatted with her about her experience during her time at Skidmore.

As of May 18th, 2019, Martin is an alumna of Skidmore College. She leaves behind not only the school, but her position of two years as the Visuals Manager for the Theater Department. While Martin was a prominent member of the Skidmore Theater community, she came to the school positive that she was “never gonna do theater again.” Her first semester at Skidmore, she barely was involved in the department, instead devoting herself entirely to her Studio Art major, where she was intending to be a painting concentration. 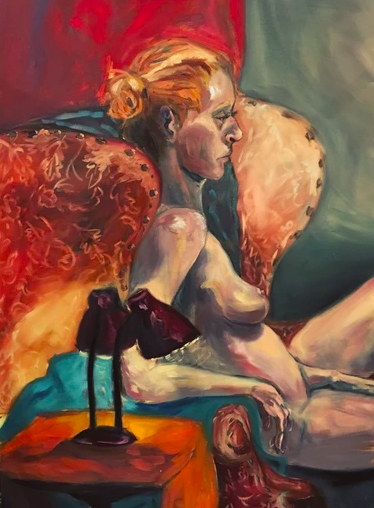 “I thought I was going to leave college as either a painting professor or an art teacher at a high school,” she says. She had spent much of her youth keeping notebooks “full of fan art,” doodles and drawings of preexisting characters filling the pages. Her high school art teacher had encouraged her to pursue painting, so she arrived at Skidmore prepared to focus exclusively in that medium–until she took a Communication Design class. “After taking that class, I realized that that had been my first love,” she explains. “I was like: you can make real art digitally. I was hooked. I changed my concentration. I changed my advisor. I’ve been doing it ever since.” 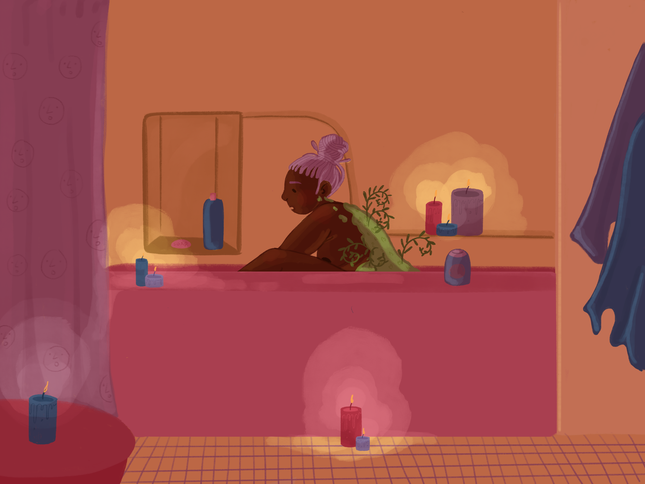 As she was getting reacquainted with her love for digital art, Martin also found herself getting involved in theater again, in spite of everything she had anticipated coming to college. She auditioned for the Theater Department her second semester Freshman year, was cast in the studio lab Love and Information, and from that point on began acclimating to the theater community. By the start of her Sophomore year, she was working as the assistant to the Visuals Manager at the time, Paris Baillie. She worked as her assistant for the entirety of her sophomore year, and took over for Paris after she graduated. “I feel like it took me a while to settle into the Theater Department,” she comments.  “My Junior year was the first time I really felt like I had roots.” 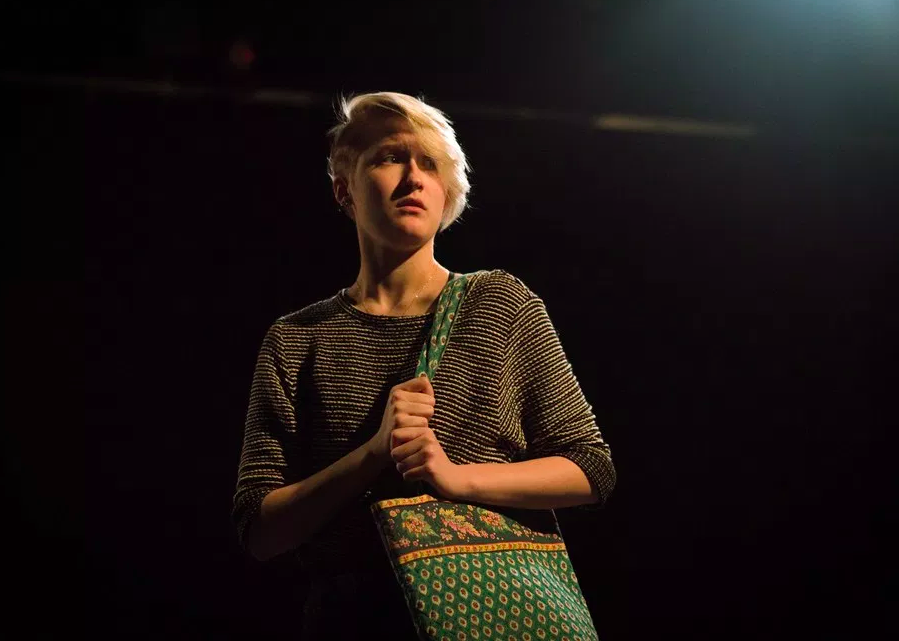 When Martin became full time Visuals Manager, she began designing all of the posters for the Studio Labs, as well as for the annual House Party. Her posters at Skidmore vary dramatically in concept, colors, and structure, but all are markedly her style: cartoonish, bright, bubbly. “I love my job because people get so excited to get their poster,” she says. “Their show is their baby, and I get to make this thing they get to keep forever.” 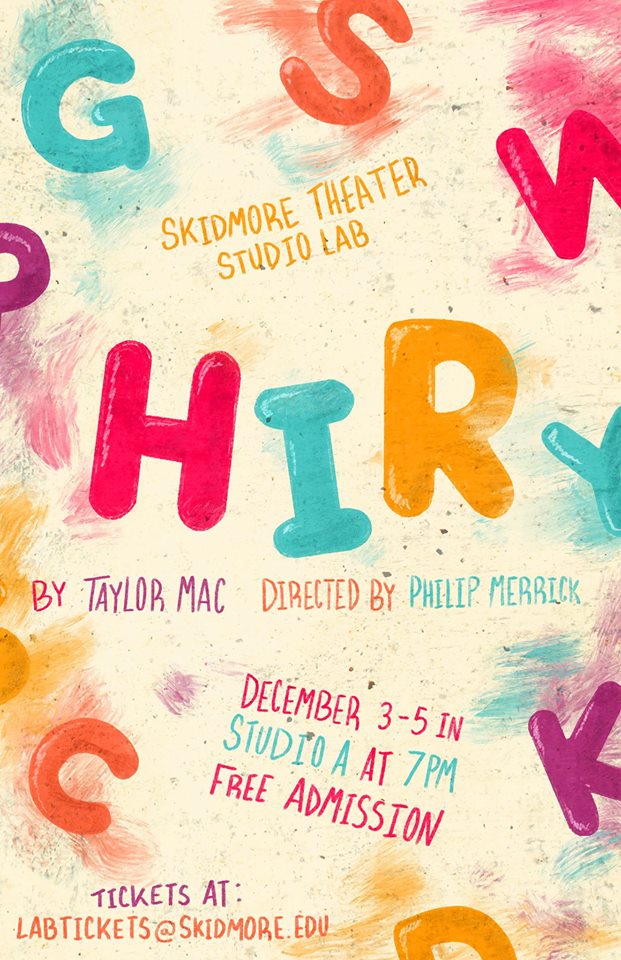 When working with an artist on the design concept for their show poster, Martin says that she tries to figure out and highlight through her design what is important about the show–without giving anything away. Sometimes the director can give helpful insight, but other times their articulation might not be useful for Martin’s work. “My job is to help the people who have the big exciting ideas that may not necessarily work and translate that into something that’s going to be appealing,” she says. 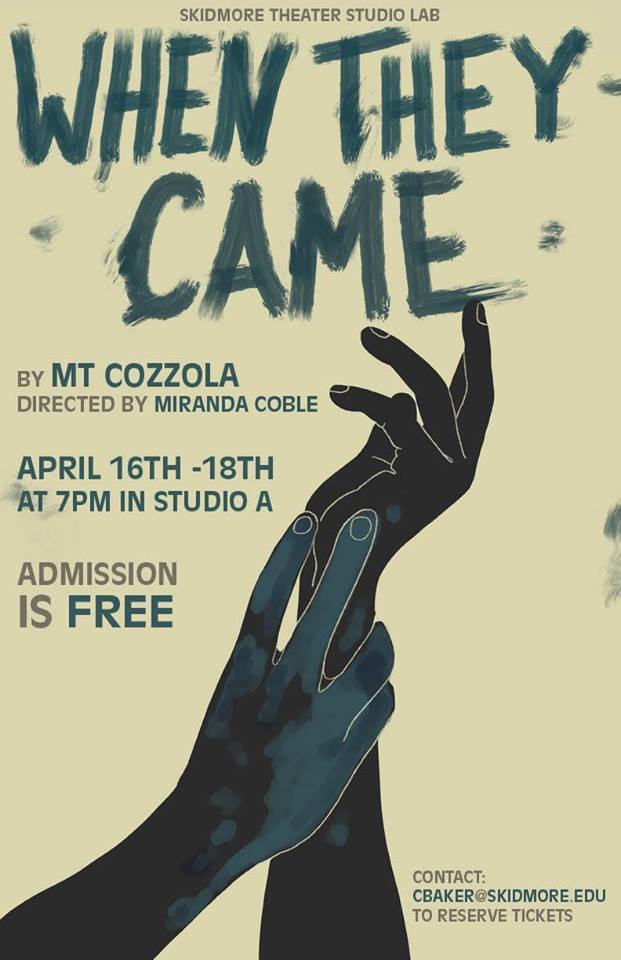 Some of Martin’s favorite posters to work on were ones which required her to draw a lot, like Fall 2017’s Small Mouth Sounds, directed by Sam Grant ’18, or Spring 2018’s The Colored Museum, directed by Grant Landau-Williams ’19. The latter poster required extra research from Martin, as Grant asked that she include Afrofuturist elements in the design. “I researched Afrofuturism for an entire day,” Martin recalls, “because I was not going to get it wrong.” 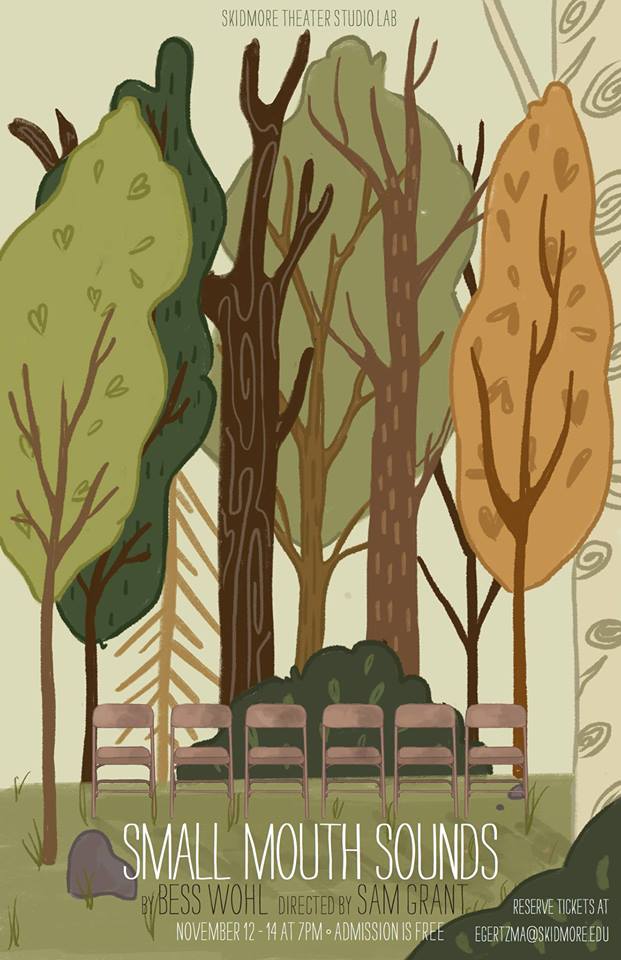 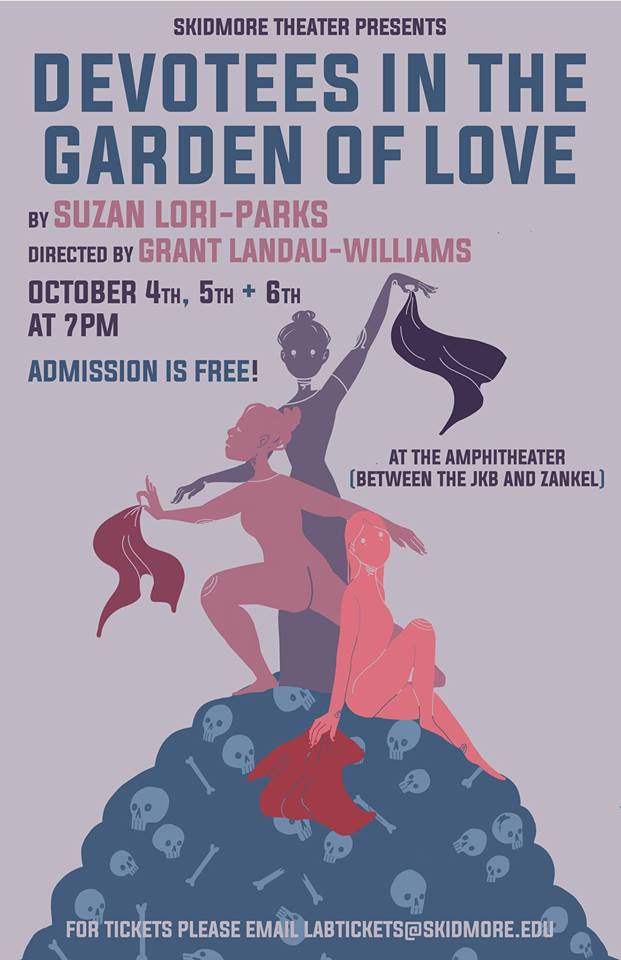 Martin’s Devotees in the Garden of Love poster (2018)

In her time at Skidmore, Martin actually designed two posters for Landau-Williams, the second being for Devotees in the Garden of Love (Fall 2018). This poster was a particularly unique and exciting one for Martin to work on, as she was an actor in the production as well. Throughout her time working as a visuals assistant and then manager, Martin continued to act in shows every semester, all the while completing her Studio Art major. “I feel like this is my home,” she says, gesturing to the theater around her. 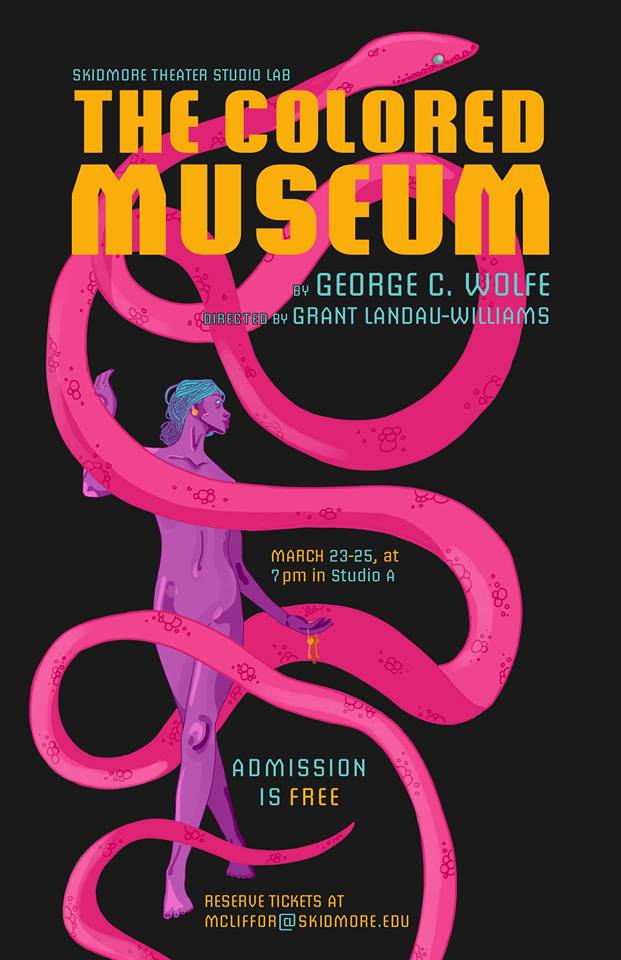 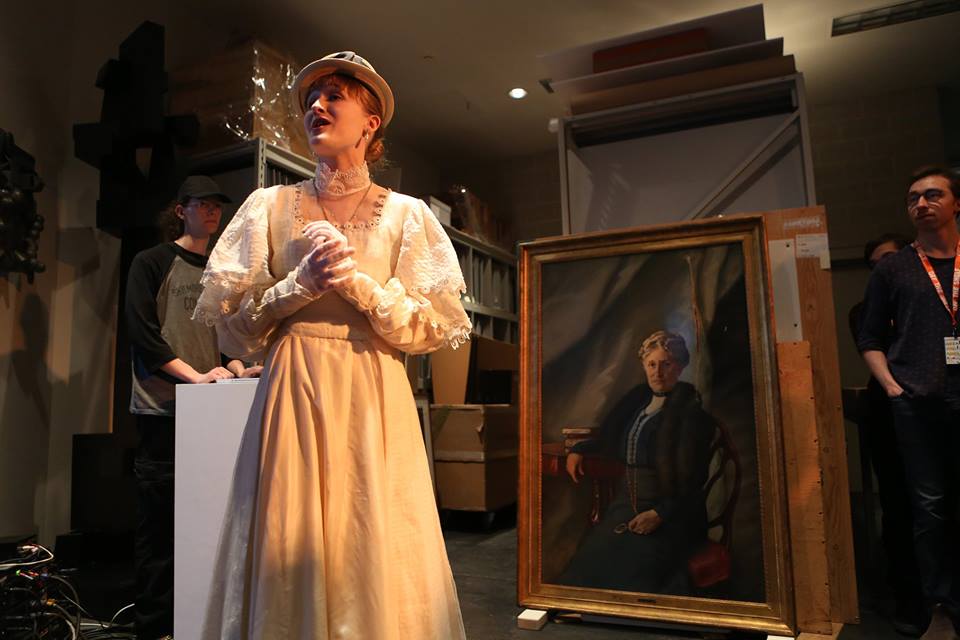 It’s at this point in the conversation, though, when Martin takes us to her second home–the computer design room in the Art building. She walks us around, showing her art portfolio, designs accumulated over her four years at Skidmore. Just as she is in the Management office, Martin is completely at home in the studio. She shows us to her favorite computer to work at before settling down at one of the long wooden tables. 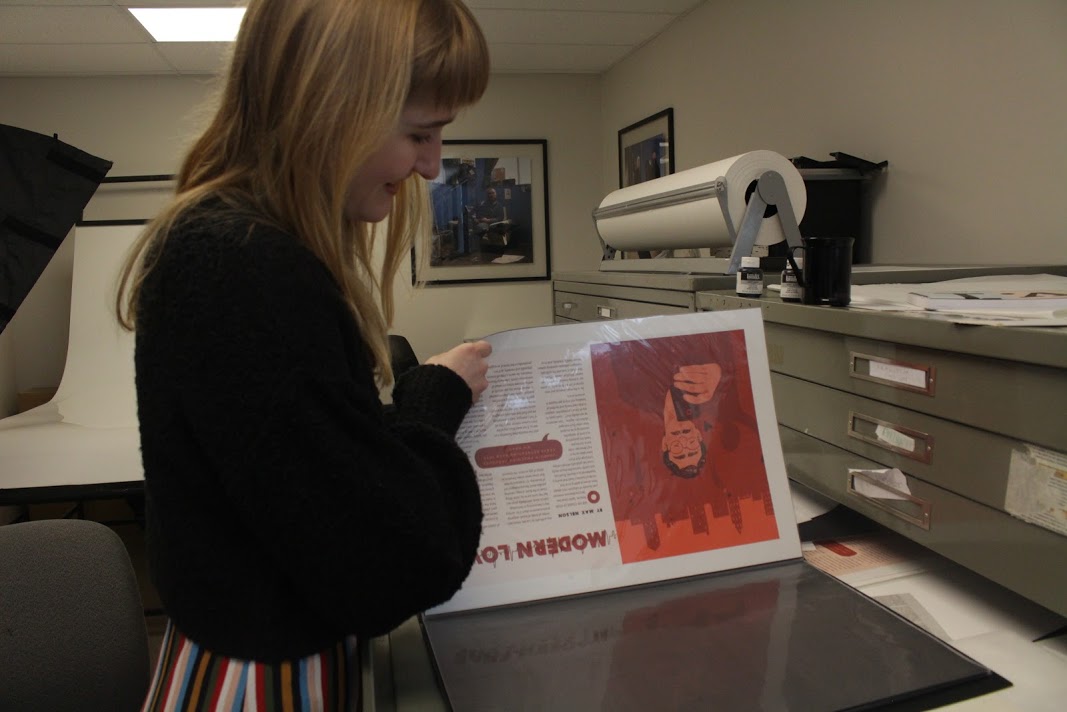 Martin in the Comp Design studio.

Martin began working professionally while still a student at Skidmore, as Sue Kessler offered her a job designing for The Bushwick Starr. Finley began by designing a poster for The Bushwick Starr’s annual Taste of Bushwick Festival (this same poster design is being used again for this year’s Taste of Bushwick Festival). Then, after that, she drew artists portrait’s for the theater’s full 10th anniversary season. “Those posters actually got me the job that I’m doing now, which is for Woolly Mammoth Theater Company in D.C.” Martin tells us. In fact, you can go on the Woolly Mammoth website now and see Martin’s portraits there. “Having people who I don’t know reach out to me to do work is really cool,” she gushes. 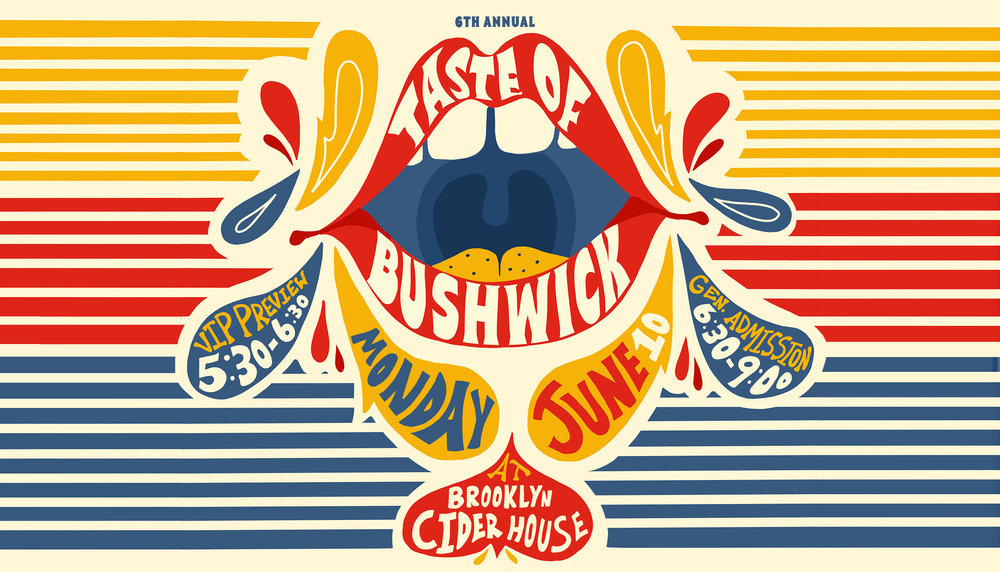 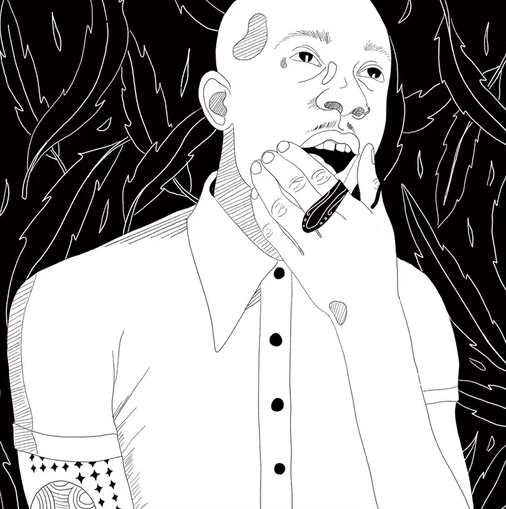 Martin is open to whatever direction her career continues to go, but she says that she’s excited by the prospect of making designs and illustrations for theaters. “If I could get a designer or illustrator job somewhere, that would be exciting,” she says. “I’m looking for something that has a lot of creative opportunities.” When we ask her a final question–if she plans on continuing to act at all–she laughs. “Every time I have a transition in my life, I tell myself ‘that’s the last time,’ but we’ll see!”

“It’s really hard to balance being deeply involved and invested in both the Art and Theater Departments at Skidmore, and I say that from personal experience as a Skidmore alum who tried to do the exact same thing! But Finley struck that balance beautifully, cheerfully, and like a pro. She really exemplifies Skidmore’s trademark student– one who flourishes in various disciplines. She also strikes an important balance as an artist who does marketing design, in that she listens and translates people’s ideas into being and yet infuses her own totally unique style into the work. So you end up with something true to the project, but run through the Finley spin cycle–it always comes out a little shinier, fresher, and more vibrant than you could have imagined.”

Kallan Dana and Philip Merrick are recent alumni of Skidmore College and the former Co-Editors in Chief of the Skidmore Theater Living Newsletter.