Temperatures are beginning to drop at night and the campus pathways are flooded with the familiar sight of book-laden students, which means that it’s the end of summer at Skidmore! Some students in the theater department weren’t going to let something like the end of classes keep them from being involved in theater, and a few of them have shared their stories for this article.

Over the summer I was a Stage Management Intern for the Richmond Shakespeare Festival in Richmond, Indiana. The season lasted the first half of the summer, during which we put up productions of The Tempest and Hamlet. In just a few short weeks, I helped to transform an abandoned piano factory into an Elizabethan theater fit for performance. Since the space was essentially an empty concrete pit with a tin roof over it, we had to build everything from scratch–the set, the booth, risers, dressing rooms, box office space, props and costume storage had to be constructed by tech interns. I got way more than I bargained for from my time at RSF, and ended up spending a great deal of time in the scene shop on top of my SM duties. My experience over the summer helped me to hone my skills as a stage manager. I never had to deal with a tornado siren blaring during Q2Q but now I have! Waking up at 6:00 and finishing work at 1:00 in the morning every day was rough, and it was so hot due to the lack of air conditioning, but it was worth it. It’s experiences like these that help to advance me as an SM. I also ended up making incredible connections with such wonderful people. Meeting young professionals in the industry and talking about their experiences was fascinating and incredibly useful, especially as the youngest person there. We ended up organizing a sort of roundtable discussion where the interns got to ask the staff about how they’ve been able to navigate the theater industry for so long and I loved it. I got to work with a diverse group of people passionate about theater, and got to develop in almost every aspect of technical theater! 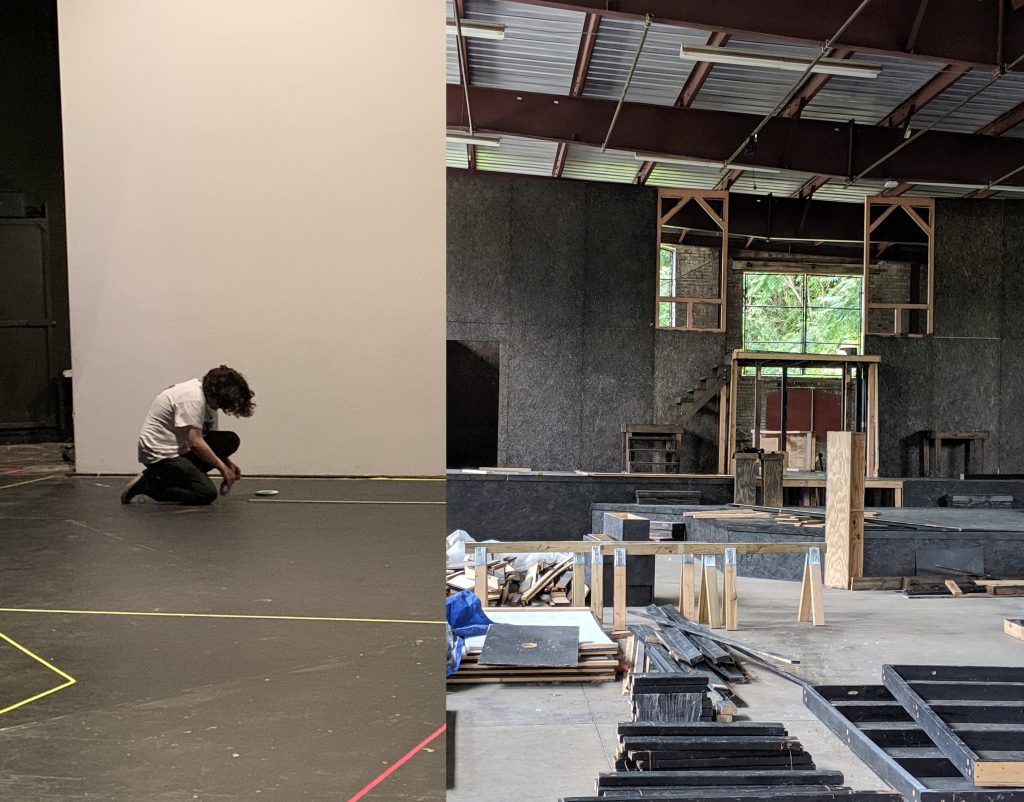 Cassie Clifford ’21 working on the build for a production at Richmond Shakespeare Festival.

This past summer I did an acting internship with Berkshire Theatre Group, a theater company located in Berkshire County of Massachusetts. I was one of a six-person intern company that lived, trained, and performed together for the better part of 11 weeks. We worked 6-7 days a week from about 8am to 11pm doing masterclasses, workshops, and rehearsals led by incredible instructors with experience in film, television, theatre, dance, and music.

In addition to all the training, I had the opportunity to understudy a role and be in the ensemble of their production of the play, “The Skin Of Our Teeth.” The play was directed by Tony Award-winning Playwright David Auburn and featured actors that ranged from established performers (like Tony Award winner Harriet Harris) to non-equity student actors (like myself!). Every single day with that cast, from the first rehearsal to the last show day, was an amazing learning experience that greatly intensified my passion for this art form. Observing the creative processes of people like Harriet Harris was so incredible because I learned how much work people put in behind the scenes to produce the memorable performances that they do. Every day she would come into rehearsal with thoughtful questions for the director about the play. Even during the run of the show, she spent at least an hour before every show in her dressing room analyzing the script.

Watching her dedication to her craft was inspiring; I took every opportunity that presented itself to hear her talk about her experience in the field and to hear any advice she had to give. Every week we were also involved in the strike or set up of the set for another production, parking duty, community service projects, and attending shows put on by other theatres in the area to get a well-rounded perspective on all the different parts contribute to a successful theater company.

The summer ended with a production of, “You’re A Good Man, Charlie Brown,” put on by the full intern company in which I played Charlie Brown. Throughout the 11 weeks, I was able to create strong relationships with performers of all kinds and learn about the multitude of ways they in which each ended up where they are. Overall, it was a truly transformative time for me. From learning how difficult yet fulfilling a life in the arts can be to learning what necessities I need while away from all my family and friends to put forth my best work consistently as an artist every day. 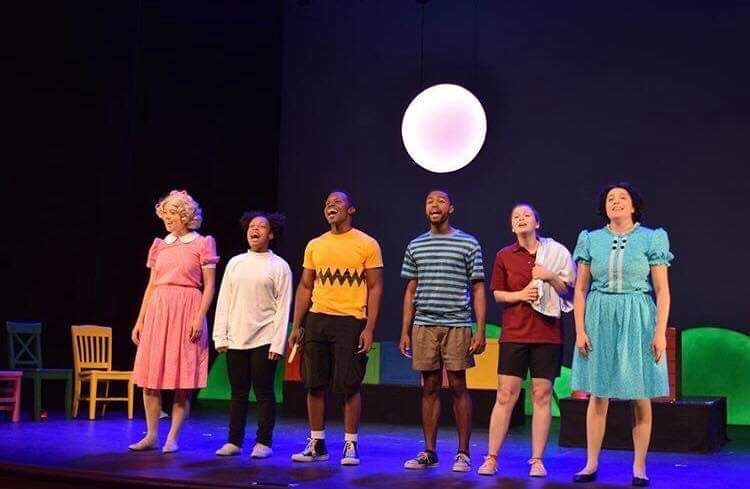 This past summer for me was spent half in Guatemala and half in New York City — doing theater in both places, but of vastly different types.

Guatemala was a wonderful experience that managed to unify my two majors, Theater and Spanish. While I was there I served as the ASM for Romi Moors (class of ’18) in the production of La Traviatta, put on by a theater company called El Querido Arte. Because the opera scene is not as huge as it is in other countries, El Querido Arte is a relatively small company which performs at the National Theater of Guatemala, and the president came to a performance! Working with El Querido Arte was amazing because not only did I get the chance to meet and work with artists from all over the world, but I also met many artists from Guatemala City itself. My favorite memory from Guatemala was another project a few of our opera singers were working on, something called “Opera En Tu Mercado,” in which they would essentially plan a brief performance with excerpts of La Traviatta at the mercados around Guatemala City. This was such a wonderful experience because I truly got to see how much the theater and work we are doing brings joy to those who consume it, whether they buy tickets or are happily surprised while buying groceries.
The rest of my summer was spent in New York City, interning at the New Ohio Theatre as part of their Ice Factory summer internship. I worked along 8 other interns, all around my age, and we were taught the ins and outs of the theater space and tasked with keeping it clean and running while various theater companies occupied it. In addition, we helped run the visiting shows, either as board ops, wardrobe, other deck crew jobs, or front of house management and box office/concessions work.

Working with 7 different theater companies over 7 weeks meant that I met a lot of people (several who asked me if I was blue side or red side upon hearing I attend Skidmore), but I think the best part of it was having access to new shows that were more often than not created by marginalized artists because that’s what they wanted to be making, not because they had been asked to. Each week was vastly different — a new opera, a straight play, a musical, a collection of songs, a spoken philosophical essay. Literally whatever the artists wanted to put up, we would help them put up. I really think that working with these companies opened my eyes to the endless possibilities of what theater can be: whatever I want it to. 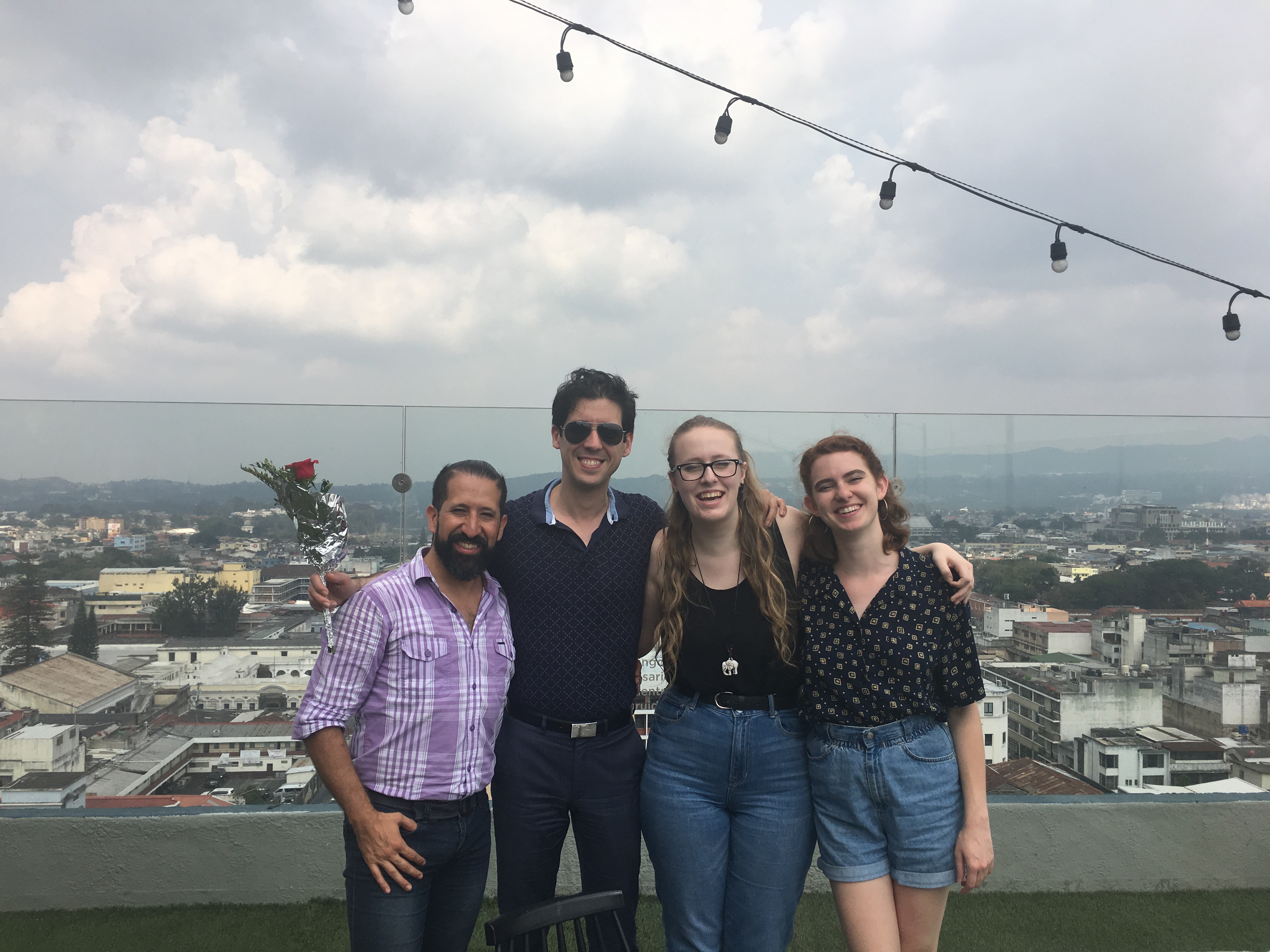 Curated and edited by co-editors-in-chief of STLN Audrey Erickson ’20 and Em Miller ’20.