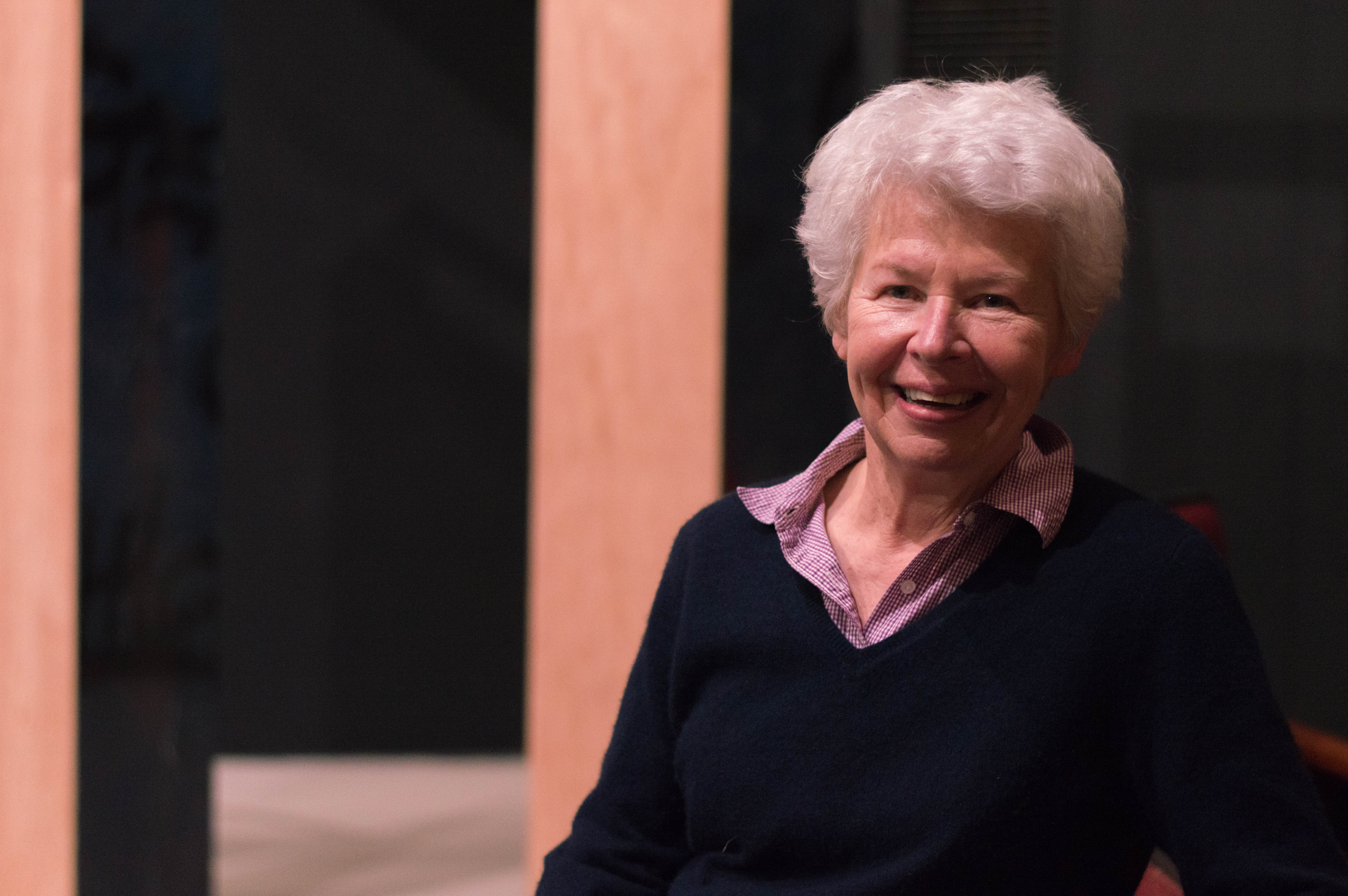 Carolyn Anderson’s interest in theater began like many of us: by seeing plays. She tells me, “When I was young, I lived very close to NYC. My mother loved plays, so I started seeing theater at a very young age. It was something I always found to be captivating; I enjoyed the illusion of it.” Now in her 40th and final year as a professor and director at Skidmore Theater, Anderson is well known for two things in particular to students and faculty alike: the exquisite sense of detail in her work and her extremely welcoming heart.

After seeing The Threepenny Opera as a young woman, Anderson first felt inspired to pursue theater. “It was the first musical play I saw that I can remember. I loved the energy of it, Kurt Weill’s music, and Brecht’s characters.” Anderson emphasized the scale of Brecht’s characters who are “larger than life. It was much bigger than anything you could see on TV.”

Before Anderson came to Skidmore, she had a small theater company in Rensselaer County during the mid-70’s: the Rensselaer County Theatre Project. Commissioned by the Rensselaer County Legislature, the purpose of the company was to make street theater. “We would come up with plays that celebrated the various neighborhoods in the city of Troy.”  Prior to the the Rensselaer County Theatre Project, Anderson did not have experience with street theater beyond the point of view of a spectator. One aspect that particularly surprised Anderson in this work was the intense fervor of audience participation she encountered. Anderson specifically recalls various pockets of Troy that were dealing with absentee landlords, “I devised plays with my company to address these political issues. The neighbors were very pleased, the absentee landlords were not, the police department was not—but after a while they just left us alone,” she laughs. Anderson notes this as the moment where she became interested in creating political theater. In addition to her work with Rensselaer County Theatre Project, Anderson also served as executive director of the regional arts council, Albany League of Arts, and taught at the Emma Willard School in Troy. It was during her time teaching at Emma Willard that Anderson came into contact with Alan Brody, who was then Chair of the Skidmore Theater Department. “He [Brody] had seen and liked a lot the work I had done, so he asked me if I would consider teaching part time. Later on, he asked if I wanted to teach full time. I enjoyed the students so much, I told my board of directors that I was going to take a full time job at Skidmore.”

Anderson has been with Skidmore since the early 80’s and has seen everything from the theater department’s move from downtown Saratoga to on campus to the opening of the Janet Kinghorn Bernhard Theater. When I ask Anderson about the changes she has witnessed in her 40 years here, she says, “The biggest thing that happened to this department was the building of this theater [the JKB]. We were the last department of this college to move on campus up from the old campus—I used to teach downtown.” Anderson comments that though it was Brody who laid the groundwork for the JKB theater, it was herself and colleague Lary Opitz who pushed the construction of the theater forward. She exclaims that the construction of JKB “Was huge for our program—it was so small before! The theater building has helped our department grow significantly over the years. We have a more diverse department then we’ve ever had, in terms of students, faculty, the courses and breadth of material we can offer.” 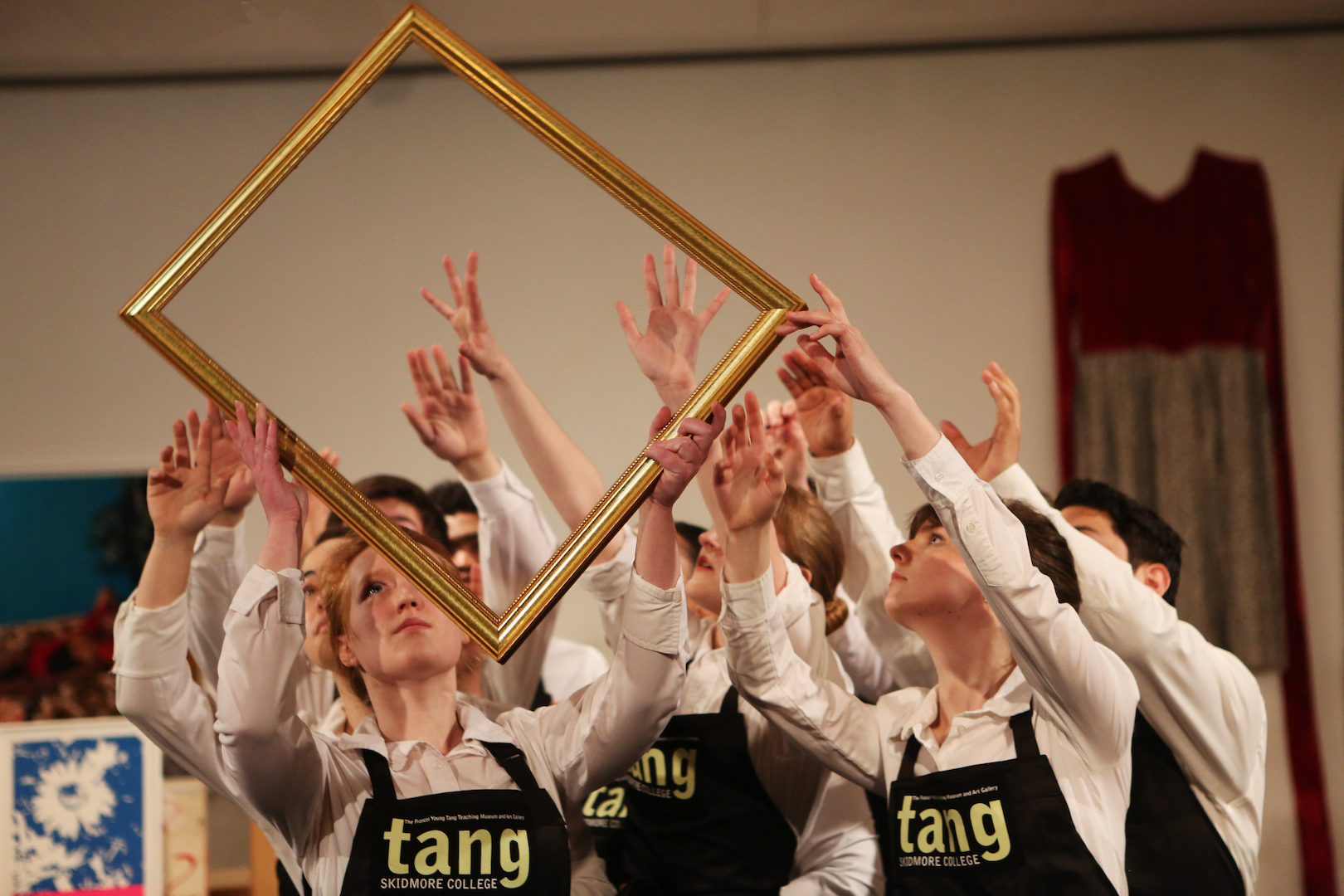 Having been both a witness and a main participant in the development of the theater department, I ask Anderson about some of her favorite projects during her time here. Without hesitating, she responds, “My favorite project is always the thing I’m working on.” Anderson’s latest piece, Off The Shelf, took place earlier this spring inside the Frances Young Tang Teaching Museum. In this site-specific piece, Anderson worked to create a piece to showcase the character of the museum’s permanent collection.  This project marks Anderson’s fourth collaboration with The Tang and focuses on some of her central interests as a director. “I like dealing with the architecture in the space,” she says. “It was an absolute exhilaration and a challenge to go behind the scenes of the Tang.” 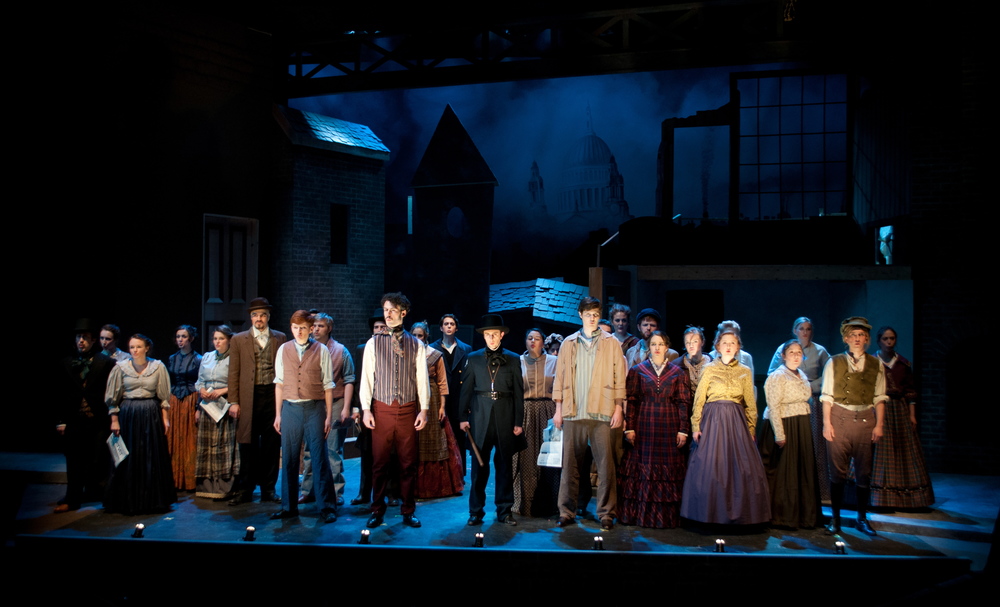 Some of Anderson’s other noteworthy recent Skidmore credits include the 2015 production of Blood Wedding, which she co-directed with Will Bond (who is also leaving his teaching position this year), the 2013 production of Sweeney Todd, two other collaborations with the Tang and Gary Wilson: Becketshorts in 2010 and American Collision(s) in 2014, and, just last year, her production of Chuck Mee’s Big Love. 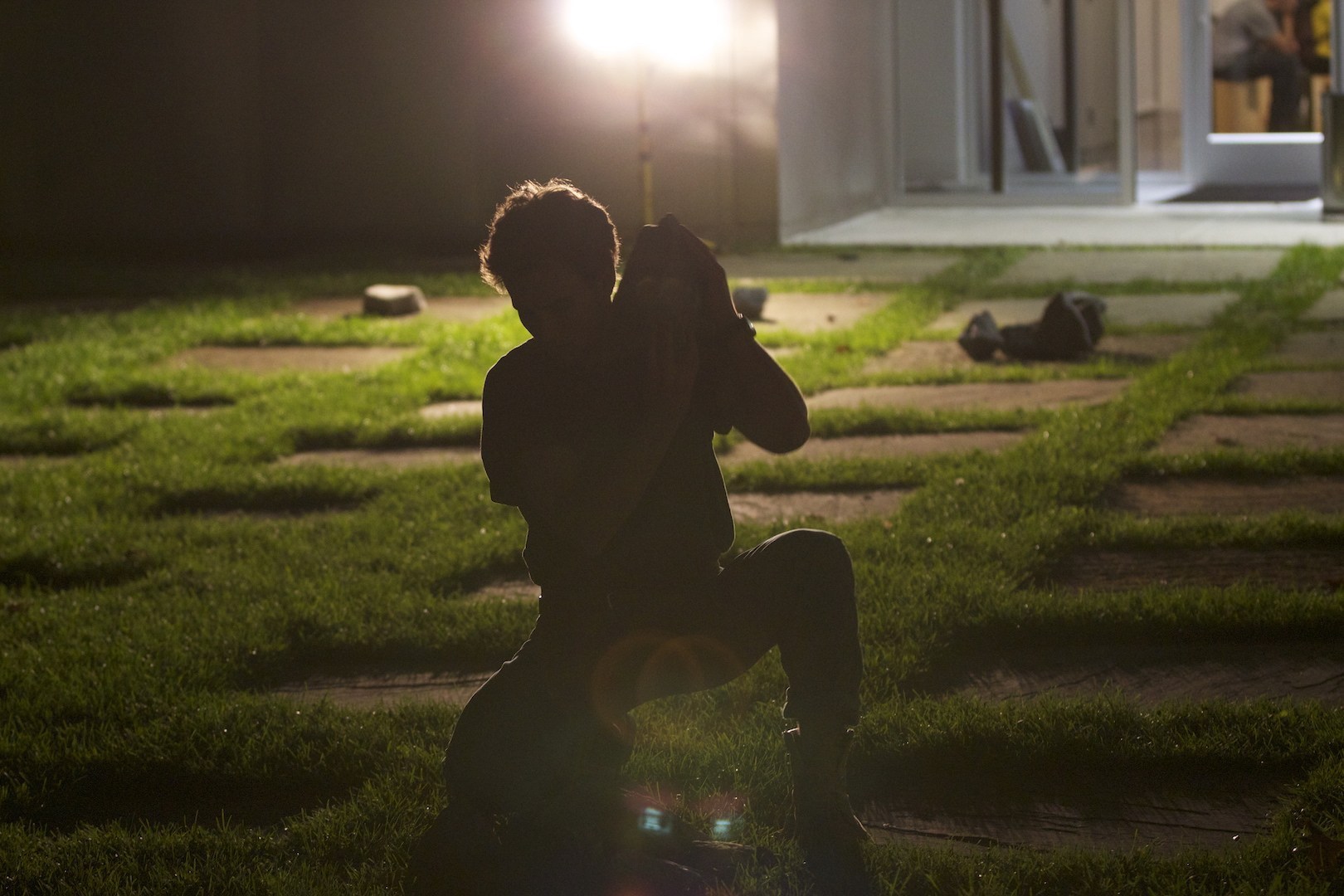 I ask Anderson what she will remember most about her time at Skidmore. For a moment she ponders, and then she says, “One of the things about doing theater in a college setting is the chance you get to do a huge variety of work.  You don’t always have the opportunity to do Brecht, Naomi Iizuka, Chekhov, Ibsen, and Sarah Ruhl,” Anderson lists off playwrights like she is reciting the alphabet.  “Where else would I have the opportunity to direct all these wonderful plays? It’s quite remarkable; I’m really grateful. Being at Skidmore has been an absolute gift.” Anderson continues, reflecting on the various production processes she’s experienced during her time at Skidmore. She carries a particular fondness for her collaborations, with students and colleagues alike, “You don’t ever lose memory of those things [collaborations].  Each production has been very special in its own way.” Anderson also makes special note of the Theater Department’s relationship with the rest of campus. “Our relationship with the rest of the college is very important, and central to our department. Theater is an art about curiosity about the world. The humanities give us the soul of what we do.”

When I thank Anderson for her time, she smiles. She looks around her office: her bookshelves are overflowing, the sun is shining in through her office window, we can hear the bustling voices of her colleagues flow into the room as I open door, and she simply responds, “It’s a joy to be here.” 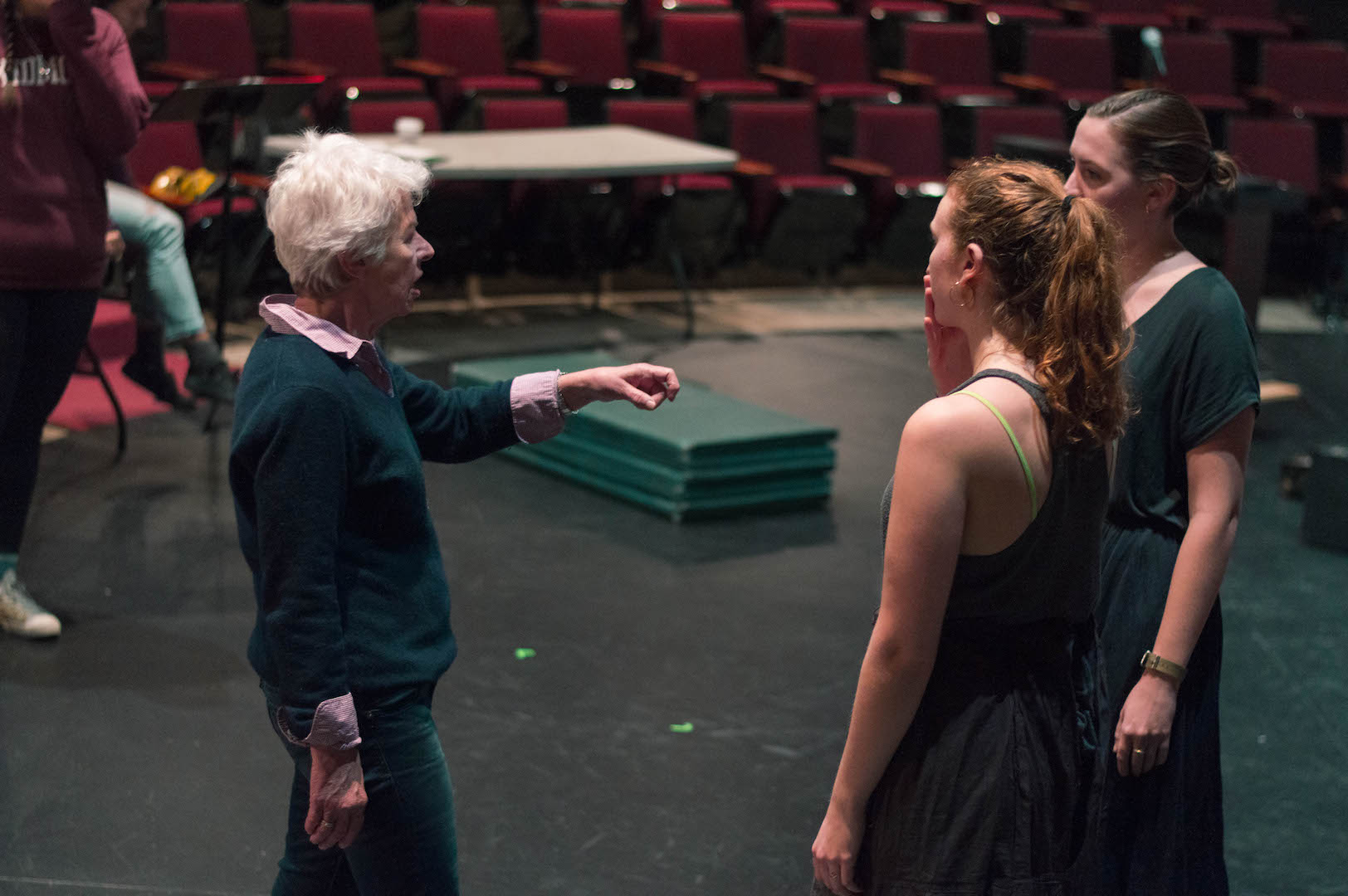 “It is truly so difficult to only use a few sentences to describe the gigantic impact Carolyn had on me as a teacher, mentor, and role model. She intuitively understands how to strike the perfect balance between challenging and supporting her students. She constantly helped and pushed me to continue to refine and then redefine my tastes and skill-set as a collaborator and director.  But if I really had to distill down the thing I love, admire, and respect most about Carolyn is how she always leads, both in the classroom and the rehearsal hall, with kindness and generosity. The care with which she treats everyone around her is something I always try to channel. When I first began directing I often found myself worrying that the attempt to make everyone feel heard in the room might be interpreted as weakness or indecision but Carolyn demonstrated every day that it actually conveys true strength.” -Rebecca Rovezzi, Class of 2018; assistant director to Carolyn in Big Love

“Carolyn is an engaging and compassionate director. She openly invests emotional energy into each small component of a show––so much so that her physicality and expression shift to echo moments that resonate with her. In rehearsal Carolyn is candid, tireless, and just as open to collaborative ideas as she is dedicated to a focused agenda.” -Yael Schoenbaum, Class of 2021; actor in Big Love and Off the Shelf
“Having the chance to work with Carolyn both as an actor, then later as her associate director, taught me how to work not only productively and collaboratively, but also with great empathy. Carolyn puts together a rehearsal room that makes everyone in it feel valued, and listened to and cared for. Carolyn Anderson is the kind of director that makes everyone around her better. I’ve also seen how how she can make students want to work, to strive to become better theater makers. What Carolyn brings to a rehearsal room is incredible, what she brings to a classroom is incomparable.” -Nick Leonard, Class of 2020; actor in Big Love and associate director to Carolyn in Off the Shelf

Nina Slowinski is a senior staff writer for the Living Newsletter.