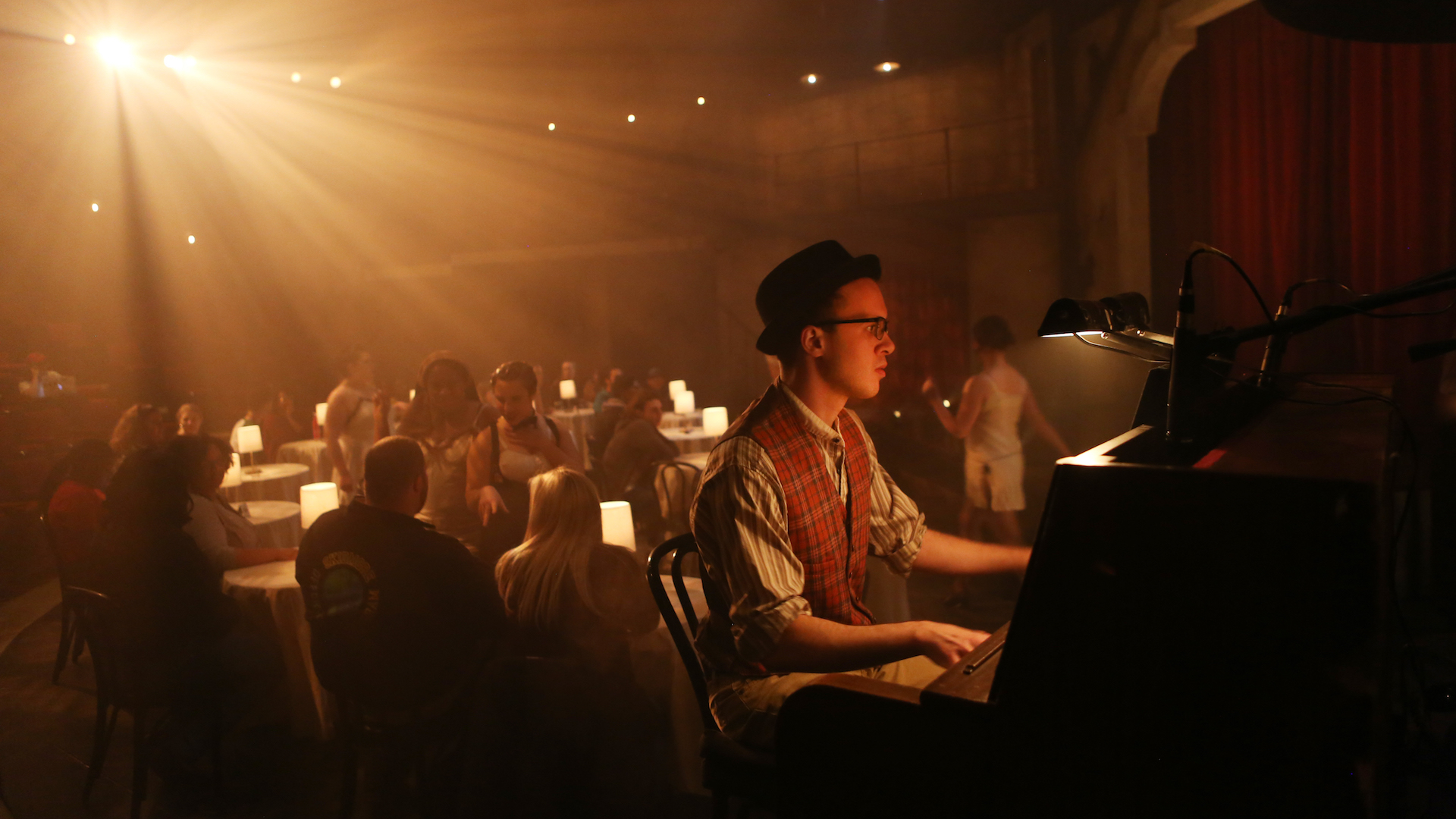 While Cabaret was still running, STLN staff writer Max LoSardo ’20 spoke with the production’s musical director and pianist, guest artist Casey Reed. Read their conversation below as we look back and celebrate the end of the semester!

ML: How did you and John meet?

CR: This was one of those recommendation of a recommendation situations. It was through Gary I was hired. I actually didn’t know John and I were at Northwestern at the same time. I was an undergrad and he was an MFA student, so we overlapped for one year.  I remember at our first meeting I was like: okay this is gonna be good! It was one of the best director and musical director collaborations I’ve ever had.

ML: Were you in agreement for what the image of the play should be?

CR: Yeah. I trusted John with a lot of that.  We both left our egos at the door.

CR: Yeah and he would give music notes, and I sometimes would say “hey, this line isn’t landing” which he was fine with. So there was a lot of cross-pollination happening, which is important.

ML: I know a big thing was changing the way the song “Tomorrow Belongs To Me” was delivered.

CR: Right. It’s usually a recording of a creepy little boy singing a Nazi song.  We didn’t want a recording. We thought it would take us out of the world. We wanted the ensemble to sing it.  We felt that it’s just more effective when its sung by real people in the space.  So I went with this beautiful pretty choral arrangement I thought would be haunting because of the contrast between the material and the sound, and it just wasn’t working and so in tech we totally changed it.

ML: Did it just come out differently during tech than you guys wanted it to?

CR: Yeah. I said cut all the harmony, everyone sang in their lowest octave, then I just added a bunch of tritones and a piano accompaniment.

ML: Tell me about your experience working with the Story Pirates.

CR: So it’s a group of improvisers and accompanists in New York City and Los Angeles. I’m in the New York company. We get dozens of stories written by kids submitted every week; we adapt them into shows and we tour them out in schools.  A typical Story Pirates show will have eight different stories or so and one create-a-story where, with the audience, we sort of teach them what’s a story arc and what’s a strong character. So my job as an accompanist in the New York City company is to constantly underscore the entire show, like it’s a 1920s silent movie kind of thing.  It’s so much fun. It’s probably my favorite thing I do. It’s definitely the most important thing I do. I’m excited to get back to that.

ML: Do you want to teach eventually?

CR: You know, I don’t have the patience to teach high school or lower, I’ve learned that about myself.  I push people hard. I hope in a kind way. Being here it’s the first time I realized I would totally like to work at a university someday.  I just love this environment and the talent here is close to professional. It’s a steady year-round job if you can get it. You have a lot more resources here than you might in a professional production, depending on the size.  I do like teaching a lot, which is why I’m a music director. I would love to be a resident music director at a university. There was one at my college who was a big influence on me.  Right now the plan is keep getting that real world experience and then maybe go to grad school, and then maybe try to get a university job or go back to what I’m doing right now.