Skidmore students have many opportunities to experience new ways of thinking about theater thanks to visiting artists that come to campus every semester and hold workshops that allow students to collaborate and expand their understanding of art. As we look ahead to the exciting experiences this semester holds, let us also look back on previous events that had students excited and creating! 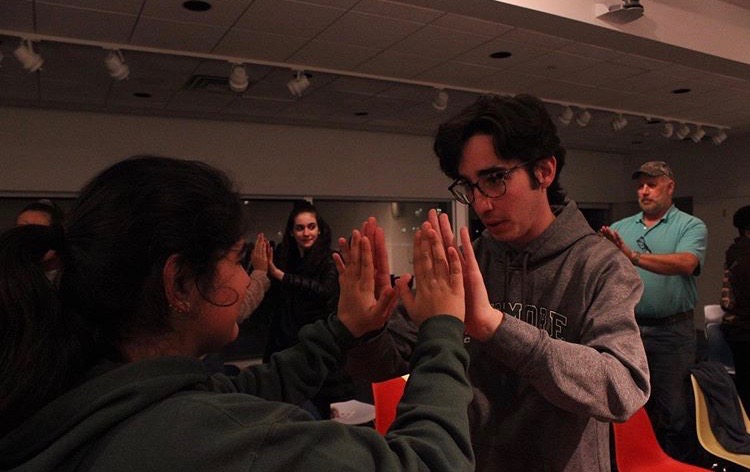 Street dance activism. Walking into Dr. Shamell Bell’s workshop this past Wednesday, I wasn’t exactly sure what I would be a part of, nor did I realize the positive impact that the event would have on my mental state…

Dr. Bell begins all of her workshops and classes with a check in, ensuring the participants that we were in a safe space and could share with each other freely. Once check-in was completed, the group stood in a circle to begin the movement section of the day. We went around the circle to introduce ourselves, with an emphasis on being able to pronounce and recognize everyone’s names and on knowing one another’s correct pronouns. As we introduced ourselves, we demonstrated a dance step that would later be used in our group dance. We learned every person’s dance step in the circle, and then combined them to make a little routine once everyone had finished introducing themselves. Dr. Bell then divided us into two groups to make our dances — this entailed coming up with a group name, what cause we were dancing for, and creating a dance piece that incorporated five of the dance moves from the circle. 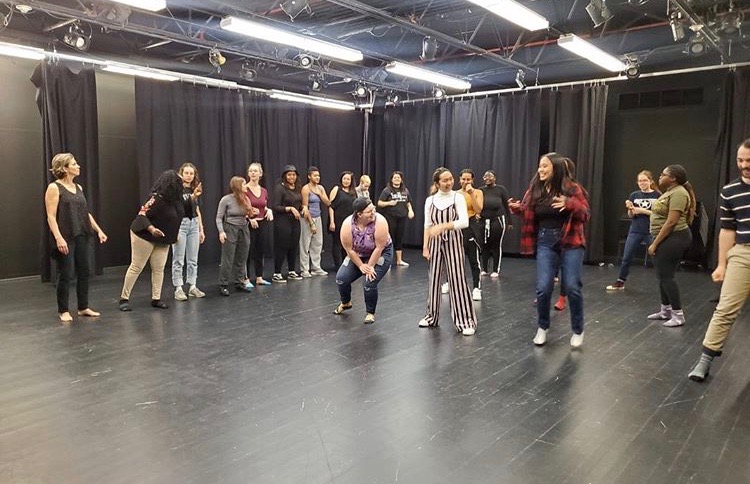 Skidmore Students work together to start dialogue through dance.

This space was encouraging, safe, and allowed for us to be completely uninhibited. We were challenged to be unconditionally ourselves, to express radical joy. The support in the room was unmatched; when one group wasn’t performing, they were enthusiastically hyping up the performing group, cheering them on and dancing along (check out the JKB Instagram for clip of the dances!). I’ve never felt that level of love and respect in a room of people who barely know each other. After both groups performed, we once again sat in a circle with Shamell and her son Sajani as both of them led us in an affirmation exercise. We were instructed to write down as many affirmations for ourselves that we could think of, and then proceeded in, as Dr. Bell would say “We Will Rock You” style, to recite our affirmations as quickly as we could around in a circle until we ran out of phrases to say. It was inspiring to hear the positive things that everyone had to say about themselves and what inspired them to cast away anxieties to promote a happier and healthier mental state. When Sajani spoke on his affirmations, I was in awe of the maturity and positivity that I saw in such a young kid- it was captivating. 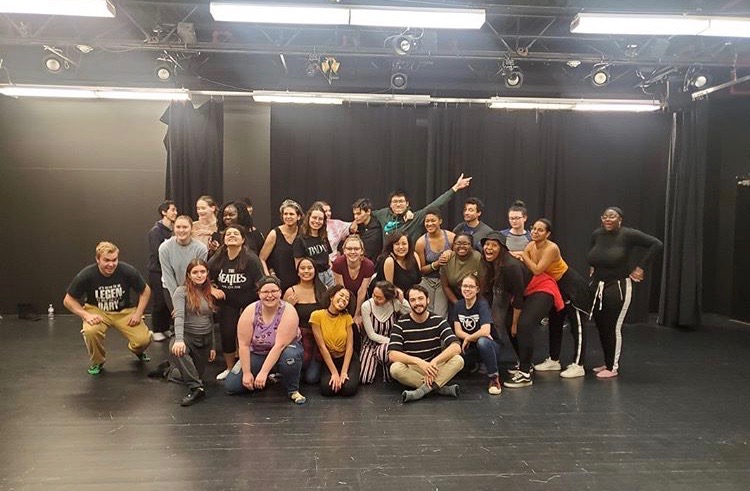 We ended the workshop with a check out, sharing our feelings after the experience. It was extremely evident that everyone’s mindset had been changed for the better. Each person in the circle was so grateful for Dr. Bell and the opportunity to participate in the event. People spoke on how this helped them find methods to cope with depression and anxiety, rejuvenated them after a difficult day or week, and motivated them to create more of their own work. I am so thankful to have been a part of such an eye-opening and heart-warming experience, and I hope to someday soon be able to participate in something similar again. 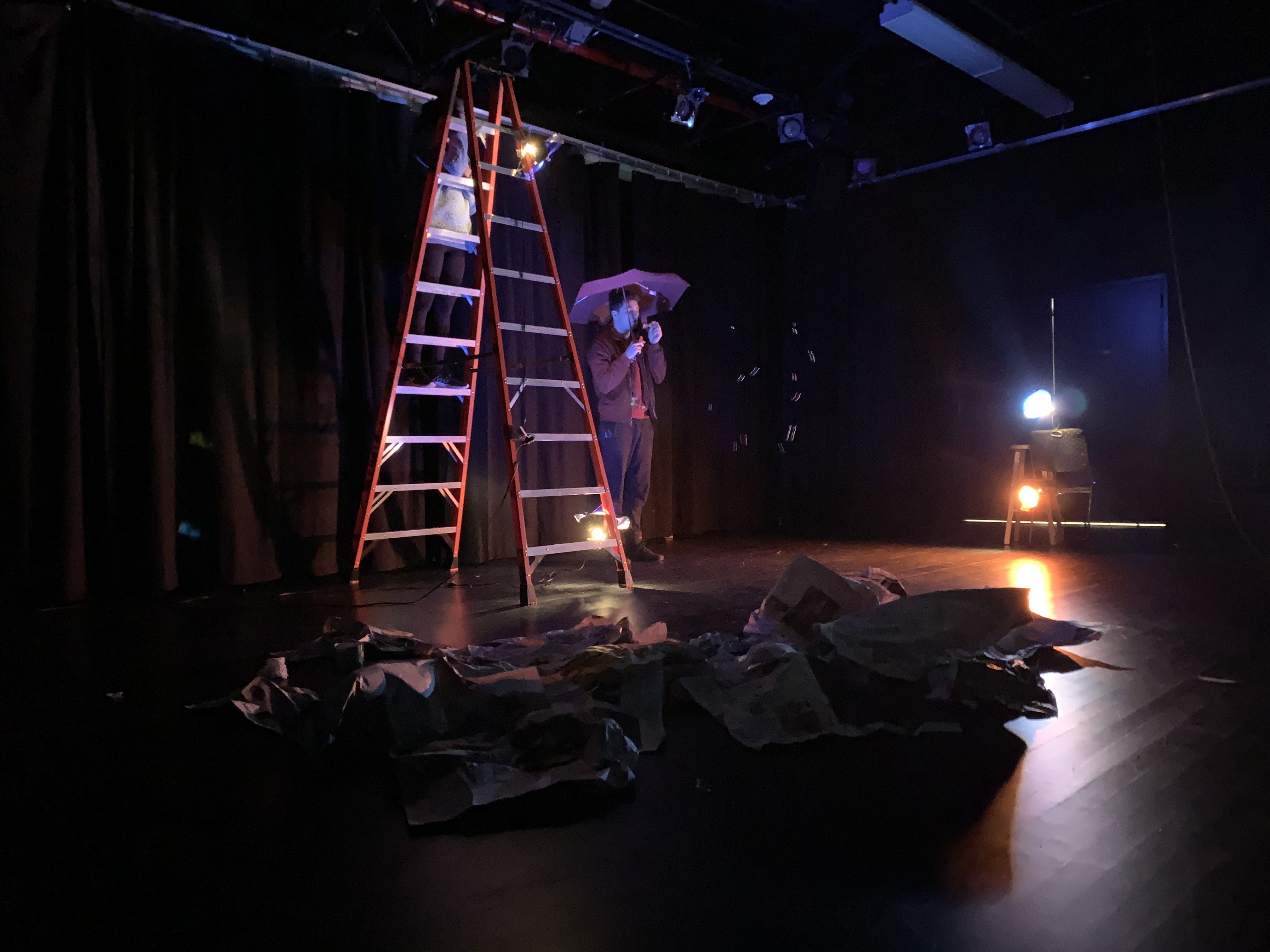 Spencer Evett ’21 prepares for the start of a piece devised over the course of the two-weekend long workshop.

On October 26th, students took part in a workshop taught by Grant Varjas of the Tectonic Theater Project to learn this New York-based company’s style of devising theater, called “moment work.” The two-weekend intensive workshop illuminated the values of the Tectonic Theater company and applied them to real-time theater making as students collaborated to make “moments” both individually and as an ensemble.

Founded in 1991, Tectonic Theater Project is best known for producing pieces like The Laramie Project and the Pulitzer prize-winning I am My Own Wife. Tectonic is also responsible for the Tony-winning 33 Variations, which was presented at Skidmore in the Fall of 2018, directed by Marie Glotzbach.

The workshop commenced with what Varjas explained to students as “the beautiful circle.” The ideology behind “the perfect circle” is that everyone starts each rehearsal by using everyone’s bodies to make something beautiful together, where everyone can be seen but is connected to something larger than the individual. This is a practice that is employed by Tectonic at the beginning of their projects that reflects the values of the company: collaboration and creation. 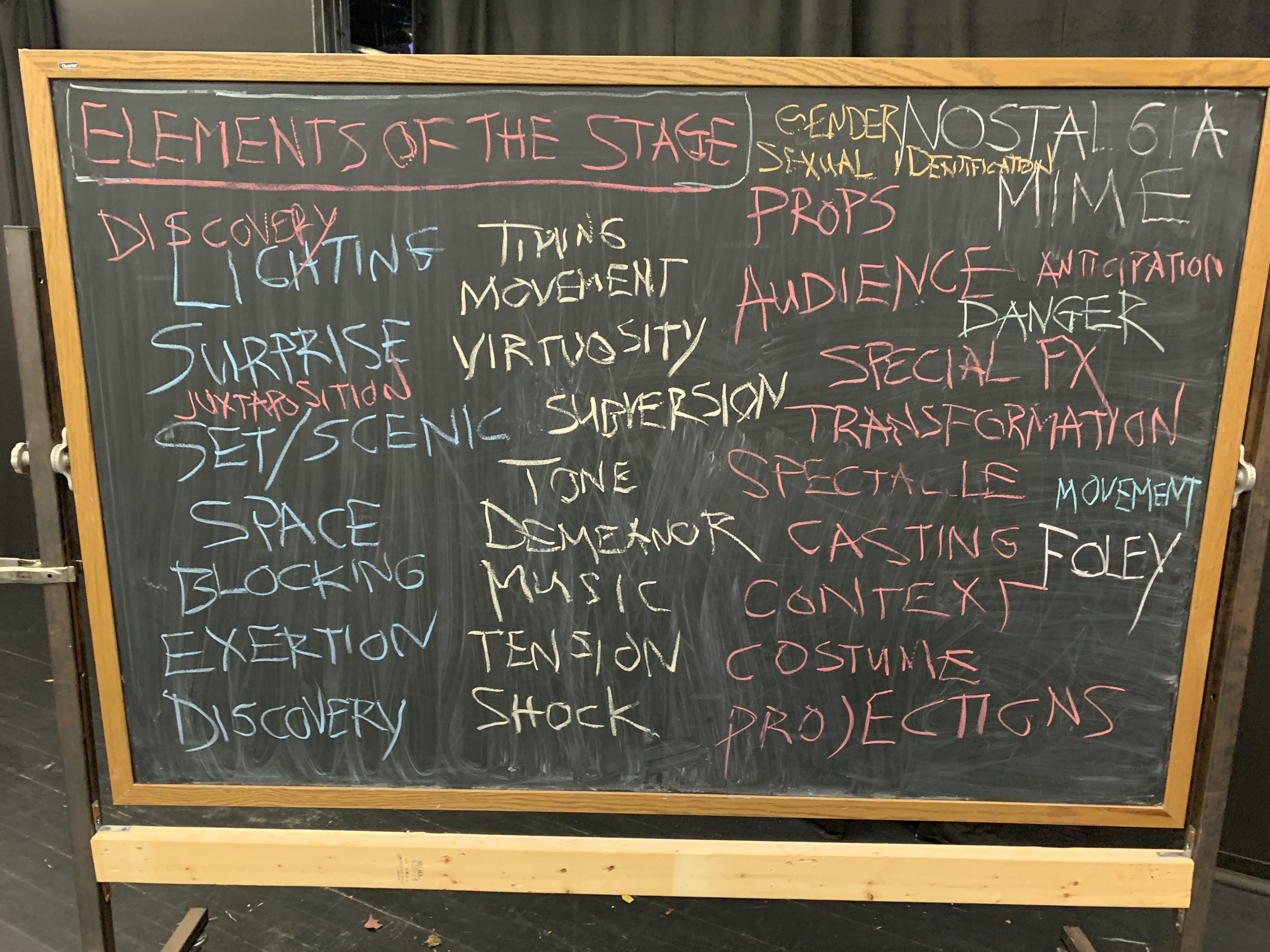 Just some of the elements of theater as brainstormed by Grant and Skidmore students alike.

The two-weekend workshop taught students the principles of creating theater with moment work and the larger ideas behind the practice. On the first weekend, Varjas prompted students to consider the various elements of the stage, or different qualities that go into making a piece of theater. These elements varied from what might be thought of as more “traditional,” such as lighting, while other were more unexpected, like the elements of subversion and virtuosity. 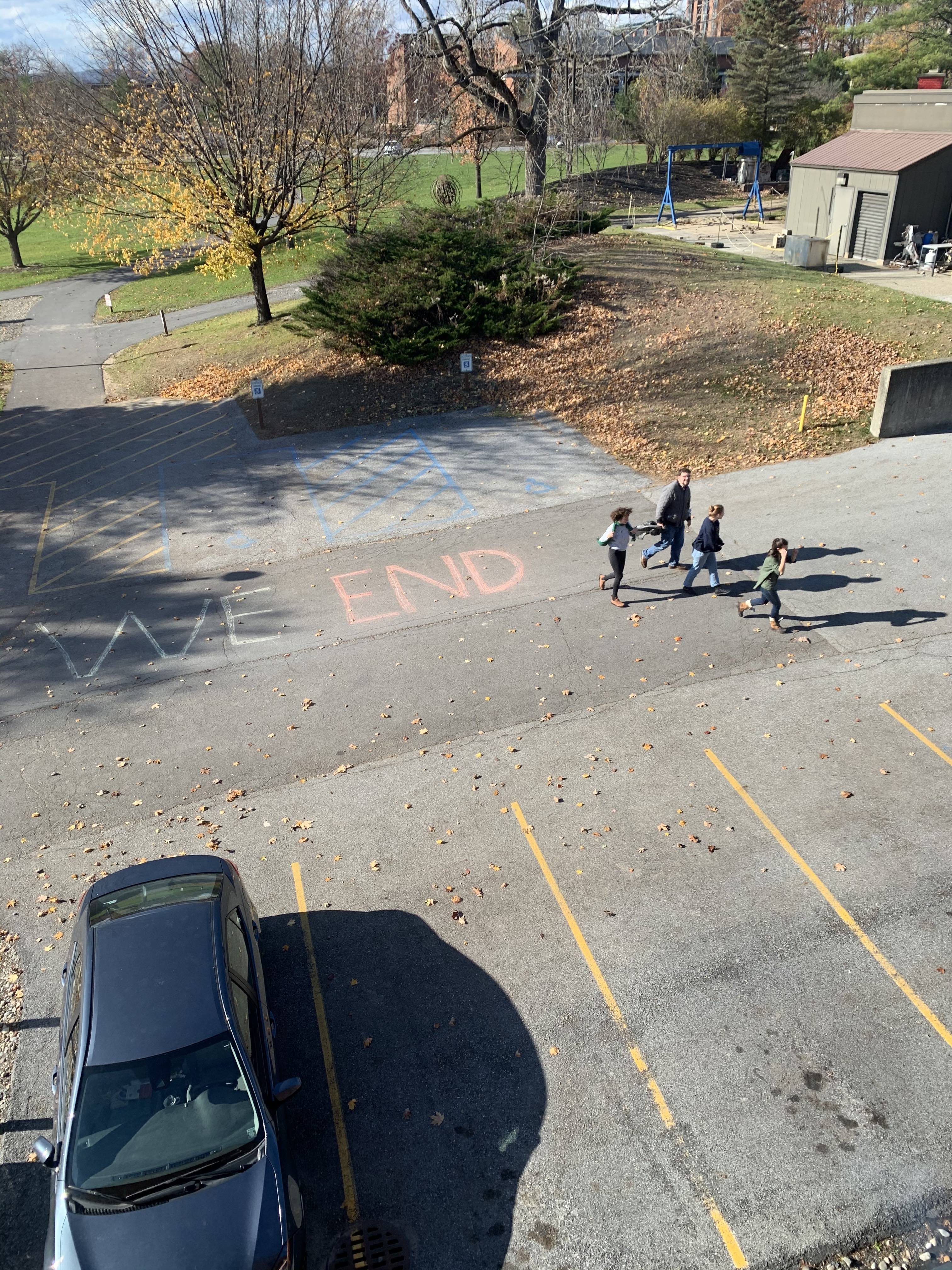 The pieces devised in the workshop stretched the expected bounds of theater, including the piece above, which took us out of the theater.

Once Varjas and workshop participants developed a working list of elements, the group started working—both individually and collaboratively— to use these elements as centerpieces for different moments. A pillar of moment work is that artists value equally all elements of theater, and as such all elements are incorporated into devising from the beginning. This ensures that all elements are equally valued, whereas in other more traditional modes of creating a piece, the text takes priority. By focusing on moments around light or set, students were able to make pieces that pushed them creatively and allowed them to tell innovative stories. 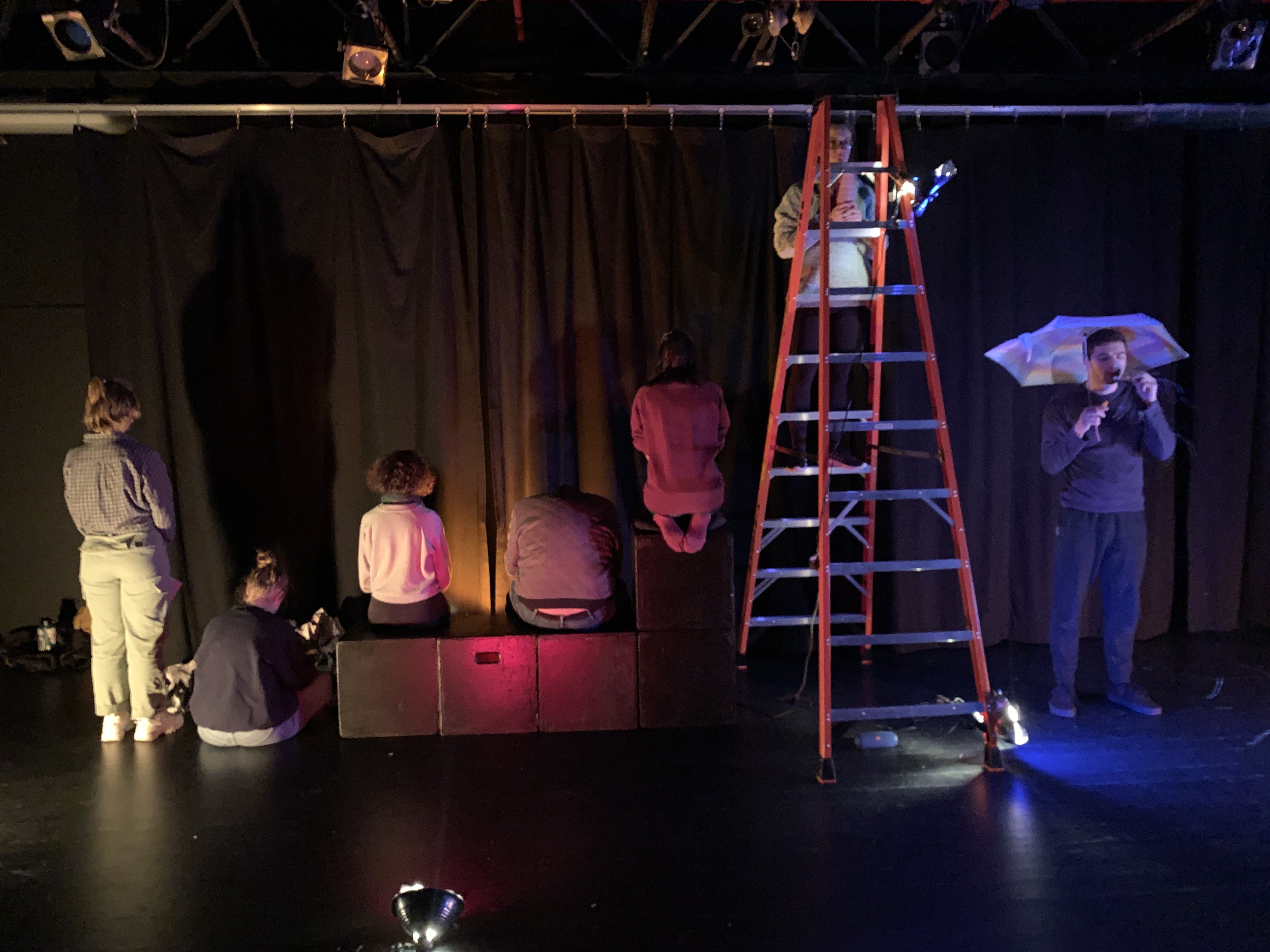 Once students got a taste of how moments were made, they worked with Varjas the next weekend on creating moments based on “hunches,” which is the vocabulary used by Tectonic to describe the story they want to tell or ideas they want to explore while devising a new piece. Students came to the workshop with a variety of hunches, from climate change to the impact of opioids on the American family. This provided a framework through which students could continue making moments while also working together to create stories on topics that interested them personally. By the end of the workshop Varjas had helped students create many exciting moments together and had us all thinking about creating theater through a new lens.

This was not Varjas’ first experience working with Skidmore students, as he visited during the 33 Variations rehearsal process to introduce moment work to the cast. This collaboration was a success, as not only did Varjas come back to teach more moment work to Skidmore students, but two students who worked on the Fall black box production, Hannah Curtis ’20 and Spencer Evett ’21, were intrigued enough to join in on the workshop to learn more about the way in which plays like 33 Variations are created. Evett says of his experience applying moment work to 33 Variations: “it really helped me as an actor to explore the scenes in different ways… and I learned a lot about the characters in the play. I was really curious about how [moment work] is actually used by Tectonic for devising theater… I think moment work has a lot of value for both devising and rehearsing plays.” Spencer speaks to the value of incredible opportunities like this workshop, where students can learn about a wide variety of types of theater and work with professionals in the industry. Hope to see you back on campus soon, Tectonic!