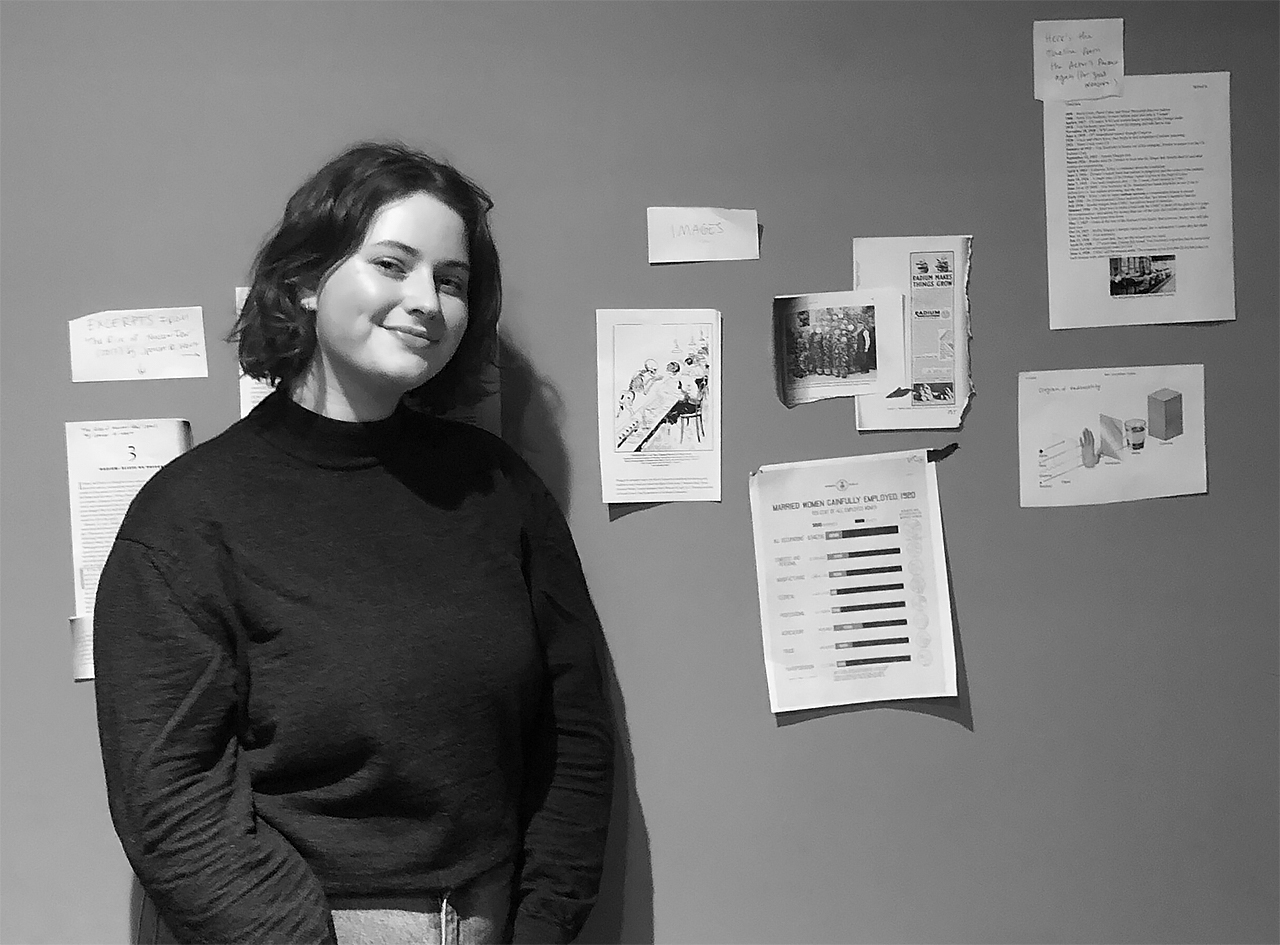 Dramaturg Coco McNeil with her board of references. Photo by Hanna Yurfest.

On the outset, the Radium Girls couldn’t seem more glamorous. By day, they may have been dial painters, but by night, they were women of society, brightening the 1920s streets with their distinctive glow. All thanks to radium, a new miracle cure that made luminous watches all the rage and turned ordinary women into walking phenomena, glowing where they had come into contact with the radium. It’s only when they began to fall ill with a mysterious disease that radium’s true nature and side effects started to show, forcing the U.S. Radium Corporation to cover their tracks.

D.W. Gregory’s play Radium Girls, the Spring 2020 Mainstage production directed by Rebecca Marzalek-Kelly, tells the true story of these women; particularly that of Grace Fryer, who is ready to go to court to defend herself and her friends and stand up for their rights and health. Even now, with the wage gap still alive and well in the workforce, women are more liable to have their health and safety concerns brushed aside. There’s a sad relevance to the Radium Girls’ story, which makes telling it in a truthful and thoughtful way vital. 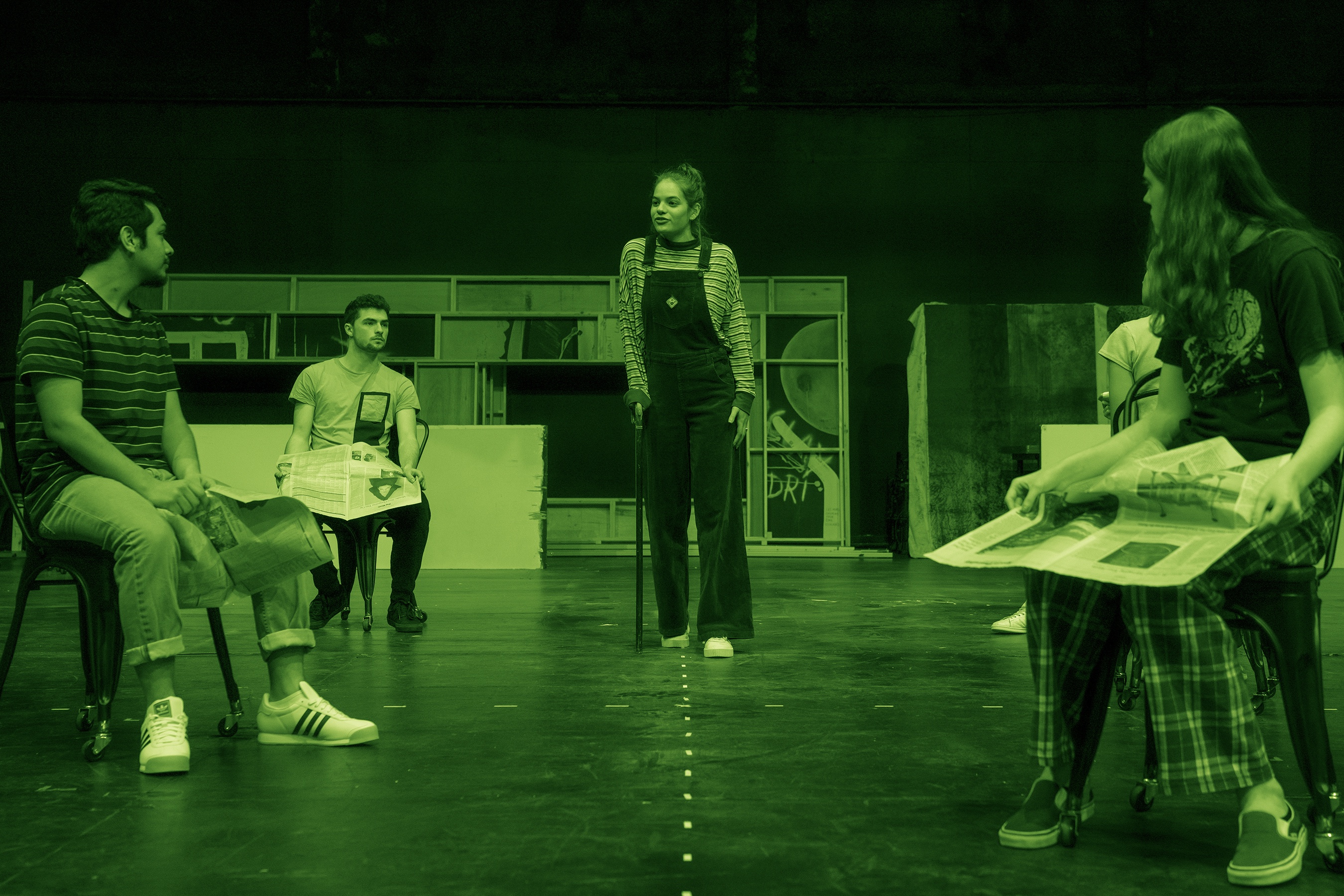 The key party in supporting Rebecca’s vision while keeping the period elements truthful is dramaturg Coco McNeil ’21. She describes her role in Radium Girls as “[being] there in the room with Rebecca, (the director), the designers and also stage management to contextualize the play and support Rebecca’s vision for the play, [as well as] help the actors support her vision through research and other contextualizing material.” Coco, an English major and Theater minor, did not initially know a lot about dramaturgy and its requirements until she took Lisa Jackson-Schebetta’s Production Dramaturgy class, at which point it all clicked: “I think everyone has heard the word ‘dramaturg’ and ‘dramaturgy’ and been like, ‘what the hell does that mean?’ and like, ‘I don’t need to know!’…and everyone has ideas about it, that’s how I totally came into her class. And then, [the class] just got me so excited about it, because it really does feel like the perfect combination of English and history, and theory, and also collaboration and performance, and production, and everything, and I was just like, ‘This is perfect! How had I never known about it before?’ It totally just came together for me in that class.” Coco has proved to be a quick study, and it was soon clear that she would be dramaturg for the Spring Mainstage. Coco says the key to being a helpful dramaturg is “a lot of listening and synthesizing what you’re seeing and hearing… onstage, and also from the other collaborators, and just working them all together to help hone the thing that’s being put on stage– the vision.”

Coco’s role is made a bit more interesting by the fact that playwright D.W. Gregory took liberties to combine characters and shuffle events to create a cohesive narrative for the play, which slightly complicates ideas of  historical accuracy. Circling back to her position as something of a synthesizer for all these moving parts, Coco explains that “…a lot of my work has been reading about the real history and what actually happened to these women and the horrors of it, and all the different characters, the real-life people, and then finding the balance of ‘here’s the history, here’s the play.’ And then in the middle is Rebecca’s production, and how do all three of them come together?” 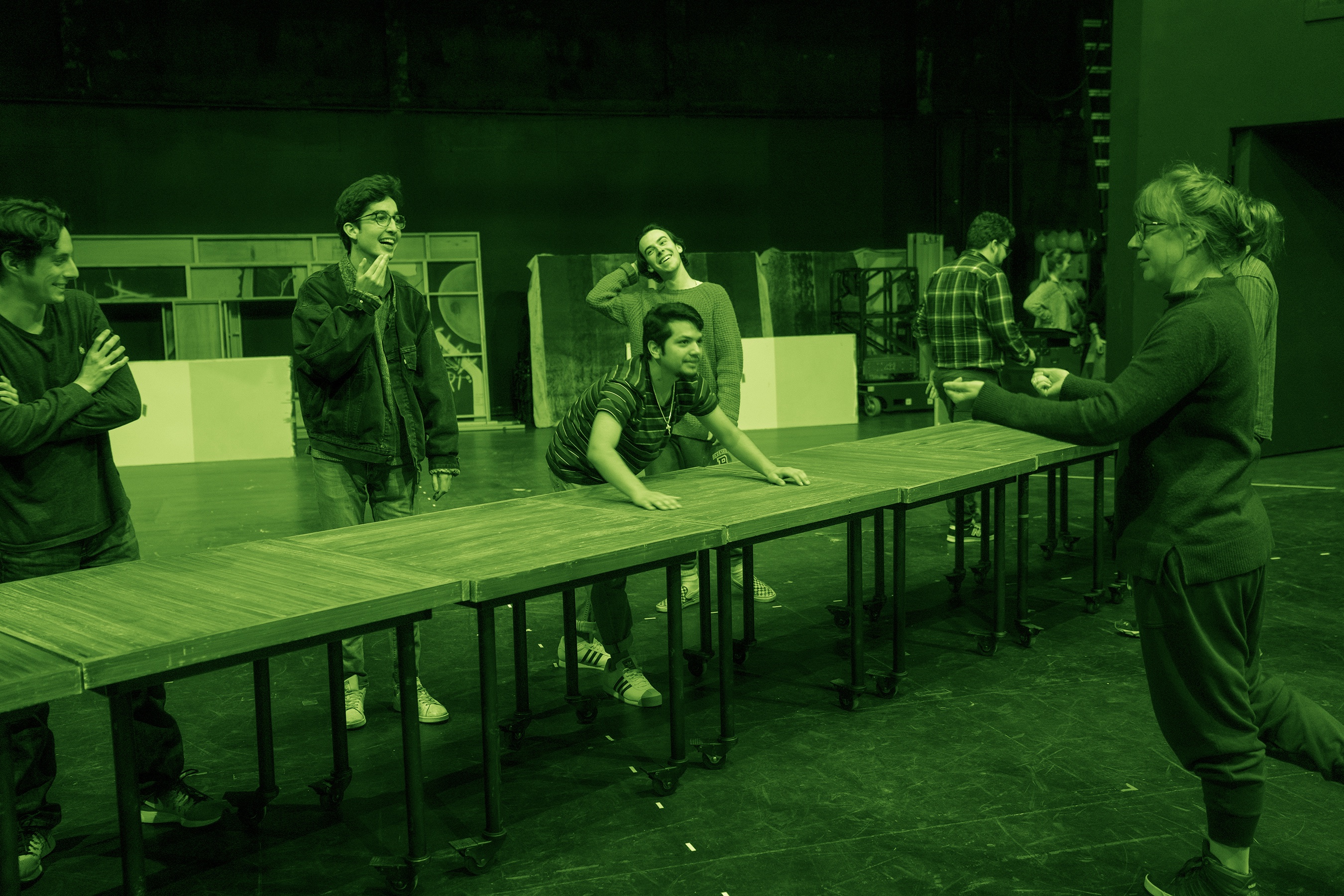 Bridging the gap between the research Coco’s done and the director’s vision is the collaboration with Radium Girls’ various designers. She has worked in close collaboration with people from all the major departments, particularly in regards to prop and costume design. “I’ve been looking at a lot of newspaper articles and clippings from the 1920s,” says Coco, “so I was talking to Jessie [Blackman ’20, the prop designer] about those the other day, and how to find all of [the ones] that are out there.”

One of the most vital areas of period-accurate design comes in the form of costume design. The wardrobe department, led by Patty Pawliczak alongside Bridget Kerr ’20 and Camila Tardif ’22, have been working day and night to capture the look of the ‘20s while also adding in the Radium Girls’ own unique contributions to ‘20s style. Bridget says, “We have had a great time working downstairs with this. It’s fun to work in [this style, and] we’re very much locked into the 1920s. We have a specific look that we have to go for, a silhouette, and these dial painters would’ve had enough money that they could’ve spent some of their paycheck on clothing, and so they are dressed pretty well.” A hurdle they had to jump through was depicting large passages of time with a limited wardrobe for a sizable but not huge cast, most of whom play multiple roles. “In terms of the passage of time,” Bridget says, “we wanted to be able to represent that through costume, but without having everyone have to change their clothes every time it was a new day. Otherwise we would need a wardrobe crew of about 500 people. So we’re playing with sort of small things to make the passage of time and make it clear that things are changing without having to do costume changes every single scene.”

Serious research was done on men’s and women’s fashion at the time, while run through the costume department’s theater-tinged filter. Bridget makes a point to note that “the costumes in the show are a fun mix of things that we’ve created, things that sort of reflect the brightness and the joy that a lot of these women were feeling.” But those women’s clothes also had a special kind of brightness: they glowed due to the radium they were working with. 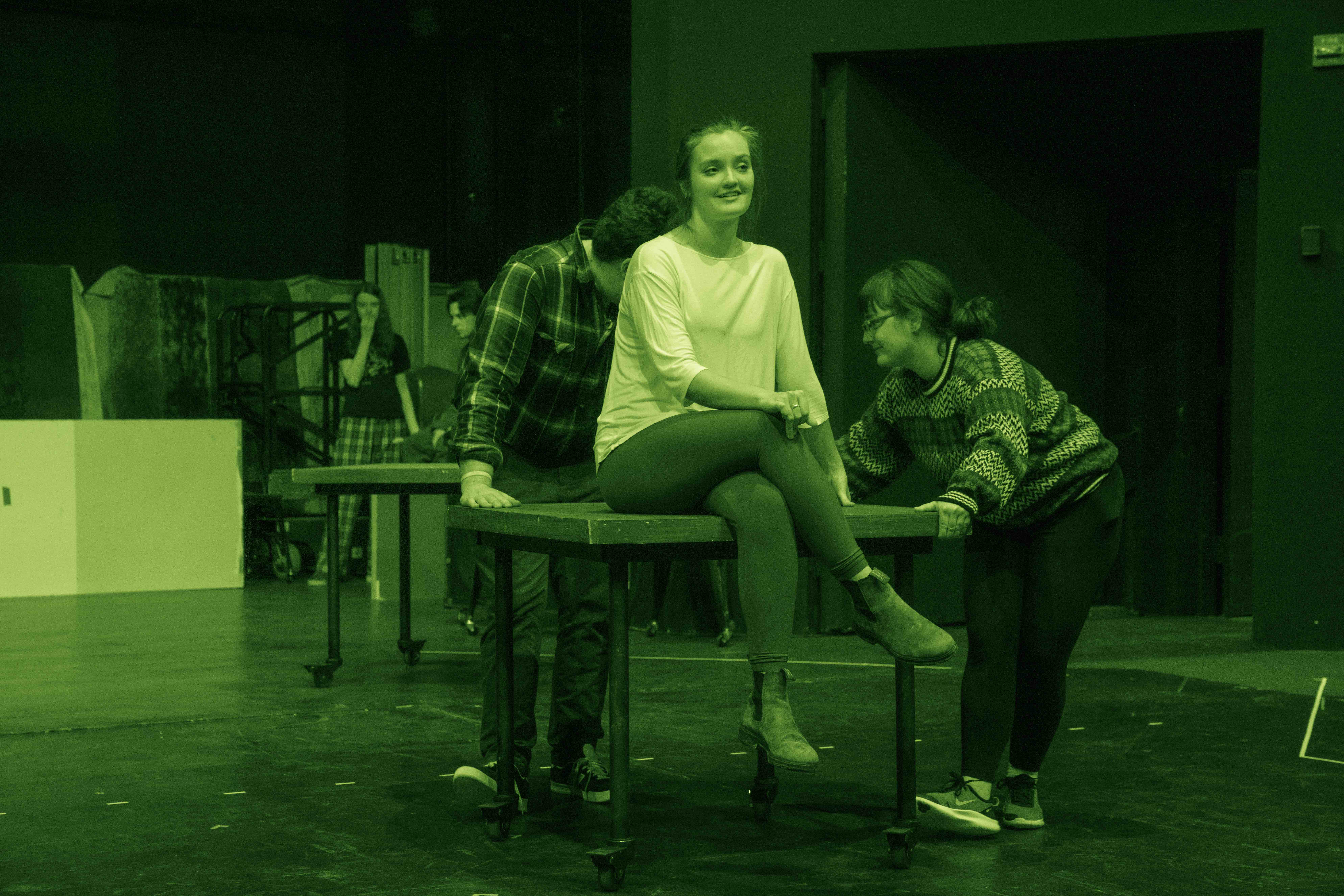 How exactly do you make these outfits glow for real? That was Camila’s department, and she spent a lot of time experimenting with various products and combinations that worked with the costumes. Glow-in-the-dark paint seemed like the logical conclusion, but “it doesn’t shine as bright, and also to activate it you need UV light,” says Camila. While the UV light is indeed a part of the show, Camila needed a way to get it to stick to the clothes and still have the desired effect. Tireless work led her to hit on a combination of the glow-in-the-dark pigment and assorted paint mediums, and voila! Glow-in-the-dark clothes, no radium required.

It’s easy to forget that a period piece requires way more work than just dressing for the time period. The specifics of those costumes and the world the people who wear those costumes live in require a ton of research from both the design departments and the dramaturg. So, when you’re watching Radium Girls, just remember that that glow is more than just skin-deep. It takes a village to light up the JKB. 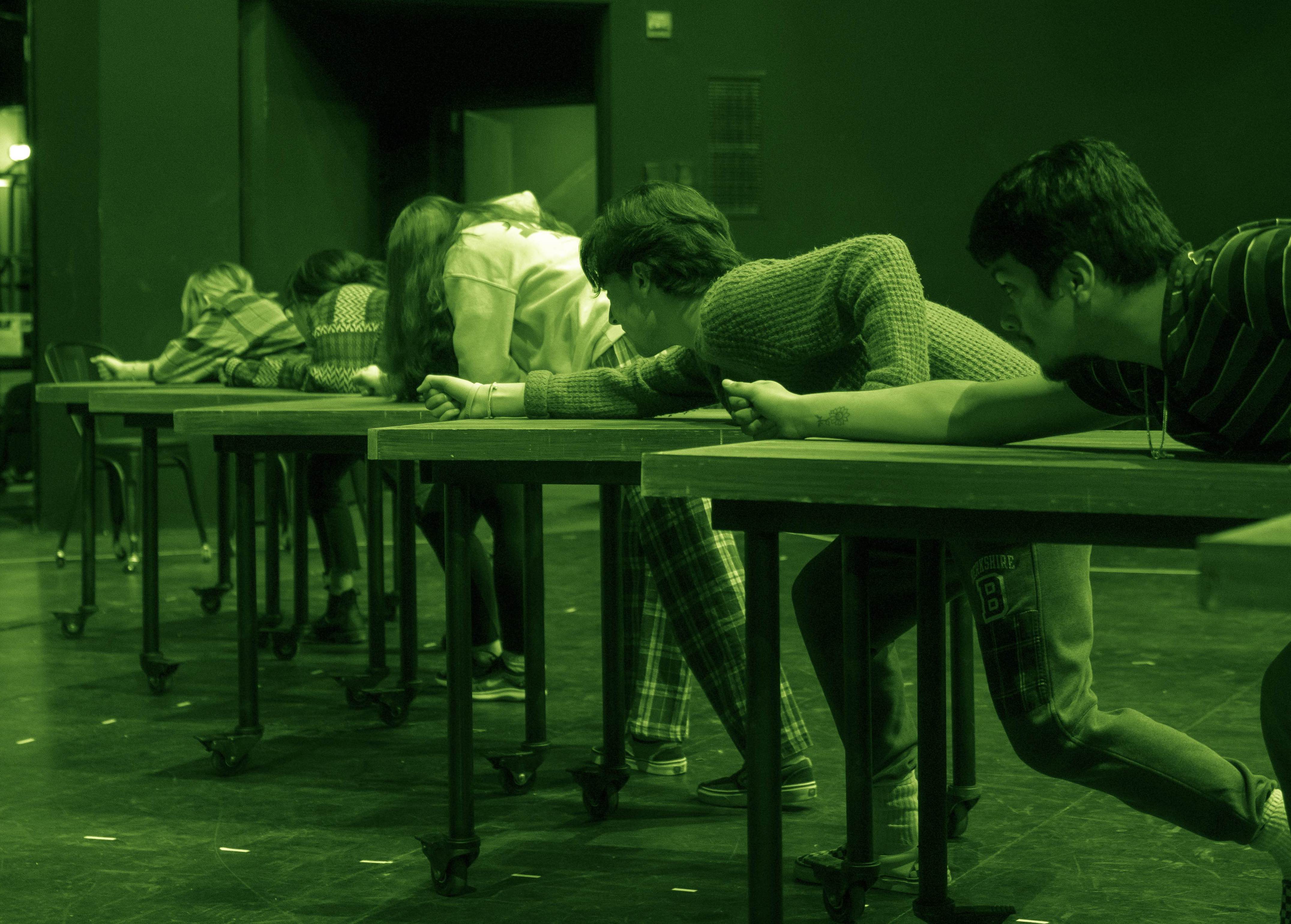 Radium Girls opens this Friday, February 28th and runs through Thursday, March 5th. All shows are at 8pm (with the exception of the Sunday matinee, which is at 2pm) at the Janet Kinghorn Bernhard Theater. Tickets can be purchased through the theater website. Call or email the box office at (518) 580-5439 or boxoffice@skidmore.edu with any questions.

Joe Newman-Getzler ’21 is an assistant editor for the Skidmore Theater Living Newsletter.