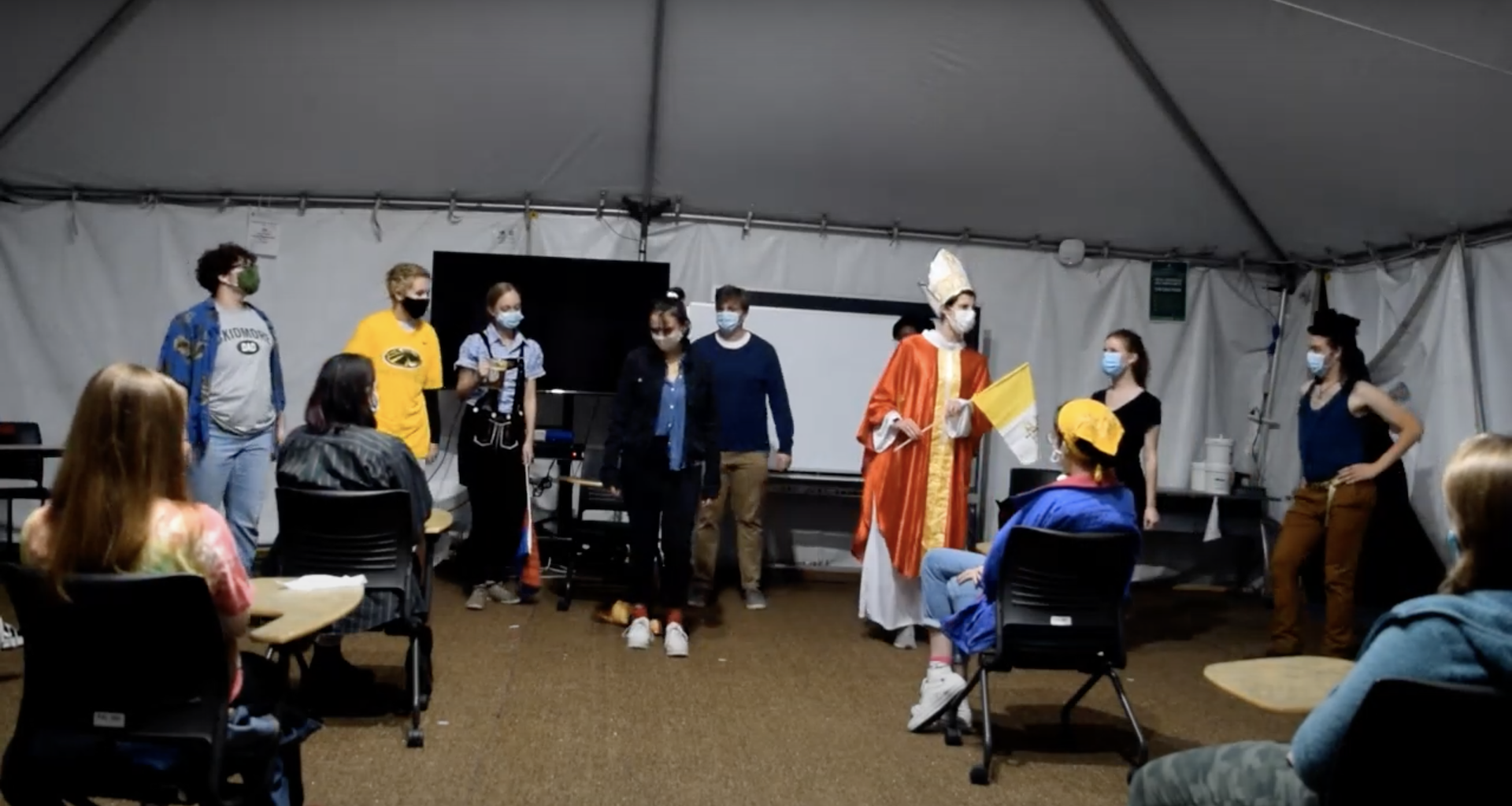 A still of the live (COVID safe) production of “Our Trip to San Marino,” complete with some signature Joe Newman-Getzler ’21 flags.

Recount your favorite road-trip movie. Perhaps it is Spring Breakers, Paul, Thelma and Louise, or maybe even Little Miss Sunshine. Have you ever thought to yourself, “I wish something adventurous like that could happen to me on a road trip”? Then Our Trip to San Marino, written and directed by Joe Newman-Getzler ‘21, might just be the play for you! This play captures the essence of a road trip comedy as it tells the story of two best friends on their last vacation together.

The plot of Our Trip to San Marino focuses on Riley Nelson and Natalie Welber, portrayed by Sophie Pettit ‘22 and Kathryn Stathakis ‘22 respectively, who serve as both the narrators and the protagonists of the story. The pair is like a female version of “The Odd Couple”; Riley is chill and laid back while Natalie is organized and lives by the rules. The two girls wish to spend the summer together one last time before attending two different Skidmore College study abroad programs. However, their plans of driving to San Marino, a country located across the Atlantic Ocean, are thwarted as they encounter a chocolate milk loving, car-stealing hitchhiker named Hubert DeVito (portrayed by Cole Darby ‘23), a dance-battling King of Roaches named Chad (portrayed by Finn Lyon ‘23), sour pudding acid trips, guardian angels, interpretive dancing car repairmen and more. 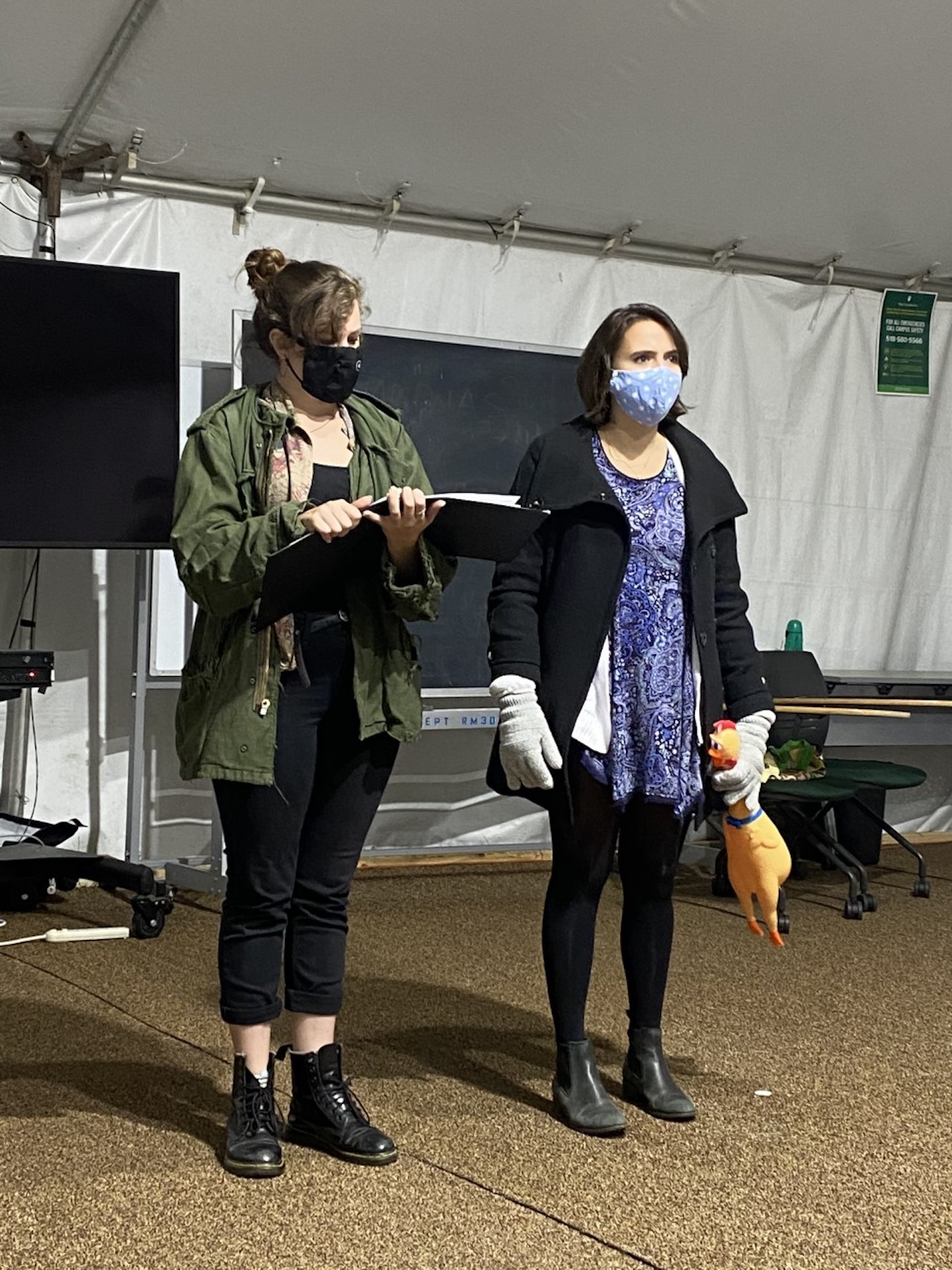 In reality, San Marino is a small country located in Italy, or as Newman-Getzler puts it: “It’s diet Italy.” Though often overlooked by the world, San Marino is actually an amazing country. In World War II and during the reign of Mussolini, San Marino provided homes for thousands of refugees. Plus, it de-criminalized same-sex marriage in 1864, qualified for the Eurovision finals twice, and has its very own vampire museum. However, as sung throughout the play, “It’s less a country, more a state of mind.” San Marino to Riley and Natalie is not only a cool vacation spot but their end goal; the paradise at the end of their long journey, the “Godot” they’ve been waiting for.

Of course, due to the COVID-19 pandemic, restrictions had to be made to the live production. The show took place in Skidmore’s Library Tent Three with a fully masked cast and an audience limit of thirteen people. The show was recorded and uploaded to Youtube for those who could not attend (which you can check out here). Aside from the actors playing Riley, Natalie, and Hubert, the cast members each played multiple characters, which were indicated by costume changes. Instead of having a pit band or foley artist, comedic sounds and background music were played through a bluetooth speaker. All of this made the theater experience feel more authentic, especially since cast members would often interact with the audience. I myself was chosen to “bust-a-move” for Chad, King of Roaches, and then told to “die dramatically” after I lost the dance battle. The characters were apt to break the fourth wall — Riley and Natalie were aware that their existence was only in a play. Also, the small size of the audience made Our Trip to San Marino much more funny and relatable, as that type of cast-to-audience interaction would not have been possible in a larger scale theater.

What also made Our Trip to San Marino so engaging was Riley and Natalie’s connection to their families, Skidmore College, and each other. The play referenced many aspects of pop culture and music, including jokes about musical theater, Natalie’s tendency to sing Billie Eilish songs, and the whole cast dancing to “You Get What You Give” by New Radicals at the end of the show. The play also referenced many jokes that only Skidmore students and faculty would understand. The girls’ interactions with their parents mimicked that of any teenage girl; they both loved their families but didn’t want to be smothered by them. I thought of my own mother when Natalie’s dad, portrayed by Finn Hogan ‘23, called her to make sure that she was still alive. 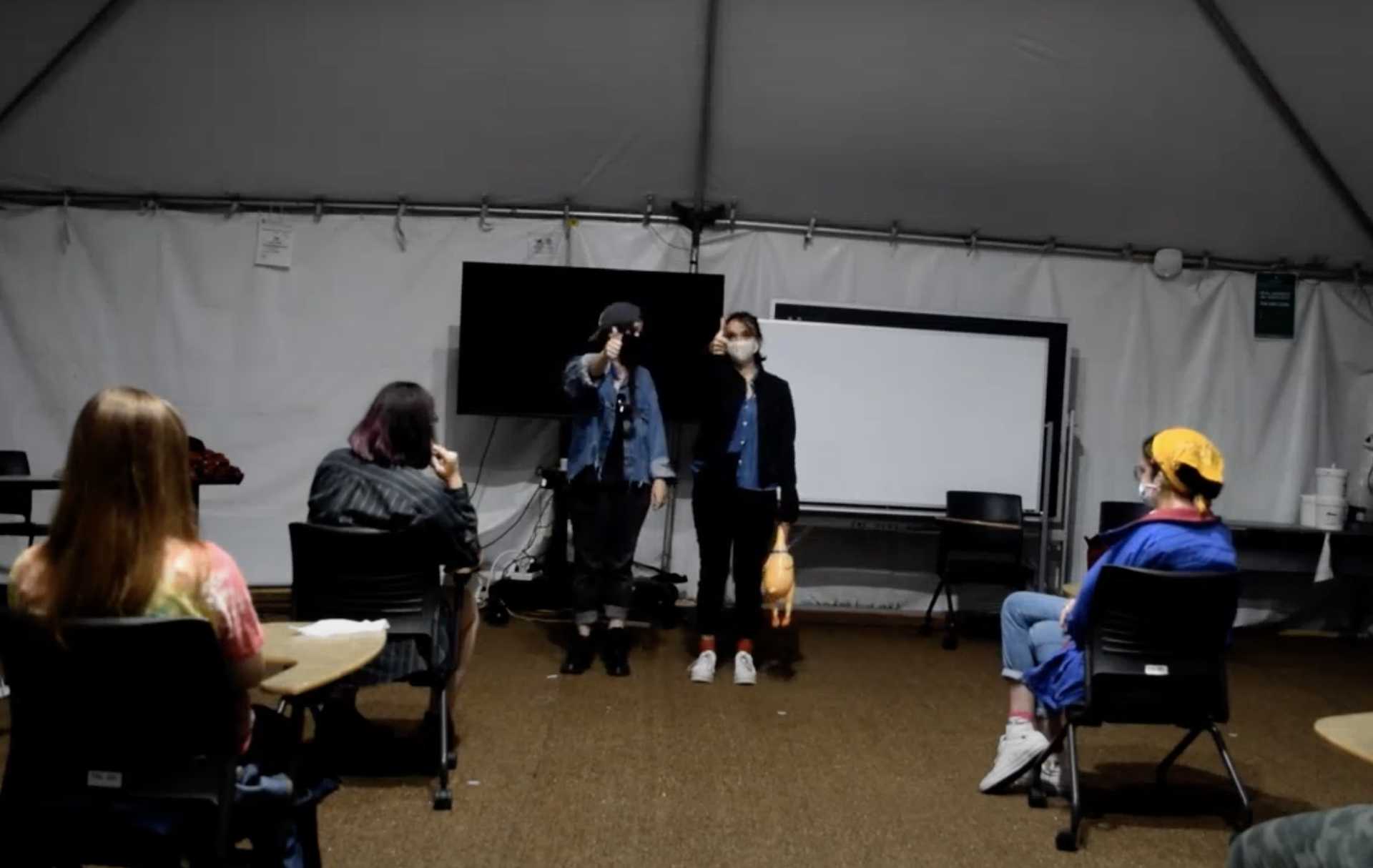 A still from the live production of “Our Trip to San Marino.”

Most importantly though, Natalie and Riley’s journey was all about learning how to deal with the unexpected and what it means to be a good friend. After trying to out-monologue each other, the two protagonists realize that their trip was never about finding San Marino — it was about being together. Overall, the joyful tone, optimistic themes, and relatable Gen-Z references made Our Trip to San Marino a hit. I could definitely see this play eventually being a comedy-of-the-summer film.

It is sometimes hard in slapstick comedy to identify the importance of the story. Newman-Getzler himself said in a Theater Company meeting that Our Trip to San Marino is “supposed to be a show that brings smiles to people’s faces after a long quarantine.” Despite the play’s humor, the message was not lost in translation. Doing what you love with the people you love is all that matters. 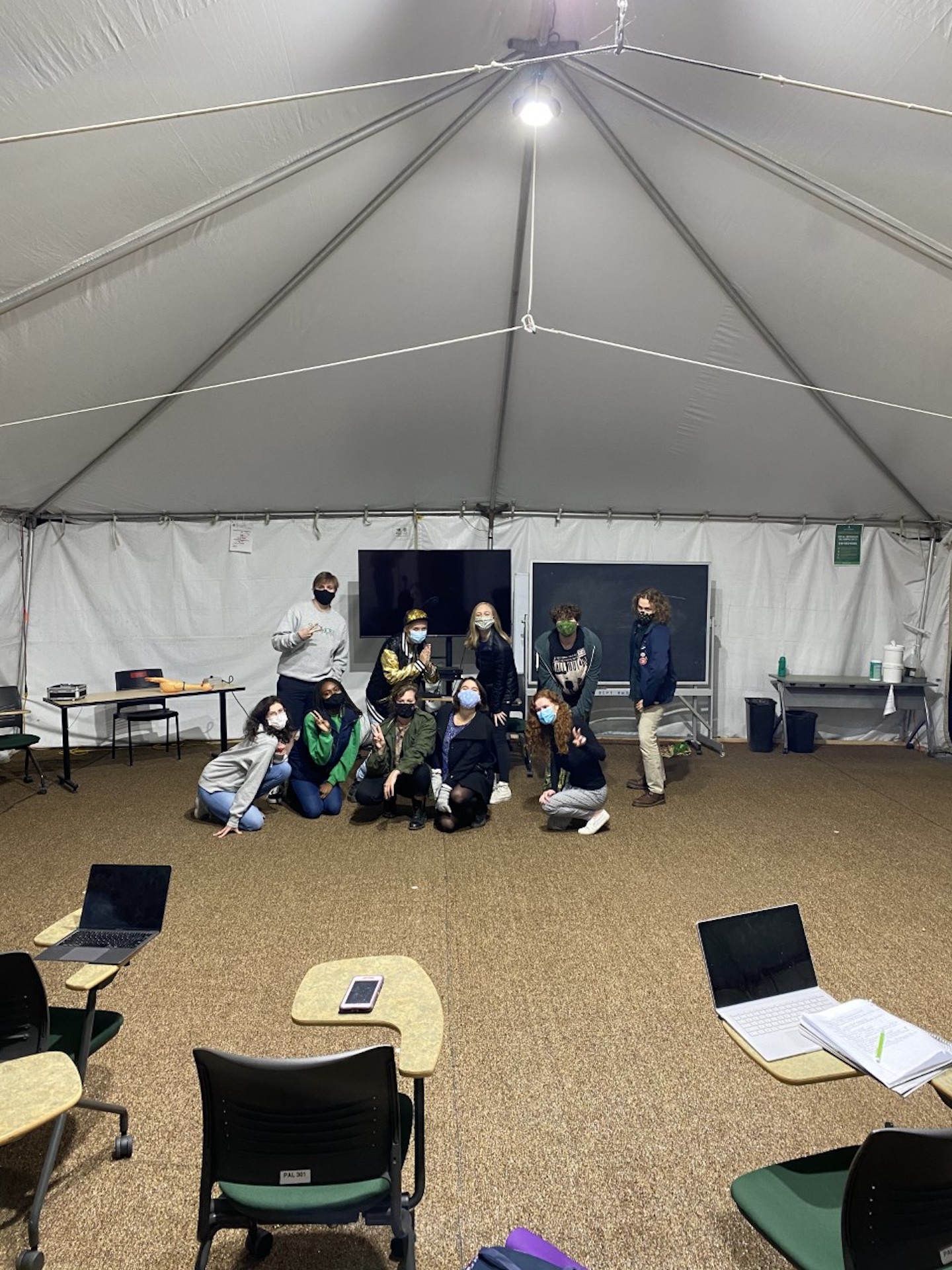 The full cast of “Our Trip to San Marino” posing in the Library Three tent (Photo courtesy of Leah Alden Cunningham ’23).

Written and Directed by: Joe Newman-Getzler ’21

Maggie McGuire ’24 is a staff writer for the Skidmore Theater Living Newsletter.