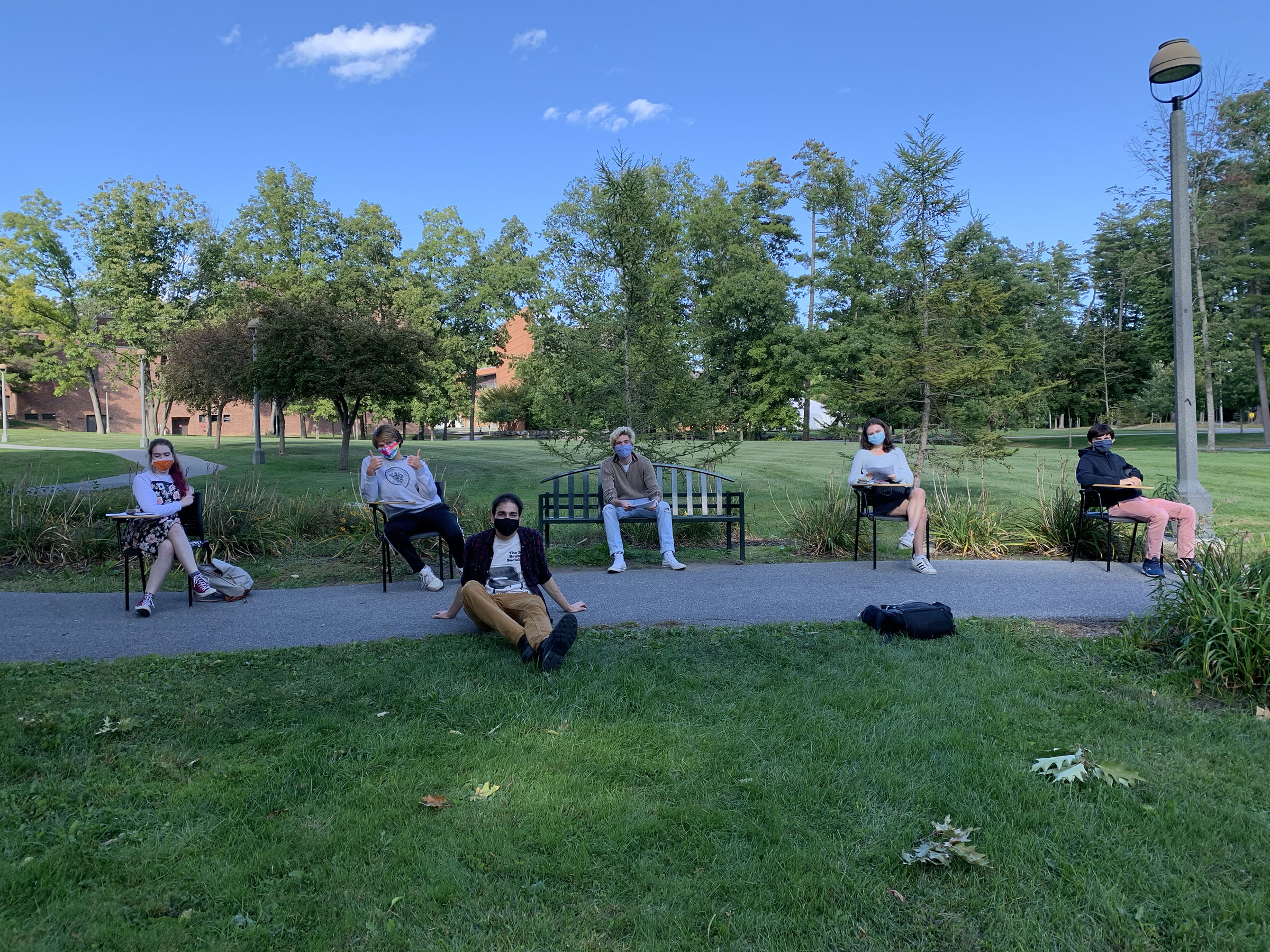 Playwright Zachary Troyanovsky ’21 (front) and the cast of “Everything, Everywhere” at an outdoor rehearsal.

The staged reading of Everything, Everywhere, written by Zachary Troyanovsky ‘21 and directed by Eliza Kuperschmid ‘21, premiered Wednesday, September 23, 2020 and had a final reading on Wednesday, October 7. The magic of live theater has been taken away from us these past couple of months due to the COVID-19 pandemic, so it was truly wonderful to be able to attend this first theater event of the semester live and in-person.

The play was read outside by the Skidmore pond and gazebo. The audience sat on the grass, with masks on, and faced the actors who sat in a line and read the play. The feeling of coming together for a theatrical experience was something that was greatly appreciated by all who were in attendance.

Everything, Everywhere is an abstract play that covers the topics of adolescence, memories, love, and coping with the idea of forgetting. In life, we often take for granted the small and seemingly insignificant events that take place everyday. This play really made me think about that, especially in this time of quarantine and isolation. Small occurrences have become so much more important during this time and events, I believe, won’t be so easily forgotten. 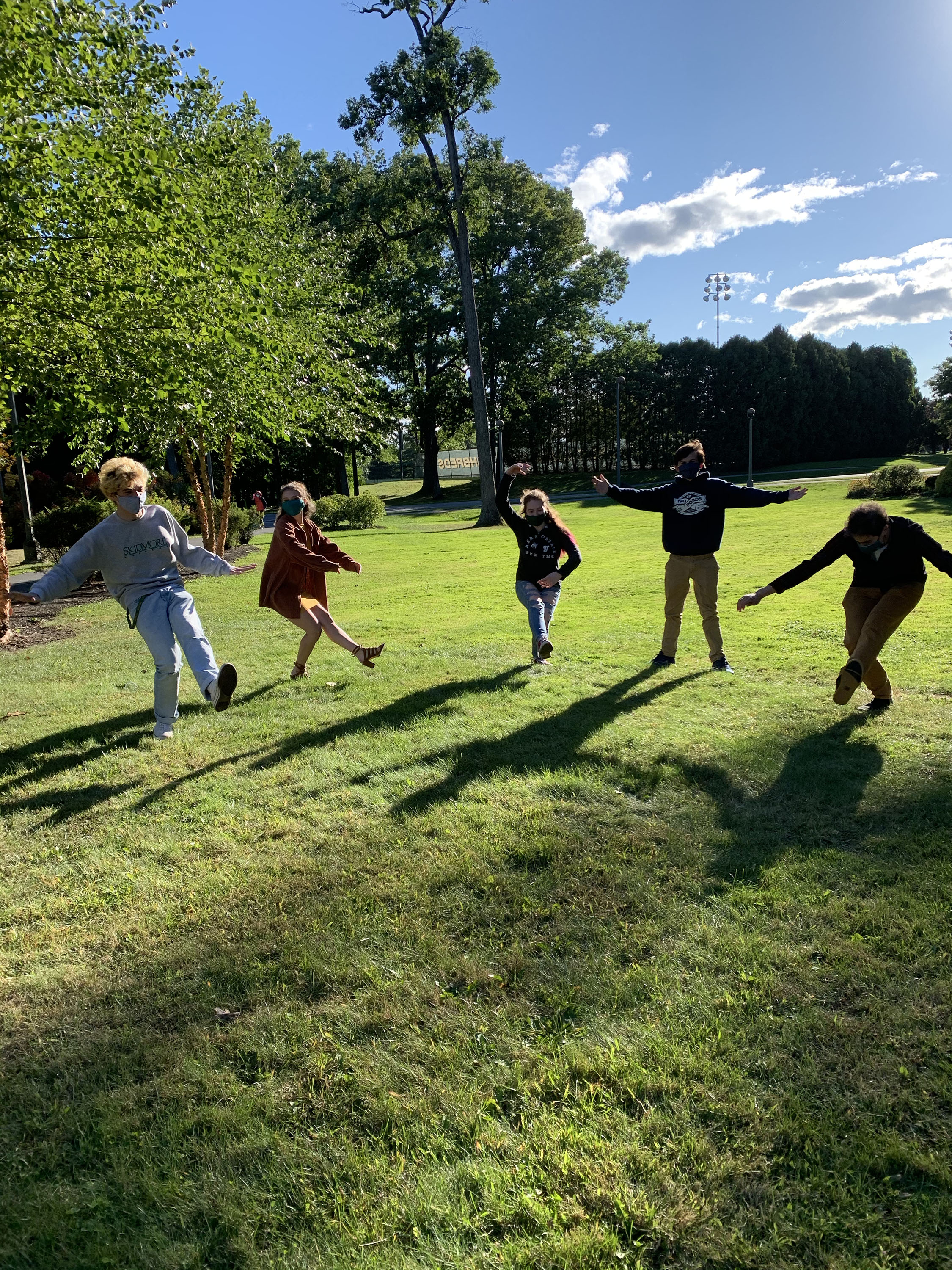 The cast of “Everything, Everywhere” stretching in between run throughs.

The play focuses on the character Yasha, played by Jordan Gonzales ‘24, and his younger self Yakov, played by Penn Hoen ‘24. Both men step in for each other in a series of flashbacks that revolve around trying to remember a certain event in Yasha’s life. The specific event that he is trying to recall is never specified but what the audience does know is that it took place with the character Laima, played by Leah Alden Cunnigham ‘23, who is assumed to be a past girlfriend of Yakov/Yasha. Laima and Yakov/Yasha recount memories of looking at the stars and eating Subway sandwiches. These represent the small moments and memories that may appear minute in the grand scheme of life but still have the ability to shape us along the way.

Troyanovsky was able to include intense imagery in his play by using the repeated motif of crumbling. The harder Yasha worked to remember, the more his mental images crumbled away from him. Kayleigh Duggan ‘24 recited the stage directions to help enhance the mental picture that was being created for the audience. Each time Yasha is with Laima, she is described as becoming increasingly faded and cracked, until she completely disappears by the end of the play. 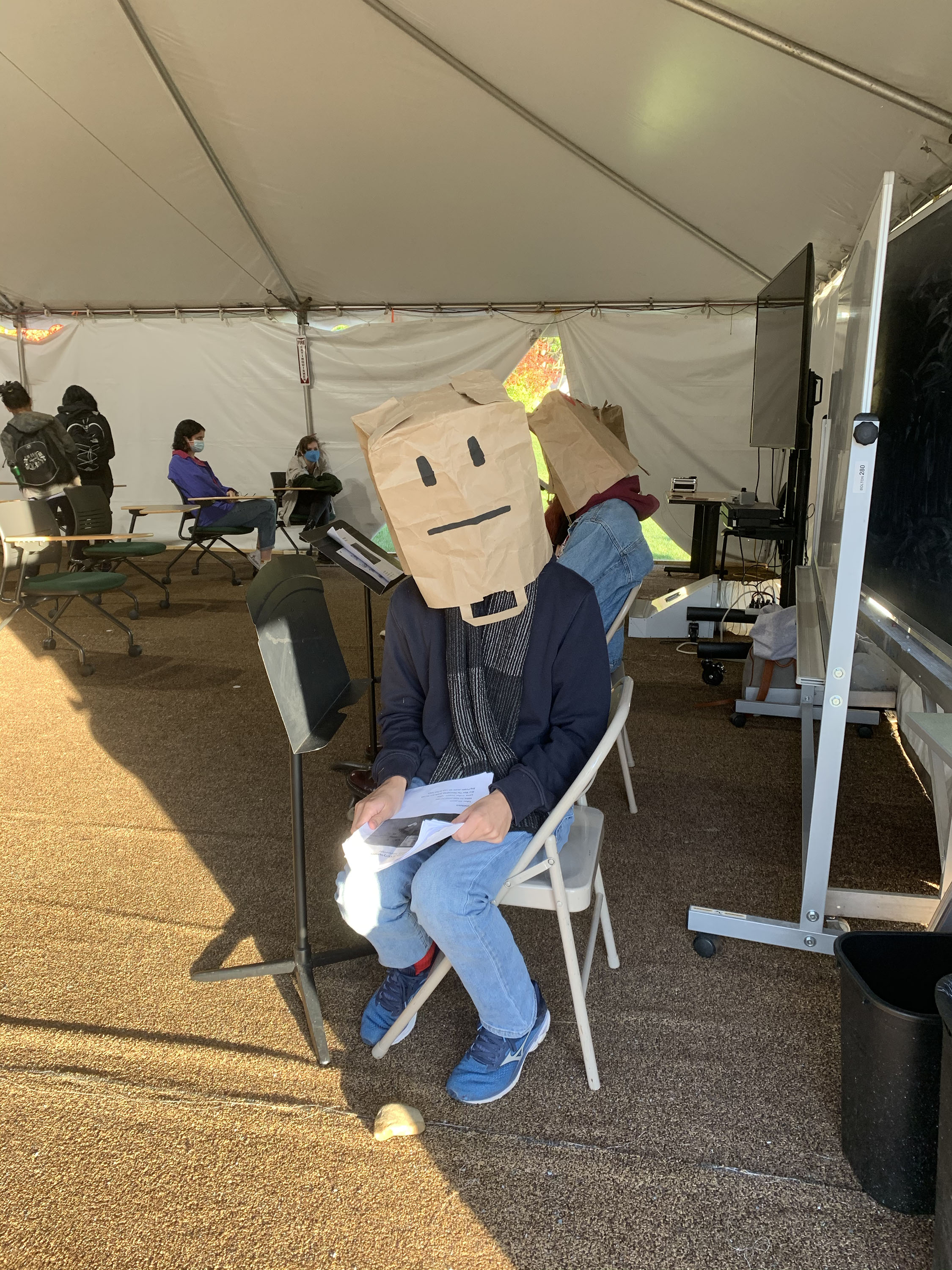 Actor Penn Hoen ’24, with his “Bag People” costume on, getting ready for the second reading of “Everything, Everywhere.”

The idea of outsiders looking in is also evident in this play with Jonah Harrison ‘22’s characters: the Man, the Boy, and the Optometrist (The Optometrist was added as a character in the second draft of the play). These characters held an outside perspective on Yakov/Yasha. They were able to provide a bit of reasoning to their paranoid counterpart (Yasha/Yakov), who was struggling with remembering. The outside characters showed Yasha that he is in more control of his own memories than he thinks and that letting go of the uncertainty is okay. At first, Yakov/Yasha are a bit defensive, but the cyclical structure of the play allows for this scenario to repeat again and again until Yasha can come to his senses. The experience of rationalizing his own thoughts becomes more vivid as Yasha’s past memories become more faded and cracked.

The repetition of dialogue and events in this play really spoke to the cyclical nature of life, especially right now while our routines are very set in stone. Small memories are important to hold on to but when life gets complicated, it is okay to in fact just let go. Troyanovsky’s writing and Kuperschmid’s directing did a beautiful job of reminding us that we can either decide to let our memories live in our minds or carefully let go of what no longer needs to be remembered and make room for the new. 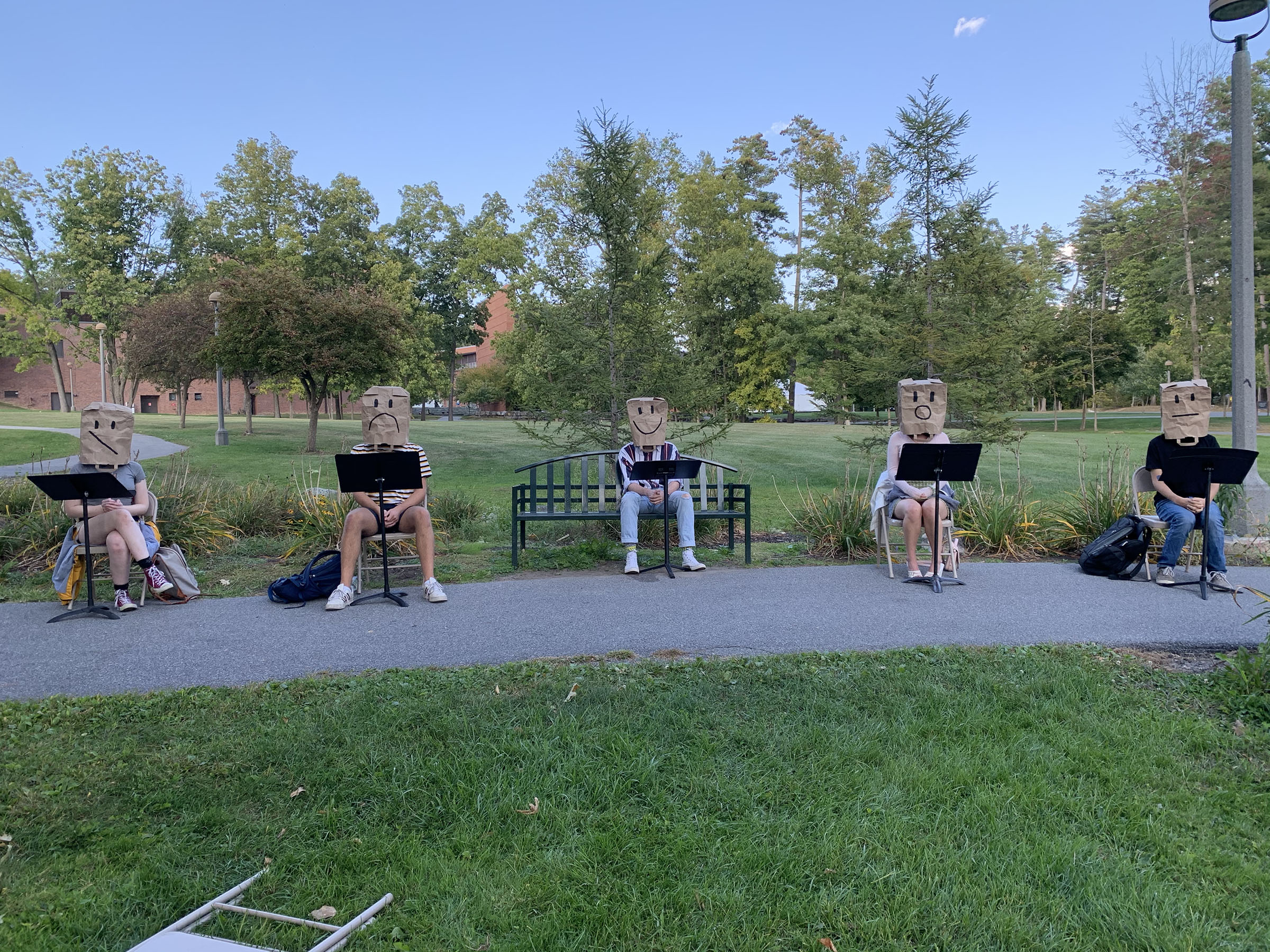 The cast of “Everything, Everywhere” before the first reading. The bags are a nod to the “Bag People,” one of the reoccurring images from the play.