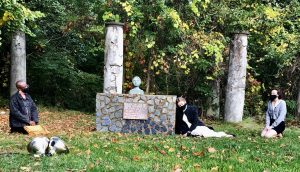 Pandemic-era theater is inherently different, but, in the first Studio Lab production of the semester, Eliza Martin ’21 proves it is not impossible. I Talk to the Flowers by Madison Fielder and directed by Eliza Martin ’21 details a conversation between two women writers, May Ayim (Anesu Mukombiwa ’24) and Sylvia Plath (Maddie Evans ‘24), at Virginia Woolf’s (Amanda Hinge ‘21) grave. The poets discuss whether brilliant women are doomed to commit suicide or if that is a notion conceived by Woolf’s own fate.

The play took place amidst the ruined columns and vibrant fall foliage behind the Surrey Williamson Inn. Woolf rests against her own grave, represented by the columns, during the duration of the piece, as Ayim and Plath search for an answer to the impossible question: is it their fate to mimic Woolf’s death if they are to be revered as authorial geniuses? As Ayim and Plath discuss this question in detail, they uncover how much they truly have in common. Both are women writers who yearn to be remembered. Ayim is an Afro-German poet who writes about racial equality in Germany, while Plath is a poet from Boston, MA who struggles with suicide. They come from two different worlds and two different time periods, yet they find themselves grappling with the same ideas. 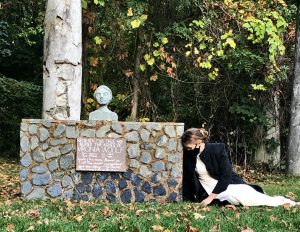 During their conversation, Woolf slowly begins to wake and inserts herself into their discussion. From Woolf’s incoherent ramblings, the two learn that death, and suicide, in particular, will not solve their problems. Plath begins to remember that she is, in fact, dead, and realizes that she is stuck in a never-ending cycle of repeating her writing in hopes to remember, as she begins to forget everything. Woolf and Plath commiserate and Ayim falls deep in thought. The play ends with Plath and Woolf returning to their resting places, tied by vines to the Earth, and Ayim walking back down the garden path. It is unknown what Ayim decides to do.

Eliza Martin did a great job handling such a heavy, sensitive subject, while also allowing for the celebration of these powerful women writers’ works and all they accomplished in their lifetimes. 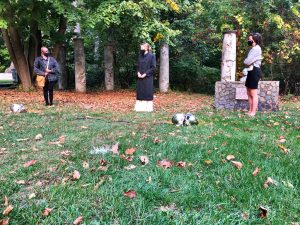