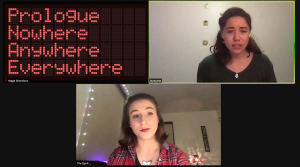 Yael Schoenbaum ’21 and Anna Marie Fama ’21 in the Prologue

Exactly two weeks after the first reading, Shelby Fairchild ‘21’s play By Design returned for another strong readthrough on Wednesday, November 11. Fairchild’s play takes place in a dystopian world full of cemeteries and hidden record rooms. There are characters who have the ability to interpret a person’s entire life just by touching them and, on the flip-side, characters seek to destroy these “Readers.”

Looking to find more information on her mother’s disappearance, Alesandra (played by Isabella Kiely ‘24) finds a reluctant Reader named Natasa (played by Emma Powell ‘23) in a graveyard, hoping that she can help. After some convincing, Natasa agrees and the two start searching. The journey becomes dangerous once the secret identity of Alessandra’s father is revealed to be The Aristocrat (played by Will Davis-Kay ‘23) — a man hellbent on “fixing” Readers so that they can no longer use their gift. Sneaking around her father and investigating her mother’s disappearance further, with the help of the parental record room employee, Max (played by Mary MacKeen ‘23), Natasa and Alessandra’s relationship shifts and heads in a romantic direction. Through betrayal, heartbreak, and bravery, the two women run away from the Northeast to Nevada to find love and, hopefully, to find Alessandra’s mother, Syntyche (played by Yael Schoenbaum ‘21), who the audience learns has turned into a doomsday preacher being guided by the Spirit (played by Anna Marie Fama ‘21). 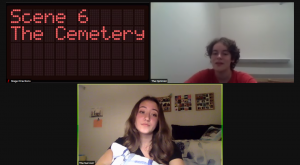 By Design’s newly added epilogue gives the play a Brechtian feel. We, as the audience, don’t know what happens in the end. This is left up to interpretation. There is no closure. But the Spirit raises a question in the epilogue — “What does a playwright owe to her audience? Does Fairchild need to give the audience this closure? Why is it expected of her to do so? Does she need to provide a clear ending to prove herself amongst the ranks of male playwrights? Much like Brecht never revealed the “real” ending of Waiting for Godot, Fairchild does not need to do the same with her play. We, as viewers, are not owed anything by the playwright. 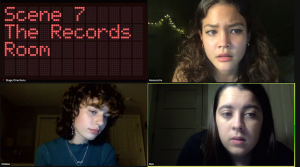 Once again in a very Brechtian fashion, the audience of Fairchild’s work are always aware that they are watching a play due to the Stage Directions (Sarah Linder ‘23) being read aloud. One of the many things that made By Design so intriguing was that the audience is given the gift in this Epic Drama of reflective detachment. The ending is left to individual interpretation and opinion. This leaves room for continuous discussion long after the play is done. The audience can create their own ending; none are necessarily right or wrong, but that’s the fun of it. 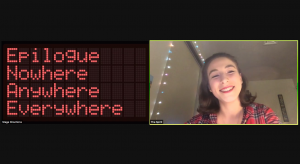 Anna Marie Fama ’21 in the Epilogue