On Saturday, February 27th, and Sunday, February 28th, the Skidmore Theater Department offered an Improv Comedy workshop with Rachael Mason from The Second City in Chicago. Rachael joined us via Zoom for an in-depth weekend of fun and learning. Throughout our time together, we learned about the history of comedy as well as how to work in both long-form and short-form comedy. Through these long and short-form scenes, Rachael emphasized the idea of “heightened intelligence” – when two characters are in a space, they don’t have to be interacting with their environment in a literal way. As performers, we have the ability to place these people wherever we want. For example, if two characters work in an office setting, they don’t have to be talking about literal office work, they could be having a conversation about the party they went to the night before or a documentary they saw on TV. 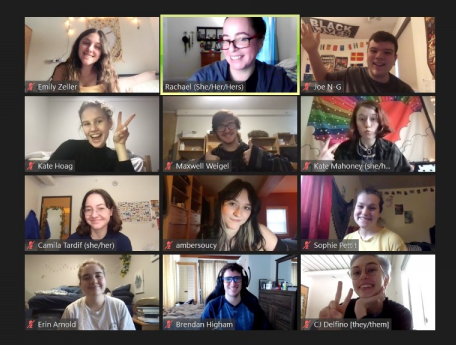 In addition to the idea of long and short-form comedy, something else that stood out during the workshop was the two separate games of freeze tag we played. Freeze tag is an improv scene exercise made up of five-line scenes where people are allowed to call “freeze” and tag someone out of the scene. The game thrives off of physical positions that are taken on by the performer who enters the scene. In the first round, we turned our backs to the performers so we could only hear them. When someone felt it was time to switch up the scene they would call “freeze,” but instead of tagging themselves into the game, the group would call on a new player to enter. This different rule enabled people to be less nervous about entering the game. When this round was over, Rachael pointed out the importance of taking your ensemble members into account while you perform; if we are not looking out for each other then we cannot create a successful improv environment.

Rachael also had us split up into breakout rooms to take lines or moments that stood out to us during the improv section and turn them into written work. Each group wrote ten different blackouts and three individual sketches. We all read each of our sketches to the group and then individually chose the one we felt was strongest. After choosing our sketch, we spoke to Rachael and got notes to tighten up our pieces. After the weekend, we placed all of the work we made into classic Second City running order.

Rachael was able to create a weekend that felt both fun and informative. I, and many other students who participated in the workshop, felt that they learned something new and were able to apply it to their studies. Brendan Higham, class of 2021, shared this about the weekend: “The comedy class was a really great experience! I don’t have much of a background in traditional comedy but it was fascinating to hear about the history of Second City. I would highly recommend this class to anyone looking to improve their comedy or even their acting and writing.” 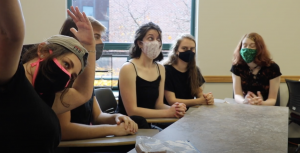 Kate Mahoney, class of 2022, also shared her impressions: “This course was such an amazing opportunity and I’m so grateful to have been a part of it! As someone who aspires to have a career in comedy, it was so cool to have the opportunity to work with someone as talented and helpful as Rachael. We had the opportunity to learn not only tons of improv tips and methods, but also how to apply what she taught us about improv to comedy writing, and even some history of comedy! Rachael was so great about answering questions and providing resources for us to help us build upon these skills, it really was an amazing environment to work in for everyone, regardless of skill level or experience!”

Although the challenge of Zoom is something that cannot be ignored, an extraordinary group of people came together this past weekend to make the best of our situation.