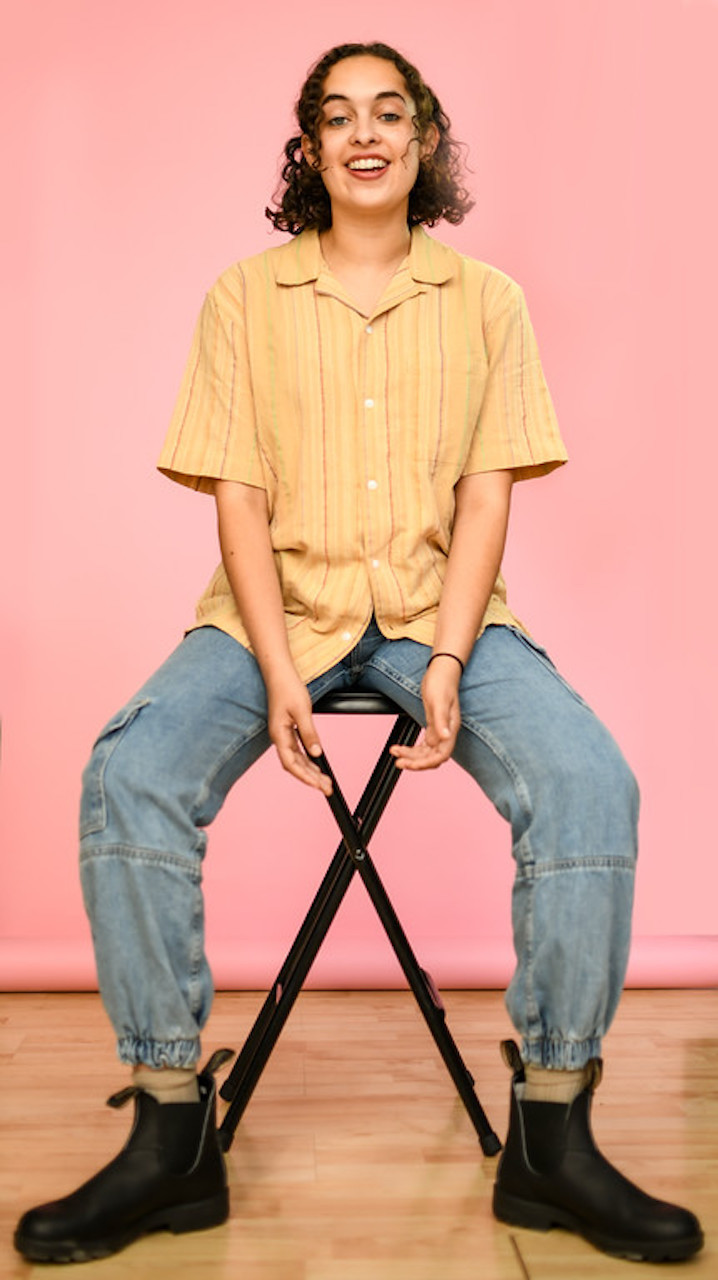 This is my first time writing an alumni profile and I want to make sure I get it right. I spent hours sifting through the profiles in our archive reflecting on STLN giants of the past and their work. Every profile starts with describing the location of the interview, so that’s where I’ll begin too.

I let Zoe Lesser (‘19) in from the waiting room to my Zoom room and immediately feel a comforting sense of joy and familiarity radiating from behind the screen. Zoe is seated outside in front of an adobe building. It looks cold where she is and I realize that I just assumed that she was somewhere on the East Coast. I ask her to remind me where she is and she replies “Santa Fe, New Mexico.” I already know I’m in for an incredible story (and I also now realize that it is 7:30 in the morning where she is so I appreciate her meeting with me even more).

I learn that the West Coast is not so new of a location for Zoe as she is a Los Angeles native. Coming into college at Skidmore, she always knew that she wanted to major in Theater and English. As a first-year, she auditioned and was cast in the Mainstage productions for both the fall and spring semesters. Through those productions, she gained confidence within the department and met a lot of upper-class people who really took her under their proverbial wings. 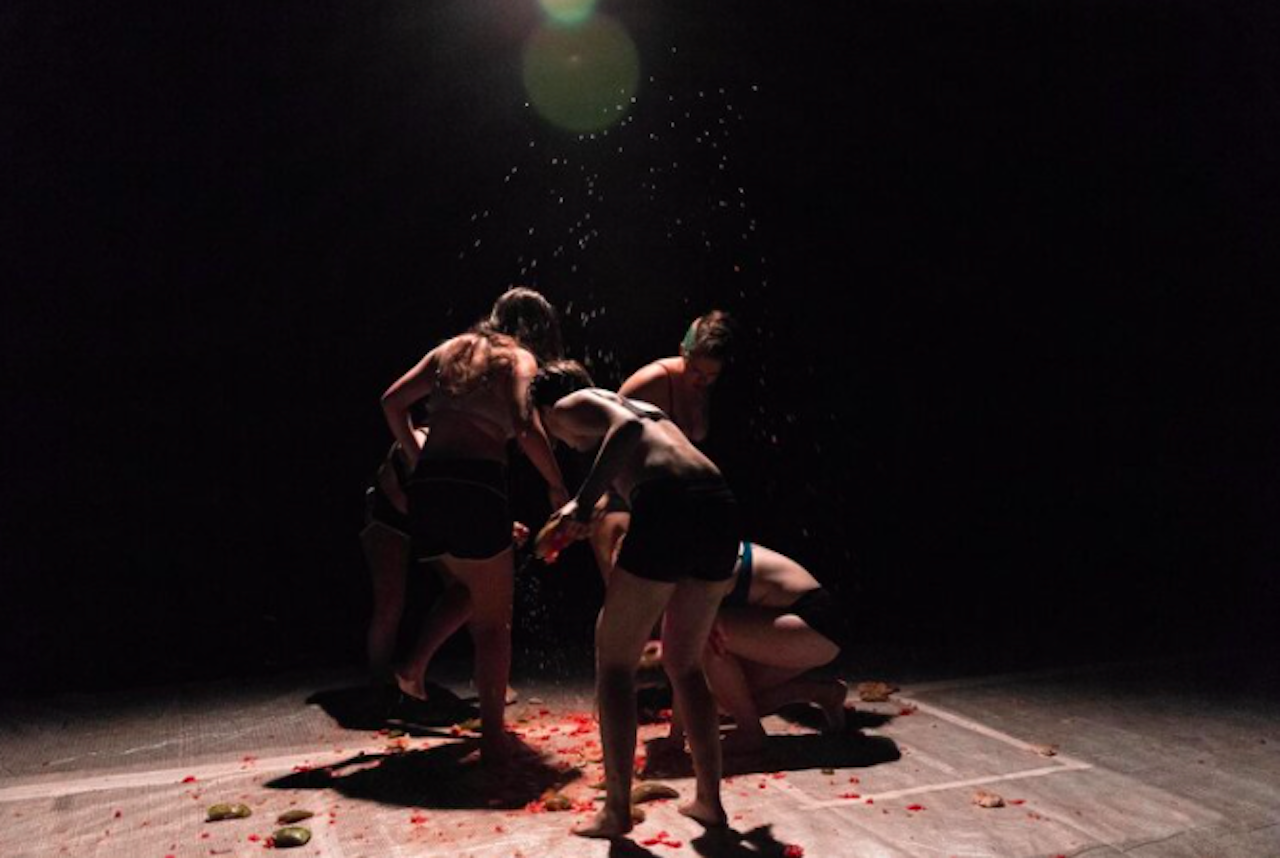 A still from “Revolt. She Said. Revolt Again.” directed by Zoe Lesser ’19 at Skidmore College [Photo by Dante Haughton ’19].

Inspired by her fellow Skidmore actors and, because she is always game for an adventure, Zoe studied abroad in Russia her junior year.

“I was in an improv group [at Skidmore] and there were two people in my improv group who had gone to Russia and they would be able to pull off bold, physically acrobatic, images,” Zoe said. “Like they would just walk on each other and I was like ‘Oh I MUST go.’”

She spent her summers away from Skidmore, studying with and working for the Orchard Project.

“It sort of humanized artists to me,” Zoe said of her experience with the Orchard Project. “I sort of put all people who make cool art on a pedestal of like godliness that was so unattainable but when someone you think is a genius misses their train it’s like oh… The mentorship at the Orchard Project made me realize that to make things, you have to just make things.”

And this revelation led to some exciting moments for Zoe, like working on a site-specific piece called “Two Man Show” at the Bandersnatcher house with her best friends and fellow alumni Kallan Dana (’19) and Erica Schnitzer (’18), which was produced as a project outside of the Theater department. Within the department though, Zoe was eager to work as a director. She was Assistant Director for Julius Caesar (2018, dir. Larry Opitz), director of the studio lab Revolt. She Said. Revolt Again. (2018), and director of a special performance of The Secretaries that was performed at the Skidmore President’s home in the carriage house (2019).

After graduation in 2019, Zoe moved to Chicago with the same roommates she lived with at Skidmore. She was lucky enough to have secured a job in Chicago as an Apprentice at Steppenwolf Theatre for their Lookout Series. She loved her job and felt that she had a pretty seamless transition from Skidmore life to Chicago life. 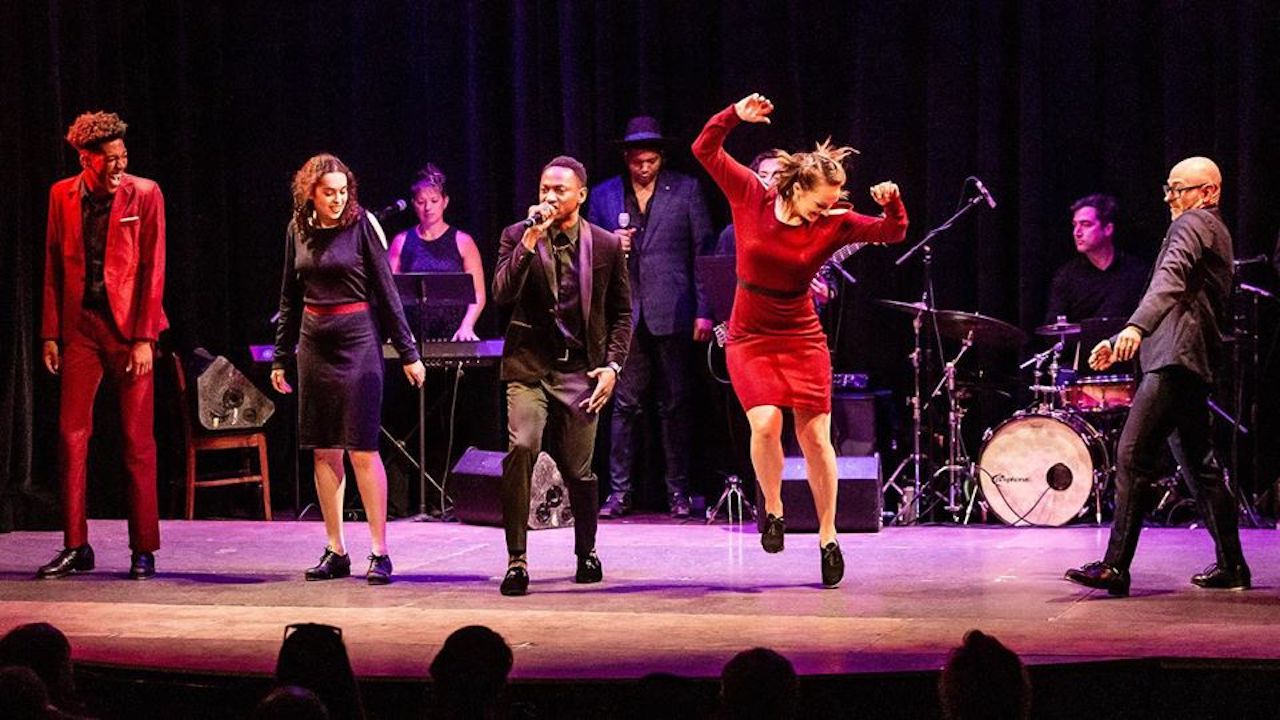 Zoe Lesser ’19 (second from left) in a tap dancing performance, a passion that she has gotten more time to explore since graduation.

“[Working at Steppenwolf] was the best way possible to meet a bunch of Chicago artists because I was in a position of supporting them, I was producing their shows and making sure their needs were met.”

Zoe also reflected that her Skidmore education helped her prepare for the big move to Chicago.

“Because I took John Michael DiResta’s 21st Century play class — because he was Northwestern educated — I sort of had a better grasp on plays in Chicago, like what had been hot there previously… it’s so sad because that life is so dead now because of the pandemic.”

I pause as I realize that Zoe really only had just a few months of normal post-grad life before the COVID-19 pandemic began in 2020. I am curious how the transition was for her and I ask Zoe, “where are you now —  literally and in general in your life?” 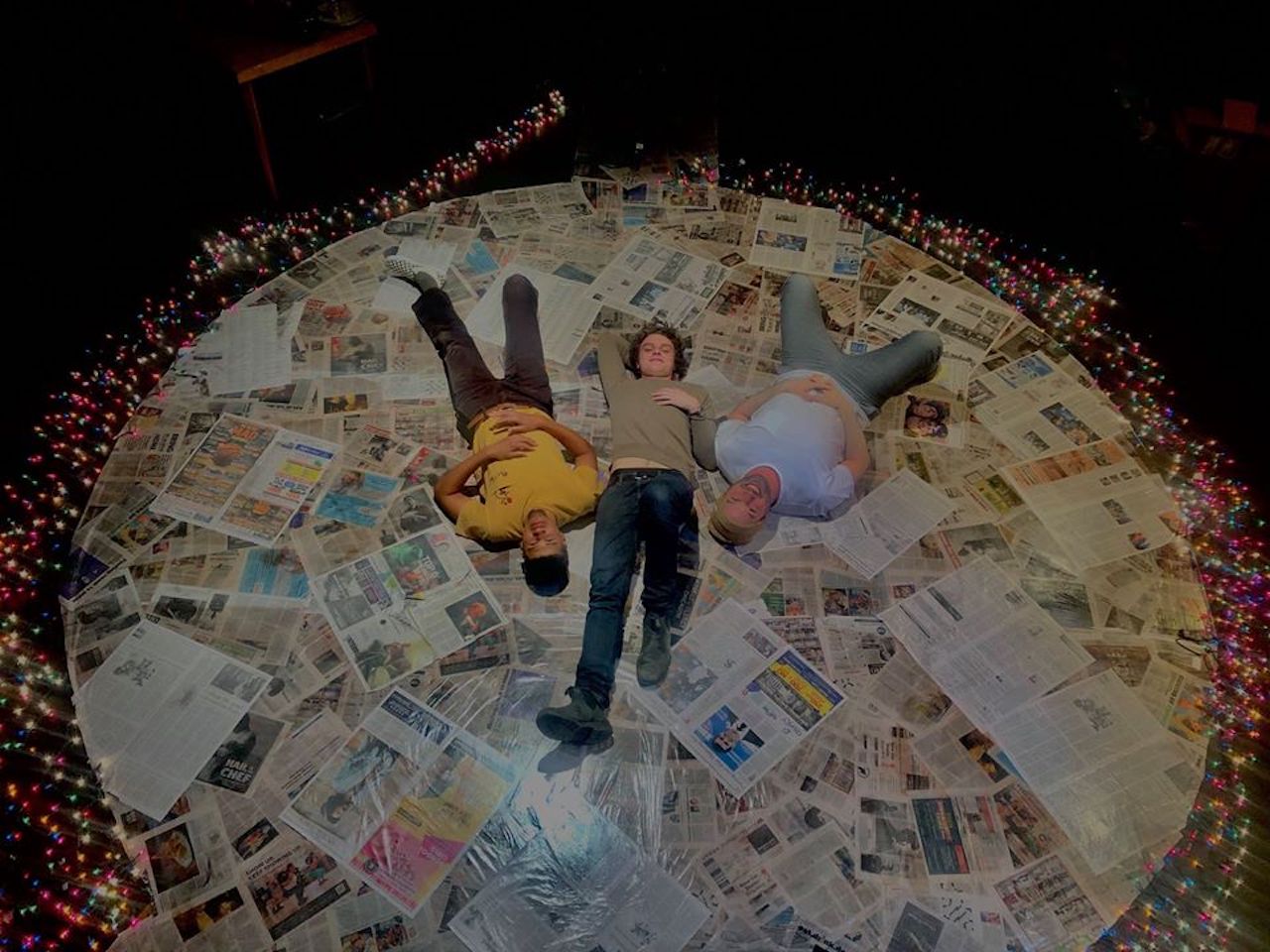 A still from “Clementine,” the show that Zoe Lesser ’19 was producing until it closed for the pandemic.

Right before the pandemic, in addition to her position at Steppenwolf, Zoe was working at a movie theater and producing a show written by her hometown friend that was going to premier at Chicago Dramatists called Clementine. Once the pandemic began, she had her hands full with a variety of theater projects: directing a play in a friend’s backyard with fellow Skidmore alumna Bianca Thompson (‘19) and assistant directing and dramaturging at the Neo-Futurists Theater. Zoe also spent time teaching tap dancing, a passion of hers that she has gotten to explore more since leaving Skidmore. She beams as she talks about having socially-distant tap sessions outdoors with her friends and colleagues.

That same hometown friend from Clementine also referred Zoe to April Cleveland, a director who was an MFA at DePaul University. Zoe really admired April and her work so she reached out and asked to meet up and connect. April agreed to meet and a strong connection was formed.

As the pandemic progressed, Zoe received an email from April (an email in which Zoe was the only “outsider” out of a group of all DePaul students). April made an exciting offer: she asked these students and theater artists to join her in Santa Fe, New Mexico to live together and make art.

“‘What if we spent the pandemic living with each other and making new work?…’ It was a really well-crafted email!” Zoe said.

After “detangling” herself from her busy life in Chicago, Zoe packed up her things and drove to Santa Fe. Zoe currently lives with April and the rest of the company of the Exodus Ensemble. The ten artists started out living together in three casitas and created compositions together that are site-specific to the Santa Fe landscape and architecture. 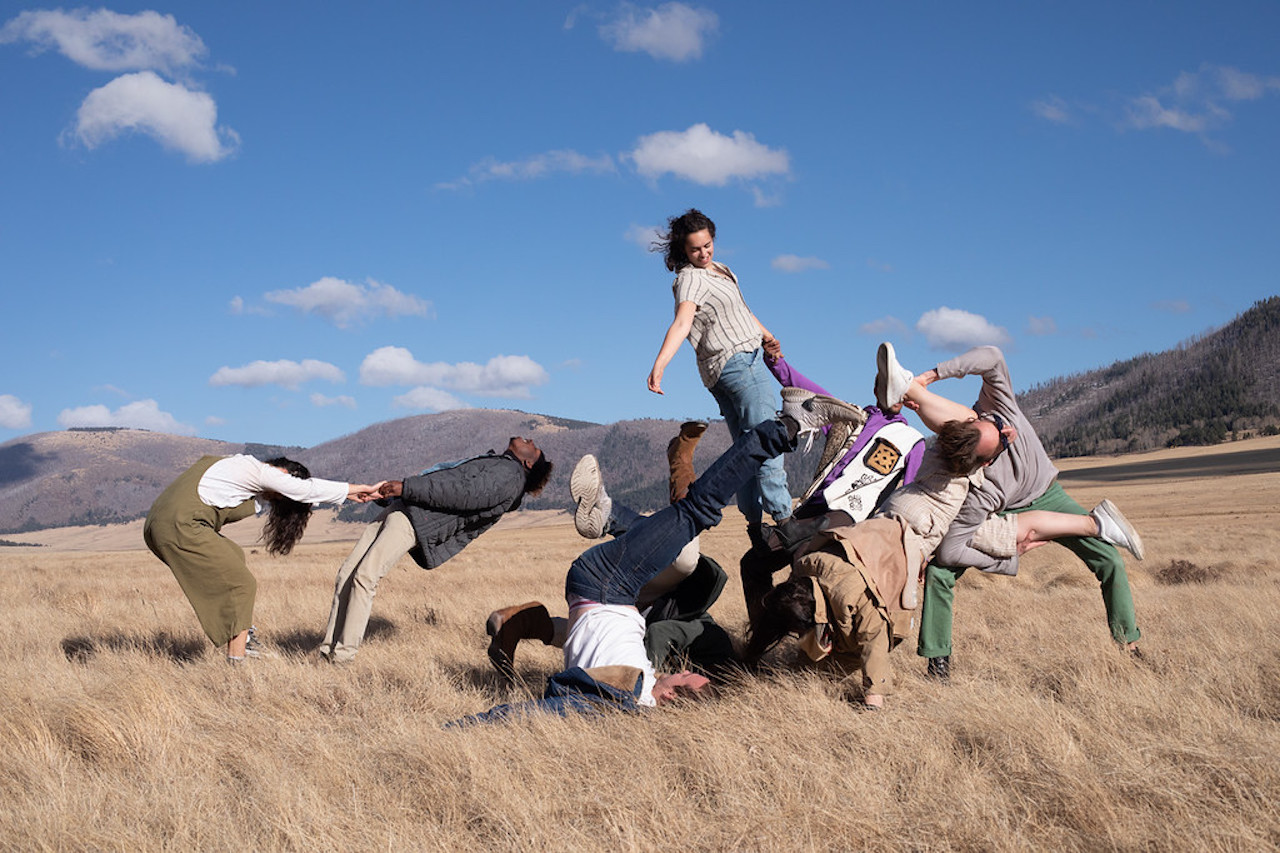 The group’s main project has been a three hour, roving adaptation of Chekhov’s Ivanov, which they performed for an “audience of one.” After the performance, the group had to take a brief hiatus.

“Very Chekovian, but we were told (although it wasn’t true) that those casitas were getting demolished early January, so we knew we had to leave,” Zoe said.

Eventually, she returned to Santa Fe to the Exodus Ensemble’s new house, which is where she currently resides and works. The Ensemble continues to work on their Ivanov piece and have been performing for small audiences who are in a “COVID bubble” together.

In just about two years since leaving Skidmore, Zoe has accomplished a lot. She says that she’s learned a lot about professional artists and their humanity.

“People make decisions for very human reasons,” Zoe says. “Everything is subject to all of these factors that are outside of the actual art-making. Everyone, or a lot of artists, are just throwing things at the wall and seeing what sticks, [and realizing this] is exciting and humbling. How are you going to throw that thing against the wall, you know?” 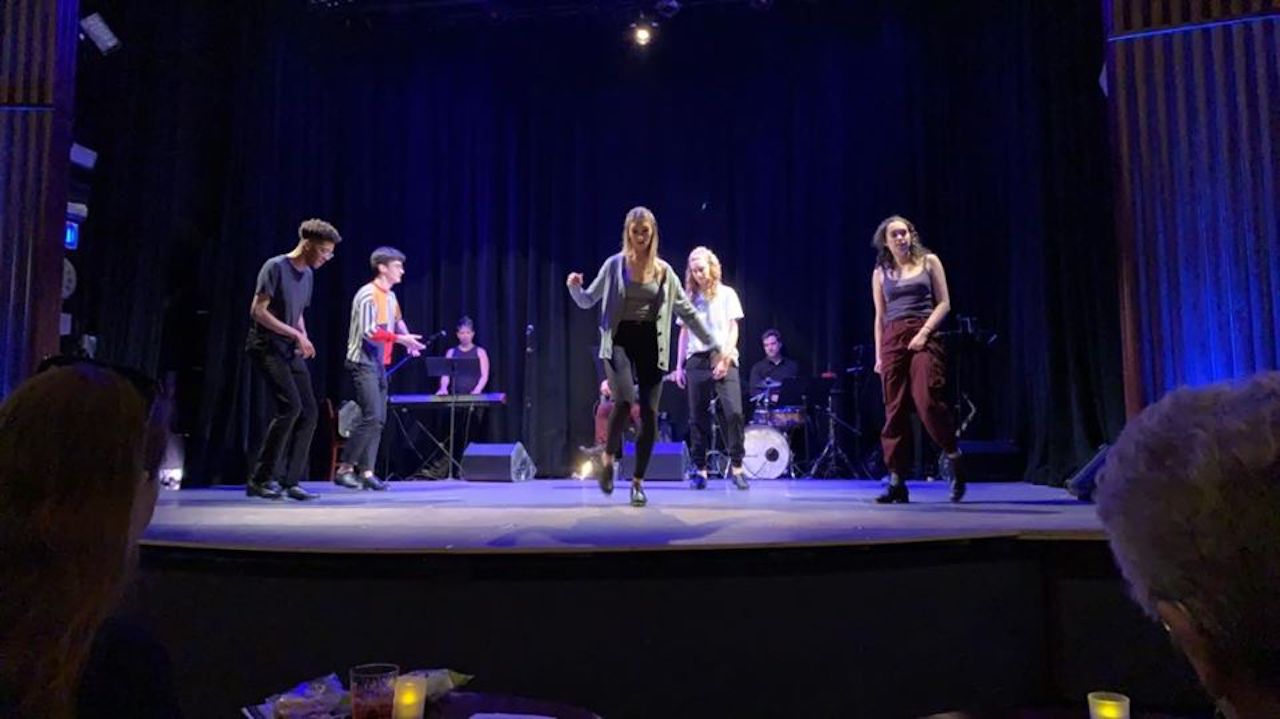 Zoe Lesser ’19 (right) in a tap dancing performance, a passion that she has gotten more time to explore since graduation.

“Just because things have always been a certain way, doesn’t mean that they are good. It doesn’t mean that they are tried and true. It is up to us and the people making theater to imagine and materialize a better industry for ourselves and if things aren’t working in a project at Skidmore and the excuse is ‘well this is just how the industry is,’ that is actually pretty moot because the industry is hurting people. We all have the ability to imagine the perfect room and the perfect process so we should just do that. At the end of the day, you’re making a play. It just must be fun. You’re not going to really make money doing it, so make it really fun and fill the room with people you love and make a very good thing because you’re spending all that time doing it so it should be a blast.”

Thank you, Zoe. We can’t wait to see where your adventure takes you next! 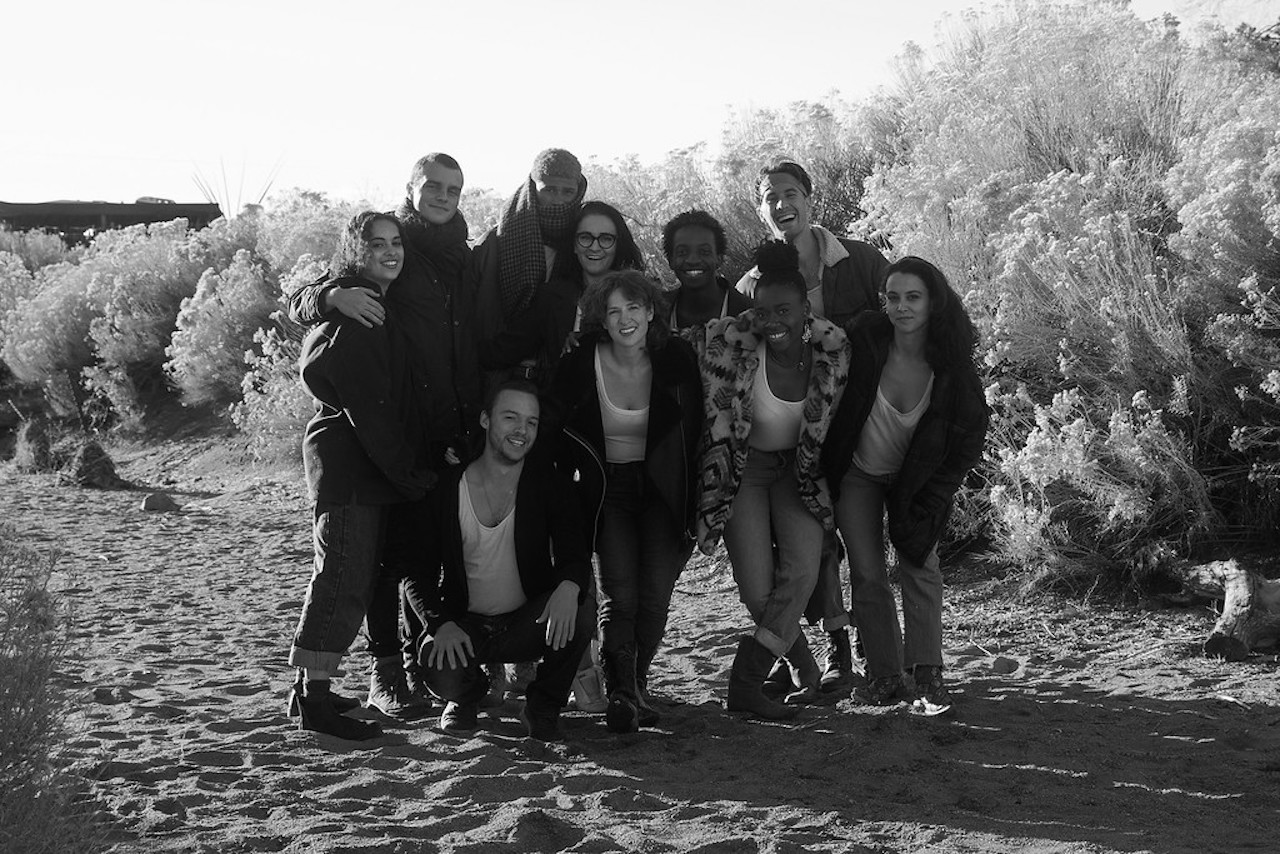 Zoe Lesser ’19 (left) and the members of the Exodus Ensemble [Photo by Gracie Meier].

Check out the website for the Exodus Ensemble and consider making a contribution to support new artists and their work.