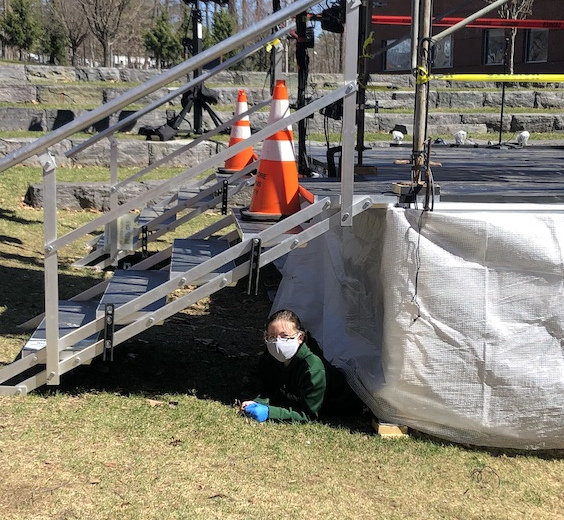 There were many key players in SpringFest’s success. I could truly have interviewed any of the 150 individuals involved in the festival and learned about the tremendous effort that each and every one of them put into making this event a success. To put a button on SpringFest and our year of triumph in the face of so much adversity, I decided to check in with senior Taylor Jaskula ‘21 to learn more about the festival from her perspective as a Production Stage Manager.

Taylor Jaskula: I feel mixed emotions in a lot of ways. There’s a little bit of a… it’s not relief but it’s kind of like a breathing for the first time in months. The last five weeks especially have been extremely busy in terms of coordination and just trying to keep everything going against every single obstacle. Also being able to sleep and wake up and have the first email or text I see in the morning not be SpringFest related and the last thing I see before I go to bed at night not be SpringFest related is really fantastic. But in terms of how the experience was for me, it was absolutely amazing. Even with all of the stress, paperwork, emails, calls, all of that stuff, I wouldn’t have traded anything for this. I learned so much.

EK: Yeah and there were so many moments of difficulty. Just hearing about all of the little things that were just… you never knew what was going to come next! From level changes to thunder and rain, it was just crazy.

TJ: Yeah there were so many unknowns that we can’t control. In our job [PSM], we try and fix problems and mitigate risks and mitigate issues before they even arise. There’s a lot of forethought that goes into it, so we try and be aware of potential challenges before they occur or fix them before they’re even mentioned. But when you have things like being amidst a global pandemic and also outdoor theater, you can no longer control those variables. You just have to do your best to try and plan for every single alternative.

EK: Going back to how SpringFest was a wonderful experience for you, what was your favorite role that you took on within your multitude of roles?

TJ: So Production Stage Manager is an interesting title because you can take on roles and responsibilities similar to a Stage Manager in terms of paperwork, organization, sending out emails, stuff like that. But for PSM, you’re much more engulfed in the world of actually building the stages and planning every detail from scenic to sound to lighting to all of the other production elements. 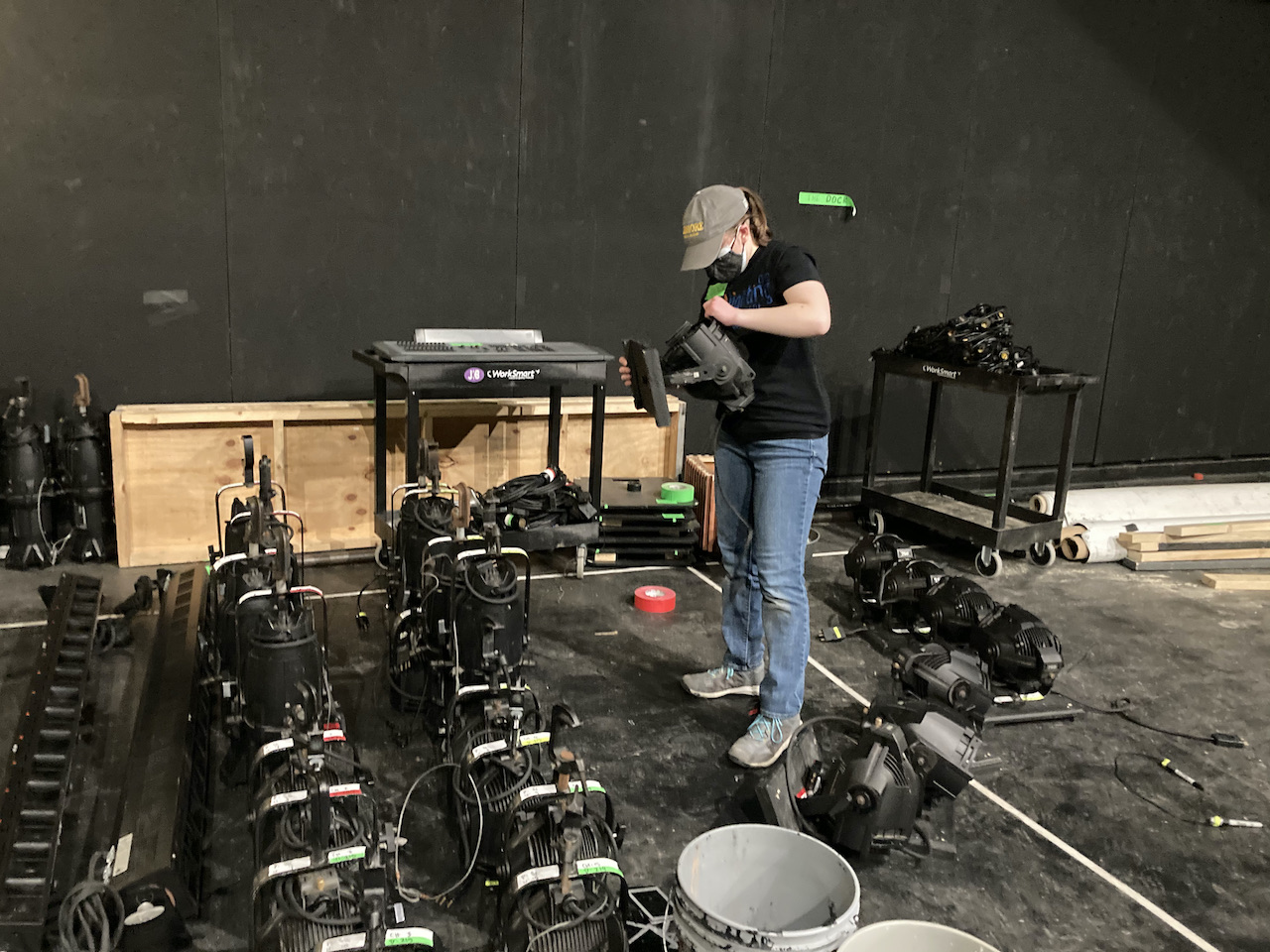 TJ (cont): For me personally, my favorite subset of that was all of the lighting work that I ended up doing. I also functioned as the Master Electrician of the festival and trying to figure out how to make all of that work outdoors was a real puzzle. I get really excited over those small moments where I am sitting at home trying to plan stuff out and I go through it and I get a little bit into it and I’m like oh that’s not going to work, oh I gotta back up and try again to make this plan happen or put these lights here or get power where power doesn’t exist. Planning all of that stuff out and to finally get it on paper and be like okay, I feel good about this was great. But then we didn’t just leave it on paper; it wasn’t like a class project. After it was done, we took that and made it a thing. We watched it happen and to see it go from its initial inception to up and working was my favorite part.

EK: On the flip side, what were generally some of the challenges with SpringFest as you saw them?

TJ: The scope was certainly one of the most ambitious things that this department has done, if not the most ambitious thing in recent years. And then you try and stack that on top of the fact that we are in a global pandemic and the fact that all 15 shows actually happened — every single show happened when it was supposed to and had full showings — the fact that we got to that point where we could fully produce 15 productions in whatever way those Lead Artists saw and envisioned with the resources that we had, with the small crew that we had, was outstanding.

TJ (cont): But that in and of itself was one of the biggest challenges — how do we do this for 15 shows. The constant changing was a big challenge, and that was not something that we could address. We coordinated with so many different departments, and every single department that we coordinated with was more than gracious. Because there were five shows in a weekend, if we moved one show, we were generally moving two or three others to jigsaw them all around each other and, when you have that many different people involved and that many different locations, moving something because of a conflict by the pond and moving something back might actually create a conflict at the amphitheater that did not exist prior. So one of the biggest challenges within the changes was keeping track of them across every single different alternative and if there were people who were acting in one show and designing in another, forget about it. It was like a very challenging puzzle. And we can do all of the planning and all of a sudden it rains! Maybe in terms of challenges that was one of the biggest ones, dealing with the unpredictable. We would get all set up and it would pour for 10 minutes and then right before the show it would stop. 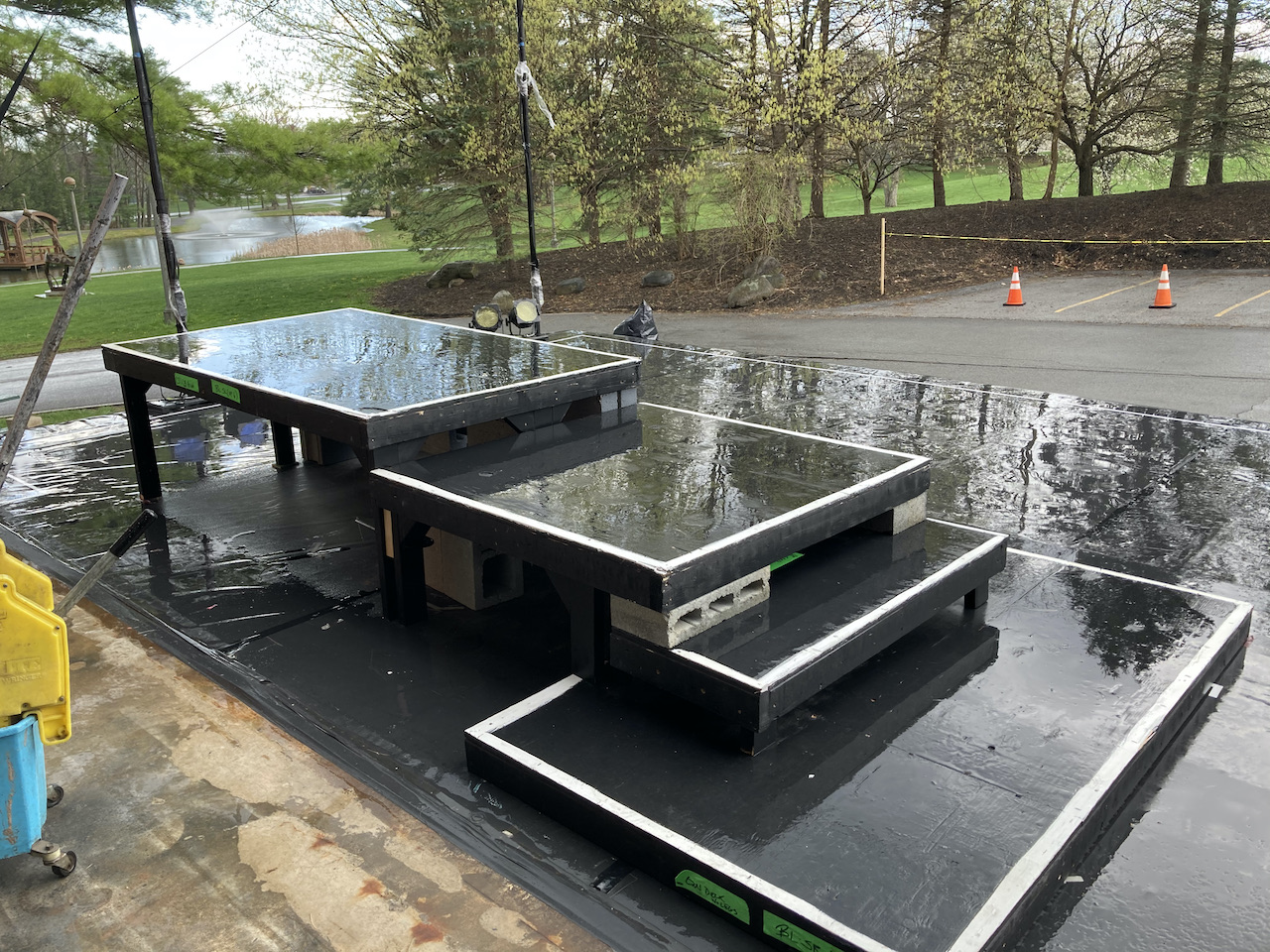 A view of the loading dock stage after rain, highlighting the challenges of outdoor theater. (Photo courtesy of Taylor Jaskula ’21)

EK: Yeah I heard about how Frozen Fluid actually had to call hold to clear the stage so it would be safe for the actors.

TJ: Yeah that night, the fact that we got a show up that night… it was very wet! The lighting instruments at the amphitheater, a lot of them were what is called IP65 rated which means they are more or less waterproof. So we felt comfortable with the equipment that we had out to try and push through it if the audience was okay and the actors were okay but it’s so hard to move on a slippery surface so we held for 10 minutes, a very brief “intermission,” and then Jared [Klein] and I actually jumped onto the stage with squeegees and threw like a hundred gallons of water off the stage!

EK: Say that Skidmore Theater wanted to do another festival in the future. What is some advice that you have for a future Skidmore festival?

TJ: I think maybe reducing it in some way. We did it, and it was amazing, it was impressive. But it might not be a bad idea to just scale back slightly in terms of length of time, like two weekends worth instead of three, or number of productions. Because, by the time we got to the third weekend and had been going and going and going, it was like doing three weeks of back to back tech on multiple productions. I would love to do it when it was a little warmer out, but Saratoga weather is something that you could never predict. But I would absolutely do another outdoor festival. 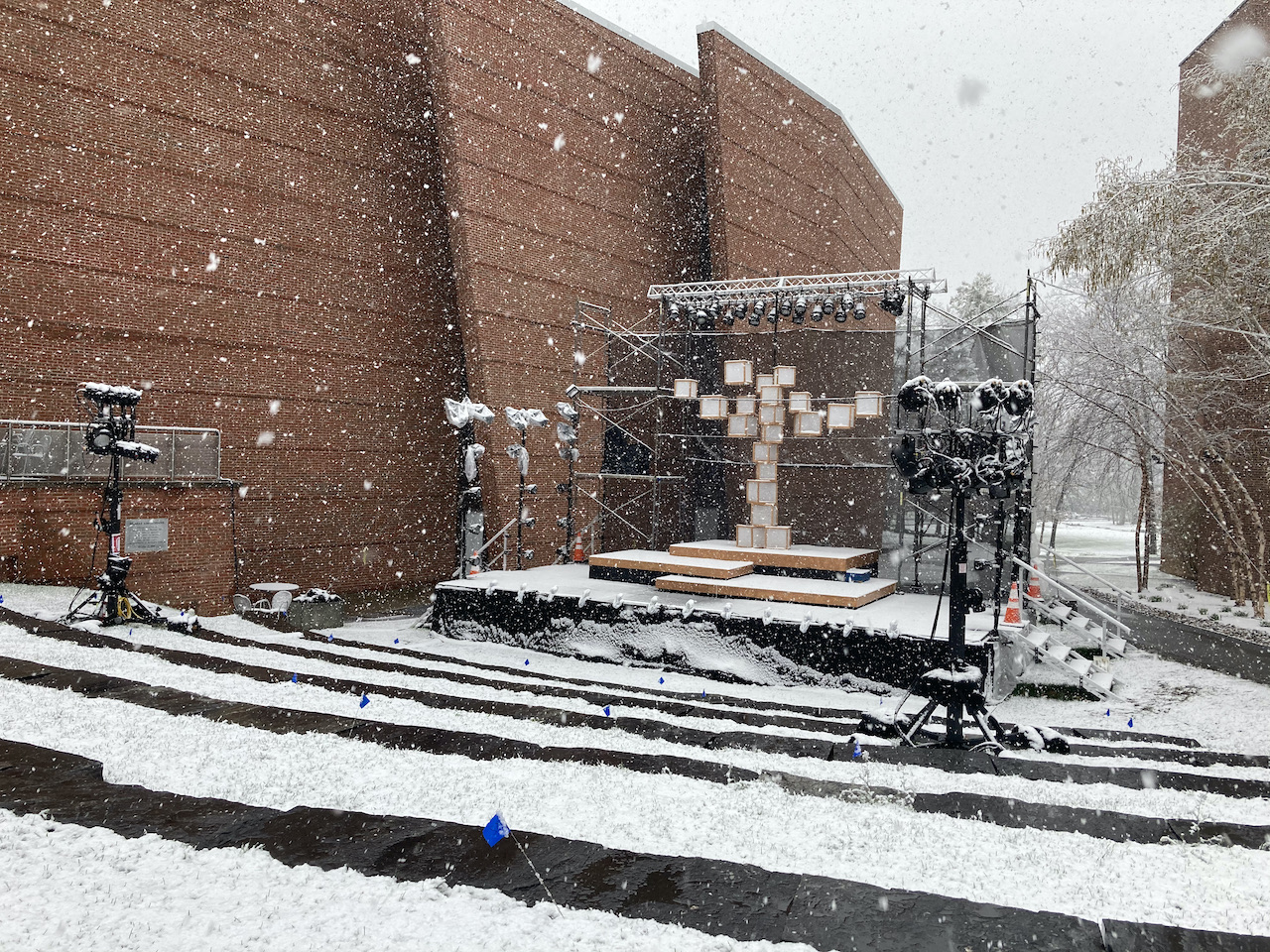 A photo captured when it rained in late April and covered the amphitheater stage and set in snow. (Photo courtesy of Taylor Jaskula ’21)

TJ (cont): SpringFest as a model was about giving opportunities to people who had not had that opportunity before and giving an opportunity to everyone to try something that they had not done. Which is absolutely fantastic but if you haven’t served in that role before, you might not even know the questions to ask to get the help and support that you need. With 15 shows, it’s hard for the three or four people who are overseeing everything to be in every production meeting, be in every rehearsal, and try and help.

EK: Yeah that’s an interesting point because part of the mission of the festival was to strive for more equitable theater-making and have every production be on equal playing ground but I also still think that it’s tough when you have a production of predominantly new people who are doing new roles and then there’s not really the staff to help them or the upper class people as leaders to be on their team, so I’m wondering in the future how they would go about that.

TJ: If I got to do this again, that would definitely be something I would try and figure out how to do better.

EK: What are your plans for what’s next? What are you up to this summer or beyond if you know now?

TJ: I know that grad school is in my future at some point. I love teaching — I’ve always had a passion for it and I’ve always been of the mindset of if I have learned something, just me having that knowledge is not going to serve anybody. If I can teach just one person who might be interested and I have the capacity to, I should. I try to do that always. So in the future, I’m hoping that is somewhere in whatever I wind up doing.

EK: Do you have any final thoughts that you would like to get out there?

TJ: It was just a monumental task but there was also a lot of help. I might have done a lot of the scheduling or the emails or the coordination but I could not have done it without the entire team of people and was happy just to play a part in getting this thing together.