Becoming Othello: A Black Girl’s Journey written and performed by Debra Ann Byrd was a powerful, emotional example of what it means to bring your full self to the stage. Through the lens of her transformative experience playing Othello in the Harlem Shakespeare Festival’s all-women production of the play with the same title, we are transported to different traumatic, thrilling, or exciting moments in Byrd’s life. 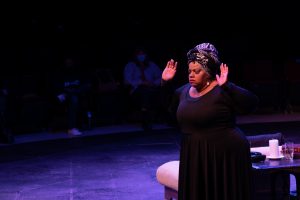 I was really struck by the scarf Byrd would bring with her when she would travel on stage. She began the show with the scarf on her head, and, by the end of the introductory chant, she removed it and took it with her as she walked throughout the space. Each time Byrd would begin a new beat in the piece, the scarf came with her. This was a very powerful visual moment in the piece, as it seemed to represent Byrd’s connection to the spirits of her ancestors that she evoked in the beginning. No matter what the situation, Byrd carried her ancestor’s influence with her, just as she carried the scarf. 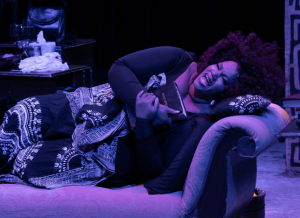 Debra Ann Byrd transforming the headscarf into a blanket

The way Byrd seamlessly melded her own text with the traditional Shakespeare text was one of my favorite elements of the piece. As a theater student who has read Shakespeare plays for the past four years, I loved being able to use my knowledge to differentiate between the texts; however, what was most exciting to me was that, sometimes, I couldn’t tell the difference. When Byrd began talking about how some of her acting professors told her she couldn’t perform the classics professionally, I thought back to some of the moments where I couldn’t tell if she was speaking her text or Shakespeare and chuckled to myself. Not only can Byrd act Shakespeare, but she also has such a deep understanding of the texts that she can smoothly transition from her own text to the classical. Of course Byrd can perform the classics professionally, and the seamless juxtaposition of Shakespeare’s words with her own only further emphasizes the ridiculousness of that statement. 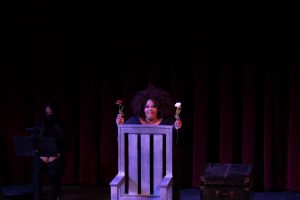 This piece, at its core, is about finding happiness when things around you seem hopeless. Byrd moves us through her life story, filled with peaks and valleys, gracefully allowing the audience to experience both her pain and joy.