The Case walkway, frequently just a pass-through for students between classes, took on an entirely new role in Micah Pflaum’s production of Philip Glass Buys a Loaf of Bread. The David Ives one-act was performed on location, set at an unnamed, unspecific bakery. The short play, performed by Finn Hogan ’23, Erin Einzig ’23, Sophie Kelly’25, Ellery Shea ’25, begins completely normally when Philip Glass enters the bakery and encounters an old love of his. Immediately, the audience is whisked out of realism by the ring of a bell and introduced to a musical vignette, reminiscent of composer Philip Glass’s minimalist style. 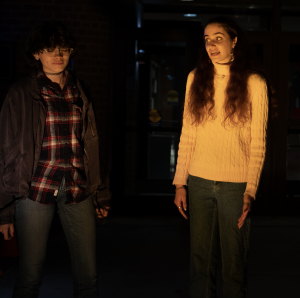 What follows is a highly rhythmic, fast-paced section filled with repetition of different words and phrases, some of which are nonsensical and silly, suggesting the internal thoughts of Glass when encountering his old lover, but others which carry great philosophical weight, like “TIME IS MOMENT.” The piece is then bookended once more with the ring of the bell at the bakery, and the audience is brought back to a world more similar to reality. Glass encounters his old love, and the play ends. The play engages in themes of love and happiness, as the “bread” becomes a metaphor for Glass’s life in a way, something he and the ensemble always resort back to in incomprehensible rhythmic language. 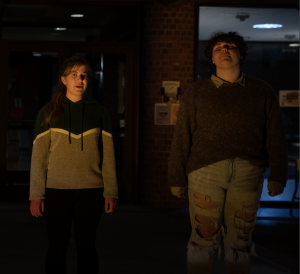 Pflaum understood this play exactly for what it is, staying true to the text, which truly anchors the piece. The production was illuminated only by two small lights on the patio of the Case Center, creating only two atmospheres – light and darkness. This feeds into the play’s portrayal of duality— a mind racing while standing still. The movement of the piece was kept relatively simple but was still effective and important in a piece that is driven by rhythm and timing.

The play, while simply being centered around the transaction of a loaf of bread, holds so much complexity within its four-minute run time. The piece reveals so much about the human emotional state, maybe even more so than a more “rational” and realistic dialogue could. 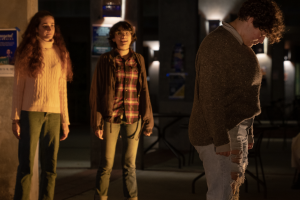 Jonah Harrison ’22 is the General Manager of the Skidmore Theater