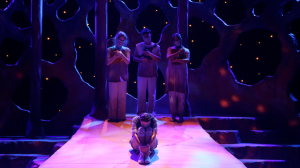 On November 19, 2021, it was opening night for SOMEWHERE: A Primer for the End of Days by Marisela Treviño Orta, our first show on the mainstage since Radium Girls closed on March 5 last year.

The audience is thrown into a dystopia where all the insects in the world have disappeared. Because there are no insects to act as pollinators, crops are beginning to die, and the world’s food supply is extremely limited. As a result, people are on edge as they desperately try to grasp onto the last of whatever normality remains in their lives. Everything seems hopeless until Cassandra, an entomologist, discovers a kaleidoscope of monarch butterflies hatching in her laboratory. Cassandra, along with her brother Alexander, decides to follow the new migratory pattern of these butterflies, even if it means biking across the country for days, weeks, or months. During their journey, their paths intersect with a group of individuals who have been seeking refuge in a dying truffle farm and are closed off from the rest of the world: Corin, Diana, Eph, and Sybil.

Although life at the farm is a little dull, they have been able to maintain a stable food supply. That is until the fungus armillaria ostoyae begin to feed on their supply, like a parasite. At some point, the butterflies lead Cassandra and Alexander to Corin’s truffle farm. After a poor first impression, Corin, Diana, Eph, and Sybil decide to let the siblings stay on the farm to study the butterflies, as long as Cassandra and Alexander help deal with the fungus that is killing off the trees and their food supply. 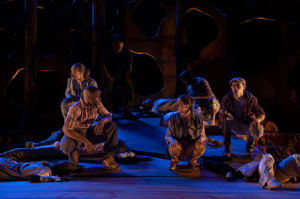 As the men attempt to pull out the fungus, Corin cuts himself and gets infected by it. To make matters worse, Sybil kicks the siblings out of the farm at the same time Cassandra falls ill. This angers Diana, and she gets into a fight with Sybil. At the end of it, Sybil reveals that she and Eph have been trying to have a baby and build a future together, even if the world has gone mad. Despite Sybil’s pleas, Diana decides to leave the farm with Alexander and Cassandra. 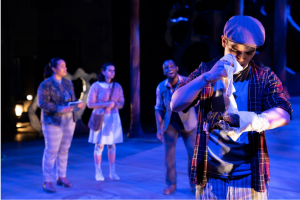 Towards the end of the play, Corin’s body is completely taken over by the mycelium and he transforms into an entirely new being. Although Sybil wishes to go after her sister Diana, she and Eph know very well that they cannot leave their friend alone in his time of need during his very last moments alive. On the other hand, Cassandra has an entirely different change, achieving ascension with the help of monarch butterflies. The characters left behind are now tasked with creating new meaning for themselves, as they navigate their next steps a little differently, feeling the absence of those who have transformed and left them behind.

From the monarch butterflies to the garden entities, to the mycelium, every living being in the production has an active consciousness and makes choices that impact the course of events in the play. For example, the monarch butterflies chose to aid Cassandra in ascension. The garden entities allowed Diana to bury various items, along with her secrets in them. The mycelium chose to meld, mix, envelop, and become one with Corin at the end of the play, after bringing him home to the truffle farm. The manifestations are present in every scene and have formed solid relationships with the humans in the play, even if the humans themselves are not fully aware of their presence. With the help of the movement director, Teisha Duncan, the manifestations are seamlessly embedded into the world of play. 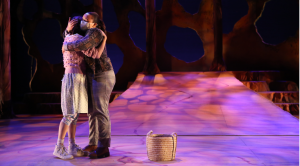 Diana (Kathryn Stathakis ‘22) and Sybil (Sophia Paulino-Adames) have a heartbreaking farewell, not knowing if they will see each other again after this.

The production seamlessly melds theater and climate change not just in the content of the play, but also in its design elements. Guest puppet designer Lexy Ho-Thai designed the gloves of the chorus and will be repurposing the butterfly gloves for her next project. This brings forth the idea of environmentally-conscious theater, and how we can reuse items from previous projects, and create a line of continuation for them, connecting the different worlds it touches and is placed in.

Orta leaves many questions left unanswered: Where are the butterflies headed? Will the world ever recover? What happens to those who merge with nature, with the mycelium or butterflies? How are their mergers chosen? Will Sybil and Diana ever be reunited? What are Alexander and Diana’s next steps? Are Sybil and Eph going to be able to have a kid? And if they do, how will they care for them? We may not have the answers, but one thing is for sure: SOMEWHERE: The Primer for the End of Days is an entrancing play that beautifully marries theater, climate change, Greek mythology, and immigration. It emphasizes how important it is to care for our fellow human beings; how sometimes, we have to make difficult choices that may hurt others; that we will have to undergo excruciating journeys to end up where we were meant to be. And most importantly, it teaches us that even in the direst of circumstances, it is still possible to find purpose and joy.